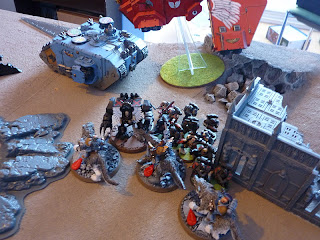 Having decided to return to the Space Wolves for Blog Wars 2 I needed more practice with the list I've come up with. Jamie (Index Astartes) was happy to oblige.


Game 1 (Scenario 1): Space Wolves vs Blood Angels
Jamie had put together a nasty 6 dreadnoughts BA list with a large death company and reclusiarch in a storm raven. I'd been wanting to see what a dread heavy list would be like so I was quite interested to see how I'd fair.

With drop pods hurtling down from the skies delivering various flavours of dreadnought I'd have to be pretty lucky with my shooting to take enough of them down. My two "death star" units namely Arjac with terminators and thunderlord with TWC would both have a good chance in combat with a dread thanks to S5 rending and S10 fists from the wolves and S10 hammer and S8 chainfist from the terminators. Unfortunately the wolf lord found himself charged by the death company and thanks to a combination of Furious Charge and re-rolls to hit and wound I simply had too many saving throws to take. The mighty thunderwolves were easily cut down. 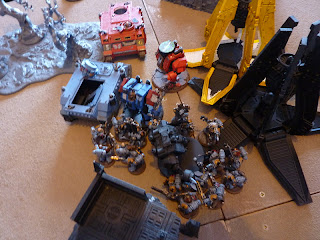 No problem I thought, Arjac and the terminators should sort them out. My shooting killed off a handful of the death company and I was able to drag their storm raven and DC dread into combat as well. I had some attrocious saving rolls though and only Arjac and the chain fist were left standing. The chain fist fluffed his damage table rolls and could only rip a weapon from the storm raven and Arjac had a single save to make before he could strike at the dread. Sure enough he failed it and I was left with very little to harm Jamie's army.

The grey hunters put up a valiant resistance taking down 3 of the dreads and thinning out an assault squad but it was too late to make any difference.

Game 2 (Scenario 3) - Dark Eldar vs Imperial Fists
In order to mix things up a bit I decided to play the second game with my Dark Eldar. I'll post a full report of the game over on my DE blog Kabalite when I get chance.

Game 3 (Scenario 2) - Space Wolves vs White Scars
Another interesting match up (which I forgot to take pictures of!) against a predictably biker heavy white scars army. Jamie elected to keep his entire force in reserve and with a lot of troop units I'd have a lot of work to do. I positioned my forces in the centre of the board and waited to see where Jamie's outflanking bikers would emerge. The first squad to arrive came in within charge range of one of my Grey Hunter packs so they were pretty easily cut down for miminal losses on my part. The rhino full of tactical marines that came in behind them was blown up by the long fangs.

The tactical squad charged the Grey Hunter pack leading to a protracted combat where I couldn't seem to get enough of them killed to gain an edge. Elsewhere attack bikes arrived and I was unlucky not to kill both of them with krak missiles from the long fangs. On the other flank Kor'sarro Khan arrived with a larger biker squad. I elected to use one of my Grey Hunter packs to rapid fire them in the hopes of thinning them out for my terminators later on. Although I was lucky enough to kill a few of them thanks to poor rolling from Jamie, it left my grey hunters exposed. The librarian lined them up for the AP3 flamer power (I forget the name) and that combined with shooting from the rest of the bikers obliterated the squad.

The thunderwolves charged into combat with Khan and with me trying out Saga of the Warrior Born (instead of Bear) I lost my thunderlord to Khan's roll a 6 instant death in the second round of the combat. Luckily the wolves had done enough though and the power fist returned the favour to Khan. The terminators had spent several turns trying to get into range of the new arrivals and finally got to gun down some scouts.

With time fading fast we assessed the situation. One of the two uncontested quarters had seen the Khan combats but was now empty and the other had long fangs in who'd seen off a land speeder that threatended to kill them. In one of the other two quarters a single wolf guard with fist was up against the sergeant from the tactical squad who also had a fist. It would be a simple roll off to determine if one or both of them would survive. I fluffed both of my attacks and Jamie got one of his through leaving the quarter in White Scar control.

My only hopes for a draw were to either get my thunderwolves into Jamie's quarter and contest it or for the terminators to kill of a tactical squad and land speeder before the clock ran down. Unfortunately the game ended on turn 5 so we never got to find out.

Conclusion
The first game wasn't really a true test of the list as I'm unlikely to face a dread heavy list in a tournament (since it'd be useless in objective games with only one scoring unit). I should've left the death company alone once they'd killed the thunderwolves and used Arjac to aid the grey hunters in the centre of the board who'd got a pile of dreads to deal with. My attempts to stop the DC, DC dread and stormraven with a single charge were ambitious at best and I think I spread myself too thinly.

The other SW game highlighted the fact that my current list simply doesn't have enough troop units and lacks mobility. Faster armies would be able to pick and choose where they attacked and I'd be chasing them around for the entire game. It didn't help that I sacrificed one grey hunter pack to Khan's librarian unnecessarily!

I need to go back to the drawing board with the list and try and either gain some mobility or be able to stop my opponent more easily. There's a few problems though:

1. I like Arjac's unit as they are and the LR Redeemer is the best way to get them into the fight. Sadly it's a lot of points for a single unit at over 700pts!!
2. I totally love the thunderwolves models and I think they're scary to most opponents. It's a shame they're sooo expensive and a bit hit and miss.
3. Long Fangs are great but I find recently they've not been very effective. They're either out of range, can't see or simply fluff all their shots. The solution is to either take two squads of them or drop them entirely in favour of other anti-tank threats like wolf scouts or land speeders. Mind you they aren't what you'd call reliable either!

This is really my eternal problem when designing lists. I can see what I need to do to make the lists more competitive but at the same time I want to have fun using them. I could easily throw in more grey hunters and another long fang pack but I'd have to sacrifice the thunderwolves who I adore. I guess I'll have to decide whether it's more fun to actually win games than it is to see your opponents face when they get to charge!