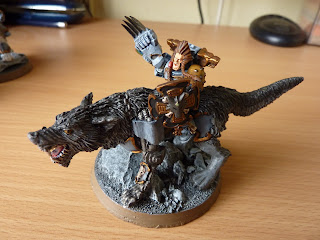 So Matt and I have just played through the Blog Wars 2 scenarios. We've played my Dark Eldar against his Blood Angels, a Grey Knight Draigowing and then his Blood Angels against my Space Wolves. We're pretty pleased with how the missions played out including the final mission which now seems to be reasonably balanced as far as we can tell. I'll do quick battle report of the three games before I talk about the decision I've got to make.

Game 1: Blood Angels vs Dark Eldar
Matt got first turn and promptly took out two raiders, immobilised the other two and then stunned both ravagers. I managed to bring down his stormraven but Lelith failed to wound Mephiston in combat (needing 6s is a bitch) and then eventually got chased from the board. His drop pod dread locked some witches in combat who managed to get some damage with haywires but never quite got the killer blow.

A combination of poisoned shooting and wrack assault brought Mephiston down to a single wound but not without losing both wrack squads (one ran off). Mephiston eventually killed himself with a dangerous terrain test though!! That was the only highlight in an eventual tabling where the sheer weight of fire and open toppedness meant I never really left my half of the board.

I should've reserved my entire army really and then any transports that came on could've blasted 24" and hoped the ravagers opened up a transport for them to assault the occupants in later turns. I spend too much effort trying to kill Mephiston for the 3 KPs and I was lucky that he died. Realistically Matt's list is probably the rock to my scissors but I played badly and poor luck didn't help. I'm pretty sure Matt would've taken the 8 TPs from this game (but we didn't sit and calculate it).

Game 2: Dark Eldar vs Grey Knights
Matt had a paladin blob, 2 psyflemans and a vindicare. He got the first turn again and learning my lesson from game 1 I reserved everything. I got the vast majority of my army in turn 2 and proceeded to take down one of his dreads. I opted to fire both venoms at the paladin blob but thanks to 2+ saves and FNP I only caused a single wound, should've shot the vindicare but you live and learn. Over the next few turns Matt killed two raiders, 2 ravagers and reduced one venom to a hull. One of the wych squads also fell to storm bolters and psycannons from the paladins. I killed off the vindicare with ease and the remaining dread over a couple of turns.

At the start of turn 5 I blasted my remaining vehicles into a position where I controlled 3 quarters and contested the one with the paladins in it. In turn 6 Matt would need to break off Draigo, the Librarian and the Techmarine in order to contest my quarters and force a draw, it would be nearly impossible for him to win. Luckily for me he rolled a 2 and there was no turn 6. This meant I'd got a health 3-0 victory but gave away a marginal VP win to him.

Game 3: Space Wolves vs Blood Angels
I finally won the roll off and got to be the attacker (we didn't do the TP thing cos we weren't using the same armies in the first 2 games). I'd put together a tasty SW list with Arjac as my compulsory Special Character. My first turn was disastrously poor with the lowlight being my long fangs missing with all 4 krak missiles. However, Matt had an equally poor turn 1 and I punished him for it in turn 2. His furioso had disembarked from the stormraven to kill my infiltrated scouts and a multi-melta shot from my land raider blew it up. The long fangs were luckier this time and blew up the storm raven and Arjac and friends killed his land raider meaning 570pts down the pan for Matt.

Arjac and co. were charged by assault marines but held out well killing all but the priest who ended up running. Mephiston killed my land raider but his other dread was bogged down in combat with some grey hunters with neither side able to end it. Arjac and co turned their attention to Mephiston managing to cause 3 wounds with plasma fire and then killing him off over two rounds of combat leaving Arjac standing alone. Over the next few turns Arjac killed a further assault squad (with librarian) after the thunderlord had softened them up. By the end of turn 6 I'd managed to table him to win the game. I'd have probably taken 8 TPs from that game. 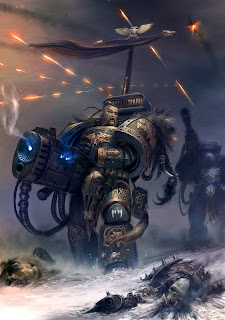 The Big Decision
I really enjoyed the last game playing Space Wolves again and this has caused a problem. I'd prefer to take them to Blog Wars 2 now instead of my Dark Eldar. This is for 3 reasons. Firstly because I've still not found my feet with DE and with only a couple of months to go I feel like I need to do a lot of tweaking to get a list I like and I'm comfortable playing with. Secondly, there's A LOT of painting to do to get my DE up to scratch in time for BW2. I'm changing my list again which means I've wasted time painting wracks when I should've been painting other stuff. I want to do the models justice and not rush the paint job and that means I won't have them ready for BW2 by a long shot. Finally, From The Fang is a Space Wolves blog and although I've started Kabalite (see the link on the right) for DE I don't feel like I did SW justice at the first Blog Wars.

In writing this post I think I've made my mind up. I'm going to put all my effort into painting Arjac to be an impressive centerpiece for my army and take SW. It'll let me take my time painting DE for some future tournament (did someone say Blog Wars 3?) and get to a point where I'm winning more consistently with them. It's a shame because I really like the models, the playstyle and the fact that they aren't just another MEQ army but with moving house I just won't have the time.

Time to get cracking on Arjac and write a nice post about painting and converting him methinks. Blog Wars 2 tickets are available on the right. I look forward to seeing you there!
Posted by From The Fang at 17:46:00