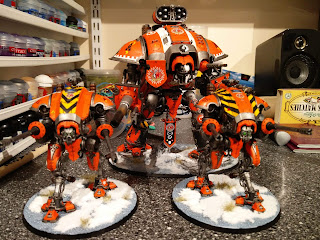 I was thrilled to be able to play in my last ever event. Not least because I'd spent a decent chunk of time in the run up to the event getting my army ready. My list was just about as simple as they come. An Imperial Knights list featuring two Armiger Helverins with meltaguns and a Knight Crusader with rapid fire battle cannon and an ironstorm missile launcher. The crusader was also my warlord so got the +1 to its invulnerable save and the Endless Fury upgrade to its gatling cannon.

Game One - IK & Wolves vs. CSM & Custodes
My partner Matthew Spencer had a mixture of grey hunters, thunderwolves and intercessors. Our opponents Dan Wellington and Callum Reed had cultists, a heldrake, two rhinos with CSM in one half and three jetbike shield captains and a walking one plus some terminators in the other. 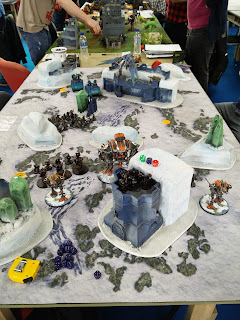 Our opponents took the first turn and forced us to deal with the cultists which the space wolves did fairly easily. That bought time for the CSM and shield captains to get involved though and slowly cut down the sons of Russ. 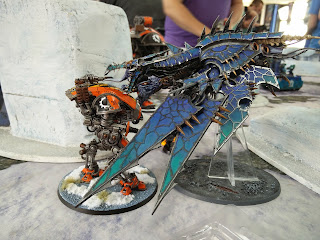 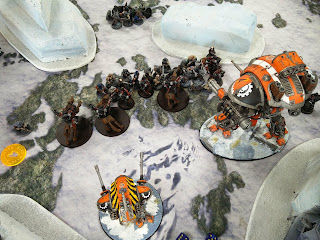 Elsewhere the Heldrake zoomed forward to flame the Wolves but fluffed its rolls. It managed to charge one of the Helverins though and despite not doing much damage it was able to force it to fall back and not do much of anything in for its first turn. There was really no reason for me to deploy them that far forward but it showed my lack of experience with this list (i.e. none!). 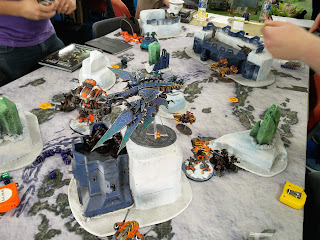 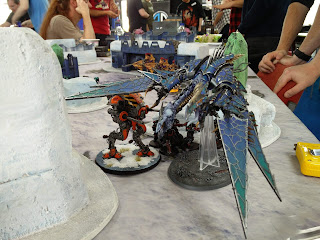 The other Helverin was more effective though unleashing a volley of fire at the Heldrake which would've downed it had our opponents not used a CP re-roll on an invulnerable save to keep it up in the air with three wounds. We put more fire into it but somehow it hung around. Eventually being taken down but not before soaking up a decent chunk of fire which was needed elsewhere. 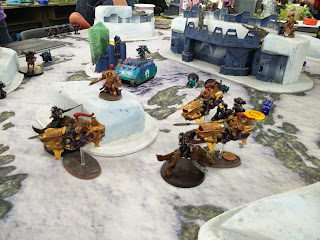 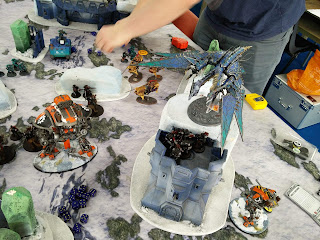 The Crusader easily downed a rhino with its first volley but failed on its second turn. It did wipe out a a squad of CSM with ease though. The terminators arrived in their third turn (they simply forgot them in their second) and smashed up a Helverin. It wasn't long before they dug into the second either. 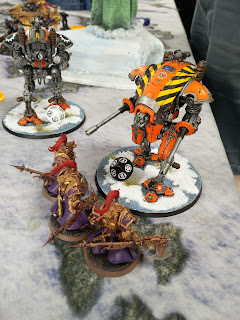 We finally managed to kill a shield captain with the last shot of the game but they'd taken down a big chunk of our force by this point. The Crusader was unscathed but little else was around to support it. Thanks to spending too much time chatting we ran out of time and ended after just three turns with a 13 VP 846 BP to 8 VP 796 BP scoreline. For a more competent battle report head to Dan's blog here

Game Two - IK & Ad Mech vs. Astra Militarum & Drukhari
A reunion of sorts in my second game. My partner Jamie Jackson used to be a regular opponent for me until he moved back down south and one of my opponents Nathaniel Gibbs (and his stunning Dark Carnival Drukhari) was a former partner at the original Double Trouble event. His partner Rob Nathan is a regular at my tournaments too. 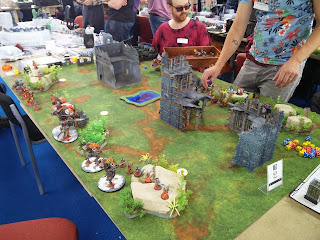 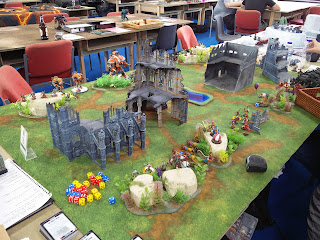 Once again our opponents got the first turn but we got away largely unscathed. A few wounds on the Crusader being the only real damage. Over our first few turns we mostly made short work of the Drukhari with the exception of the grotesques who withstood a huge amount of firepower before eventually falling. Their deaths weren't in vane though as they managed to hold up the knights pretty effectively. 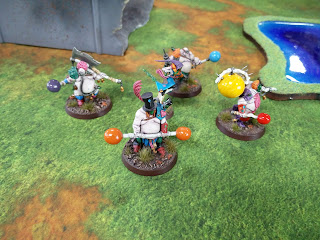 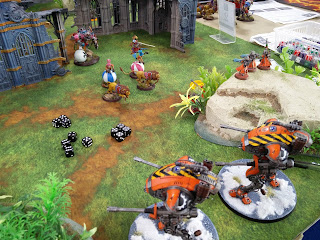 Thanks to a poor choice of deployment zone on our part, Rob's tanks were able to castle up nicely in the far corner and stay mostly out of range and line of sight for a good chunk of the game. With basilisks, a manticore and a wyvern, line of sight wasn't an issue for Rob who kept chipping away at our army from range. My knights made their way over to start trying to down some of the tanks but the crusader found itself struggling to avoid damage despite a further +1 to its invulnerable save from stratagems. Somehow it clung on to a final wound though which I thought would be enough to allow it to still destroy some vehicles. That was until Rob discovered some of the conscripts were in lasgun range. I think you can guess what's coming. A single conscript managed to hit on a six, wound on a six and, predictably, I failed my armour save with a one! 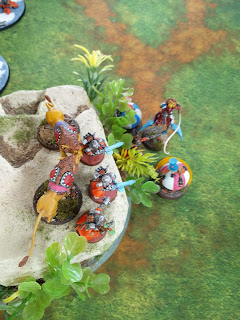 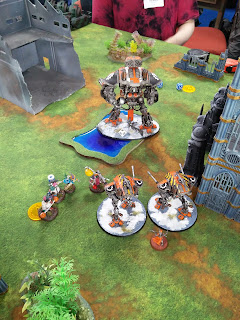 Meanwhile, Jamie mopped up as much of the Drukhari as he could see despite the Mandrakes giving him pause. The Helverins, unperturbed by their big brother falling to lasgun fire, made their away around the ruins to bring their autocannons to bear on the tanks. As they made their way in they also took fire. With the game coming to a close I decided to get a little greedy and split up their fire to try to kill all of the remaining tanks. Two basilisks and the manticore remained and I was frustrated to see them all survive on a single wound. Since this was the last turn I decided to charge in with both Armigers despite one having a solitary wound remaining. 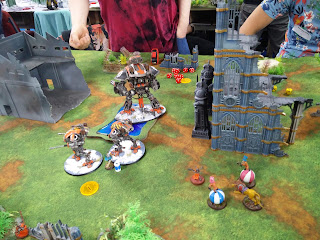 What followed was easily my highlight of the day. With what should've been the last roll of the game, the manticore exploded taking out both basilisks. Neither basilisk exploded but the Helverin did and the combination of the two explosions took out an unsuspecting Commissar Yarrick who'd foolishly decided to hang out between the tanks! Awesome! 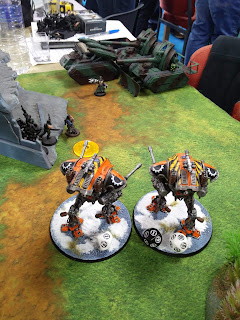 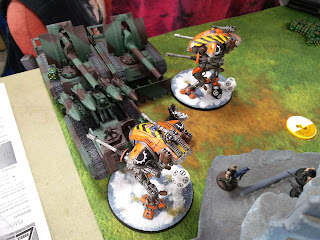 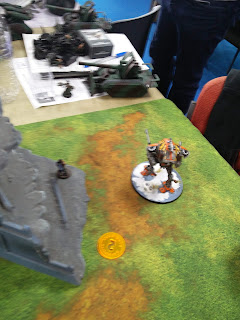 Game Three - IK & Death Guard vs. IK & Blood Angels
I'd played against Jonathan Lyness at DT3 and he'd returned with the same DG list this time. I realise at this point that I never finished my DT3 battle report post!! Anyway, I've never had the pleasure of playing Dave Weston, despite multiple appearances at my events, so I was pleased to find myself opposite him and Tom Capper's Blood Angels in my final game. 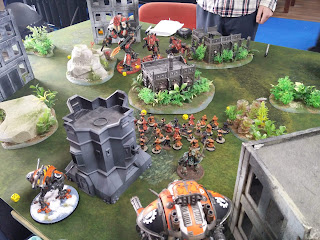 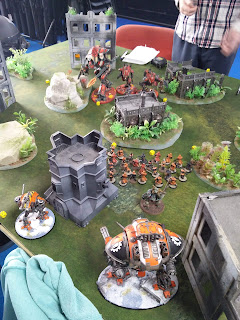 Well, that was until I realised how far the Cerastus Lancer could move! A huge 2D6 advance plus the Full Tilt stratagem meant early in-fighting between Dave's House Raven Lancer and one of my House Raven Helverins. The Helverin was pulverised without much effort and the Lancer became priority target for my Knights. 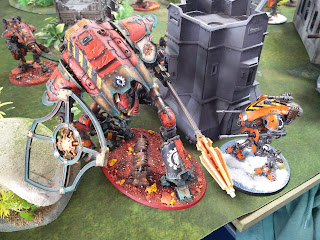 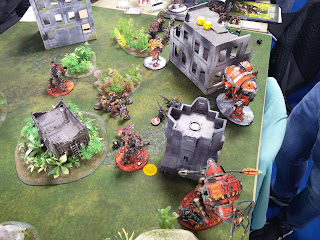 Elsewhere the Death Guard and Blood Angels has a big melee in the middle between the cultists and  Astorath and the sanguinary guard. The Daemon prince didn't do as well as we'd hoped against Mephiston but still did enough to get rid of him in the end. The blight drones did most of the heavy lifting in the midfield taking on the warglaives and holding them up to keep my Helverin alive. 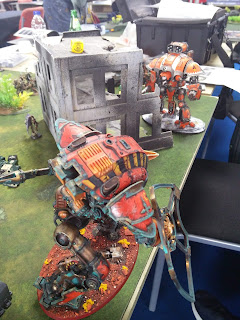 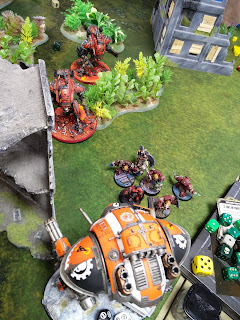 Whilst all this was going on my Crusader was backing itself into a corner whilst it tried to down the Lancer. Thanks to a snake eyes advance roll, Dave found himself outside charge range which proved fatal for his knight. The Crusader could then turn its attention to the rest of the army. They certainly learned to fear it as it downed Astorath, both warglaives and the recently arrived terminators (who'd killed the second Helverin). It then finished off the sanguinary guard and priest to complete a tabling. 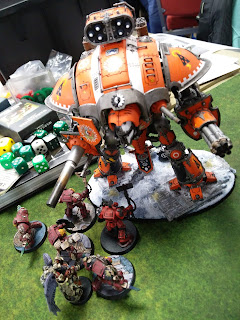 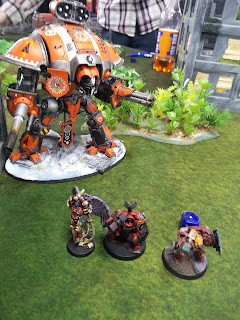 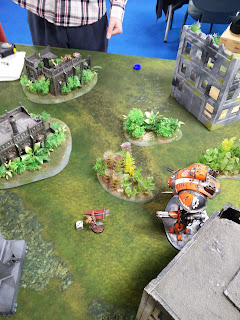 Since Dave was shy by a chunk of points we took a 6 VP, 1709 BP to 5 VP 916 BP victory. Enjoyable game though which could very easily have gone wrong has the Cerastus made it into combat with the Crusader. Again, you can find a more competent report on Dave's blog here

Conclusion
Ultimately a story of not getting first turn. We really screwed ourselves over with both our choice of deployment zone and our deployment in the second game but still, having the first turn in any of my games would've almost certainly given me much more comfortable games.

The knights played pretty much exactly as I thought they would. The Helverins can put out an impressive amount of firepower but what really makes them great is the flat 3 damage per shot. With the help of the Skyreaper Protocols stratagem one of them would've solo'd the Heldrake in the first game were it not for a command re-roll. The meltaguns were mostly a waste of points but it made the points bang on 875 and they did strip the odd wound here and there.

The Crusader was equally predictable. In one game it took on most of the opposing army solo whilst in another it was downed pretty cheaply. That's my main issue with the random damage for weapons. It mostly feels like luck whether or not the high wound units survive. Still some of the stratagems, particularly the Raven ones are insane.  For example, 1 CP for +1 invulnerable, 1 CP for re-roll to hit versus units with "FLY" and 2 CP to re-roll ALL 1s in the shooting phase!! The latter is particularly powerful especially with random shot number and random damage weapons.

I'm pretty sure this will be my last tournament play for the foreseeable future. I had such high hopes for 8th edition. It's such a huge improvement in a lot of ways and GW is certainly a much better company but I can't help but feel they still don't have it right. Personally I think the solution is to move away from a D6 system. There are just too many re-rolls to the point where your opponent can basically just announce they're re-rolling 1s and say it's a special rule or stratagem. In the old days I'd have challenged these things a lot more but it just seems like there's so much of this around that it's likely to be legit.

Don't get me wrong though. Game two in particular showed me that this game can still be dramatic and a lot of fun. The loss of a knight to a lasgun was hilarious as was the chain reaction of explosions to end the game.

I can't face the idea of selling any (more) of my armies. Perhaps when my son is older he'll be interested and I still enjoy the painting. Who knows?
Posted by From The Fang at 21:26:00