On Saturday I hosted my 15th and, sadly, final event. Double Trouble 4 was (not surprisingly) the fourth of the DT format. It hasn't really been that long since DT3 in June but I wanted to have one last event rather than ending abruptly. Unfortunately, I was limited on dates so I plumped for September 1st rather than a riskier date in November (close to my wife's due date). As a result a lot of the regulars were unable to attend as they were on holiday etc. Still, there were 28 players on the day who showed up with their 875pt armies eager to find out who'd they be partnered with and against in each round. I'm pleased to say my efforts on the "Helldoku" worked and every player managed to play with/against nine different people. Not only that but this time I made it so no-one had to play on the same table more than once! I'll not tell you how long that took me to figure out! Anyway, everyone showed up so that meant I was able to play in my final event too. More on my battles later. 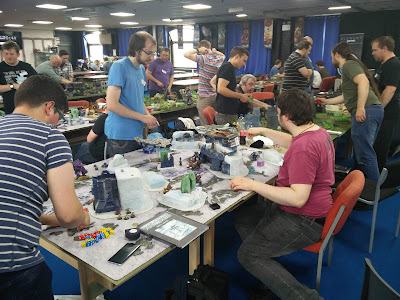 I was flattered how many people came to tell me how sad they were that I was hanging up my TO hat. Even some of the first timers expressed their regret that they'd not discovered my events sooner. When I started this out, with the original Blog Wars, I had no idea that I'd be here seven years later talking about my 15th! I've learnt a huge amount over those seven years and as a result I think it's important to pass on some tips to would-be TOs out there. I've spoken to WH Community before about writing a post for them but I never got around to it. I think now is definitely the time so watch this space.

I once again had a fantastic time and as ever gave away an obscene amount in the raffle. This time there were two top prizes of the Kill Team starter set and Tooth and Claw. I'm not sure how Dave Weston is going to explain his latest acquisition to the missus though!

Results
As usual, I'll do a rundown of the painting competition later in the week but here are the tournament results: 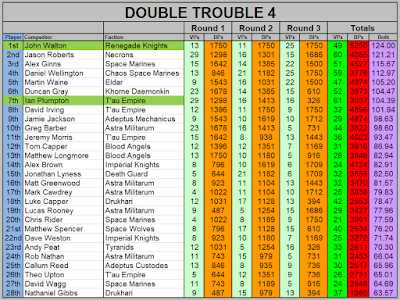 Clicking on the image should make it easier to read. As with all Double Trouble events, the positions are pretty meaningless as they're ranked according to best total score. The prizes are given for most VPs (Master Tactician) and most BPs (Genocidal Maniac). Ian Plumpton somehow managed to accrue 61 VPs (including a whopping 29 in his first game which I assume went to seven turns?!) to take the Master Tactician Award. The competition couldn't have been closer either as Jason Roberts was just a point behind (he'd been Ian's partner in round one) and Dan Wellington was just a point behind him! 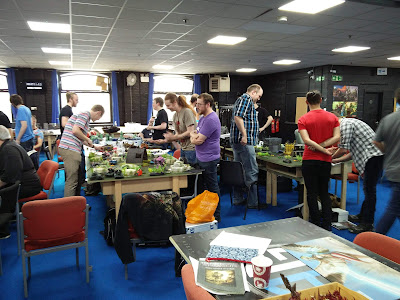 John Walton achieved a maximum BP score with three tablings for Genocidal Maniac. Perhaps his opponents were too busy admiring his stunning Renegade Knights to notice their models dying in swathes? 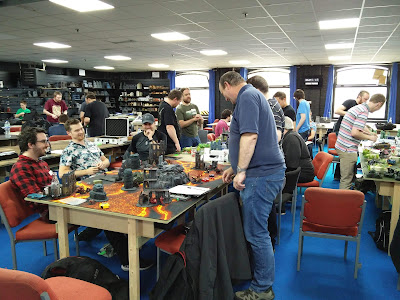 Finally, Nathaniel Gibbs took home the "Nobody Loves Me Award" for lowest combined score. I take a small amount of responsibility for this since I played him in the second game.

Look out for more posts later in the week with the painting competition results and my battle reports. I'd like to finish with a huge thank you to all of the guys who were at DT4 and to anyone who's been to my events over the last seven years. You lot have continued to prove that you don't have to be a tool at a tournament and that everyone can have fun whilst killing each others' armies! Friendly 40K tournaments are possible and I only hope someone will continue to run events in a similar spirit. Thank you again to Element Games for providing what I'm convinced is the best venue in the country (though I confess I've not sampled many).

Normally at this point I'd be telling you when the next event will be but there isn't one. It's up to you guys to pick up the baton!
Posted by From The Fang at 20:45:00