Well, that has to have been the worst list checking session I've ever done. Well, I say session, I've actually been at it for three nights since the deadline (I had Monday off!). I'd estimate I've spent about 8 hours on it. We've got 32 players in attendance this time so that's 15 minutes per list which isn't bad. Obviously some of the lists were significantly quicker to check than others (I'm looking at you, Guard players!). Anyway, thank you to everyone for submitting on time. Whilst it may have been the worst session yet it was definitely one of the easiest in terms of chasing people up for lists. There also haven't been many drop outs this time compared to previous events (still time yet I suppose!).

For those new to my events, a few years ago I started a tradition of meaningless statistical analysis of the submitted lists and I draw spurious conclusions from them in an attempt to convince myself that this was worth the effort!

Before I get into the usual pie charts I wanted to comment on the number of list errors I've encountered this time round. I think it's probably been the highest proportion ever. Something I think warrants a pie chart of its own: 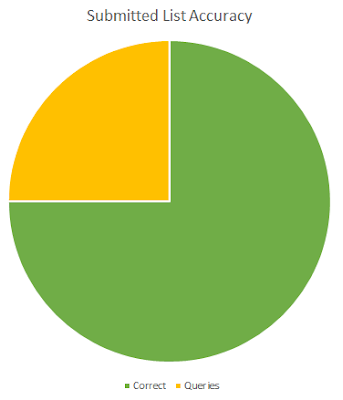 I was pretty worried after Saturday night when I checked 8 lists and found 4 of them to be incorrect in some way. I think it's important to point out that I'm not trying to have a dig at people but I'm more trying to highlight how difficult it is to get things right with the way GW have written out the points in the books. Of the 8 returned lists, only one of them was for restriction breach and it was an easy one to miss. There doesn't seem to be a particular trend to a bad faction or anything like that. I thought about doing a specific pie chart to show the incorrect factions but as you'll see later some of them only appear once so it'll be pretty obvious who they were and I don't think that's fair. Instead I've broken it down into Imperium, Chaos and Xenos: 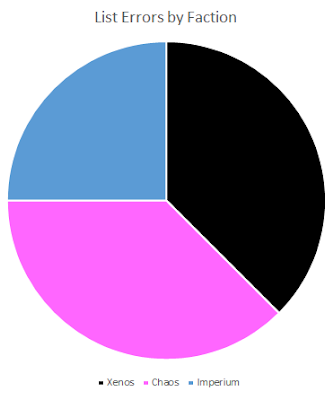 I don't really think there's a particular problem with any faction. The Astra Militarum lists were difficult but I suspect that's because Battlescribe isn't great for them and they naturally have a ton of units with low cost upgrades. Right, with that out of the way let's get onto the proper pies.

The Pie Charts
As is the tradition, let's start with the faction breakdown pie (click to enlarge if the text isn't clear): 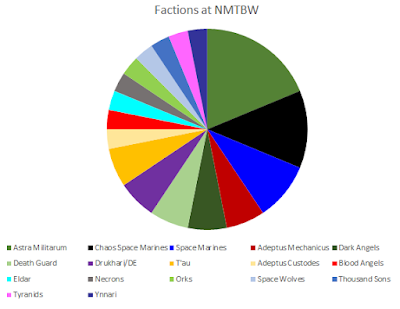 Well, unsurprisingly there's a sizeable chunk of Astra Militarum (IG) lists. Not all of these were pure Guard though with a smattering of Inquisition, Assassins, GK, etc. mixed into them. Still, the popular opinion that Guard are powerful at the moment seems to bear out in the popularity at NMTBW. It'll be interesting to see how they fare though. Of the other newer books, CSM have made a bit of a resurgence from being quite a niche army at previous events. Space Marines are still there in numbers but nothing like as much as before. In fact, power armour isn't as popular and only one of the lists (I think) had Primaris marines involved.

As ever, I'm thrilled that there's such a good spread of factions involved. In fact, with the exception of Death Guard and Genestealer Cults, every faction is represented in one way or another. I don't know about you but I think that's awesome. I'm pleased to see Harlequins making what I think is their first appearance at NMTBW.

There are no pure Daemons lists and only a couple of T'au lists. That's probably not surprising given the consensus of opinion about these two factions at the moment. Here's hoping their codexes address the issues. It'll be interesting to see how this changes with another year and hopefully a full complement of codexes.

Let's look now at the number of Imperium, Chaos and Xenos lists combined: 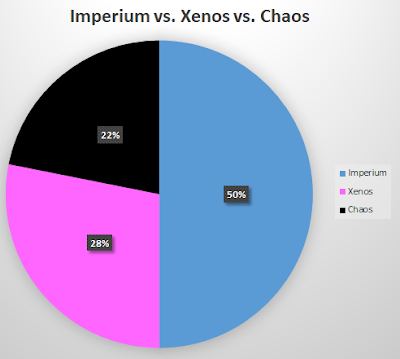 Firstly, ooooooo I discovered how to make these pie charts look flashier as I was making this one. No, I can't be arsed to go back and redo the others. Tough titties. Anyway, the flexibility of the Imperium over the other factions makes them a popular choice. It's difficult for non-Imperium players to feel cheated. Non-Aeldari xenos players could quite reasonably feel even more hard done to with just a single book to choose from. I'm semi-tempted to merge the results of the Imperium vs. "Everyone Else" since there's a 50:50 split but we'll see if I can be bothered on the day.

Lords of War
Next up, let's look at the number of Lords of War involved. With Forge World excluded and the 25 wound restriction there were only a limited number of options available. I hadn't realised that the Baneblade and its variants are 26 wounds until quite close to the deadline when someone pointed it out. I didn't intentionally exclude them whilst allowing other factions there's but still, I don't think Guard players need much help in the tank front. 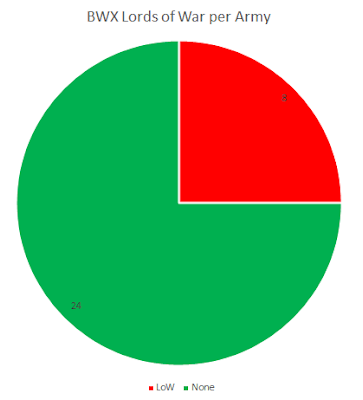 I'd already done these pies before I discovered the snazzify option so they look a bit crap now but they do the job. As you can see there's a quarter of the lists featuring a LoW but let's break it down: 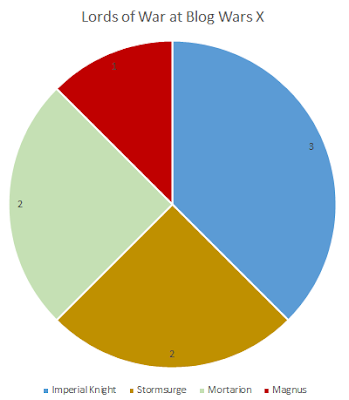 Unsurprisingly, both of the DG lists feature Mortarion and the Thousand Sons have brought Magnus along. I'm surprised there weren't more Imperial Knight as they're under the 25 wound cap and also (unless I've missed something) you could've brought 4 of them and stayed in the restrictions. I'm glad no-one has obviously but I thought someone would at least try it on! Have to say I considered it for my list to make my games quick but figured it'd be pretty miserable to play with and against. It's surprising that there's no Wraithknights but with only two Aeldari players it probably doesn't mean much. I do think they're overcosted though.

Detachments
One of the biggest changes in 8th was a standardised pool of detachments for all factions. Previous editions had this but in recent years we've had a lot of faction specific detachments and the Marmite of 40K, formations. The tournament restrictions allowed up to 3 unique detachments and people built their lists as follows: 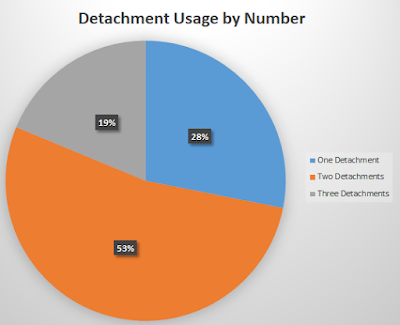 As you can see, the majority of lists needed two detachments to fill 2,000pts. The most popular combinations of two detachments being Battalion-Spearhead and Battalion-Super Heavy Auxillary closely followed by Battalion-Vanguard. I suspect this was generally a bid to gain a couple of extra command points as most of the lists could've been contained into a single Battalion detachment. Around a quarter of the lists used a single detachment and unsurprisingly the most popular by far was the Battalion. I suspect that's down to how used to the old CAD we'd become.

Let's take a more detailed look at the detachments used: 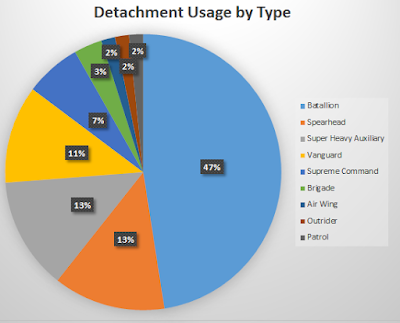 Of the 61 total detachments at NMTBW a whopping 29 of them are Battalions. Again, that's not really surprising. It's interesting that the Outrider, Patrol and Air Wing are barely used. It would seem that Elite and Heavy Support choices are more popular than Fast Attack! I'm also impressed that two players not only managed to fill a Brigade but also that they included other detachments too!! Obviously it goes without saying that these are Guard players!! I'ts also interesting to note at this point that only one player out of the 32 has made use of tactical reserves and even then only 100pts worth. Granted there aren't many Daemon or Tyranid lists but it's still interesting (to me at least!).

Special Characters
Finally, in a nod to the origins of this event in my previous tournament series, Blog Wars let's look at how many people have included Special (or Named) Characters in their lists. The reason I'm tracking this is because I used to have a somewhat unique comp at BW that required all lists to include a special character and I themed the missions around this. Interestingly, looking down the list of factions I think all of them could've included a named character of some description. Obviously some factions are pretty limited in options e.g. just Cawl for Ad Mech. Anyway, here's the pie: 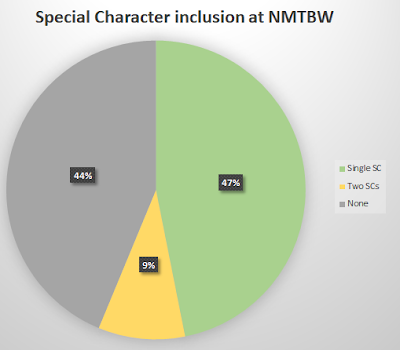 So more than half the lists included at least one SC without me making it compulsory. It'll be interesting to see how many SCs GW adds (or heaven forbid, removes) over the coming years but I remain a big fan of them. Looking down the list there's only two SCs who appear more than once, namely Pask and Mortarion. What surprises me more than anything is that Roboute Guilliman is a complete no-show leaving Chaos with 3 unopposed primarchs (albeit one of them twice). I really expected to see him at least once if not multiple times in the lists but he never appeared.

I keep intending to produce a list of all the Special Characters that have appeared over the years of my events and which have never been featured but I never quite get round to it.

Attendance
Finally, whilst not a pie chart I'd previously tracked attendance at my events so I took the opportunity to update the graph: 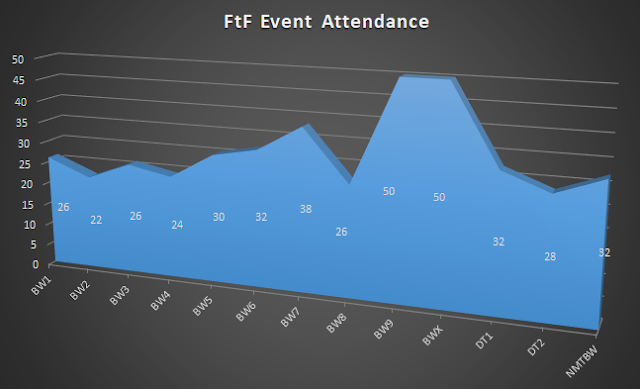 Well when you ignore the peak of Blog Wars in BW9 and BWX I've managed a pretty steady attendance of around 30 players. I'm pretty happy with that. I've always capped sales at 50 anyway as I think above this it gets unmanageable for a solo TO. I have to wonder if I'll ever get back to the peak of BW9 and BWX but perhaps the name is somewhat to blame. I really ought to come up with something that sounds a bit more like a 40K event and doesn't make people wonder if they need to blog to take part.

I have to say I'm feeling apathy towards the competitive 40K scene at the moment after the one experience I've had of it so far. Granted that's not a fair sample but the spam and filth still seems present and it doesn't seem like other TOs are doing too much to combat it. Mind you, GW is doing a much better job of "balancing" things at the moment.

Phew! That turned out to be a much more epic post than I intended. Fair play if you actually got to the end of it. Even more props if you actually read all my ramblings in between. I'm looking forward to the event and I'm intrigued to know if my somewhat excessive restrictions actually make for an enjoyable day of gaming. If nothing else about a third of the people there will win a prize so there'll be bribery at least!
Posted by From The Fang at 17:00:00