Yesterday I hosted my 13th 40K event, Nevermind the Blog Wars (NMTBW) at the Element Games North West Gaming Centre (EGNWGC for the acronym fans). Veterans of my events will remember that I killed off Blog Wars with Blog Wars X (BWX) in November 2015 so it's been two years since I've organised a singles 40K event. This was partly down to the complicated mess that 7th edition was and also to try to find more hobby time. Well, my armies haven't exactly transformed into beautifully painted masterworks so I figured, sod it, I may as well stick to what I'm good at and go back to event organisation! 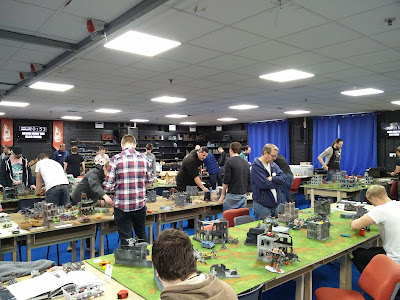 This was also my first event in 8th edition so there were a lot of things to think about. I tried to avoid over-complicating the day with custom objective cards like I've had in the past and kept the same combined mission in all three rounds. With the benefit of hindsight I probably went overboard with the restrictions but when I came up with them GW hadn't addressed things like flyer and conscript spam. Maybe this time next year 40K will be a balanced system with a robust ruleset and.... nope couldn't keep a straight face. We'll just have to wait and see how the codexes pan out.

Anyway, I kept a similar scoring system to that used at BWX with victory points converted into a tournament score which took into account the margin of victory.


Congratulations to Greg Barber for winning in his first appearance at one of my events. Equal congratulations to Matt Calow on scooping the Wooden Spoon. I think he was probably happier than he really should've been!

Well it doesn't take a genius to work out that Astra Militarum are pretty strong at the moment with 5 of the top 6 players using them! It probably also doesn't help that they've got so many cheap units that they can circumvent most comp. I'd love to hear from people who played with or against them, do you think they were too much? Is there anything I can do to counter this? 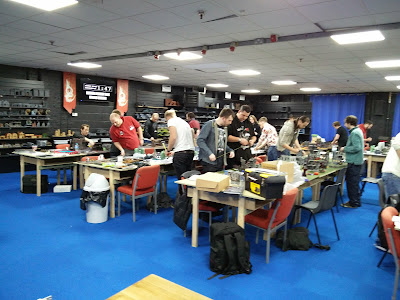 What's interesting is that if you compare the first round of NMTBW to BWX there were roughly the same percentage of tablings. It's usually more of a problem in round one as the random pairings make for some horrible mismatches at times. Swiss pairings only really started to improve things in the final round with just 3 tablings in the 15 matchups. Also, the victory margins were generally smaller too. It's something I've tried to figure out a solution to in the past but I think it's just something we have to accept as a problem with one-day events.

I know the scoring system is a little different to most events as it rewards margin of victory over pure VPs scored. If you re-sort the list on total points scored (Maelstrom and blood points combined), Chris Nettleship would win (4th) and there'd be big jumps for Mark Crombleholme (16th to 5th) and Nick Thrower (17th to 9th). Reassuringly the bottom three would remain the same though! Perhaps the system should be changed so it rewards "strength of schedule". That would probably mitigate the randomness of a one-day event but crushing your opponent would be pointless as you'd actually get less points! 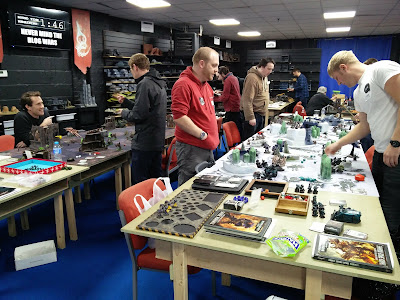 As ever, I'd love to know what you guys think about every aspect of the event. Did you like the scoring system? Did you feel penalised by it? How was the venue? Was there enough scenery? What about lunch? I'm particularly keen to hear about what you thought about round times and points level. I don't think people were getting many turns in in a lot of cases. I wish I'd put a box for it on the scorecards actually. Anyway, please let me know in the comments here, on the NMTBW/DT facebook page or by email.

I'd like to continue running singles events as that's where I started and they're still the core of the competitive 40K scene. The next NMTBW probably won't be called that. I think I need to come up with a new name entirely. I still have people asking if you had to blog to buy a ticket and the name doesn't exactly scream awesome 40K event. Still, I had fun ripping off the Never Mind the Buzzcocks logo. I'm open to suggestions for what my next event should be called. In fact I might even run a competition for it, well on the condition that no-one suggests Tournamenty McTournamentface (or something similar)! 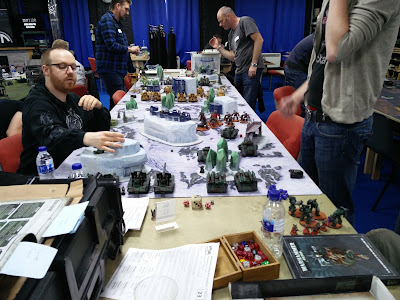 Don't worry though, I'll continue to run Double Trouble in June with DT3 (acronym overload) taking place on June 9th 2018 (save the date - tickets on sale in the new year). I'll have to have a think about how to handle 8th edition but stay tuned.

Also stay tuned for the painting competition and a report of my battles. All that's left for me to say is once again a big thank you to the guys who came along and particularly the folks who show up time and time again. I appreciate the support as always.
Posted by From The Fang at 10:06:00