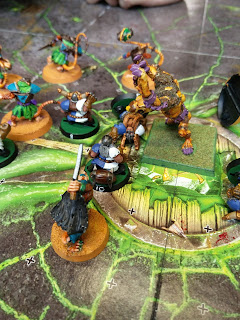 I managed to get in another couple of league games down at the Outpost in Sheffield last week. Both of which were rematches. The league allows teams to play each other a maximum of twice to avoid people playing too many games against the same opponents and racking up a silly number of league points. Both of these games were also against Skaven who are quickly becoming my nemesis!

Game Six vs. Martin Collins' Skaven
I hoping to get another game in before playing Martin again but the last game had been great fun so I didn't mind so much. The game couldn't really have started much better for me. The first half was almost a perfect half for a dwarf team. I managed injure two of his players, knock out three more and score an 8th turn touchdown even though I'd kicked off.

I did say "almost" perfect though. I got a little greedy on my final turn of the half and decided to try a foul which only managed to knock out his player and resulted in a sending off for me. Looking back I should've never bothered but I had a reserve and wanted the maximum numbers advantage in the second half. I then had a guy injured on Martin's final turn of the half and then to really top it off Martin managed to get all of his knocked out guys back (with help from the Bloodweiser Keg he'd got as a result of the stadium we were using). Turning what should've still been a decent numbers advantage into 10 players each. 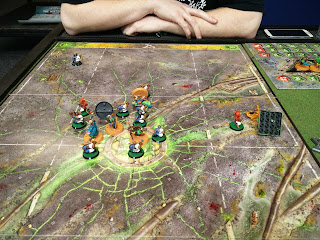 Nuffle was decidedly displeased with my foul play and punished me by making Martin's block dice red hot. I had a decent opportunity for a second touchdown with my blitzer but Martin sent one of his gutter runners in on a desperation (two-dice in my favour) blitz. He got a double defender stumbles and my hopes of scoring disintegrated quickly. He quickly turned this into a score for him to tie up the game. 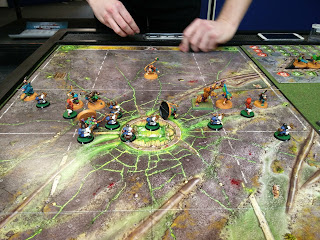 Still, I was feeling pretty good about my chances of getting a game winning TD when my runner managed to break through his lines. Unfortunately for me his blitzing gutter runners were at it again scoring a "knocked down" on his single block dice. He managed to scoop up the ball but couldn't get it far. I therefore had a chance to try to steal it back but could only push his gutter runner. 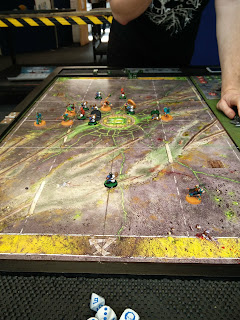 This proved fatal as his gutter runner easily dodged out and ran up the field to hand of to another rat who legged it down the pitch out of my range. I at least managed to put his rat ogre out as a casualty only for him to use his apothecary to prevent his death and put him in the reserves box. The final insult came when I tried a two-dice block and it came up double skulls which I re-rolled to another double skull (1 in 1,296 chance or 0.08%). Unbelievably my next roll of the block dice (on my subsequent turn) was also a double skull which is a 1 in 46,656 chance or 0.002%! 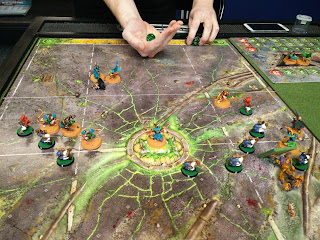 The game ended 1-2 to Martin with me scoring three casualties to his one. A massive blow to my play off hopes and a game I really felt like I threw away with some poor decision making.

Game Seven vs. Ashley Rodgers' Skaven
My first game in this league had been against Ash and I therefore felt reasonably confident. I wasn't thrilled that he now had an AV8 AG5 gutter runner and a recently purchased rat ogre though. Ash surprisingly elected to let me receive and set up asymmetrically to limit my punch early on. He rolled a "Blitz" on the kick off table too which saw him dash behind my lines and get pretty close to the ball. 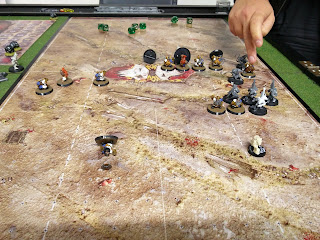 What followed, thanks in no small part to the torrential rain, was a comedy of failed pick up attempts and knocked down ball carriers that burned all of Ash's re-rolls and ultimately resulted in me only managing to make a break for it by an incredibly risky pick-up and throw from my Troll Slayer to one of my Runners. That meant if everything went right I'd be in a position to score on the final turn of the half. Of course, it didn't all go right. Ash was able to use his Rat Ogre to blitz down one of my players to free him up to mark the runner. I then elected to make a risky dodge to get a Blitzer to Blitz the rat ogre out of the way to free up the runner. I'd still got a chance of scoring but only a turn to do it.

On the penultimate turn of the half Ash was able to stun my ball carrier and get players back to mark the ball. I knew I had no chance to score now as none of my players were in range so, knowing I was kicking to Ash to start the half I decided to do as much smashing as I could. That resulted in another couple of injuries and knockouts. Unfortunately there was still a gutter runner standing near the ball.

Here's where I was a little foolish. Ash was convinced he couldn't now score a TD but I helpfully pointed out he could make a somewhat risky play that involved dodging through, picking up the ball then passing to a gutter runner who already have needed to dodge out from my players with Tackle to wait in the end zone for the long bomb from the half way line. He was just about to declare the pass action when my second bout of foolishness hit. I reminded Ash that he probably ought to stand up the gutter runner he intended to throw to and get him to the end zone before he declared his pass. I felt pretty confident that I was going to be punished for my generosity and sure enough Ash made all of his dodges and completed a 5+ pass and 3+ catch without any re-rolls to score a touchdown just before the half! 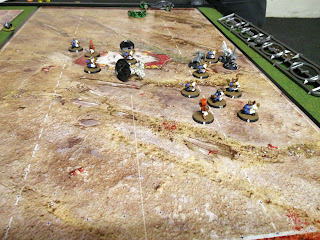 Whilst I felt gutted that it had worked out the way it did at least I'd probably earned some good karma for the second half right? When I managed to cage up and grab a pretty solid position for a touchdown I certainly felt like things were going right. I had two options at this point. Hold onto the ball and play for the draw or score straight away and hope to be able to capitalise on my numbers advantage and score again before time expired. At the point where I was about to score there were very few skaven still standing and I was pretty well covered. However, I know from bitter experience (and the first half of this game) that the rats' speed lets them quickly turn a loose ball into a touchdown the other way. I also knew that my best chance of making the playoffs was to win the game. I therefore decided to score straight away. 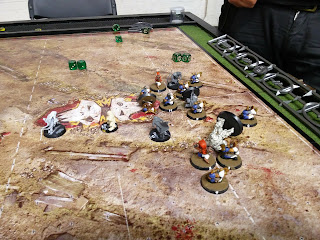 That gave me four turns (might've been three) to score a game winner. I was feeling pretty good about this when I managed to drive a kick quite far into the Skaven half of the field. I put another rat out of action and knocked all but the gutter runners down. That quickly proved to be my undoing though as the gutter runner with the ball handed off to another at the line of scrimmage who was able to make a 4+, 4+, 3+ and 2+ dodge roll (all of which had Tackle on them I think) and break free into my half. A further two GFI rolls (one of which needed a re-roll) and he'd managed to put a runner in a position where all I could hope to do was put a tackle zone on him (and one without the Tackle skill at that). I positioned myself in case something went drastically wrong but unsurprisingly the gutter runner easily dodged away for the score. My only hope now was for a riot that never came. I did a bit more smashing up but I was looking at another 1-2 loss to Skaven albeit with 5 casualties to his zero.

Conclusion
I certainly got greedy in the first game. The foul was completely pointless and ended up leaving my short-handed when Martin injured one of my players. I should've also burned a re-roll to try and take out his gutter runner with the ball rather than simply pushing him back. He wouldn't have had the movement to manage the play that lead to his winning TD and I might've even managed to get the ball back for my own score. Ultimately the odds balanced themselves out. My dice had been great in the first half and Martin's came hot in the second. Still, an enjoyable game against a great opponent.

The second game was frustrating for different reasons. Sure, I felt good knowing I'd helped my opponent out and not just watched him make a significant mistake. Doesn't help me make the playoffs though. I think ultimately this has always been my problem with any table top game. If I'm playing anyone other than Matt I don't play ruthlessly. It's been between me and tournament success for a long time. I don't like the thought that you can't win without being a bit cut-throat but experience tells me otherwise. I'm not saying I'd have definitely won the game had I not done what I did but we'll never really know. 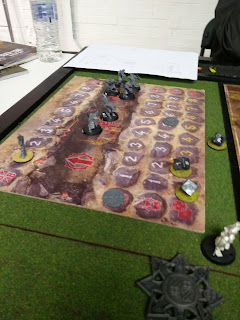 Still, there's potentially plenty more games to be had in the league so I still have a chance of making the playoffs with another couple of wins. I have mixed feelings about my Dwarves. I really enjoy bashing other teams up but their lack of mobility frustrates me. I think I'd rather be playing with a team that can cover ground better and score plenty of touchdowns. Maybe a little more fragile but more exciting when things go right. I suppose like Dark Eldar in 40K. They can be amazing when things fall right but incredibly brittle when they don't.
Posted by From The Fang at 23:04:00