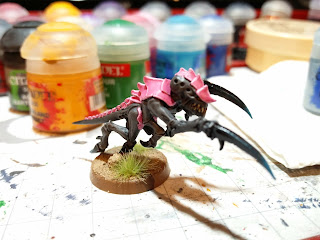 Just a quick update tonight on my new Tyranid army. So far I've managed to pick up a Tyranid Swarm box, the old Start Collecting box and the new one. That's give me quite a pile of models to assemble:


I'd like to run a burrowing force with a few Trygon Primes leading some genestealers into the fray. A combination of Behemoth adaptations and adrenal glands should mean that two thirds of the burrowing units make it into combat. To that end I'll probably grab another couple of the new SC box and flog the broodlords as I can't really see a benefit in having more than one. 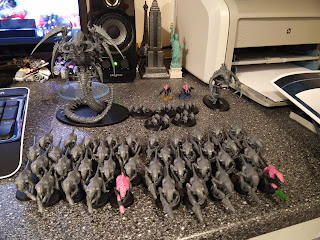 So far I've built up the termagants, rippers, trygon prime and broolord. The carnifex is basically done but I'm looking at magnetising it. Have to say I'm tempted just to make it into a standard build though as it's proving a pain to magnetise.

I'm most excited about the trygon prime though as I've wanted one ever since I saw Scott's (on the right obviously) which was not long after the kit was released: 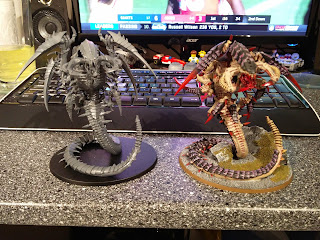 Anyway, as you can see from the picture above, I've got quite a lot of painting ahead of me. Hopefully the paint scheme I've chosen should make for a quick but eye catching effect. I can't decide what I want to paint first but I'm thinking it's best to paint a batch of gaunts then reward myself with a bigger monster to break things up.
Posted by From The Fang at 17:00:00