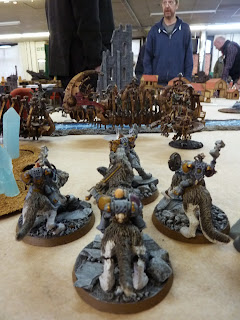 Having taken a break from playing last time I was keen to participate at BW8 and fortunately a last minute addition to the numbers gave me the opportunity. I've already posted my Wolves list up but suffice to say it's designed to let me play my games quickly rather than necessarily being the best army I can come up with. Deployment is just 3 units which certainly helps a lot!

Game One - Space Wolves vs. Necrons (Jason Roberts)
Well, you know that feeling when you see your opponent's army across the table and you know you have no chance. Yeah, I had that. Jason was fielding 4 ghost arks full of warriors, three annihilation barges and a command barge. His special character was Imotekh meaning his skimmers would get 3+ Jink saves. With all of that gauss I'd struggle to keep my land raiders alive for very long if I got in close. Sadly with my army I don't really have an option. We were playing for Blood Points (like 5th edition style VPs).

My TWC advanced at full speed but met a wall of Necron firepower with pretty much his entire army firing at them. Despite some luck on my part with the rolls the thunderwolves all perished without the Necrons breaking a sweat. I then needed to get my land raiders up the field pronto. The lascannons and multi-melta might just help me bring down a couple of the arks and give me a fighting chance. That simply didn't happen though. My terminators hopped out and tried to down the command barge. They then charged in. Arjac was lucky to pass his mindshackle and hit the lord 3 times with his hammer. With S10 he'd instant-kill the lord but it wasn't to be as he passed all his invulnerable saves. In the next rounds of combat Arjac failed his mindshackle and consequently the lord's warscythe did its job. If Arjac had made it out of that combat I might've felt like I had a chance. 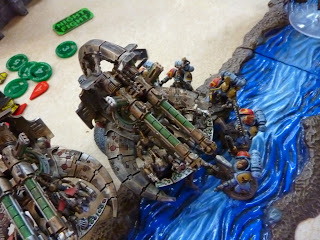 Both land raiders quickly fell and the grey hunters failed to take out a ghost ark with their melta but managed in combat. That didn't help me deal with the warriors though who with help from the command barge killed off the grey hunters in short order. The flyer arrived a little too late to make a difference and struggled to do any damage with the Necrons jinking like mad. Eventually it too succumbed to the Necron firepower but not before it had dropped off the Blood Claws. Sadly their krak grenades weren't enough to kill a barge and they too fell to complete the tabling. Final score 1950 vs. 115 with Jason scoring all three secondaries. Not the best of starts eh? 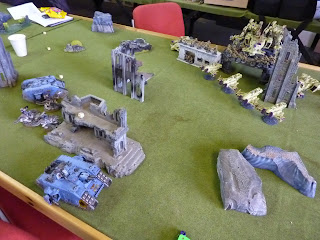 This game was basically a taste of my own medicine. I've often run Longstrike against land raiders, used piranhas and drones as screens and set up a devastating Supporting Fire barrage. Suffice to say I didn't like the taste! My first mistake was in my warlord traits. I rolled on strategic and got to infiltrate three non-vehicle units. Had I thought it through I'd have realised I could infiltrate one of my land raiders by giving Infiltrate to the wolf guard. Sadly I simply chose to infiltrate my thunderwolves. Whilst this got my closer to my target it meant I couldn't make a turn one charge. The second mistake was letting Tau go first. I figured my flyer would be able to steal the objectives towards the end of the game. I'm really not sure why I thought this was a good idea but I'm going with the excuse of having too much else to think about. 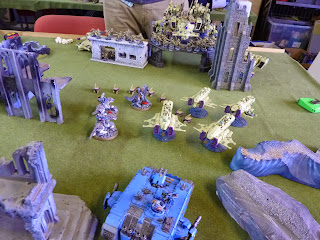 With the piranhas blocking the middle of the table I decided to disembark the grey hunters and charge them. This proved pretty successful with only a single immobilised skimmer remaining. Sadly, in the next turn both land raiders fell and the grey hunters were left stranded in the middle of the board to be easily cut down by the weight of Tau fire. The flyer arrived a little too late to make a difference and struggled to do any damage.

Eventually it too fell but not before failing to take out Longstrike. The blood claws died to Crash and Burn and that pretty much wrapped up the tabling with the Tau forces holding the central objective. I've since realised that the gun drones still aren't scoring (you'd think I'd realise being a Tau player) so this shouldn't have been the case but Gareth still would've won 2-0 on secondaries. 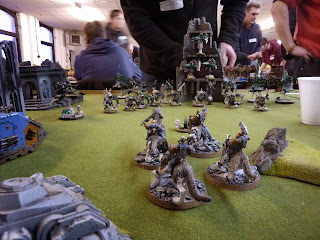 Going into the final game I'd managed to score a whopping 1.8 VPs out of a possible 66! This obviously put me on the bottom table and I was in danger of presenting myself with the wooden spoon. Fortunately I have a decent amount of experience of playing the Control Freak mission. I was also fortunate enough to be playing Liam's stunning Dark Eldar army which was an absolute pleasure. It consisted of a couple of venoms with warriors, a couple of raiders (one deep striking with a webway haemo), two ravagers, a cronos, razorwing, a large unit of reavers and Urien Rakarth with a big unit of grotesques. I've never played against grotesques and I don't use them in my DE army so I was interested to see how they performed. Similarly I've yet to try out the new reaver rules so I was looking forward to seeing if they've improved. 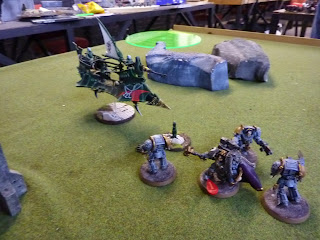 I won the roll off but since the scoring didn't start until turn 2 I held off the objectives to keep my TWC out of charge range of the grotesques. My land raiders were able to immobilise one raider and force a venom to jink. One of my land raiders went down early to the ravagers and the TWC took some heavy fire from the rest of the army. Fortunately they were safely distanced from the grotesques so I was able to move them and the grey hunters onto objectives whilst the remaining land raider controlled the other.

My flyer arrived but could only immobilise a ravager. I tried a few times to hit the cronos with helfrost but I either missed or it passed it's FNP save every time. The TWC eventually charged the grotesques but put on pretty poor show. With 10 S10 hammer attacks I only managed to kill a single grotesque. The lord did better with his claw! It was still enough for the grotesques to run though and allow me too keep hold of the objectives. The middle one was contested by kabalites but they were soon cleared away. 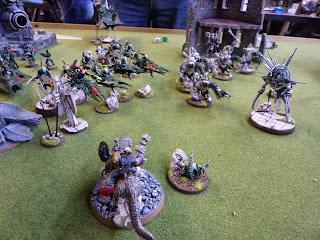 The webway raider arrived and destroyed the other land raider with its single dark lance (after the trueborn had failed with four blasters!). Arjac and his terminators repaid the favour by destroying both the vehicle and the squad though. The grotesques and reavers eventually lined up to charge the remaining thunderwolf on the objective (the rest having died to shooting) but the reavers failed a 4" charge and the grotesques failed a longer one. The thunderwolf was eventually killed though and the reavers concetrated their efforts on trying to shift the grey hunters. The blood claws and nearby kabalites eventually piled in leaving that objective contested until the end. Liam was now putting points on the board but I'd already racked up an insurmountable lead. The final highlight was a pretty poor dogfight between the two flyers which both survived! Final result 18/0 vs. 7/2 to me. 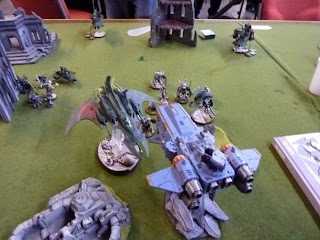 Well when I posted my list up I said that the land raiders would be a struggle for some armies to deal with. Sadly I didn't meet any of those armies. My first game was full of gauss weaponry, the Tau in the second game had plenty of fusion and lances in the final game meant that neither land raider survived in any of my games! Of course there are still some games where they'd do well but I still think they're difficult to justify using. Perhaps they could work in a better list with some distractions. Still it was a fun army to use and it certainly fulfilled its purpose of giving me quick games and allowing me to run the tournament. Mind you, my inability to make decisions and desire to chat to my opponent still meant I needed the full amount of time!

I'm really pleased I decided to play in the end and that the numbers allowed it. Not playing last time gave me a chance to chat to more people and make sure the event ran smoothly but I felt like a bit of an outsider. This time I was immersed in the atmosphere more and with the new score sheets (amongst other tweaks) I still think the event ran smoothly.

Thanks to my opponents for three entertaining games but next time I need to be placing in a less embarrassing position than 24th of 26!
Posted by From The Fang at 17:04:00