The eight Blog War was fought at the NWGC in Stockport yesterday. This was the first Blog Wars event of 7th edition (BW7 was the last of 6th). This may be a bold claim but, to my mind at least, I think it was the best event I've ever run. There were no major scoring issues, the painting competition was of the highest standard and generally the atmosphere was excellent. I may have performed extremely poorly in my games (I'll get to that in a later post) but I had a great day with a lot of banter and the feedback seemed good. Whilst we're on the subject of feedback, feel free to comment here and later in the week I'll be putting up a post to discuss what went well and what can still be improved (I said it was the best ever, not that it was perfect!). I'd really appreciate any feedback good or bad to help me make BW9 even better.

Numbers may have been down from the record high of BW7 (26 instead of 38) but there still seemed like plenty of people there. Once again everyone seemed to enter in the spirit of the event. People were playing to enjoy their games rather than worrying too much about the result. Of course there are prizes to be won but when the top prize £25 and you can win an £85 Imperial Knight just for showing up (raffle entry is included) it doesn't seem worth arguing about whether you made that 50:50 charge or not. Once again the three 100% attenders (Chris, Graham and Matt) showed up to keep up their perfect records. Indeed Graham and Chris actually played each other in round two with Graham taking a 25/3 vs. 0/0 win.

Anyway, here are the final results for the event (click to enlarge). As ever these results will be added to the archive. 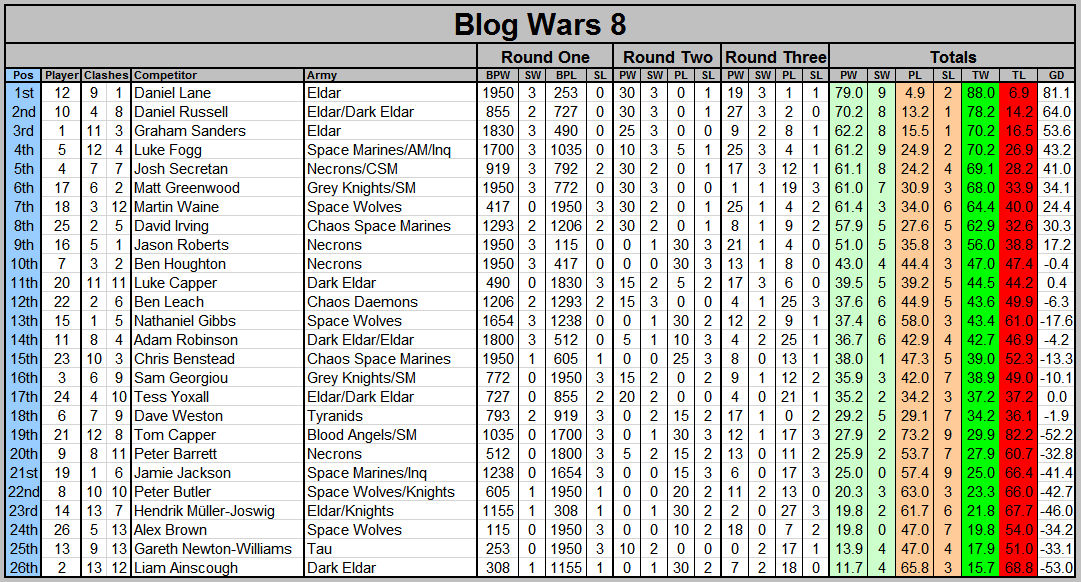 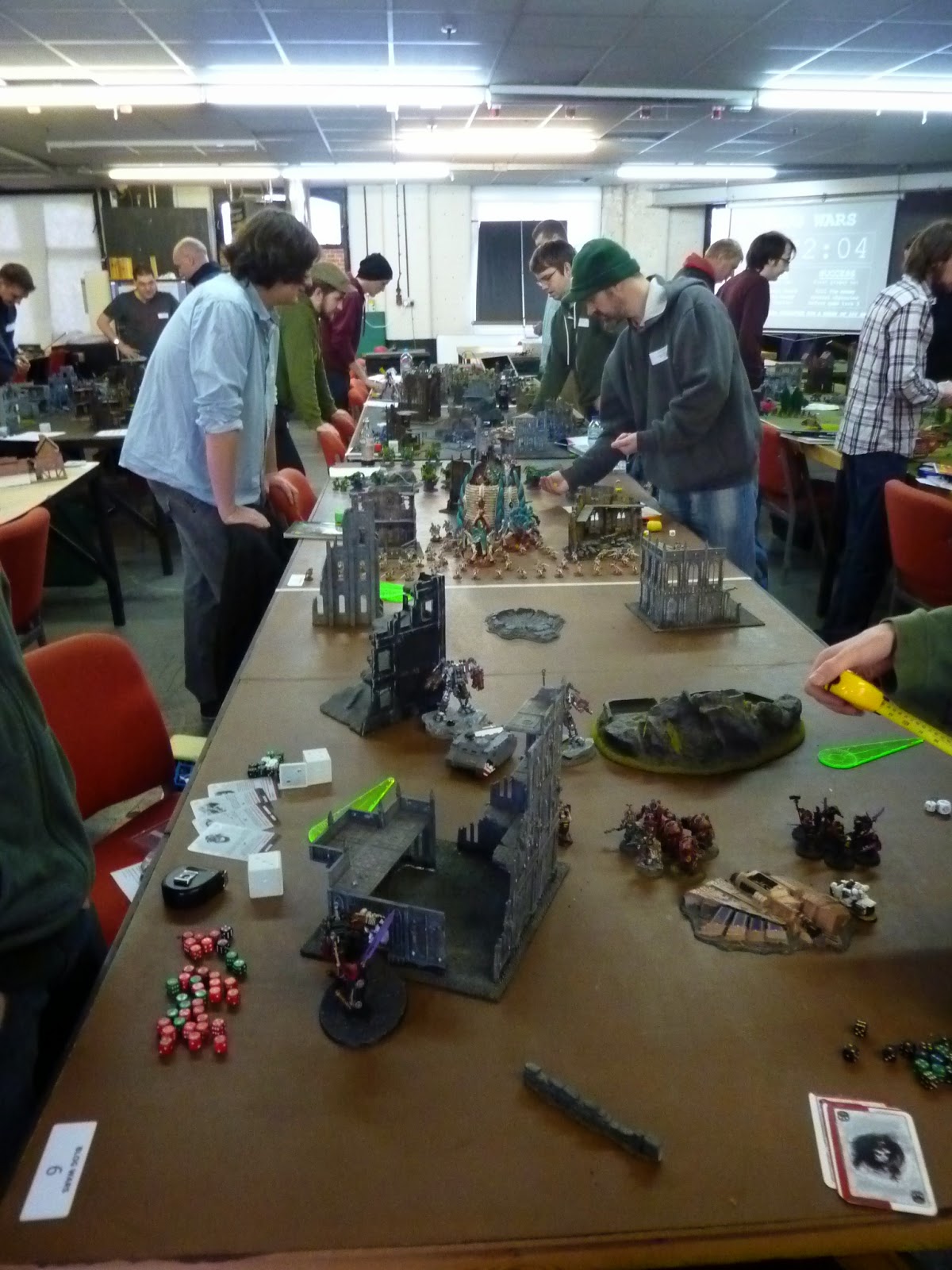 As you can see, Daniel Lane was the runaway winner with his footdar taking 88 of a possible 99 VPs over the three games. That gave him a "goal difference" of 81.1 and a 9.8 point lead over his nearest rival. Congratulations to Daniel Russell and Graham Sanders for placing 2nd and 3rd respectively. I'm getting a little concerned that Graham has turned into a power gamer with is serpent spam Eldar! At the bottom of the table Liam Ainscough and his stunning Dark Eldar army added weight to the stereotype that those who can paint can't play! I played him in my last game so you can read about that later in the week. It was Liam's birthday and despite losing his games he ended up coming away with not just the wooden spoon but also a pile of other prizes (more on that soon).

The real winner of the event was Peter Barrett though who managed to scoop the top raffle prize, namely an Imperial Knight. This is even more jammy when you consider he's won the top prize before (which was a Wraithknight at the time). As I've already mentioned, this is deliberate bribery to encourage people to focus less on the winning and more on the spirit of the event. That's without doing Favourite Game votes, pay attention GW! 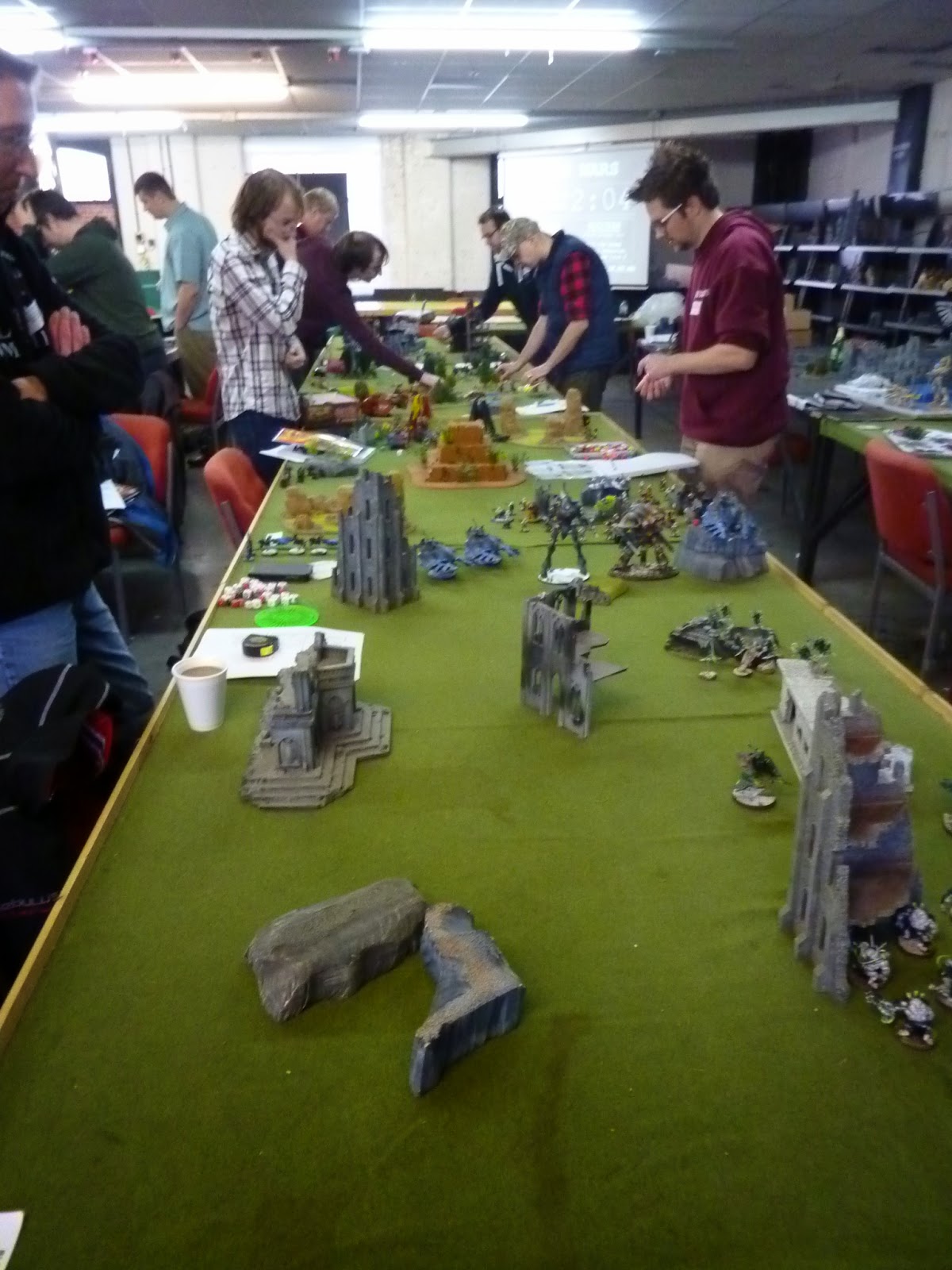 I've made only slight adjustments to the scoring and missions this time around. The first round is crucial as it allows for non-integer scores and therefore a near guarantee of being able to separate people. Of course there were four people in the first round who scored the maximum points but they permitted there opponents to score different totals meaning the "goal difference" could be used as a differentiation. This means it's important to focus on giving up as few points as possible. I may want there to be a friendly atmosphere but I'm not banning competitive play completely!

In the first round one pair were only separated by 87 blood points (and therefore 1.34 VPs!). That's one hell of a close game but the system allows for a winner to still be determined. Of course in later rounds it wasn't totally perfect as some games were strictly speaking a draw (since it's the total VPs that count) despite one player scoring more primary VPs than the other. Perhaps the primary VP total should be the deciding factor? Having said that it wouldn't have made a huge difference to the table. Once again there were players who had a couple of narrow wins and a big loss who placed lower than people who had done the opposite. On paper that sounds daft but I prefer this absolute scoring system to a WDL mechanic. 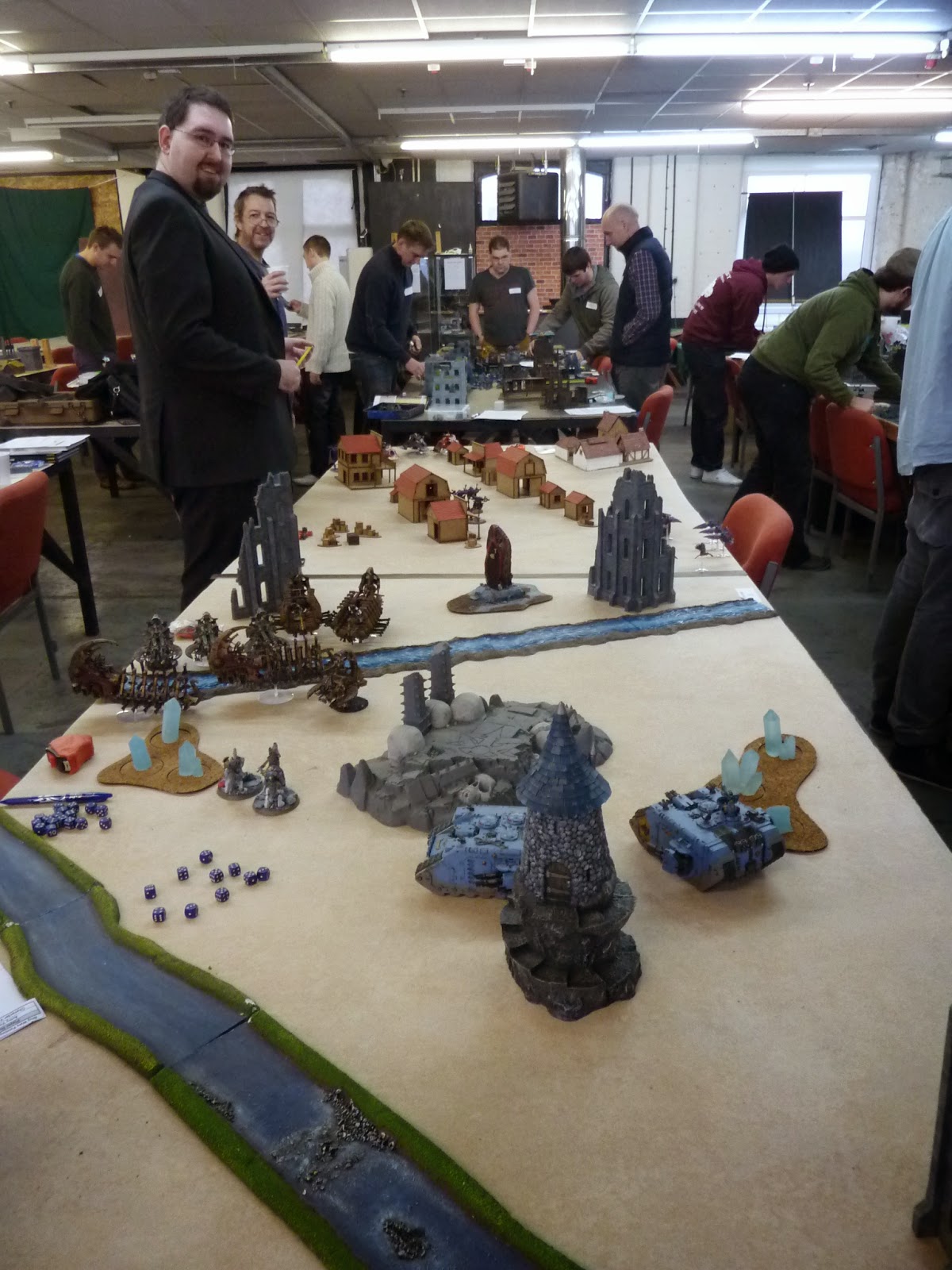 I was concerned that players would struggle to fit their games into the 2 hr 30 min slots but the majority of players seemed to make it to turn 5. Of course there are armies that find this easier than others but I don't feel like there's a need to drop the points or increase the round times (correct me if I'm wrong though please).

The army selection is something I want to revisit. For starters Imperial Knights didn't particularly make their presence felt so I see no reason not to allow the full three as allies. It'd be a struggle to make them a primary detachment as they'd need Gerantius (as their special character) and therefore you'd get a maximum of 3 others in before you needed allies to make it up to 1,850. The danger of allowing three knight is that the formation becomes available. I don't think it's devastating though but something I need to think about.

I'm conscious that only Imperial armies can take three detachments in the current system since the extra detachments are Inquisition, Imperial Knights, Legion of the Damned and Assassins. That doesn't seem particularly fair but then neither does saying you can either have an allied detachment or a single assassin. A lot of other events seem to be saying just two detachments though so it's worth revisiting. Bear in mind only a single player took 3 detachments this time anyway. I've also considered revising the allies OR formation restriction but again this is saying 3 detachments are possible so it needs some discussion.

The Painting Competition
I'm going to be posting the results of the painting competition in a separate post along with pictures of the winning armies. However, I'm determined to expand the painting competition at Blog Wars 9. Not only would I like to increase the existing prizes but I'd also like to add extra ones such as Best Conversions or Best Theme. This was the first time that one person has won both Best Army and Best Character but I'm conscious of the possibility that someone could take all Best Army, Character, Conversions and Theme though I suspect it's unlikely.

Your Feedback
As ever, the most important thing about this post are the comments that you guys leave me. I'll compile them all together into a discussion post and talk about what I want to change for BW9. I really want to hear ANY thoughts you have on the event so fire away!

The Next Blog Wars
Here are the dates for your diary:


Stay tuned to the blog for details, I hope to see you there! Thank you once again to everyone who came this time around for making it such an enjoyable day.
Posted by From The Fang at 16:51:00