Unbelievably it's time for another Blog Wars pie charts post! Before I go any further I just need to make a final appeal for the following players to get in touch with me with their army lists. I still haven't heard from John Bell, Luke Capper or Tom Capper. I've emailed a couple of times now but if any of you know them and can remind them for me please do so. Anyway, onto the meat (and potato) of the post.

Army Lists
The process of list checking is always somewhat time consuming but I've noticed a lot more people are now using list building software to generate their lists. Since I use Battlescribe and it's free to set up I might start making it a requirement to submit lists in that format. It would make the whole process easier especially when I have so little time to organise things these days.

The Pie Charts!
Before we get on the to the fresh pies it's worth reminding yourselves of the crusty ones from previous events (BW5, BW6 & BW7). Remember this is the first Blog Wars of 7th edition so the game is in a very different place now. Back in June the filling of the pies was mostly Daemons, Tau and Space Marines. A lot of new books have been released since then with Orks, Wolves, Grey Knights and Dark Eldar all hitting the shelves since the last event. Here's this year's primary/core detachment pie chart (click to embiggen): 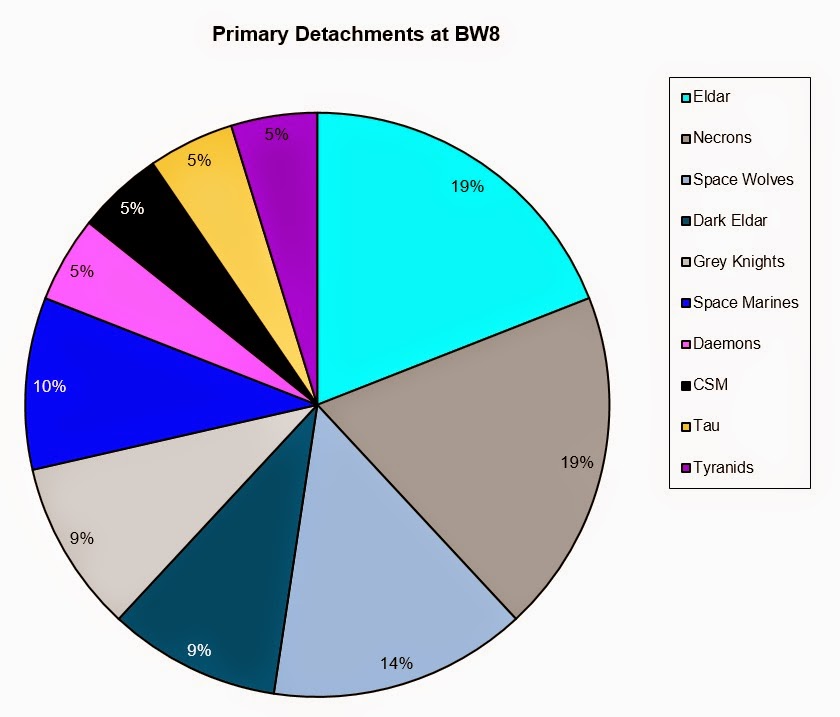 As you can see Eldar and Necrons account for around a third of the armies which will be in attendance on Saturday with Space Wolves not far behind. Essentially there's about a 50:50 chance you'll play one of these three factions each round. You'd have to be pretty lucky (or unlucky depending on your point of view) to face Tyranids, Tau, Daemons or CSM though.Of the Space Wolf players coming (and I'll also be running them if I play), two of the three are running the Wolves Unleashed detachment whilst the third is bringing a Champions of Fenris list (the only core detachment from a supplement). Similarly both of the Grey Knights players are running the faction specific detachment (of course). I'm pleased to see a couple of Dark Eldar players and even more pleased that one of them is pure DE. With a reduced number of players the variety isn't the same as it was for BW7 and I'm still upset to see a lack of Orks! Both Blood Angels and Astra Militarum have gone missing from last time too.

As you can see from the second pie below (again, click to embiggen) there's now more than half of the field using a second detachment. This is to be expected in 7th edition of course but there's actually only a single player who's taken a third detachment. This is interesting to me as it might make me consider making the army selection criteria different and perhaps saying just two detachments but with less restrictions on what they contain. 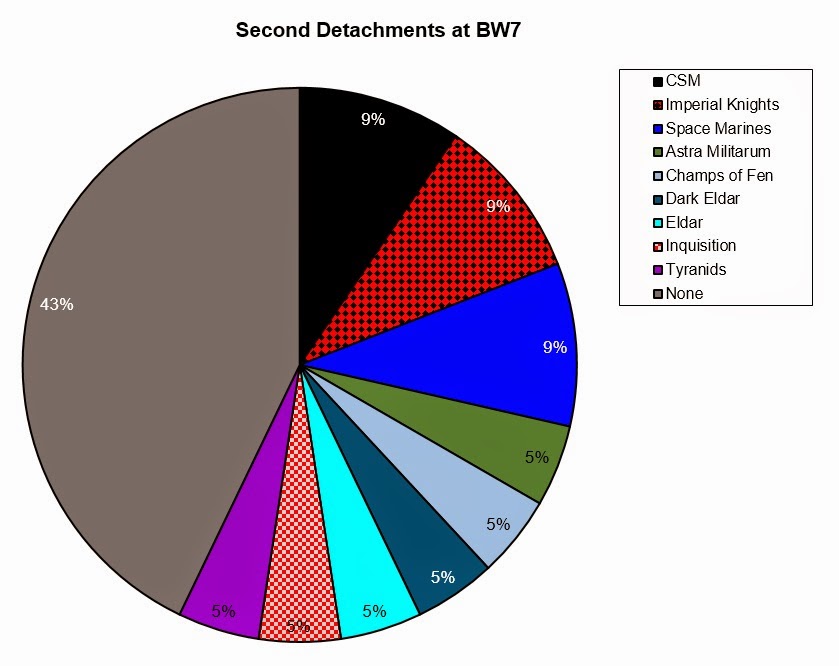 It's worth noting that four of the extra detachments here are formations. I'm quite pleased with how this has worked. I wanted to discourage taking two detachments from the same army but formations have allowed people to still partially ally with themselves without doing anything too broken. It's also an increased uptake of formations

After all of the worrying about how many Imperial Knights to allow or not there are only actually two players who are bringing knights and they've only brought one each as it is. My worry is I put too many restrictions in place and I've put people off despite there actually not being much (if any) filth within the lists. There are some strong lists in the field but unless I'm missing something there isn't anything too horrible out there. There's no excessing daemon summoning for example. I'm not sure I dare say it but it's actually looking like a pretty interesting selection of armies from which it would be tricky to pick a standout list. Of course there are stronger armies in there but nothing unstoppable which is always my aim.

As every with Blog Wars there seems to be decent mix of Imperial and Xenos armies as can be seen in this bonus pie chart!: 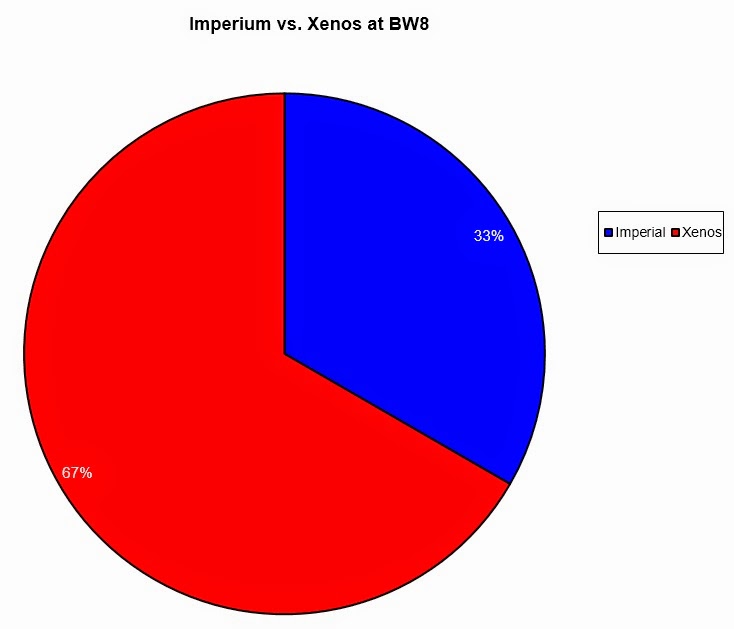 Roughly speaking that should mean you only play one of your games against power armour which is a total shift from how it used to be towards the end of 5th edition where it seemed like every army was GK, BA or SW! I have to say though that if it weren't for the recent SW and GK books I don't think there'd be even half that many Imperial armies in there.

Special Characters
As ever this is my favourite part of Blog Wars every time around. This is getting to be more and more difficult to justify though as we've lost something like a dozen special characters between the Tyranids, Orks, GK and Dark Eldar releases. That's a real shame to me but the recently leaked Tyranid units have given me hope that they might reinstate some of them over time. Anyway, as ever, Blog Wars requires each army to field a special character. As I've said I'm still waiting for a couple of lists but at the moment there are a total of 18 unique special characters with only a handful appearing more than once. Whilst Coteaz is usually a popular choice he can no longer be in the primary detachment and hence he's slipped out of the running. He'll still be present but it's perhaps nice that an auto-choice like that isn't featuring so heavily.

There's a lot of the usual suspects present though with Eldrad, Draigo and Fateweaver present but there's also a couple of curve balls thrown in like Lelith Hesperax, Lukas the Trickster and Arjac Rockfist (my personal favourite).

Attendance
I wanted to make a quick note on the attendance figures this time around. Since this is the pie chart post here's a quick graph to illustrate things: 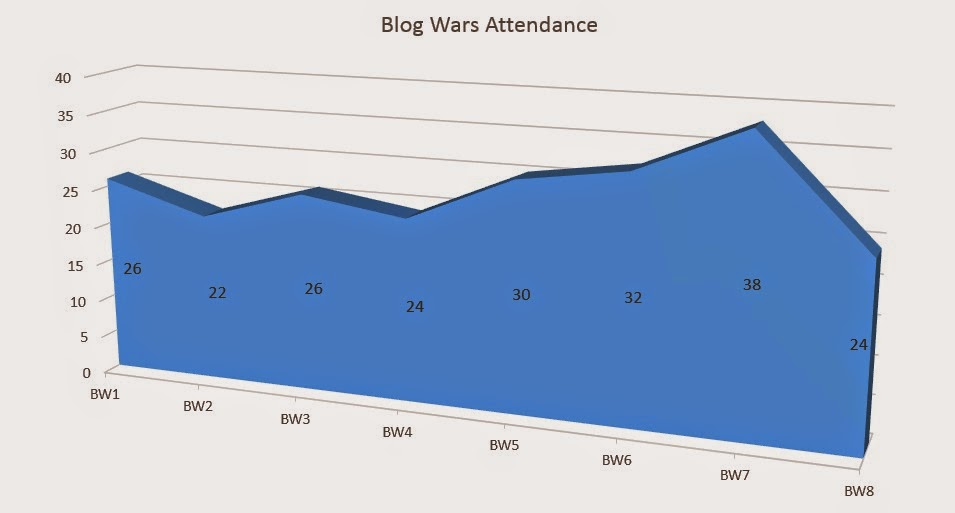 There's been a general upward trend to the event's attendance figures since BW2 with a record 38 players attending BW7 (the full 40 tickets were sold). This has taken a fall of about a third for Blog Wars 8 though. The question is, why has this happened and should I be worried about this?

Well, I've been giving it a lot of thought over the past couple of weeks and I think there are a number of factors which may have contributed to the decline in figures. For a start the winter event seems generally less popular which I tend to put down to people wanting to save for Christmas. It's got to me a lot more than that though. With quite a bit changing this time around it's difficult to put your finger on a particular cause but I think the main factors may have been the slight ticket price increase, army selection restrictions and general malaise for competitive 40K in 7th edition.

The ticket price is something I'm very grateful I changed now. Had it stayed at £15 (and assuming attendance was the same) I'd have really struggled to provide the prize support that I've always tried to maintain at an exceptional level. Lower numbers means less sponsorship from the guys at Element Games which means more of the ticket revenue goes into the tournament prizes. The extra ticket income has allowed me to keep all of the spot prizes and still provide a generous raffle though. Without having enough money in the pot I'm not sure I can offer extra painting prizes though and it's too late to announce those now when people would likely want time to work on their armies in response.

The army selection restrictions met with a mixed reception when I announced them and, as ever, I responded to feedback and tweaked them accordingly. I'm pretty happy with the system I've ended up with but I think it could be simplified and some of the restrictions are unnecessary. Hopefully for BW9 I can make things feel more open without just going no-holes-barred. I know of a couple of people this definitely put off but generally I hope people have raised their concerns and things have been adjusted to suit the majority.

The general malaise for 40K is more difficult to control. As I look down the list of people who have ever attended at least one Blog War (of which there are now 100) I can see some names of people who I know are no longer playing 40K (at tournaments anyway). Of course people move away from the hobby but it's still a shame not to see some guys I've known for a long time now. There's a selfish part of me that'd be quite happy if it was a dislike of the current meta that was putting people off rather than something I'd done though.

Conclusion
That's quite enough of the negatives. There's still a great core of players who have been to several Blog Wars now and the three veterans of every single Blog War are all again in attendance (although Chris took some cajoling). There's half a dozen new guys too who I hope will enjoy their first experience of the event. Whilst bigger numbers are great for variety and for boosting the prize pot I actually quite like smaller events as there's a closer atmosphere where people can have a bit more banter without feeling like just a number in a big pool of players.

Depending on last minute drop outs I may or not be playing but I'm hoping I will be so that I can roll some dice with guys I've come to regard as friends over the years. I'll be posting my list up in a couple of days but rest assured it was written a while ago before I read all of yours and I won't be eligible for any of the prizes anyway.

With the changes I've made to the score sheets and a few other little tweaks I'm hoping the day will run smoothly and to time. With that in mind I remind you to get in touch with any queries you have about the missions or general rules questions before the event so that we can just get cracking on the day. Otherwise I look forward to seeing you all for yet another Blog War!
Posted by From The Fang at 17:00:00