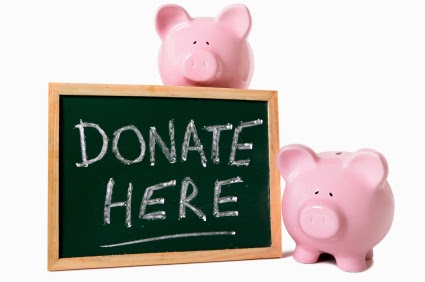 I've thought long and hard about this but I've finally decided to add a Donations button to the blog. Allow me to explain why.

Affiliate Schemes
For the first couple of years of From the Fang I didn't have any advertising at all on the site. It used to annoy me seeing banners all over my favourite blogs and so I wanted to avoid them on From the Fang. Eventually I succumbed though and started to run adverts for Wayland Games and Total Wargamer. These were part of their affiliate schemes with gave me a small percentage of any sales that were generated as a direct result of clicking on a banner on FtF. Over the time I've had banners on the site I've probably only had about £20 from Wayland. Not bad but clearly not much over the time period. I had sales with Total Wargamer too but despite chasing them up they still haven't paid me the commission I was owed.

Frankly I don't really like to advertise either company.  I don't use them myself as Dark Sphere offer 25% discount so if I'm making a large order I use them (as they charge for postage). Alternatively, if I'm just picking up the odd box or a codex I head to my FLGS, Wargames Emporium, who offer 20% off and since I don't need to pay for shipping it works out cheaper than DS. Anyway, neither of these companies have Affiliate Schemes so by recommending them I don't make a penny, but you should still check them out!

Anyway, the point is that I'm barely making anything from affiliate schemes and I'm not particularly fond of the companies so I'm going to remove their banners from the site. In fact I've done just that right now.

Google Adsense
Once again, I resisted using this for a long time and it's probably only been about the last six months that I've started using their ad content. So far I've made something like £30 which is better than I've done with affiliate schemes for a much longer period. Still, when you think about it that's something like 16p a day. Hardly a living wage eh? I'm also not a huge fan of their system of targeted ads. It scares me sometimes that I get adverts for something I searched for. It's an obvious revenue stream for Google and I don't think anyone is naive to it anymore but it just doesn't feel right somehow. That being said I now use the excellent Ghostery and Adblock on my Chrome to avoid tracking and to block any site ads. If the ads on FtF annoy you I heartily recommend you install Adblock to your Chrome so they vanish. I'm sure there are similar apps for IE, Firefox, Safari, Opera, etc.

A Brief History of FtF
I started this blog as a means of cataloguing the games of 40K we played between our little group of friends. It's been an online diary of my gaming since getting back into 40K after a long absence in my late teens/early 20s. From that it's evolved into something more though. Still, I never expected anyone to read my blog and I'm amazed that I'm currently averaging around 1,500 pageviews a day! That's still nothing compared to some blogs but remember I'm doing this solo. The problem is that it takes quite a while to write a post (since I usually write too much). My recent series on the Ork codex took around an hour per post. That's because I have to sit with the old and new codex to compare and find the changes and have a rulebook on hand for those rules I can't remember off the top of my head etc etc.

As I've said before I write those posts for my own benefit as much as anything else. By blogging about a new codex I really start to understand it and it forces me to think about how the units might perform. These are by far my most popular posts with the peaks in my pageviews corresponding to the Tau, Eldar, SM, Tyranid, and Ork reviews I've done recently. I'd like to carry on with these (and maybe finally finish my AM review) but with my little boy I find I have less time for the hobby in general. I've barely lifted a paintbrush this year despite my incredibly optimistic targets I set myself in my hobby resolutions post! When I get some spare time I tend to sit and blog. Usually because it's dark and I like to paint with natural light but also because GW are releasing stuff at a relentless pace now and I feel like I need to keep the reviews going.

Anyway, back to the point (if ever there was one) and the TL:DR version if you like. From the comments I receive and the emails I get it seems like people are enjoying my reviews. If you've found a review useful or you've generally enjoyed what I write and you'd like to donate something to show your appreciation then now you can. If you don't want to that's fine, thanks for reading anyway. I'm not for a second forcing anyone to pay to read the blog, just giving people that option if they feel they want to. I'm not going to call it something daft like "buy me a beer" because we all know I'll spend the money on plastic crack!

I'm not trying to make a living from blogging, far from it, if I can buy the latests books and the odd kit here and there then great. If no-one donates then it won't stop me posting but I'll be very grateful to anyone that does. As ever, thank you for reading this little blog and I hope you all continue to do so.
Posted by From The Fang at 17:00:00