This section feels a little crowded on the face of it but when you consider three of the entries are flyers there isn't actually that much choice here. Anyway, here goes.

Trukk
Interesting to see these here meaning you can presumably take them as something other than a dedicated transport. Strange though when pretty much every unit that could jump in one has the option of taking them anyway. Can't immediately think of a unit that might benefit from having one to hop into but perhaps I'm missing something. Otherwise I've already covered trukks in the Troops post. 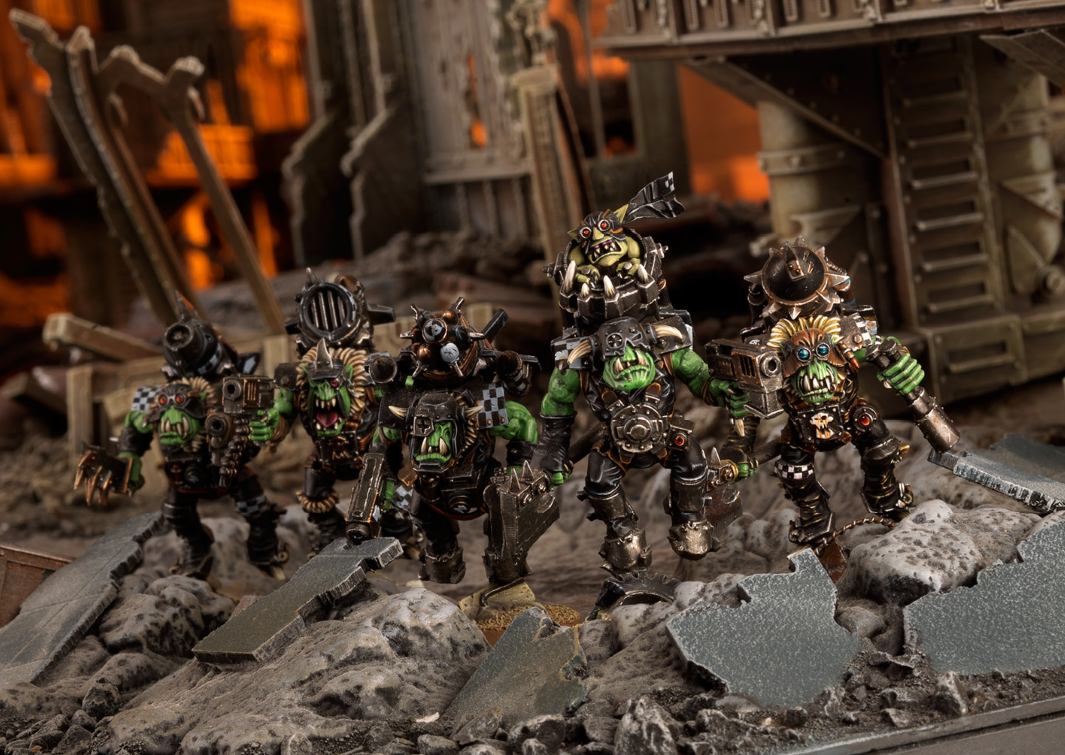 I have to say these are some of my favourite Ork models. There's something very orky about having a big rocket strapped to your back. Stormboyz have now dropped in cost by 25%. That makes them a bargain in my eyes. You can also now take them in mobs of upto 30 although with the mob rule changes this perhaps isn't as beneficial as it once was.

Their Rokkit Packs now work in the Shooting Phase to give them a 2D6" run move. Not quite as good as the extra D6" to the movement that they used to get but there's no automatic penalty any more (they take Dangerous Terrain tests which could be worse I suppose) and on a Waaagh! turn that means an impressive potential charge range. It's worth bearing in mind they didn't used to benefit from a Waaagh!

Pretty much the same as they were then but I really think there's a place for them in an Ork army now especially with the point reduction. 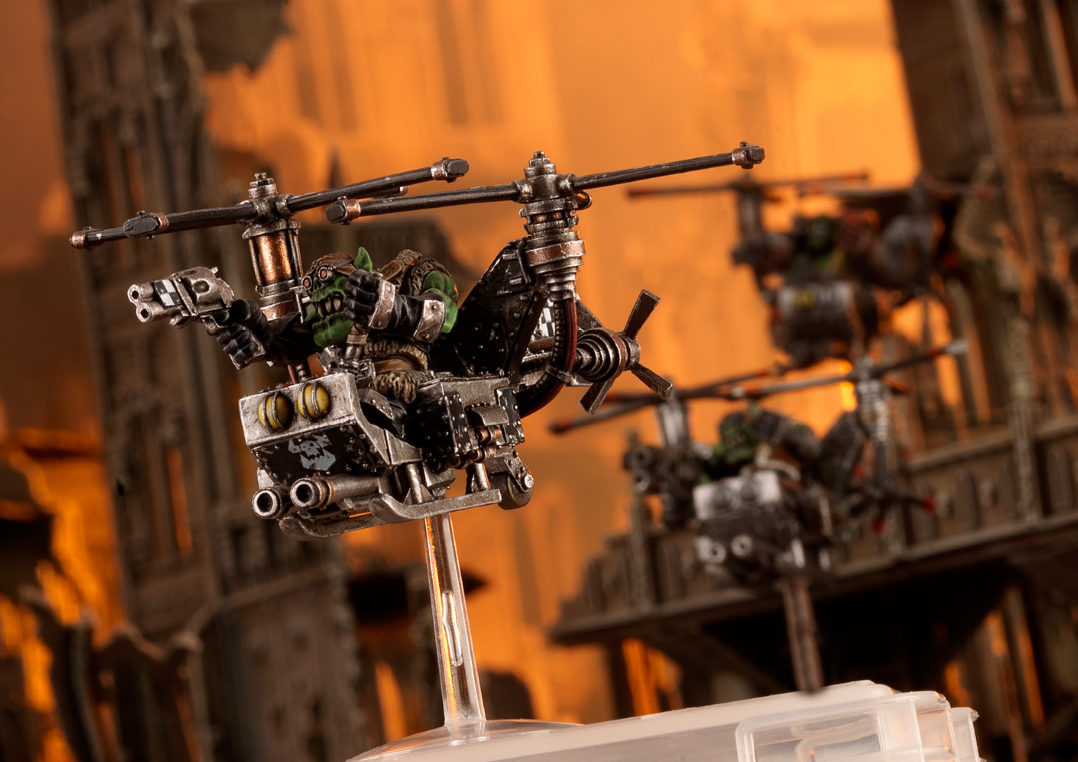 The biggest shame for me is that they haven't actually come up with new models for these. I've got some AoBR ones but they're becoming pretty scarce on eBay and the old models just don't do anything for me. Seems like they could've pretty easily put some AoBR ones in a box and flogged them for a hefty price.

Anyway, they've dropped in price by 5pts a piece and with T5 and two wounds they aren't too simple to shift. They're seen a massive drop in the price of their weapon upgrades (which are now free swaps) too making rokkit spam an option here too. Twin-linkage will help them hit the target so they make quite a decent anti-air or anti-tank platform. Their manoeuvrability makes it possible to get some side armour shots too and makes them a handful now they're scoring. The buzzsaws are still pretty expensive but I suppose they're effectively a power fist. Seems a shame to get them into combat though unless you're desperate.

I'd say keep them cheap. Stick to the twin-linked big shoota and a few bigbomms for anti-infantry duty or go for rokkits and maybe the odd buzzsaw for anti-tank. They actually might be some of the best anti-flyer options for orks with twin-linkage and speed. Deffkoptas will essentially still perform the same role they did in the old book. Scout them forward and give your opponent something to think about whilst the rest of your army slogs up the field. 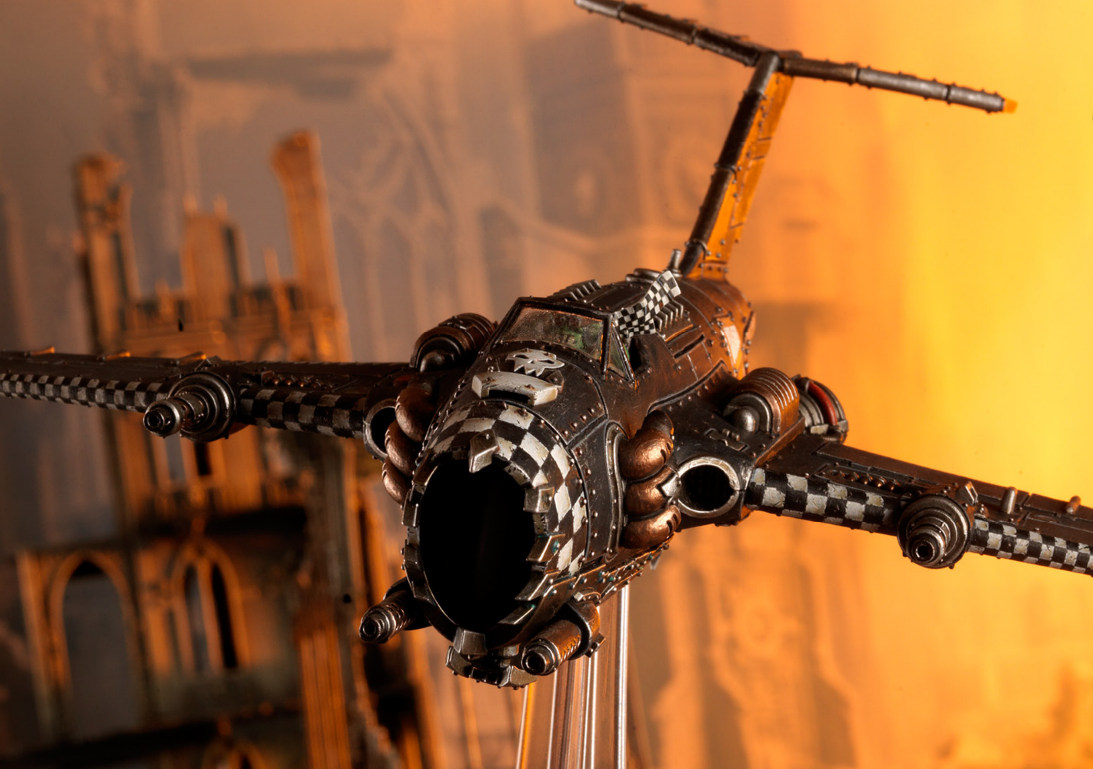 The Dakkajet has remained the same price in its vanilla form but the fully upgraded version costs a whopping 15pts extra. Not only that but the Waaagh! Plane rule now only gives +1 shots instead of doubling them like it used to. That's still a decent heap of shots but with the cost increase you can start to see the other flyer variants looking more appealing.

Fighta Ace is replaced with Flyboss which allows the Dakkajet to shoot at Flyers and MCs with BS3 too. Still, they're still the same glass cannon but with less cannon balls. That being said they probably benefit from the Jink rules a fair bit but you'd be pissed off to take Flyboss only to find yourself firing Shap Shots the whole time. 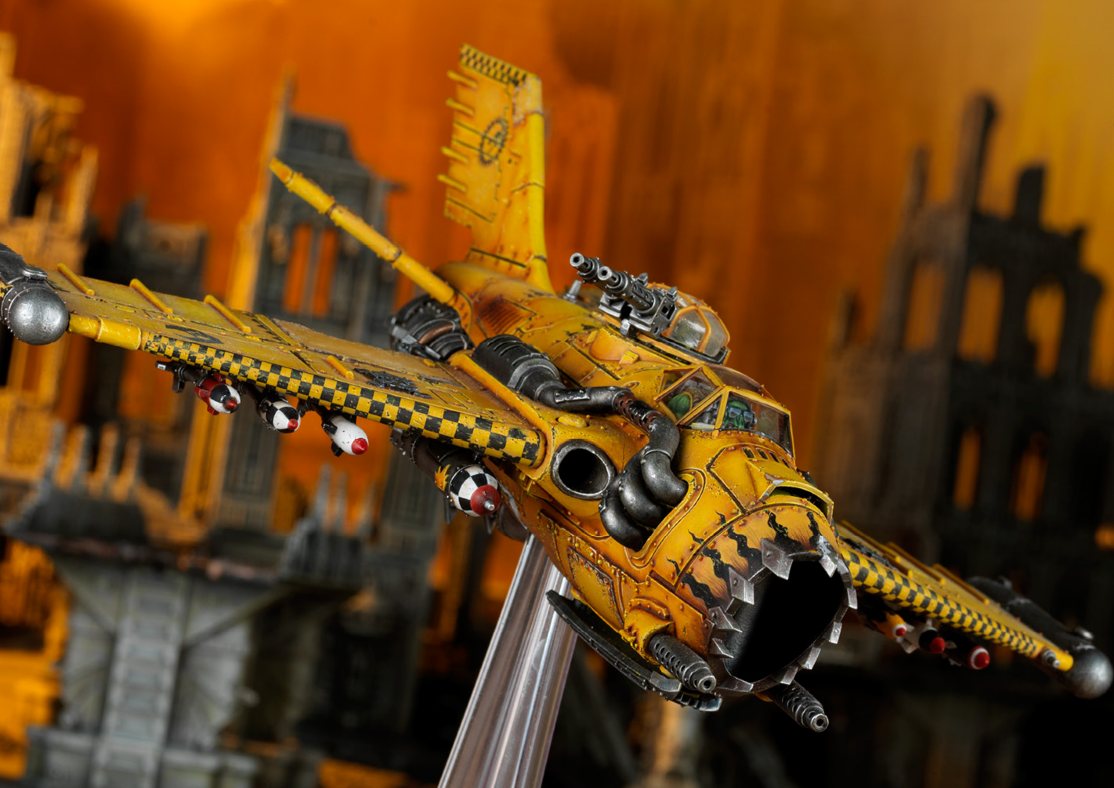 Unlike the Dakkajet the Burna-Bommer is now 10pts cheaper. Otherwise it's pretty much unchanged but bear in mind the changes to the flyer rules means it can now fire 4 of its missiles in one go. Of course this number reduces if it's dropped a bomb but there's some pretty serious anti-infantry potential there with both bombs and missiles ignoring cover.

Still not convinced the Dakkajet isn't slightly better but since their prices are now fairly comparable (depending on the number of missiles you buy) it all depends on what you want them for. For dealing with cheap scoring units the Burna-Bommer better but might never make it into bombing range. 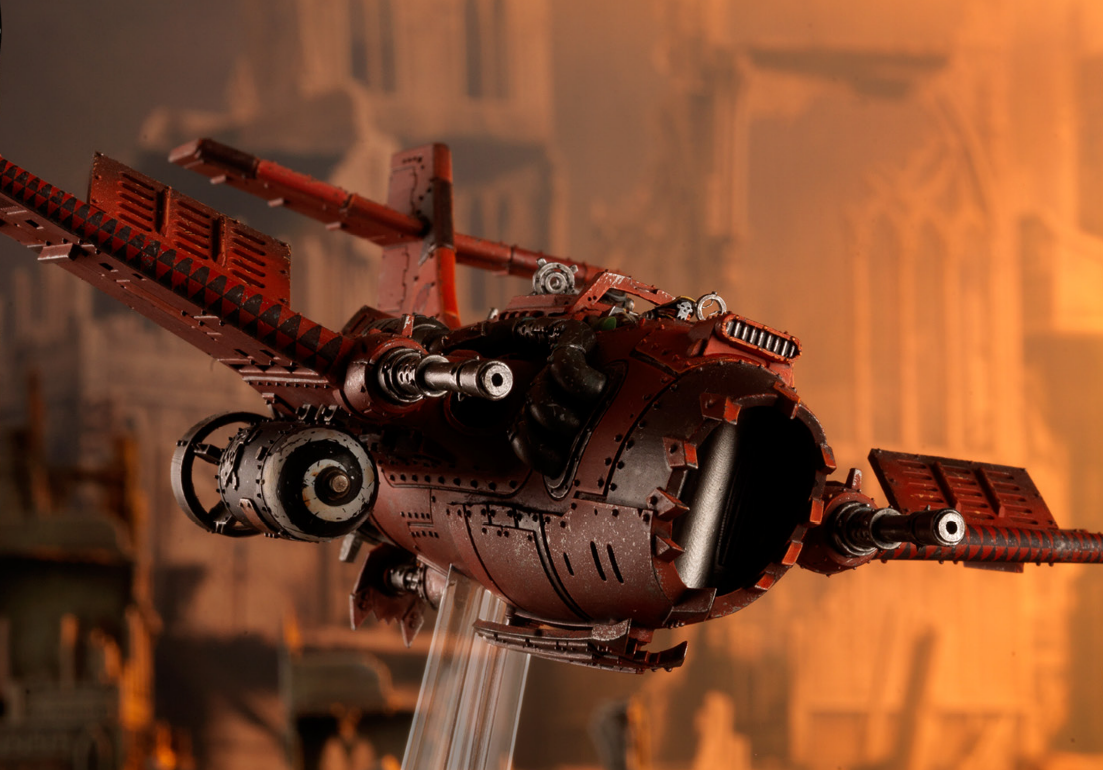 Like the Dakkajet the Blitza-Bommer is the same price but since it doesn't really have any upgrades it works out cheaper than a tooled up Dakkajet. Crucially the Boom Bomb is now AP2 (formerly AP4) and gains Armourbane. That makes it a pretty viable means of dealing with closely packed vehicles and heavily armoured infantry alike. Like the Burna-Bommer it might actually struggle to reach it's target though and Jink isn't really an option as it wouldn't be able to bomb.

The rules for Skreamin' Descent have also changed a little. Rolling a 2 achieves the death of your flyer as before. Whilst "Zogging 'eck!" is replaced with "Clipped 'im!" but only on a 3 and it specifies side armour. This means 4-9 is now a normal bombing run whilst 10-12 is still Dakka-dakka-boom! with only a slight change meaning shots are on rear armour and it can now fire both it's big shoot and supa shoota.

I'm actually considering breaking off some supashootas, shoving on a gunner and strapping some bombs onto my Dakkajets to make them into Blitzas. Orks struggle at anti-tank for the most part (although with all the cheap rokkits that might change) so the Blitza now appeals quite a bit. I don't think it's by any means devastating but it's certainly improved dramatically from useless to fairly decent. As I say, the challenge will be getting into bombing range and once you've used the two bombs it carries it's pretty pointless. Mind you, it'll not last that long so don't worry! 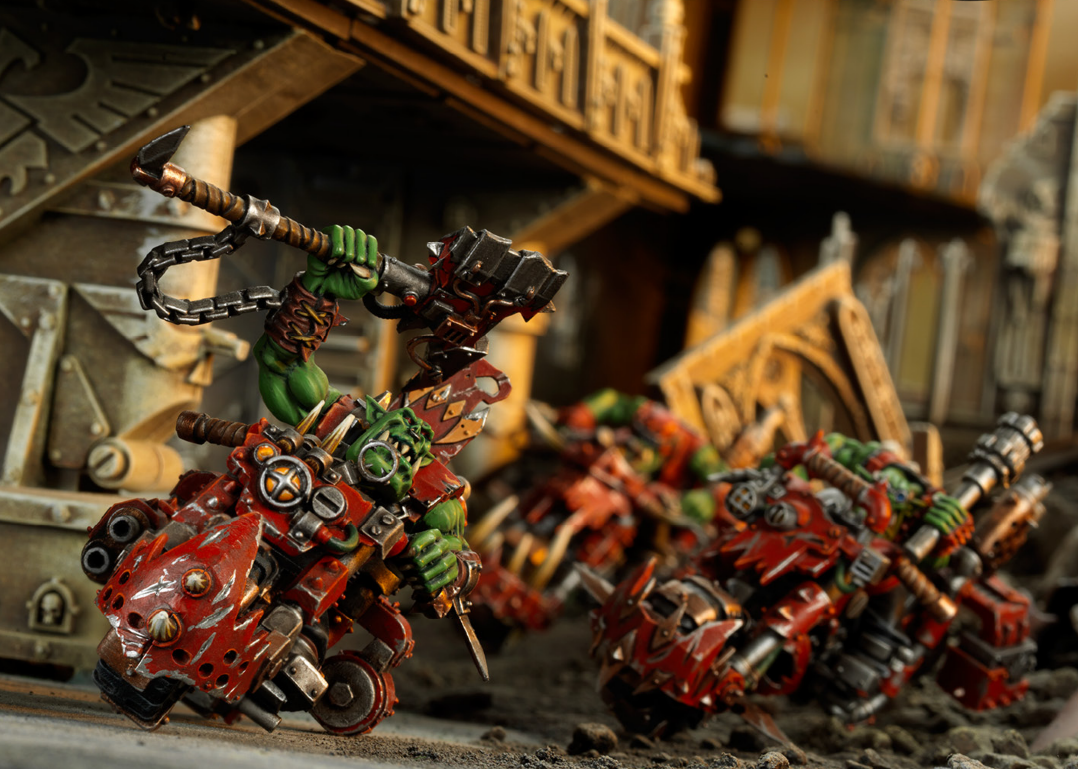 These guys have taken a HUGE point reduction of 7pts a model which is nearly 30%! Their maximum unit size is up from 12 to 15 too. They now benefit from a 'Ere We Go too. Sadly you can't make them Troops any more which doesn't matter too much for scoring but would've freed up some much needed Fast Attack slots.

As I mentioned when I spoke about Nobz. Their Exhaust Cloud is no longer a permanent 4+ save but instead a boost to their cover when turbo-boosting. Never noticed that typo before in the old book that gave them two wounds!! Anyway, they're still pretty reasonable for the price and something that your opponent has to deal with quickly. Not much else to say really. 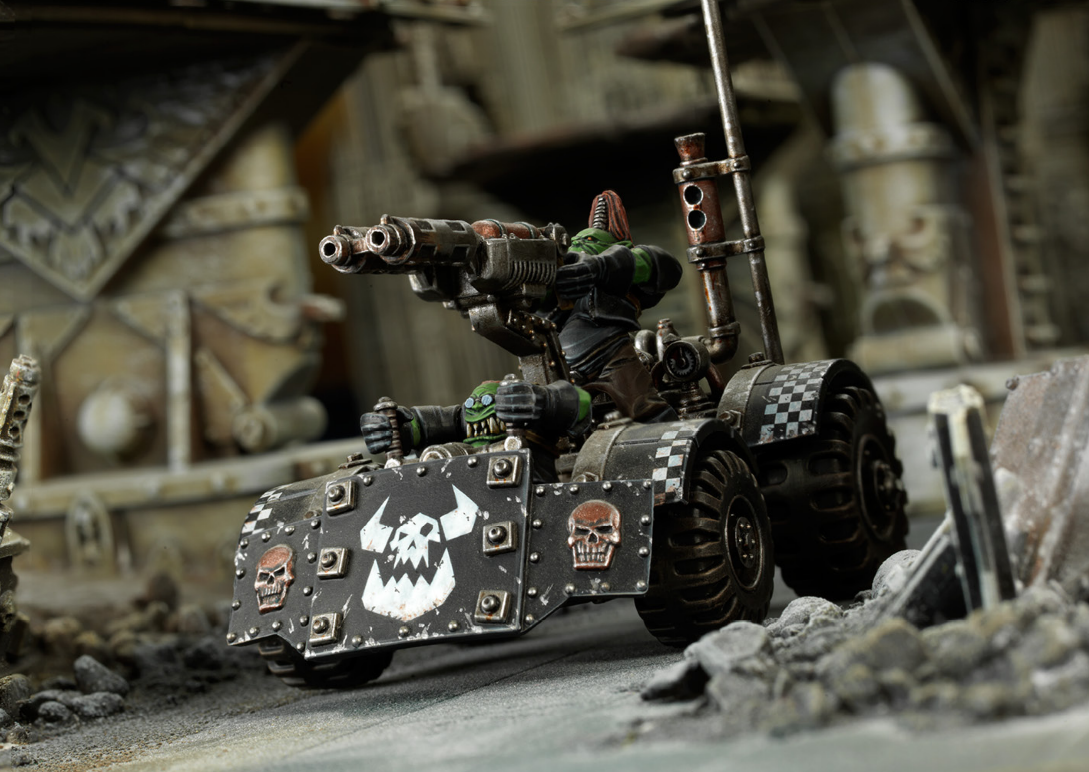 Another unit that would've benefited from a shiny new sculpt but it wasn't to be so we're stuck with the old ones that are frankly out of scale. Still they're 5pts cheaper and can now be taken in bigger squadrons (5 instead of 3). Not only that but they gain Outflank into the bargain. As with everything else it seems, their rokkits are now free. It's starting to get difficult to decide where to bring the rokkits now actually!

Outflank makes a huge impact on Warbuggies' effectiveness. They were pretty much a waste of time before but being able to Outflank some Skorchas to clear cheap scoring units or some rokkits to get side armour or even rear armour. It's all adding options which has to be a good thing.

Conclusion
I was disappointed by the changes to the Dakkajet, not least because I've already built both my kits up as them. As I've said I'm seriously considering making them into Blitza-Bommers but I'm not going to do anything hasty until I've had more games.

Generally speaking this section of the codex has me pretty excited. There are some big price drops here and most of the units offer something useful. I'm a big fan of forcing my opponent's hand by putting units in his face or otherwise forcing him to play in a way he didn't plan on. Units like Stormboyz, Warbikers and Deffkoptas are fast and effective enough that they can't be ignored. That buys time for the rest of your army. Warbuggies with their new found Outflank can force your opponent to bunch up in the centre and with clever objective placement on your part you can make things interesting.

Let's not get too carried away. None of these units are particularly durable and in numbers they still work out fair expensive. The point is that they should act as a force multiplier for their short little lives letting you get the main force stuck in unmolested. This section alone has given me a lot of hope for this book and I can't wait to get writing some lists and surprising some opponents.

Getting towards the end of the reviews now. Just two more sections to go. Stick with me!
Posted by From The Fang at 17:00:00