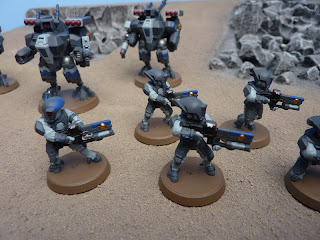 In the run up to my first tournament of the year I've been pitting my Tau against a selection of armies controlled by my usual opponents. Here's a run down of how they've performed against various armies and the lessons I've learnt.

Tau vs. Grey Knights (Matt)
This was the game that persuaded my to take Tau to Jolly Toys in the first place. Matt fielded an army with several rhinos/razorbacks, a land raider and a couple of dreads. First turn I stripped away most of the vehicles and it wasn't until the end of the game that we realised Matt had narrowly beaten me on KPs. A full report of the action can be found here. Bear in mind that's my older Tau list which has changed a little since then.

Tau vs. Necrons (Jamie)
Jamie was trying out a few things with his newly acquired Necron army so his list didn't really reflect those I'm likely to meet at tournaments. However, it did give me an idea that I'd struggle to take down Necron infantry. It didn't help that Jamie had several resurrection orbs in there but still it's clear that massed, heavy infantry will be a difficulty.

The rest of the army didn't give me too much trouble. The barges die pretty quickly and once they're gone the necrons rely on their eldritch lances which Jamie didn't have in great numbers. I still ended up losing the game though since his warriors hugged objectives better than my fire warriors did (as you'd expect).

Tau vs. Necrons (Matt)
Matt's Necron list was a lot more streamlined than Jamie's. He made full use of Writhing Worldscape, Tremor Staves, Eldritch Lances, Solar Pulses and both types of barge. It has to be said that with smaller units of warriors knocking around it was a lot easier to deal with his troops but those tesla destructors are hideous when he rolls a 6 pretty much every time he fired them, especially with re-rolls.

The eldritch lances did a much better job here and I lost several of my tanks. I did well in the early stages by taking down barges and killing off squads. I was unlucky not to kill a necron overlord who came back from the dead and made a mess of my broadsides. The game really could've gone either way in the closing stages but the problem was that I'd over committed myself early in the game to avoid losing out to night fighting too much. I should've let him come to me for a turn and held my ground.

One thing that neither Jamie or Matt did was to use Veil immortals. I think they'd be pretty nasty against Tau when you've not got long to bring your weapons to bear before they jump off again.

Tau vs. Orks (Matt)
This was to be a test of my ability to deal with massed light infantry i.e. troops without a decent armour save. Matt fielded a trukk heavy list with a couple of battlewagons, deff dreads and of course Ghaz. Having not played Orks for a while I'd forgotten just how far they can go when Ghaz makes them fleet with a 6" run. Again I positioned portions of my army too far forward and combined with the fact that Matt made the Kustom Force Field saves that mattered, I really didn't stop them getting to me.

When I used to play Tau regularly I would tend to hug my board edge and let my opponents come to me. I wanted to avoid this style of play in these games but frankly it probably would've made the difference between victory and defeat in nearly all of these games.

Tau vs. Blood Angels (Dave)
For a full report of these battles look here. Basically these games confirmed what I already feared about jump pack lists and helped demonstrate how effective Tau can be against mech lists.

Conclusion
Looking back it's depressing to realise just how many times I've used this Tau list and lost with it! However, as Matt and I have discussed, you learn far more about an army when you lose than you do in victory. There's certainly a lot of lessons to be drawn from these games.

Firstly, I need to remember that there are no other armies in the game that can match the range of most of my weaponry. Broadsides can be positioned right in a corner and still hit nearly all of the board. I've also learnt that deployment will be absolutely crucial. There's clearly a lot of duplication and redundancy in my lists but it's important to make sure I keep certain units apart. For example, my broadsides will always be a target so I need to have them at opposite ends on the board so that my opponents must spread their forces to deal with them. I also need to think about multi-charges and try to minimise them by spreading my units out.

I could really do with another unit of troops but as I've said I'm not a fan of kroot, I don't have the models for more fire warriors and can't spare the points for them anyway. The key thing is to try and keep my fire warriors alive as long as possible in objective games. Their devilfishes are guaranteed a cover save thanks to disruption pods and AV12 makes them fairly durable. Deciding when to disembark them for some rapid fire goodness is crucial. A single space marine can probably take a squad of fire warriors in combat so I need to be sure I'll kill off an entire squad.

Target priority will be important too. Tau work well when several units combine their fire to bring down a heavy enemy unit. If I spread myself too thinly my firepower will be wasted. However, I also need to consider the possibility that I'll kill a unit quicker than expected and therefore choosing which order to fire my units is tricky. If there's a unit that can only fire at that particular enemy unit they should fire first and units which could hit several should go last. If only it were as simple as that!

Finally, what's certainly clear is that it's going to be a big challenge for me to perform well at the tournament. I'm not naive enough to think I'm going to be up on the top tables but I'll be happy if I at least win a game! If I win two I might pass out!

Now I really must get back to painting them!
Posted by From The Fang at 17:00:00