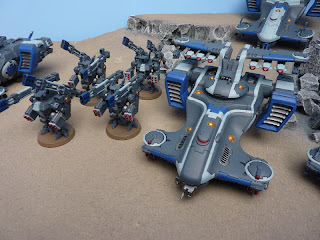 In the last post in this mini-series I'll talk about the final section of the FOC - heavy support. These are undoubtedly some of the best units in the tau codex and it's a shame you have to choose between them as they've all got a place.

Heavy Support
For a change there's actually three things worth taking here. Firstly let me cover the one that isn't, Sniper Drone Teams. On the surface they sound OK and 80pts isn't too expensive. The unit actually get's to make the most of its stealth field generator as it has 36" range on its weapons. Sadly they just don't pack enough punch and with so many cover saves at the moment there little chance of them becoming useful any time soon. It's a shame because I love the models. Maybe if the new book gives them the ability to target specific models I might consider them but until then they're easily beaten by everything else in HS.

With a pair of markerlights and 6 seeker (krak) missiles skyrays are a threat to light vehicles. Granted the army doesn't need much help dealing with vehicles but the skyray is useful for its synergy with the pathfinders. Catch a unit of marines in the open, light them up and then unleash a torrent of missiles. The markerlights count as defensive weapons and with the aid of a target lock it can split its fire. I usually equip mine with a smart missile system so that you can keep it at range and still hit stuff in the midfield. AV13 and a disruption pod will make them an irritation to deal with. They'll still blow up eventually but hopefully by then you've set off all the missiles. Unfortunately, they usually get overlooked in favour of hammerheads.

The hammerhead seems excellent at first. The option to fire its railgun as a solid shot (S10 AP1) or submunition (S6 AP4 L.Blast) makes it very flexible. However, despite having BS4 (thanks to the targetting array that's included) I find the solid shot misses. Frankly broadsides do the railgun thing better. We all know large blasts are hit and miss but one thing that is nice is that scarabs die in droves when you hit them with it! Opponents always seem to target them first, and whilst this can work in your favour, it means you'll need more than one to use them effectively. I'd rather have more broadsides though. The ion cannon is an interesting option that I have to admite I've always ignored them in favour of the railgun but with S7 and 3 shots at BS4 and they'll hurt rhinos and then AP3 will upset MCs and marines alike.

Finally, we come to the stars of the show, broadsides! There are few if any units in the game that strike fear into people's hearts like the XV88s! They've got the best anti tank guns in the game strapped to their back and what's more they've twin-linked them! There's very few things that can stand up to that punishment. They're going to be a target for your opponent so make them strong. I like to give them a couple of shield drones for the invulnerable save and ablative wounds (good for soaking up lascannon hits). The other thing to do is give them advanced stabilisation systems. These are good for two reasons, firstly to keep them moving and keep them in cover and secondly so that they don't lose a turn of shooting in DoW like most heavy weapon teams do. I'd nearly always field a pair of them and consider giving the team leader a target lock for multiple target fun. If you've got the points and don't fancy a hammerhead or sky ray then either beef them up to 3-man teams or stick in another team of 2.

They'll die in combat to anything with power weapons but they can still be frustrating here since both the suits and the drones have 2+ saves. Holding up a unit is always good for the tau but you have to hope the combat eventually ends on your opponents turn!

Special Characters
Regular readers of From the Fang know that I love my special characters. I really tried to find a use for them in a Tau army and to be honest I couldn't. Let's start by saying that Aun'Va is god awful. I mean like truly truly pointless. Why pay 205pts for something that has to die to make the army better? He's going to be hard to kill at range but otherwise he's useless. I really hope they do something good with him though in the next book.

The trouble with farsight is that he gives close combat benefits to an army that wants to avoid it at all costs. He also enforces restrictions on your army. Most importantly only allowing a single broadside team! He isn't too expensive though and can have a massive unit of crisis suits as his bodyguard. Giving everything in the army a bonding knife is a nice touch but he just needs a bit of tweaking before I'll take him. I've got a farsight model knocking around somewhere but he's not exactly brilliant. I've got high hopes for the new codex but god knows when that will be!

I've never actually tried out Shadowsun but I see her as a bit of a suicide unit with her fusion guns. Again she's not awful though and has some nice upgrades. She does have positive effects on your army and won't die quite as easily as a normal suit. The model is nice so I might give her a try but to be honest there's better ways to spend the points in a Tau force. That and I'm crap at painting white!

Conclusion
I hope people have gained something from these posts. I apologise if they've been a little negative in places but I'm growing more and more frustrated at the lack of a new codex for my beloved Tau. My aim in writing these posts was to make me think more about my army selection and if you've found them useful then that's a bonus. I might have totally changed my mind about these things after the tournament but we'll see how I get on!

What's most frustrating about the lack of a new codex is that they really don't need much to improve them. Fingers crossed it'll be this year but it's looking less likely.
Posted by From The Fang at 17:00:00