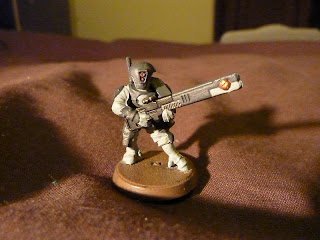 Following on from Monday's article about HQ and Elites I'm going to take a look at the next two slots on the FOC.

Troops
Tau armies must include a squad of fire warriors. A lot of people hate this but personally I think it's a good thing. When the new book lands I'll be really disappointed if the best builds don't have any actual "Tau" units in them. There are a lot of fire warrior haters out there, I can see why, but I disagree. I love fire warriors. There, I said it. They're shite in combat, they really are. So is everything else in the codex though! Guardsmen aren't much better and there isn't so much hate for them! Oh and fire warriors tote S5 guns not S3. I think people expect too much from them. Personally I think 10pts is a little steep and for this price they should come with a bonding knife for free or slightly better Ld. Let's be honest you're paying for the gun not the guy here.

Now, most people on the net say the best way to use them is in the minimum 6 man unit, locked in a devilfish and holding objectives for dear life. Whilst I've used them like this I really feel like it's wasting them. Don't compare them to the troops in any other codex because frankly they'll lose out. Guardsmen have more options and are half the price, wyches are awesome, genestealers are great, boyz are numerous and they aren't even in the same league as Space Marines. However, like guardsmen they come into their own when boosted by other units in the army. Whilst IG's "orders" system is arguably better, markerlights can make fire warriors disgusting. If you don't like fire warriors you probably aren't using pathfinders. Combined they can be awesome. I'm going to leave my discussion of fire warriors here and I'll return to it when I get to Fast Attack and hence Pathfinders.

Onto Kroot then. The internets pretty much universally prefers these to fire warriors and whilst I've tried to see their point of view I simply can't agree. They're certainly better in combat but that's hardly an achievement when fire warriors are probably one of the worst units in the game in that score. However, you probably won't get to try them out since with initiative 3 and no armour save they'll be dead before they swing. Against GEQ they'll do OK in combat but it's MEQ where you need the punch. The rest of your army is quite capable of killing light infantry. Let's be positive for a minute, for the same price as the minimum fire warrior team in a devilfish you could get yourself a 20-strong kroot horde. They can infiltrate and hence Outflank. If you can find some trees they'll get a 3+ cover save and they've got rapid fire guns to irritate your opponent.

That's the key word here: "irritate". That's pretty much all they do. They don't do enough damage with shooting to make your opponent have to deal with them. They'll die in one phase of combat with most things too. So why do people love them? Basically because they act as bubble wrap for the rest of your army and they can be decent objective huggers (albeit with crap leadership). Whilst they do provide a nice cover save for the things behind them, if they charge or get charged they'll actually help your opponent get to you quicker with a consolidation move!

I've just never got on with kroot. Maybe I'm expecting too much from them but if I'm going to spend points on them I want them to perform a function other than to sacrifice themselves for the greater good!

Fast Attack
This is the first section of the codex where we get more than two options. However, you can essentially forget about two of them so we're back to a 50:50 again. I can't think of any situation where I'd take gun drones. You have to spend at least 48pts on them and they're nothing more than a nuisance to your opponent. You get them for free with vehicles and two of them is about as annoying as 8 are anyway. Pinning isn't very reliable so they're pretty redundant.


Vespids don't seem too awful at first but they're a little bit contradictory. They've got decent guns but despite a poor statline they're given "fleet". Why would you ever charge something with them? They're the only T4 infantry (ignoring suits) but they have a poxy 5+ save. They're incredibly over priced too. Were they cheaper you might think about a large squad to use the AP3 guns but since they're BS3 and need to get to 12" for a single shot each, don't bother.

Luckily, the other two options are actually pretty decent. Firstly the piranha is an excellent unit for the tau. Think of them performing a similar role to a land speeder and you aren't far wrong. Blasting them at full tilt for a 4++ save and sticking them in your opponents face is good. They're AV11 on the front which helps keep them safer from bolters. For 70pts you can get a fusion blaster and targetting array. Not amazingly good value compared to a land speeder especially when they're open-topped but you can see why they can be useful. Late on in objective games is where they really shine of course with last minute contesting. I don't take them in squadrons because with them being open topped your opponent only needs to roll 3+ on the damage chart to wreck one. Better to keep them separate and hamper your enemy in multiple locations. They are great for supressing your enemy, not with torrents of fire but with something in their face that they have to deal with asap or have it causing havoc with their vehicles etc.

Pathfinders are again one of those units that get overlooked. They are pretty fragile and have to stay still to do their thing. However, when used in combination with the rest of your army they're deadly. In the early turns they can help your broadsides and missile pod teams rip through enemy vehicles by either making their shots more accurate or removing the vehicles cover save. The mistake I used to make with these was to only take a single squad. It's the classic 40K principle of redundancy here. By taking two or three squads you don't feel it so much when you lose the first squad.

There are several ways to use the markerlight hits but a couple no longer have much effect. One thing that might come in handy recently is to use a markerlight hit to ignore night fighting. Necrons rely on this effect to keep them alive long enough to get into range and the combination of ignoring it and then removing a cover save or hitting with deadly accuracy should upset them. The difficulty is that your pathfinders will need to see first to get their markerlights off.

Combining pathfinders with fire warriors makes both units worthwhile in my opinion. I use 9-man teams of fire warriors (for leadership reasons). When these squads can use a handful of markerlight hits they can become BS5 easily. That means you're getting about 10 wounds on your target marine squad. Probably not enough to kill a squad on their own but still nasty. Against hordes like orks or nids you'll be killing 12-13 assuming they don't have a cover save or if they've had it removed by other markerlight hits.

Conclusion
The tau army isn't packed with a variety of deadly options but it rewards generals who use their units in combination to get the job done. Concentration of fire is the key here. Against mechanised armies you can pick of transports early on with your superior range and gradually thin down the infantry as they foot-slog it towards you.

Knowing the limitations of your units is key here. I'm going to follow these unit discussions with a few tactical tips that I've learnt over recent battles.

Next post will be about the heavy support section and briefly about the special characters.
Posted by From The Fang at 17:00:00