Choosing a Tau Army - HQ and Elites (or XV8s as they're known!) 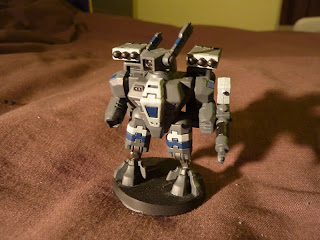 You may have noticed that this blog which purports to be a "Warhammer 40,000 Space Wolves Blog" has recently been focusing on Tau. At some point I'm going to do a bit of a redesign and change the layout and banners to reflect that I'm not just focussing on my wolves any more. Anyway, inspired by a couple of articles by EYIG at Apostates Anonymous (see my blog roll), I'm going to take a look at the options presented by the Tau codex. The rumour mongers don't seem to have any clue about what's coming when at the moment so currently the new Tau book could come as early as April or as late as 2013 or even 2014. To be honest I'm not sure even GW has decided so I'll just see what happens. In the meantime Tau players are faced with the prospect of dealing with armies with brand new books that are well suited to 5th edition with their rules that are circa 3rd edition!

Now I've recently posted some army lists up but I wanted to have a more general talk about the codex and what it offers in terms of vaguely competitive lists. Let me start by saying there is no "all-comers" tau list. Quite frankly outside of crisis teams the units just aren't flexible enough and each FOC slot has very limited options. This means that no matter what list you bring there's always going to be a few armies out there that you're simply never going to beat. This might not sit right with people but remember it's an old book that's struggling to keep pace with the new kids on the block. If you try and design a Tau list to combat a particular type of army you inevitably gimp it against other builds. Now this is true of most armies but not to such an extreme as it is with Tau. That isn't to say you couldn't win a tournament with Tau. I firmly believe you actually could. Call me delusional but if you met the right armies anything is possible.

This article (in several parts) will take a look at the FOC slots and the options presented in the book. I'll try not to put much bias on but inevitably I have a particular style of play that won't agree with other peoples' views. My motto when building an army is "all killer, no filler". I hate seeing things in a list that are either there as "speed bumps" or are just a place holder. Your opponent is unlikely to have throwaway units so why should you?

I'm not going to pretend this article is anything new because I'm sure there are tons of these things floating around as it's hardly a new book. However, I wanted to present my thoughts on the matter anyway.

HQ
Like many slots in the Tau FOC there are only a limited number of options here. Basically, your choices are an Ethereal or a Shas'o/Shas'el XV8 commander. Andy Hoare makes the decision for you really by making the commanders a 1+ choice. Frankly you're not going to want an ethereal anyway. Ethereals start off looking like a decent choice with an honour guard of BS4 fire warriors for 2pts per model (which will be fearless) and a re-roll on morale for any model that can see the ethereal. The problem comes when the Ethereal snuffs it (which he will). All Tau units must take a morale test or fall back. Brilliant. With pretty unimpressive Ld values throughout that'll mean about half your army legs it. Oh but it's OK because if they don't they'll get Preferred Enemy! Brilliant when you're only getting 1 attack each assuming you survive being charged in the first place!

The commander on the other hand is an excellent unit. I could write a whole other post about the pros and cons of Shas'o vs Shas'el but either is good. I like to make use of the option to take a bodyguard as they're all Shas'vre which means tasty hard-wired upgrades. I'll cover equipment in the next section but it's worth mentioning the special issue items here as your commanders are the ones most likely to take them. Offensively there's the Airbursting Fragmentation Projector (AFP to it's friends) and the Cyclic Ion Blaster (which has no friends). The AFP is essentially a large blast flamer with no cover saves. As with any blast template they're unreliable but nice when you hit that unit that either just disembarked or tried to assault a vehicle and is now clumped up. The ion blaster is a rending Assault 5 thingy that isn't awful but practically you're only going to rend once and struggle to wound otherwise with it's S3.

Otherwise there's long defunct command and control node, the positional relay which takes up a hardpoint that could be used for better things and vectored retro thrusters which are only any good for suicide commanders which I don't like. I can't see anyone ever thinking that a good way to spend 15pts is to buy a Failsafe Detonator or Ejection System which leaves just two more items. Iridium Armour would be better if it just gave a 2+ save without the reduction in assault phase move and the stimulant injector is OK but only one model in the entire army with FNP isn't going to win you a game.

Elites
Whereas most new books have tons of options here, the Tau codex shows it's age by again giving you just two. Stealth Suits seem like a great idea at first but practically they aren't much use. This is because their weapons don't have long enough range to make the most of their version of Night Fighting and they make a very expensive delivery system for a single markerlight otherwise. The main problem, however, is that the unit they share the FOC slot with is frankly excellent.

XV8 "Crisis" suits are a staple of any serious Tau army. I resent anything that's a "must have" in a codex but with Tau that's kind of inevitable. Crisis teams are brilliant because of two things. Firstly, their ability to Jump-Shoot-Jump (JSJ for the cool kids). This can be incredibly frustrating for your opponents. Position your suits directly behind a wall, jump 6" in your movement phase, get a clear shot in the shooting phase then jump back out of sight in your assault phase. It also means rapid fire and other short range weaponry can be used, safe in the knowledge that their won't be an assault to deal with next turn. Well, unless they're either fleet or jump packers or you're backed into a corner!

The second thing that makes them awesome is the sheer number of weapon combinations they can take. Very few units in any codex written since are quite as flexible with their equipment. You can kit them out for taking down light vehicles, scaring the crap out of terminators with massed AP1/2 fire or mowing down infantry with flamers etc. Let's have a quick look at the weapon options:
Burst cannons - not really worth it, they may be cheap but they aren't long enough range and don't do enough damage compared to other weapons
Flamers - good as a secondary weapon for when things get a bit too close for comfort or twin link them to do nasty things to infantry of all kinds. Only problem is you're guaranteed to get charged if you try this.
Fusion blasters - everyone loves a meltagun for 12 points.
Missile pods - always twin-link them to mow down rhinos or upset MCs
Plasma rifle - like a plasma gun but S6 so not as good vs vehicles but just as good against troops

The joy of the crisis suit is that they're relentless. There's plenty of different builds knocking around the internet with cool names like Deathrain and Helios but I take them in one of two flavours. Firstly, a cheap and cheerful pair of Shas'ui with twin-linked missile pods and flamers at 94 points. They reliably take down transports and offer something once troops are nearby. Even Grey Knights don't like having to make a lot of saves from flamers. Some people replace the flamer with a targetting array to make them BS4 but with twin-linking this doesn't really make much difference (88% not 75% to hit) and ups their cost by 12 points a squad. The flamer is certainly last ditch but it's amazing how useful it is.

The other build I favour requires the slightly more expensive Shas'vre. In order to take a squad of these you need to get them as a bodyguard for a commander. Looking at the basic stats, 10 points more for one extra point of initiative and WS seems like a rip off but the key is that this unlocks the hard-wired support systems. This means you can add shiny things without losing weapons. The most important of these is the multi-tracker which allows you to fire two weapons per turn. My preferred build is plasma rifle, fusion blaster, shield generator and hard-wired multi-tracker. Not cheap at 184pts but combined with a commander with the same equipment and they're lethal to marines and terminators alike. Their fusion blasters can also help them deal with heavily armoured tanks if you get chance.

You could consider swapping the shield generators for targetting arrays but personally I'd rather keep them alive than give them one turn of accurate shooting before they're gunned down. I often use markerlights too which make targetting arrays a waste of points. If joined by a Shas'o they can present 8 wounds with 3+/4++ which has the potential to really hold up any unit that assaults them. I think if you're investing so many points in a unit you want it to have a decent shot at survival.

Conclusion
Two slots down and two units to avoid. There's going to be plenty more where they came from! However, we've also got a couple of fantastic choices too. Using commanders and crisis teams well is crucial to success with a Tau army. If you decide not to splurge your points on the plasma/fusion teams then you should go for a Shas'el with twin-linked missile pods and perhaps a fusion gun for cheeky vehicle kills late on in the game. That makes him just 80pts which frees up a lot of points for the rest of your list. Mind you, I really think it's worth trying out a team or two of the low-AP boys and smiling as you wipe out marines and hop back out of assault range. Deep striking is something to consider against certain armies but often deploying everything presents your opponent with an array of choices for what to take down first.

I'm not saying that these are the only suitable builds for crisis teams, rather they're just the ones I've had most success with. As with all of my articles on tactics and army building it really depends on your style of play. Some people like suicide units which are designed for maximum devastation for minimum points but I'm just not a fan.

Finally, I want to make a point about drones. There's an argument for throwing in a couple of gun drones with your suits to provide them with ablative wounds. The difficulty is that when you lose one you'll need to take a leadership test and you'll probably fail it! By making the most of JSJ your suits really shouldn't be taking too much fire. In combat your drones won't save you either.

Tomorrow we'll move onto Troops and Fast Attack since, again, they rely on each other to be effective.
Posted by From The Fang at 20:46:00