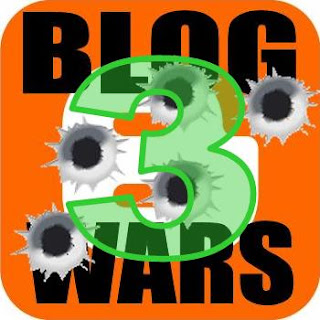 As mentioned in previous posts I was pretty pleased with how Blog Wars 1 & 2 went so I thought it would be rude not to have a Blog Wars 3! The event will be held at Maelstrom Games on Saturday June 2nd 2012

The feedback I received from BW2 was that people liked the custom scenarios and so I'm keen to keep them for BW3 with some minor alterations. The scoring system needs a little tweaking so that the primary mission has a bit more weight than the secondary. The compulsory Special Character rule will be staying. I think it's one of the things that sets Blog Wars apart from other tournaments and I don't want to lose that.

Feel free to disagree but I think the first two tournaments succeeded in the aim of creating a friendlier tournament atmosphere where there was still fierce competition but without the usual "issues" associated with it!

The packs will be released nice and early this time around (hopefully early next year) so that people have a lot more time to prepare. Similarly I don't see much harm in putting the tickets up for sale earlier this time so that people can plan their lives around it better. As ever I'm hoping for a decent turn out but I'm keen to keep things managable (so that I can still play mainly!) and therefore I'll be capping ticket sales at a suitable level (to be decided). Tickets will remain at the very reasonable price of £15 and there'll be the same guaranteed prizes with more depending on ticket sales.

I had toyed with the idea of making it a full weekend but decided against it for two main reasons. Firstly because I'd still like to play in it and a full weekend would probably be too much of a commitment. Secondly, I think that a friendly tournament needs to be a single day affair.

As ever I'm open to comments and criticisms. What was good about the first two tournaments? What would you like to see changed?

The most important thing is that we don't let Andy (Venerable) from Sons of Sanguinius win it again! Unfortunately, I have a conscience, which means I can't fix it so that he ends up playing a horrible list in his first game. Therefore it's down to you lot to make sure he doesn't manage it at Blog Wars 3!
Posted by From The Fang at 17:18:00