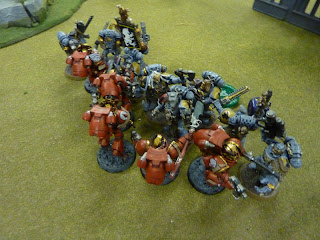 Finding myself down on table 9 I thought I'd be repeating the performance I put in at the first Blog Wars. When I found myself against Blood Angels it seemed even more likely. I've had plenty of bitter experience against Matt's BA but only minimal success.

My opponent in the final game was Paul O'Boyle from Faulty Dice and his Descent of Angels style Blood Angels list:

Paul won the roll off but surprising allowed me to be the attacker in this final custom mission which has 5 fixed objectives, 3 of which start in the control of the defender. With a list full of deep strikers it made sense to bring them in later on and take some objectives.

I spread my force out across the deployment area. A long fang pack on each side with a rhino each in support. The thunderwolves sat in the centre so they wouldn't be too far from any threat. Paul placed his sanguinary guard on his left flank with a priest and librarian in tow. One of the assault squads sat behind a building holding the objective on Paul's right. 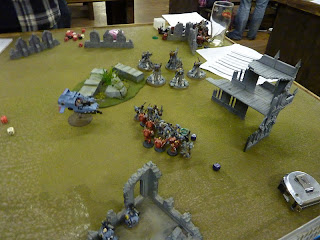 I slammed Arjac's pod straight in next to the squad hugging an objective and advanced the rest of my army forwards at full pelt putting a rhino on each of the objectives near me. Arjac's squad rapid fired into the blood angels and without any FNP all but a handful were killed. My rune priest attempted a Jaws attack on Paul's librarian and sanguinary priest but the psychic hood stopped it in it's tracks. In Paul's turn they charged into Arjac's grey hunters but failed to cause much damage and were smashed by Arjac's hammer. The Sanguinary Guard advanced towards the rune priest's rhino and managed to wreck it.

In my second turn I consolidated Arjac onto the objective and then set about firing on the sanguinary guard. The grey hunters and thunderwolves stood ready to charge a squad each. The long fangs scored a trio of krak missile hits on the squad with the priest and Paul had to make a choice whether to remove the priest and hope the TWC would be out of charge range or keep him and suffer a definite charge. He opted to remove the priest but sadly found that the cavalry were still in range. Charges from both the TWC and hunters easily dealth with both squads with minimal losses and the board was clear of BA. Now I'm not sure what the rules are here since I always thought you had to have something on the board to bring reserves in but nethertheless I said Paul should play on anyway. I now think that you get your reserves anyway but we played it that way so it's ok.

In Paul's turn 2 he only got one of his vanguard squads which came in and charged the rune priest's squad. Sadly with the rune priests runic weapon, mark of the wulfen rending and power fist from the wolf guard they again died without doing much damage and the table was again mine. In turn 3 I kept my three hunter packs on their objectives and moved the TWC into the middle of the board to react to any deep strikers.

Paul now got the remainder of his army which came down near Arjac's squad. Dante and co thinned the squad out with fire before the vanguard charged into combat. Unfortunately for Paul Arjac's hammer struck well and finished the veterans off after they'd killed a few grey hunters. It was now all down to Dante! If Dante could kill off Arjac and hold his objective Paul could still force a draw (as SCs holding objectives scored double).

In my fourth turn I advanced the remaining rhino and the TWC towards Dante in case Arjac couldn't do the job. Arjac's squad was severely depleted which meant they were unlikely to survive Dante. Dante fluffed a lot of his attacks as did his squad but Arjac still found himself with only the standard bearer for company. The standard bearer fluffed all of his attacks so it was up to Arjac. He managed to cause 4 Blood Angels deaths and pass one of his armour saves from the BA fist which meant that the combat was won by 4 to 3. Dante rolled 10 for the leadership test and with the -1 he fled from the board. In turn 5 I'd be able to let the drop pod "chase" him off the board so Paul ended it there. A tabling gave me 5 TPs and I hoped I'd get the full 5 for VPs too. Sadly the combination of half of Arjac's squad (quite a lot of points) and the rhino meant I was 56 points short of the 1600+ needed but I was still pleased with 9/10 TPs especially when no-one at the event had taken the full 10.

Conclusion
Paul was pretty unlucky not to do better in this game. The combination of grey hunters and TWC charging is a lot for any force to deal with my rolls were spot on in doing enough to kill everything in the sanguinary guard squads. At the end of turn 2 with only a couple of squads left it never looked like going any other way. I can't pretend I didn't enjoy wiping out BA after soo many losses to Matt's.

Despite the result Paul was an excellent sport and hopefully we'll be able to get together at Maelstrom for more games in future. 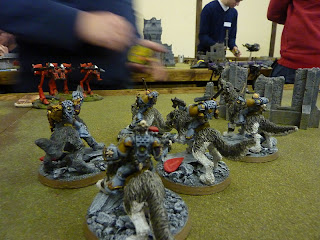 Overall Conclusions
The missions all played pretty well I thought. In general I'm pretty pleased with the scoring system as I thought the scores (in my games at least) represented how the games actually felt. Frank and I taking one point each made it a draw and thats how it seemed. A few people commented that the primary missions should've been weighted more highly so that you still got a win if you played the main mission better. I think this is fair and it's something I'll look at before BW3.

Most people found the final mission to be pretty balanced I think and I like how the attacker must advanced or he'll not be able to remove the defender from his 3 objectives nor will he be able to claim his two. I'll have to wait until I read more of the battle reports on other blogs before I make my final decisions about what needs changing but I have to say I don't think there's much.

My list performed exactly as I thought it would. Both Arjac's drop pod squad and the TWC can be very hit and miss. In games 1 and 3 they were a definite hit accounting for the vast majority of the damage between them. In game 2 they got their "miss" where sheer weight of fire prevented them from getting stuck in. I'm pleased I took the TWC as they made the games a lot more fun than another squad of long fangs and grey hunters would have. In my next few tournaments I'm going to be thinking about Dark Eldar so it was a good way to end my current SW campaign. The DE still aren't painted though so there might be an orky stop gap until they are!
Posted by From The Fang at 17:00:00