Where Have I Been for A Month?

Woah it's been a long time since I posted. Been struggling to motivate myself to blog recently. I've had trouble finding inspiration before but not normally for this long. Here's a quick round up of what I've been up to. 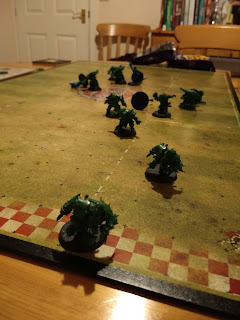 Blood Bowl
The biggest thing recently was the re-release of Blood Bowl. I've loved this game for years and in fact it was the first GW game I played back when I was in primary school so must've been early 90s. I was excited for the re-release but didn't intend to pick up a copy. Trouble is, at Fluffageddon the Outpost had an open copy and I was suckered in by the pretty new pitch, templates and models. I always intended to paint my human team from the old box but never got round to it. I'm planning on painting the new ones though for my Nuln Oilers team. I've picked up an extra sprue from eBay because we all know I'll need some reserves!

The problem I've always had with Blood Bowl is that it's much better if you can get a league going. I've toyed with joined various club leagues but never have done because I can't commit to a regular night. That's meant trying to organise mini-leagues amongst my friends. We had a fun day in a pub once playing a mini-cup and managed a couple of sessions of a 4-man league but whilst Matt and I were still keen the others lost interest. We're hoping to try again though with two different people. We'll start with a 4-team league and then maybe get a second team each if the new guys are more bothered.

I've already had a few games with just the core set. My sister-in-law's boyfriend was over from Ireland for my son's birthday so we got a game in before he left. He really enjoyed it and picked it up quickly (and beat me 2-1) but obviously I'm not going to get regular games in with him for geographical reasons! I also played my colleague Steve a week a go and he seems interested. I've told him to pick up a copy of the PC game to learn the rules and see what he thinks.

I really hope we can get something going. I think Matt and I will resort to just having three teams each if we can't get others involved but it'd be a shame.

X-wing
I'm still in love with this game and finally got around to getting some games in with Matt this week. I tried out a new squadron with Corran, Poe and a bandit with some new upgrade from the Heroes of the Resistance set. Trouble was, Matt was playing an Imperial Aces list (Darth, Ryad & Delta) that had high PS and cost lest than my list so he gave me initiative making my arc-dodging tricky. His first roll against Poe was lucky too stripping all his shields before I'd even gotten a shot off. In the second game I tried my first Scum list using mostly stuff from the Most Wanted box and the Starviper (yes, I bought it for Autothrusters like everyone else). He was running a Palp Aces list and I simply didn't have luck on my side. Was a bit stupid with my Y-wing and ended up in too close to use the TLT but was pretty one sided anyway. 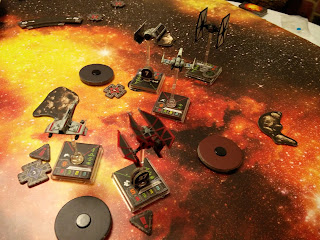 That's the trouble I have with X-wing. Since we moved into the realms of competitive play I want to try out lots of different lists but I simply don't get enough games in. I'd like to play more tournaments to get a feel for how good my lists actually are. It's the same as with 40K, Matt runs strong lists and plays them well but they aren't necessarily representative of what I'd play in actual events. It'll probably be in my resolutions to play more X-wing (I think it was last year mind you, I suck at keeping my resolutions).

Gorechosen
After our games of X-wing Matt and I had a quick game of Gorechosen to round out the evening. Matt managed to get a painted set from eBay for a reasonable price so we took two heroes each and set to it. After my X-wing losses I was pleased to kill both of his champions before losing either of mine (the second one died to a decapitation). I then fought mine to the death of course! 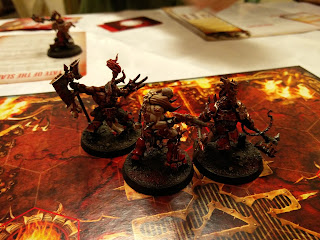 It's a fun little game and makes a nice break from playing other stuff. It'd be good with four people and the mechanic is well thought out. GW can really make some excellent standalone games when they set their mind to it. I wish they wouldn't churn so many out instead of fixing 40K but still, they're enjoyable nonetheless.

Garage Conversion
I'll post separately about this on Sunday but work continues apace on my gaming garage project. I'm really looking forward to it being finished now which should hopefully happen in the new year. I'd hoped it'd be done by Christmas but since I'm working this weekend and then in Ireland for Christmas week that isn't going to happen. Anyway, as I say, I'll post more about it on Sunday.

Clearout
When I dismantled my old gaming table I realised just how much stuff I'd been hiding under there and around my spare room. I'm determined to sort through everything before I move into the garage. That means getting rid of some stuff too. There's tons of bits still on their sprues that I'd like to trim off and sort though. Maybe I'll stick some of them on eBay. I'm also having a debate with myself about my DE army. I really struggle to want to play with them with how useless they are right now. Sure, there's lists that work but they really aren't much fun at the moment. It'd be a shame to get rid completely. There are still days when I lament selling my Eldar army and I've put a lot of work into some of the units. Maybe slimming down the army is the way to go.

Right, that'll do for tonight, I've got presents to wrap whilst the missus is out. I'll post again over the weekend about the garage but hopefully I can find the time and inspiration to post more again over Christmas. I've at least got to write the obligatory review of the year and hobby resolutions but that'll be pretty depressing affair I think! Roll on 2017!