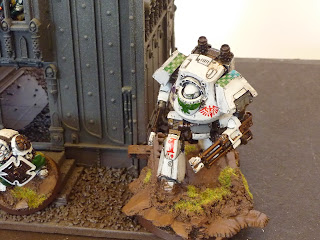 Matt and I have a shared nemesis in Frank Marsh. We've both played him at various tournaments and all of the games have been pretty close and hard fought. He's been along to Blog Wars several times so when he invited the two of us down to London for Wrath of the Titans we figured it'd be rude not to show up. This was in spite of the 2.5 hour drive and lack of sleep I'd had the night before!

I was taking a modification of my now standard mechanised Tau:

Onto the battle reports which will be pretty brief as I'm busy sorting stuff out for Blog Wars so I don't have time to go into too much depth.

Game One - Tau vs. Dark Angels 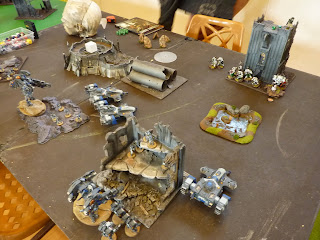 The first mission would be Purge the Alien on Dawn of War deployment and I was facing Adam Cunis and his beautifully painted Deathwing list. The army was impressive for two reasons, firstly because they're all converted to "true scale" and secondly because he bravely decided to paint them white!! Adam went on to win the best painted army and deservedly so. Stunning models aside I wasn't especially thrilled to be playing an elite army for this particular scenario.

When I won first turn and Adam failed to Seize I felt pretty confident. I'd need to aim for maximum points though including all of the secondaries and there were only 8 units in Adam's army. The crisis team took down the dreadnought for First Blood, one riptide killed all but the sergeant in the devastator squad and the other riptide took down a good chunk of the deathwing knights. That meant that most of Adam's long range fire was out of the equation and therefore my transports should be pretty safe. Of course that was until Belial and his unit arrived and easily wrecked one of the devilfish on my right flank. 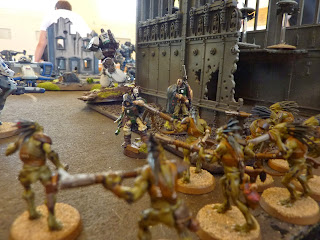 Sadly for Belial his success was short lived as my command unit, the crisis team and one of the riptides combined to severely deplete his squad and take him down in the process. The following turns consisted of me slowly advancing and chipping away at his remaining forces. The cover saves from the scouts in the bolstered ruin kept them alive a long time but couldn't prevent the inevitable. In a last act of defiance the remaining two scouts attempted to charge my kroot only to be cut down by overwatch and complete the tabling. With all three secondary missions and only a single devilfish down (a squad of kroot managed to regroup before the end) the game ended 11-1 to me. 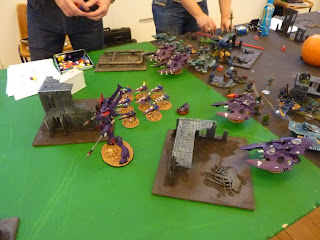 Having rushed my lunch (as no one told me just how far away KFC was from the venue), I wasn't thrilled to be facing a pretty mech heavy Eldar list with bikes on the side. My army struggles against AV12 so this wasn't going to be much fun.

We were playing Crusade (3 objectives) on Hammer & Anvil. It wasn't an especially bloody affair as most of the time my opponent sat at range and blasted away at me. I lost a few pathfinders early on but they spent most of their time out of range anyway so I struggled to do damage. I actually killed more in my opponent's turns than I did in mine with the riptides combining to kill a Crimson Hunter that arrived from reserve to give me First Blood. The wraithknight simply wouldn't die as he was Fortuned most of the time. The kroot helped me deal with some of the jetbikes but I knew I wasn't killing them quick enough and they'd swarm the objectives. 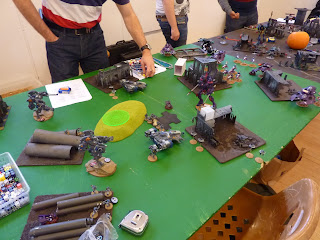 I never had much chance of claiming Slay the Warlord as his Farseer was buried in a squad of bikes. My commander tried to arrive on turn 2 and take out some wave serpents but scattered off the board and was Delayed. He then didn't reappear until turn 4 which ended up being the final turn (not sure how long the games were meant to be but they felt rushed). My objective was neither controlled nor challenged so his objective and the central objective would be key. 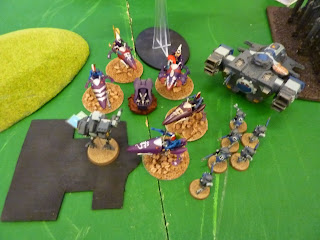 At the end of his final turn he had the central objective ringed with bikes preventing me from getting within 3" to contest. His objective was controlled by 3 bikes and 5 dire avengers. In order to win (thanks to First Blood and Linebreaker) I'd need to contest both objectives. In the centre I was able to kill a single bike to allow my remaining crisis suit to use his thrust move to contest. The attack on his objective didn't go so well. I'd tried to deep strike my Commander near enough to use his Thrust to contest but he scatted 8" meaning I'd need a double 6 to be in range. I'd therefore need to kill (or at least force them to run) his bikes and dire avengers. I made short work of the dire avengers with the commander but the pie-plates from both riptides scattered off and the rest of my shooting (from fire warriors and kroot) was saved by the bikes 3+ armour giving me a 2-4 defeat. Ultimately my inability to kill stuff in the earlier turns was my down
fall but at least I'd made it close. 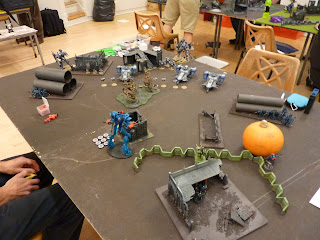 Having so narrowly and frustratingly missed out on the win against Eldar in the last game I was less than thrilled to be playing them again. Luckily this list didn't involve any mech but there were some bikes again which would prove to be my undoing. There was another wraithknight too!

We'd be playing Emperor's Will on Vanguard and I took first turn. This basically meant the only thing my opponent allowed me to see was the wraithknight who only took a single wound despite my best efforts. This was largely down to the riptides failing to wound with their ion accelerators. My opponent fired everything he could into one of my devilfish to try and claim First Blood but left it on a single hull point. This meant he had to charge his mantle Autarch into it to finish it off. The autarch unsurprisingly bought it in my next turn but losing First Blood was a major blow. My opponent now had no need to come for my objective so I'd need to push up the field as quickly as I could whilst avoiding a charge from the wraithknight.

This turned out to be the main issue. The kroot arrived and were pretty lucky in gunning down most of his dark reapers. Eldrad now had to survive fire from the commander and his unit who arrived nearby. Frustratingly the way the dice were rolled he failed Look Out Sir! rolls but passed the resultant invulnerables. Had I killed a single further Dark Reaper and those 1s would've been his invulnerable save rolls. Eldrad was then able to charge into a squad of kroot and use them as a safety net for the rest of the game. 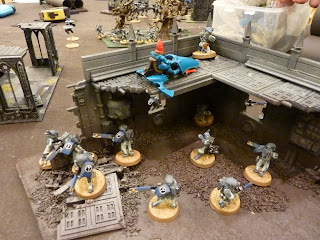 The wraithknight turned it's attention to my commander and vaporised his bodyguard. The commander tried to finish off some bikes before his inevitable demise but it wasn't to be. Once again I was barely killing anything. I'd managed to kill off some rangers near my objective but a squad of bikes which arrived from reserve made enough saves to keep a single model alive. In the end I knew if I couldn't kill it my objective would be contested.

At the other side of the table my riptides charged a unit of guardians on his objective, forced them to run and used the resulting consolidation move to contest his objective. Back at my side of the table one of my devilfish needed to kill his remaining jetbike but triple one was the roll to hit! My only hope then was that I'd arranged my models around the objective well enough to prevent him from getting into range to contest. Sadly I'd missed a spot and he was able to drop a bike on the floor above my objective and give him a 3-1 win on secondaries. 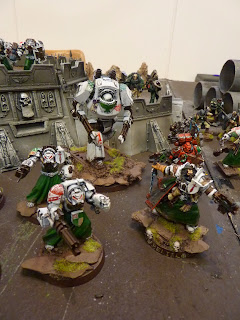 The final game was probably the most frustrating game of 40K I've ever played (the second game wasn't far behind). The reason for this was that if one of about twenty different little moves I tried had come off then the result would've been different. Everything I attempted to do seemed to fail miserably. There were several times when a single model survived from a squad which was enough to cause major problems.

One thing that made things worse was that with the Wraithknights having wraithcannons I felt the need to nova for 3++ in case my opponents rolled that crucial 6 to wound and cause instant death. Unbelievably both Eldar players largely ignored this capability so I should've been using Nova for offensive capability. The only time a wraithcannon was fired at a riptide was when one of them planned on charging. He did get a 6 but I passed my 5++ save and he failed the charge. The rest of the time they were fired at my vehicles which probably could've been destroyed by other stuff.

The first game was undoubtedly a mismatch and fair play to Adam for making it enjoyable when he had every right to be miserable. I was pretty pleased with how close I'd managed to make the Eldar games with some last turn tactical genius. Obviously the pressure would've been off if I'd played the rest of the game better but to come so close to winning both games was good. It's just a shame neither final push worked. Hopefully Blog Wars will be a lot less frustrating!
Posted by From The Fang at 18:00:00