First off this is apparently post number 400 on this blog! That's somewhat disturbing really. Even more worrying when you consider how many words are in my usual posts!! I've probably written enough on here for several doctoral theses! Time well spent..... perhaps.

Anyway, thanks to everyone for sending in their army lists. If you haven't received an email from me it means everything is fine with your list. Those who've received queries regarding minor errors please get back to me as soon as you can. I've updated the Blog Wars 6 page with the armies that everyone is bringing. As usual though I'd like to look at the spread of races represented at BW6 and that of course means pie charts!!

Before you take a look at the new charts perhaps you'd like to remind yourself what the situation was like at BW5. Grey Knights, Tau and Tyranids were the most popular choices back in June. This wasn't surprising in some ways as the new Tau codex hit in April but on the other hand the number of Grey Knights armies was somewhat unexpected. Anyway, here's the spread of races at Blog Wars 6 (click to make it more legible): 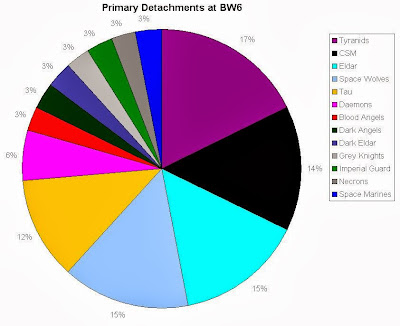 Tyranids, CSM, Eldar and surprisingly Space Wolves dominate the field. In the past the prevelance of Space Wolves armies could be put down to From The Fang being about them but that isn't really the case these days. It's remarkable then that one of the few armies left in the game without flyers of any kind and with little anti-air capability are still popular. It'll be interesting to see how they fare as their book could be considered an older codex now.

Tau are still popular which isn't surprising really. I'm intrigued by the number of CSM armies when they aren't considered competitive these days. I'm surprised there aren't more Space Marines with their new shiny codex but perhaps people haven't had chance to put their armies together in time for the event. There's only a single Necron army this time around too despite their ability to hold their own even with the new books.

There are slightly more players bringing allies this time but no major shift. Here's the chart: 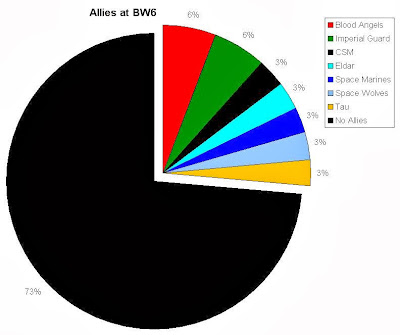 Nothing particularly astounding to report here. More Space Wolves though! You'll do well not to play them at some point this weekend. If you take out the Tyranids (since they can't take allies) then about a third of the armies have allies.

Generally speaking the most likely opponents for your army (in no particular order) are Tyranids, Space Wolves, Tau, Eldar and CSM. It'll be interesting to see how well my Tau do against that field (or not).

Finally, onto the Special Characters and it isn't hard to see why Malan'tai was doomed when their doom appears 5 times at Blog Wars 6!! It'll be interesting to see the conversions on offer. Fair play to the accidentally original Tyranid player who's taken Deathleaper instead!! Otherwise two each of Arjac, Eldrad, Farsight, Fateweaver, Lonstrike, Shadowsun and Tigurius. There's quite a mixture of characters around though with 39 in total (several armies have multiple SCs) and 27 unique characters will be represented at least once.

I'm pleased that probably my favourite character, Arjac Rockfist is represented twice. He's one to watch out for.

Friday Night
There wasn't exactly a deluge of responses about Friday night so I'm not going to run a formal event. There are about half a dozen people around the night before the main tournament though so if you guys wanted to head down to the venue and play pick up games as warm up then go for it.

Rules Queries
There were a couple of questions about the scenarios that I thought I'd post up here in case anyone else was wondering the same thing. Firstly in the Purge the Alien style game the VPs are calculated based on the points value of the units killed in a similar way to 5th edition i.e. units at 50% starting strength and below count for 50% of their points (rounding up). In the case of armies that can spawn models such as Tyranid tervigons and Daemons portalglyphs the spawned models are worth their usual codex values and should be included. This means there is the potential to score bonus VPs above the theoretical 25 VP maximum.

Secondly, the nominated special character counts as scoring in the objective missions which means he also counts as a denial character even if he wouldn't normally i.e. Longstrike in his hammerhead. He can be used for Linebreaker in this way too.

If there are any further queries about the scenarios or 40K rules in general please either comment here or email me and I'll give a ruling.

Conclusion
Having seen the armies that will be in attendance Blog Wars 6 is shaping up to be very interesting. With the player count standing at 34, this is the biggest event yet. I'm looking forward to it immensely and I hope you guys are too. Only 11 days to go!
Posted by From The Fang at 13:49:00