Unbelievably there's only a month until Blog Wars 6! It hasn't half come around fast! Luckily I'm taking a very similar list to last time so I'm not having to do any last minute painting but good luck to any of you that are!

The good news is there are still a few tickets left for the event. For those who don't know about Blog Wars here's a quick rundown:
More than half of the tickets have been sold but if you'd like one their £15 each and can be purchased by either using the contact me link or simply clicking on the PayPal button.  I'll be confirming some of the prizes in the next week or so (when I buy them!) but as ever there'll be plenty up for grabs. Full details are on the BW6 page which can be accessed by clicking on the logo to the right.

Food
There were a few issues with the food at BW5 with some people waiting a while to get theirs. I've been speaking to Darran at NWGC tonight and he says they've had a complete overhaul of the cafe and at a recent event with 30+ people everyone was served within 10 minutes. Sounds a lot more promising I'm sure you'll agree. Food choices will probably be something like spaghetti bolognese, curry or burger and chips. That kind of thing anyway. Obviously I leave it up to you guys to let me know if you have any specific dietary requirements.

Friday Night
I know a few people came up to Stockport the night before the event last time around. I'm actually off work on the Friday so if there are enough people around I'd be happy to run a bit of 40K in 40 minutes (or similar) for a pre-event warmup. I'll email everyone who's bought a ticket in the next few days and see if there's much interest. If I were to do it then there would, of course, be generous prize support for a minimal entry fee. 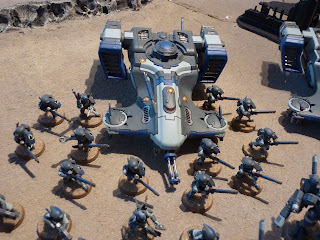 Just a quick note about mechanised Tau. I've been toying with the idea of a mechanised list for BW6. The motivation for this was two-fold. Firstly I think that with the shift to infantry based lists recently there are a lot of armys now that struggle to deal with massed AV12. Secondly, whilst there's no denying the static gunline with Ethereal is effective, it isn't exactly much fun to play with or against.

Anyway, I've had a few games with my mech Tau recently so I'll post up some brief battle reports and after action thoughts when I get around to writing them up (GTA V is taking up a lot of my time at the moment!).
Posted by From The Fang at 20:29:00