Target Sighted was a 3 game, 1500pt singles 40K tournament held at The Outpost in Sheffield. As I discussed yesterday the custom scenarios were a little open to abuse but what worried me more was that there were something like 18 players and I'd seen a couple of Daemons and Necrons power lists that I really didn't fancy facing. Matt was his usual miserable self about playing those sorts of lists too. Frankly, I felt certain I'd end up facing at least one of them so was fairly philosophical about it.

I'll cover my games in three separate posts because all 3 (perhaps not game 2) were interesting and worth exploring further than I could do in a single post. The important thing is that Matt actually managed to win the tournament out right. Not only was he the only person to win all three games but he also got Bloodiest General netting him a total of £40 store credit! Now normally I'd be saying he was lucky, played some easy opponents or otherwise didn't deserve his victory but sadly I can't say any of that.

In his first game he played another GK player who'd got paladins, a dreadknight, etc. Matt tabled him. He then played Scott Nicholls who's a pretty strong player, certainly in this region (not sure where he ranks in the formal rankings). Scott was using the currently ubiquitous combination of screamers, flamers, plaguebearers and Fateweaver. Fortunately for us that sort of thing is soon to vanish with the new codex. Anyway, it's a strong list controlled by a good player. Now Matt had some luck in that he didn't get his Preferred Wave and Fateweaver didn't show up until turn 4 but the combination of Warp Quake and good Divination rolls allowed Matt to secure a hard fought, well deserved, victory. In his final game he played on Table 2 against a Necron list that despite not being the classic flyer spam, still have plenty of units that would cause him problems. Matt secured victory and with the top table drawing (I think) he was certain of winning even before the results had been announced. Fair play to Matt and congratulations. 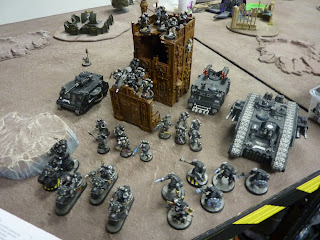 In the painting competition Jamie's Iron Hands managed to win him the Best Painted award for a second time (the first being at Blog Wars 3). The army has some beautifully executed conversions, line highlights that must've been soul destroying work and generally looks the business. Congratulations to Jamie. Here's a few shots of his stuff and you can read about his other armies (there are many) over on his blogs here and here. 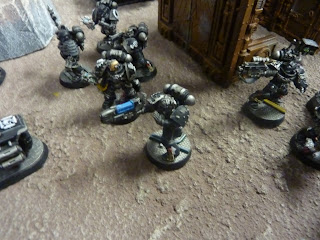 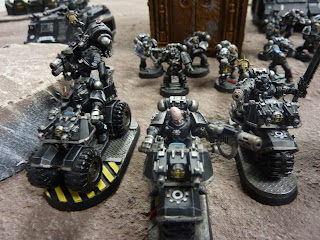 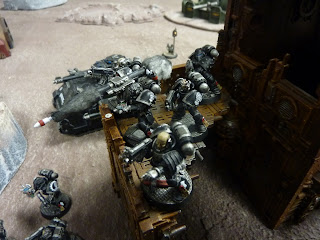 Of the three of us I was the one who let the side down without coming away with any prizes but suffice to say I had a pretty enjoyable tournament. I have to say I've changed my mind about the venue. The scenery was much better than it was before (perhaps the 40K stuff wasn't out when I went last), the staff were great and the atmosphere was good. Lunch was at the Mexican kitchen down the road and seemed to be well received by all. Whilst it's a shame that there aren't more tables and that a couple are downstairs, it meant the atmosphere was pretty friendly in a similar way to the first 4 Blog Wars.

Hopefully at future events they'll run the missions by someone who knows how 40K players think in terms of trying to break the missions! I've said I'm happy to do this is they like as I'm fairly au fait with the dirty things that players come up with.

Over the next few days I'll run through my games so stay tuned for them.
Posted by From The Fang at 20:00:00