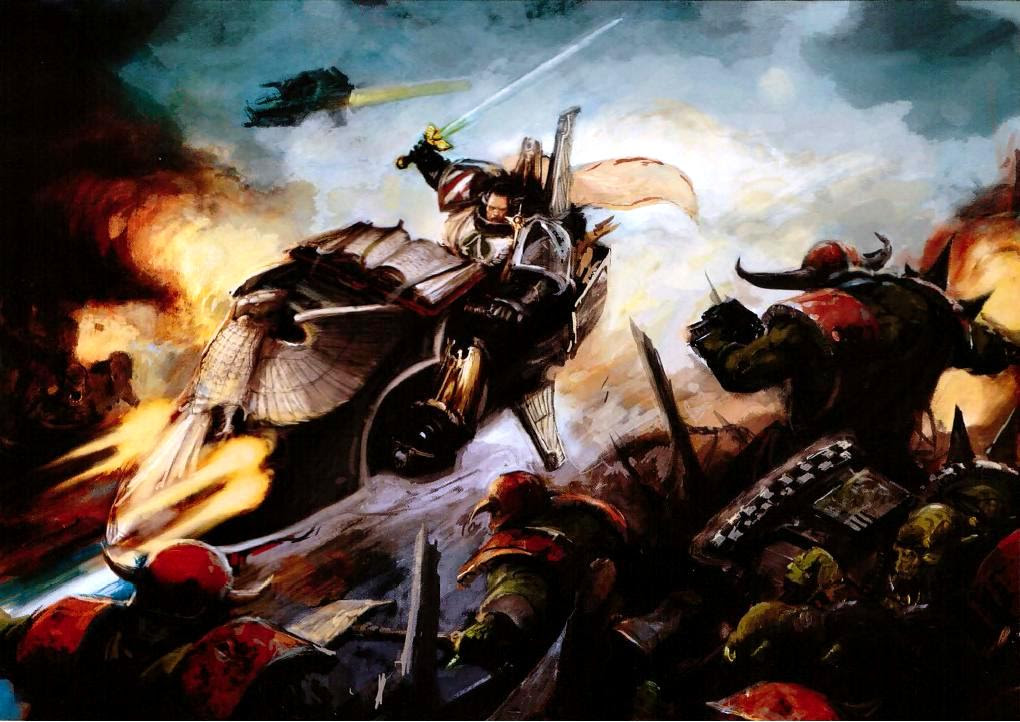 I've not had a great deal of opportunity to test out my Dark Angels but a combination of the couple of games I've had and general reading round on the internet has led me to think that I'm right in my wariness about fielding Deathwing. Don't get me wrong I love terminators but every time I try to write a list with some I picture myself rolling a pile of 1s! I may find a way of getting them into a list but at the moment I think I'm just too excited about the idea of tons of bikes zipping around. Here's my current effort:

I've dropped the flyer from my previous list because it's well established to be more than a little shitty. I've ditched the 4-man RW bikes and the attack bikes too. The attack bikes are an easy First Blood for my opponents and aren't much of a threat except for a flukey vehicle kill. The most obvious difference is that it's no longer pure ravenwing. The tiny bit of "green" comes in the form of the tacticals. The tacticals just boost the number of bolters I've got for the banner and hopefully we be ignored because of all the bikes zipping around.

The deathwing knights are a new addition. Now I can't pretend they're in their for much more than the fact that I love the models but they could be great in the right situation and at worst they're at least a decent distraction away from my bikes! Haven't tried them yet though so they might end up getting dropped.

Sammael and the librarian can join either the black knights or the command squad depending on my opponent. The librarian has mastery 2 to help him get the more useful Divination powers. In a wierd way the darkshroud and bolter banner work well together. Both need to be priority targets for my opponents but by having both it goes some way to protecting the other. Frankly neither is likely to last long but hopefully after the first couple of turns it won't matter too much about either. There's nice synergy with the grenade launchers and the banner too. Imagine getting one or two rad grenades on a unit and then unleashing 24 twin-linked bolter shots from a single bike squad! If I get two grenades that's something like 18 wounds which cause instant death!!

In general this list seems pretty decent. There's 10 KPs in total which is pretty damn good at 1,850pts. It could be reduced but I don't think many of them are easy for my opponents to take except maybe the darkshroud. That's probably my only real risk of losing First Blood. In objective games I can have a potential 8 scoring units. A little less than my previous lists but still should be plenty.

The obvious weakness of this list is dealing with flyers. I've thought long and hard about this and realised that without allies (which I'd like to avoid for aesthetic reasons) there's very little I can do about them anyway. The Nephilim is likely to end up losing a duel with another flyer and the quad-gun/flakks aren't reliable enough against AV12. I'm just going to bury my head in the sand and pretend they don't exist, OK?

The biggest problem is that none of this is painted at the moment and some of it I don't even own yet, namely the black knights! There's something like 20 weeks til blog wars which is basically a unit a fortnight. I think it's do-able but I've said that before! The list will probably evolve over time but I think I'm pretty safe painting my bikes up for a start. Stay tuned for pictures if/when I get them done.
Posted by From The Fang at 19:31:00