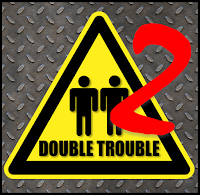 Tickets are now available for Double Trouble 2 which will be happening on Saturday June 10th 2017 at the NWGC in Stockport. The venue has recently had a thorough refurbishment so I'm looking forward to playing there after years playing there before the improvements.

The event will follow the same general format as the last one with a few minor changes. I'll go through what's new below but first a summary for those who couldn't come to the first one or simply weren't aware of it.

What is Double Trouble?
Double Trouble is a Warhammer 40,000 doubles tournament with a difference. Instead of writing an army list together with a partner, each player will write their own 750pt army list from the faction of their choice. Before the first round you will be randomly assigned a doubles partner and play against another random pairing. The allies chart will not be used therefore all combinations will be treated as "Battle Brothers".

At the start of the next round you will be assigned a new random partner and if I manage to do the draw correctly you shouldn't end up meeting the same person twice in the day either as your partner or as one of your opponents. This means you'll get to play three games with 9 different people and hopefully a good variety of armies.

Tickets
Tickets are on sale now and cost £17.50 per person with 40 spaces available initially. If demand is high I can easily extend this to more but we'll see how things go. Your ticket entitles you to 3 games of 40K, lunch, free entry into the raffle and, a chance to win spot prizes throughout the day.  To purchase tickets, please send £17.50 per ticket to alexjbrown58@hotmail.com via PayPal (using the Friends and Family option). Please include your preferred contact email address along with email addresses for anyone else you're buying a ticket for. Please also include the dietary requirements of everyone you're buying a ticket for (even if it's just to say there aren't any). If people can include these things from the start it makes my life a lot easier, thanks!


*Note that Astra Militarum have a small exception in that you may take two Infantry Platoons but each Platoon can only include three infantry squads (allowing six per Force). The other components of the Platoon are excluded from the no more than two of a unit rule.


Imperial Armour/Horus Heresy armies and Forge World 40K legal units ARE permitted. That being said, armies must still comply with the above restrictions.


The scores for each doubles pair will be recorded with each player in the pair getting the same score. There will be no secondary objectives in play e.g. Linebreaker, Slay the Warlord etc.

Contingency for Drop-outs
There's nothing worse than being told you've received a bye when you were hoping to play three games of 40K for your money. Here's what I propose:


I think it's important to have this contingency plan in place so that people feel reassured that the system will work and everyone will get their three games.

Prizes (kindly sponsored by Element Games)
Those of you who've attended my previous events will know that the raffle is where the real prizes are won but of course it's a tournament so there has to be something for winning. Please note the values below are dependent on a certain number of tickets sales and therefore may change. These will take the form of store credit with Element Games (the in-house hobby shop) who offer discounted GW products. The awards will not be given out in the same way as they would at a singles event (or even a normal doubles event) instead they'll be as follows:


There'll also be a painting competition with prizes for the following:


Each player will only be able to enter one category of the painting competition so they'll need to choose the one they feel they'll have the best shot at winning. With such a low point total for your Force, it's a great opportunity to really go to town on an existing army or even start a new one especially for the event!

Painting Showcase
Speaking of painting new models for the event. Last time I asked people to send me pictures of the miniatures they were painting for the event. I'd like to do this again so if you're coming along and painting stuff up then please send me plenty of pictures as you go along. I'll collate these into posts every week or so (depending on how many I receive) and hopefully we'll be able to encourage each other to make progress towards some beautiful new units or even full armies before the event. Use the contact me link on the right to send me pictures.

Changes from the previous DT event
The vast majority of the event format is staying the same. I'll be keeping the round times at 2.5 hours but I'm going to streamline the pre-game stuff and I've simplified the deployments so that games can start more quickly. Since we're playing the same missions in all three rounds it should be pretty straightforward to get your games underway.

The deployments are detailed on the DT2 page but it's Dawn of War in game one. Vanguard Strike in two and back to Dawn of War for three but with the twist that one player from each team deploys before the other two do (alternating of course).

I've also made some changes on my end of things to streamline the spreadsheet I use to collect up the scores. This should mean the event can run to time even if I'm playing along with you guys. Should also mean I get to chat you all a bit more at lunch time!

Summoning has been limited in that you can't break the "no unit may be taken more than twice" restriction i.e. if you start with two units of pink horrors, you couldn't summon a third. However, if you completely lost one of the two units you could summon a replacement for them.