Another 3 weeks where I've been almost completely AWOL. Sorry for that! I've been keeping pretty busy though with the garage conversion. Last time I posted we'd sorted all the walls with insulated plasterboard and the Velux window had been installed. Well I'd inadvertently set myself a deadline of Sunday 15th because I'd arrange a big X-wing game between Matt, Scott, Sam & I and we'd need a venue! With my old gaming room dismantled the new one needed to be ready. That meant a solid weekend of work getting the roof done and the gaps filled and then a week of evenings decorating: 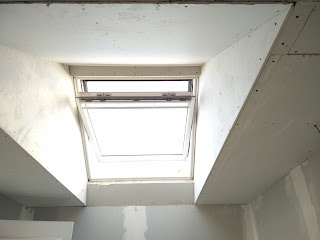 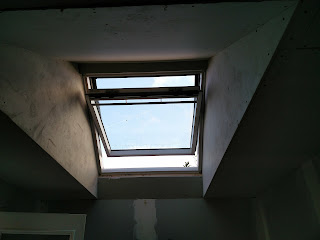 Difficult to get my phone to play but as you you can see, we successfully created the skylight. The whole ceiling was boarded out with 12 mm plasterboard before I donned a protective suit, goggles, mask and gloves and set off into the new loft space to install some insulation. Getting around in there wasn't much fun but it'll be worth it. 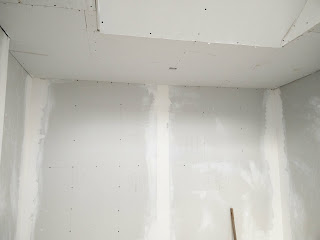 Now we could start working on all of the joins and screw holes with some filler. Once that had dried sufficiently I went at it with an orbit sander: 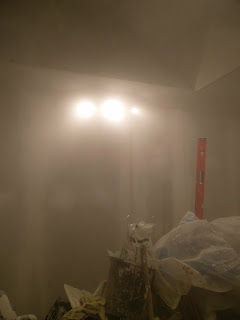 It was hard going because I kept having to stop to let the dust settle so I could even see what I was doing! Obviously I had a mask and goggles but still wasn't much fun again. You can just about make out the lights I've installed, two sets of three LED spots to light up the table and over toward the desk. The desk will have some daylight lamps too when I get round to sorting that. 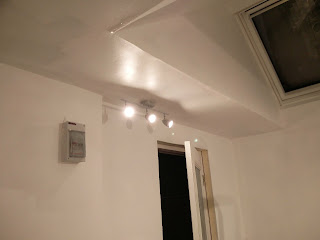 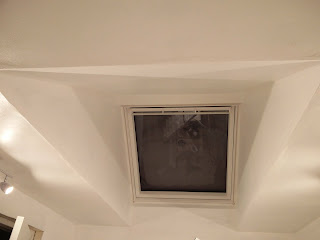 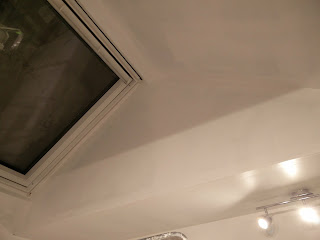 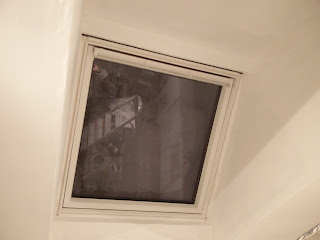 Once the dust had cleared (the next night), I set about giving the entire room a layer of Basecoat (see this is hobby after all!). This should hopefully make for a better finish. The filling isn't totally perfect but I don't really want to fork out for a plasterer on what is still essentially a shed! 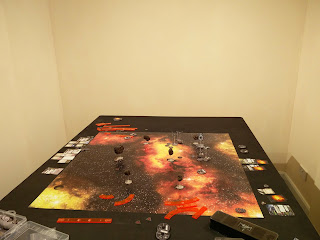 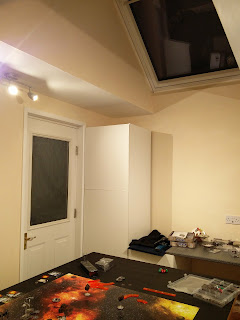 Finally, I threw some Ceramite Whi... ahem... Dulux Brilliant White at the ceiling and some cream colour on the walls. I'd toyed with different colours but figured it's a small room so plain, bright walls is the way to go to maximise the light.

My Dad came round for another session last Saturday which saw him assembling the units whilst I laid the carpet tiles. I originally planned on lino/Karndean but carpet tiles are significantly cheaper (I'd given up trawling gumtree/eBay of people selling off boxes of Karndean). They're also easy to fit. I still managed to make things look difficult mind you! With the carpet in we brought in the units but didn't have much time to do anything else. The good news is my old tabletop fits over the two units (fitted with castors) perfectly with a reasonable amount of space around it.

As you can see, we were able to play some X-wing in there on Sunday but I'll do a proper report of our epic game (my Tantive's first outing) in a separate post. I've since cleared everything away and covered all the furniture/carpet so I can put a second coat on the walls. I think the ceilings are passable but will check again in the natural light in the morning when I'll be painting the walls. I did manage to get the blind installed on the window though but I didn't have my phone on me so you'll have to wait for a picture of that.

Hopefully next time I post it'll be all but finished and I'll take plenty of pictures so you can see all the bits and pieces I've done. It'll take me a while to fully decamp into there though as I'm using it as a chance to sort through all my stuff and eBay what I don't need.

In other news, I've also made a start on my Blood Bowl Human team: 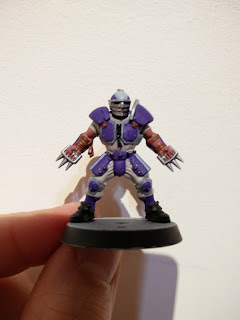 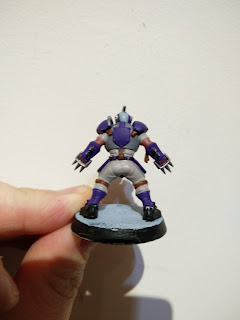 I'll post more about the team soon but at least I'm doing some painting. Incidentally, the base isn't going to be icy, it's just grey primer and I painted the rim black to tidy up a little. I've also invested in some new brushes from Rosemary & Co. so I'll let you know what I think of them. Seem pretty good so far. The garage will hopefully be done in the next couple of weeks so I can get some serious hobby progress made.
Posted by From The Fang at 00:28:00