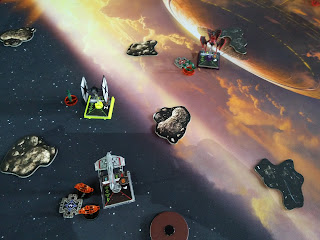 As I mentioned yesterday, I've been to the Saturday of Sanctuary's X-Wing Weekender events. This event required two 100pt squadrons. You had to use them at least once in each game and got to choose at the start of each round which list to use having seen your opponents' lists. This I struggled with right from the start because I don't know the game well enough to really understand what a list is capable of. Anyway, here are my two:

The eagle-eyed amongst you will notice this is slightly different to what I posted yesterday. I dropped C-3PO in favour of Sabine which gives me better bomb damage and an extra slot where the Ion Bombs go. I had to swap the Torps but I think it's a good trade. I wanted to use Miranda as a bomb and flee the scene kind of pilot so Torps are just a points filler anyway.

Game 1
Well, I failed completely here. We're playing in a doubles event at Sanctuary next Saturday which starts at 10 am. I'd got this time in my head so got to Sanctuary at 9.20 which I thought was nice and early. Sadly, the event started at 9 but since there were 11 players I'd just given myself the first round bye by default! Onto Game 2.

Game 2
This was my first competitive X-wing game in about 18 months and I've barely played casually in between so I was somewhat rusty. I chose to use Corran/Miranda against my opponent's Corran, Wes Janson & Sabine in a shuttle. Two PS8 pilots so I failed straight away when I decided to take the Initiative (having won the roll). That gave my opponent the chance to see what I'd done and boost away etc. Something I really should've been doing myself. Ah well. Lesson learned. 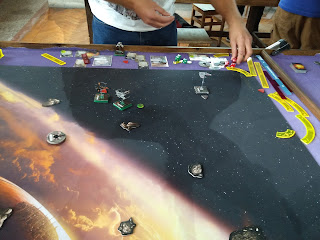 Miranda was the first to go down. Corran had done quite a nice double-tap on the Shuttle and taken it to a single hullpoint but leaving it alive meant it could do a nice block on Miranda and prevent her from SLAMing past Poe and dropping a Conner Net on him. With the benefit of hindsight I'm not sure the shuttle was actually at range two when he looked at my dial but I could be wrong and didn't know that at the time anyway. Sadly I wasn't taking photos at this point so we'll never know. Anyway, this left Miranda unable to do an action and hence stranded in front of his two X-wings having already taken some damage. I wished I still had 3PO at this point but nevermind.

With Miranda gone Corran had too much to do. He took down the shuttle but despite playing keep away for quite a while I could never get into a position where I felt safe to turn and shoot without losing him. I probably should've taken a gamble at some point but it was good practice at arc-dodging. Basically I ended up barrel rolling into trouble and paid for it. 100-29 loss. 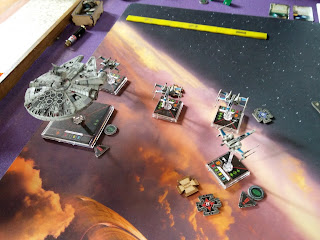 I didn't have to move tables at least. This time I deliberately chose Han and Poe to give me a go at using them. My opponent used three T-70s with Ello Asty, Blue Ace and Blue Novice all of which had Autothrusters which was frustrating (I'll come to that in the conclusion).

I played aggressively hoping to get behind him and take advantage of Han's turret and evasion. During the first salvo I managed to get Ello Asty down to a single hull but Han took some serious damage as I'd inadvertently put him at range 1 of two T-70s. In the next pass Poe did some decent damage on the Novice leaving him with two hull with help from Han. I just couldn't get into a position to finish off Asty though. Han ended up being in way too close and having been already damaged my opponent focused on him and with the help of a Direct Hit took him out over the next few rounds. 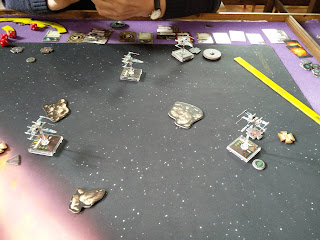 Poe now had A LOT to do on his own. However, in my favour was the fact that two of his ships could be fairly easily one-shotted if I could line them up. After taking some damage I was able to get a final blow on Ello Asty to improve his odds. Just as I was about to roll some dice my opponent rolled for his critical damage that he'd forgotten to repair and destroyed himself! 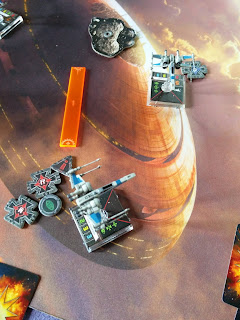 With time running down though I went for broke. I turned straight for him and tried to kill the Blue Ace. I'd have needed a Direct Hit but it was just about my only chance. I managed to get him into hull but I'd left myself exposed at the return Range 1 was enough to finish Poe off giving me a similar score to the last game, something like 100-37 I think.

Game 4
I'd come into the day hoping for at least one win. Technically I'd got one from the bye but I wanted to win properly. At least I'd killed ships in the first two games I played (OK so one took himself out but it counts as far as I'm concerned). I decided to go with Corran and Miranda because I really wanted to see what Miranda could do and have another go at arc dodging with Corran. I also felt that Miranda gave me the best chance against Whisper & Echo which were in one of the lists. He chose the other in the end anyway which was Maarek, Rexler and a TIE/fo with a Zeta pilot. He'd got tractors on both the defenders which I soon learned to fear! 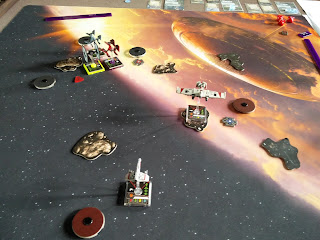 I again played too aggressively with Miranda and accidentally dropped her in range three of one of the defenders with a SLAM. I got tractor beamed onto an asteroid causing damage and then was shot again. I then was in range of the other two ships and was hit hard. I think I was into hull straight in round 1! He'd positioned me well so that I would still go over the asteroid and therefore miss an action. This left me right in front of all three of his ships who were shooting first thanks to Initiative and the Adaptability boost. Once again, I never got to drop a single bomb and wished for 3PO! 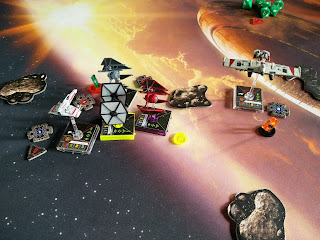 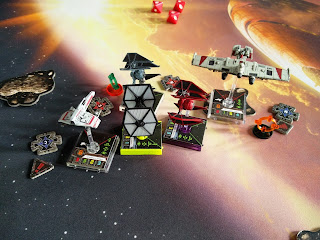 Meanwhile, Corran had managed to barrel roll his way into range one of Maarek Stele and a swift double tap scored 5 damage leaving him on a single hull. Corran was totally undamaged at this point which helped a ton. I then spent a LONG time managing to dodge most arcs or just taking single shield and repairing with R2. My opponent started to get pretty unlucky though. He killed off Maarek going over an asteroid and the Zeta pilot took two criticals over some debris. The double stress limited his ability to add damage to his rolls too. I managed to get Corran into a position where I could K-turn and finish off the TIE/fo meaning I'd swung it from a loss to a win. 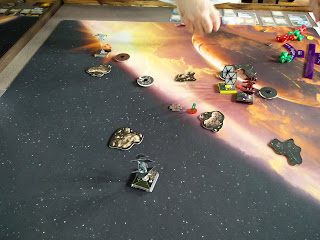 At this point I could've easily turned tail and ran to keep Corran alive and secure the win but with literally nothing to play for (or so I thought - there was a KitKat Chunky for last place!) I decided to see if I could finish off Rexler who'd lost two shields by this point. I barrel rolled into range one to see if I could double tap him down but he was behind an asteroid. That saved me nicely though as I rolled 3 evades on 4 dice to avoid the tractor beam and then three evades and a focus versus his shooting and spent a focus token to cancel all incoming damage. In response I couldn't quite finish him. I then had to try to get away going straight over the asteroid. I took some damage but he couldn't hurt me enough to destroy me and time was called giving me a 69-62 win (or something like that). 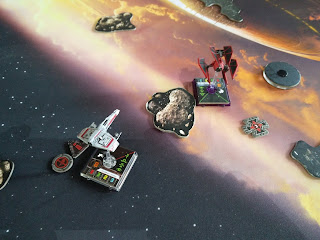 Conclusion
I finished 9th out of 11 which is hardly a stellar return to the X-wing tournament scene but I'm still pleased with the result. I learned a HUGE amount and was really proud of how I played Corran in the last round. I don't think I made many mistakes at all and was able to punish the ones my opponent made. He was certainly unlucky with the obstacles but I wasn't making him fly over them! I think he probably got too confidence when he killed Miranda so easily.

I really enjoyed using both Poe and Corran. In fact I'm going to try and come up with a list featuring both of them. There's something awesome about arc dodging that I find really addictive. I really need to get myself some Autothrusters though as they'd have definitely kept Poe alive much longer in my second game. I just don't want to start buying Scum ships (although I'm sure Matt would love it if I did).

Miranda is really frustrating. I know I used her totally incorrectly by getting her into the thick of it too soon but I think having the bombs on there makes you too tempted to do that. I should probably have been more patient and dropped some Conner Nets to hopefully lure my opponents into. I do think C-3PO would be better in this situation too. I've had some great fun with Miranda in casual games but I think she'll spend a good while on the shelf when I attend tournaments.

Ultimately, if I'm going to get better at this game I need to play A LOT more but if I can persuade Matt and/or Scott to play from time to time and attend more events I could see myself getting totally hooked. It's still refreshing compared to 40K. It's interesting how many people there had given up on 40K tournaments completely and were just playing X-wing. I can totally see why too. Outside of the events I run, I find it difficult to motivate myself to attend any more 40K events. It was nice to see some faces who I've met through 40K. Darren and Andy have been totally hooked on X-wing recently and their enthusiasm was infectious.
Posted by From The Fang at 19:02:00