Rest assured I'm still alive even though it's been a fortnight since my last post. I've actually managed to get a couple of games in recently as some warm up for Fluffageddon. Unfortunately, for various reasons I'm not going to be able to make Hero for a Day in a couple of weeks but you should read about in on Nick's blog and go along if you can. I think there's some tickets left.

Anyway, onto the subject of the post. I've been meaning to make a set of these for a long time so when my Mum bought some LED tealights but decided they were too orange I seized my opportunity. I also discovered that my Dad had a hot glue gun in the back of a cupboard in his garage to I was quids in. I won't go into great detail of the process since it's hardly an original technique but here's a brief outline: 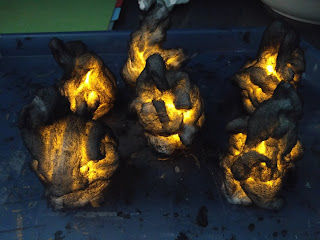 1. Take some LED tealights like these. Some videos I've seen remove the "flame" so I tried both and ultimately decided it's better (and less faff) to leave it on.
2. Unravel some cotton wool balls and tease out to give more volume. I think I used about 3 per marker
3. Apply plenty of glue with a hot glue gun.
4. Stick cotton wool on in a random fashion to completely conceal the tealight
5. Give a generous coating of hairspray (again free if you're pinching from the missus) and allow to dry. This helps the cotton wool hold its shape during spraying.
6. Spray liberally with your favourite black spray paint (I used Army Painter)
7. Apply a second coat of black spray to the tips if you think it's necessary (I didn't bother).

The final result is really satisfying especially considering it took my all of half an hour to make them. There's really no excuse not to. If you're worried that they get a bit pricey if you're buying a glue gun etc then rest assured that you'll find plenty of other uses for it in your hobby activities. I find stuff falls off bases with just PVA so I'm going to be using the glue gun instead.

I'll hopefully be back later in the week with a progress update on something else I'm working on. I'm currently trawling eBay for some Ork and Space Wolf stuff to bolster my forces. I've also got a new attitude to painting that I'll cover soon.
Posted by From The Fang at 17:26:00