Your Armies for Double Trouble (Part 6)

Yet another update in this series. I hope you're enjoying seeing a preview of the armies that'll be facing of against you (or even with you!) at Double Trouble. It's certainly going to be a colourful affair if nothing else as tonight's post proves. Not a lot of pictures tonight but some great armies nonetheless.

Let's start with Luke Fogg's Howling Griffons. It seems he's decided to go with them over some of the other army options he had available to him. I've always thought the colour scheme was striking so I'm pleased to see it. Those of you who read his blog Darksun Life will know that he's including some of the first miniatures he ever painted which is why there are some random Ultramarines in there! 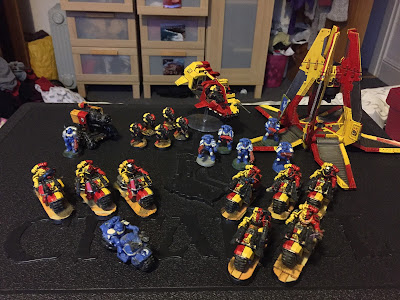 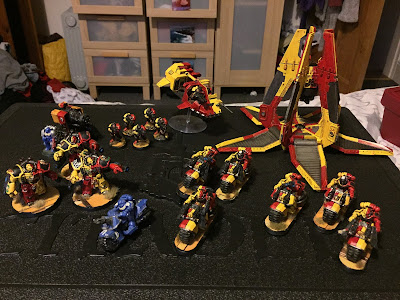 Next up we have a single shot from Chris Buckle. He's the first one to get in touch with a Horus Heresy army list. Forge World has been included at DT which is the first time for a long time that I've permitted the use of FW stuff at one of my events. I'm hoping I don't live to regret it but I'm certainly looking forward to seeing some of the FW miniatures in action: 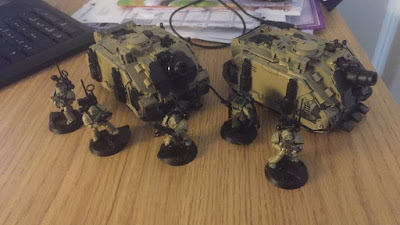 Chris seems to think three weeks is plenty of time to get these guys finished! We'll have to see how he gets on in the coming weeks.

Finally tonight there's another update from Matt Calow's 3D printed awesomeness. Check out this custom siege shield for one of his Vindicators:

More 3D printed goodness for my DT army :P Because ramming the enemy (even rubble can be a heretic) should be an act of devotion! 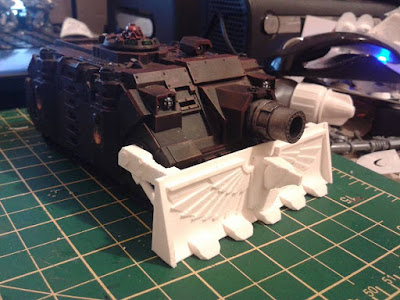 That's everything I've got for now. There are still a good chunk of armies that we haven't seen yet so I'd love it if more of you send some pictures my way. In the meantime I'm going to try not to blog for a few days so that I can make a decent attempt to at least get my DE to three colours. I've abandoned all hope of getting them finished! I will of course still reply to emails and post if anything major changes.
Posted by From The Fang at 17:00:00