Tweaking the Rules for Double Trouble 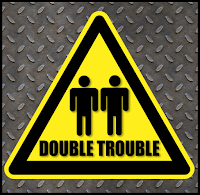 Following on from the playtesting we did at Warhammer World, I wanted to tweak a few things before the event. Let me start by saying there's nothing here that should drastically affect your army selection but will hopefully make the event run more smoothly and generally be more fun. I've updated the DT page to reflect these changes but wanted to highlight them here and explain my reasoning.

Objectives
The objectives will be the first thing I cover today. As you know from the rules pack, Double Trouble will feature a set of custom Maelstrom objectives that will be in play in every game. They'll form one half of a double mission (it is doubles after all) with the other half being to wipe out the enemy army. I think it'll make for some interesting debates on strategy within the doubles partnerships.

Anyway, I've tweaked the wording of some of the missions as follows. Remember Force refers to your 750pt portion of the 1500pt Army:

Let me know if the font is too small. I'll email everyone a PDF of the cards so they can print a set for last minute practice games if they want. There'll be two laminated decks on each table on the day though so don't worry about bringing any with you.

Most of the changes are simply wording to clarify some things. The main thing being that the "stretch goals" are clearer in how many points you score. You'll notice that 21-26 are now different. This came from the excellent review of the objectives that, Blog Wars veteran, Nick Thrower posted over on The Burning Eye. Instead of being the same as 11-16, you now get a total of 3 VPs if you can control the same objective for two of your turns in a row. I really like this idea as it creates an interesting gamble. Score an easy VP or risk it for 3. Of course, the cards are visible to your opponents so they're going to do their best to stop you getting it again next turn but there'll be times when it'll pay off.

Bear in mind it doesn't have to be the same unit. You could hold an objective with a unit at the end of your turn only for it to be killed off in your opponents' turn. As long as another unit of yours clears the objective (or uses Objective Secured - hint hint) and controls it at the end of your next turn you'll still get 3 VPs.

I've renamed these missions to try to make it clear which you've picked up but it's your own fault if you misread it and play for mission 11 when you drew 21.

Otherwise the cards have stayed the same, the only exception being Pile On! which now gives you a VP for simply fighting in the same combat with units from both Forces and a bonus VP if you side wins the combat in that particular turn.

Missions and Scoring
The scores for Annihilation and Tactical Superiority (i.e. VPs and Blood Points) will be recorded separately in each round and will be the same for both players in each doubles pair. At the end of the event the individual player with the highest score for Annhilation will take one prize and the player with the highest score for Tactical Superiority will take the other. There are no prizes for best doubles team but working with your partners in each round will be crucial to winning either prize.

For simplicity, I'm removing the cap of 30 VPs in each round for Tactical Superiority (this isn't likely to be a problem in most games anyway). I'm also going to keep the Blood Points as an absolute number i.e. 1BP per 1pt destroyed so 1,500 maximum points per round. Note that tabling won't give any extra bonus and VP scoring will stop immediately.

I'd toyed with the idea of making deployment the same in each mission (i.e. Dawn of War for all of them) but I think the varying deployment types make things more interesting and minimise the likelihood of a particular army thriving. For the last mission, units will fall back to the nearest long board edge.

Remember that there are NO SECONDARY OBJECTIVES so you don't have to worry about Linebreaker, First Blood or Slay the Warlord.

Death From the Skies
The new flyers supplement will not be used. Flyers will retain the rules/points they had before the new book was released. There will be no Dogfight Phase at Double Trouble. I don't think it's fair to expect everyone to be familiar with the new book, much less make everyone buy a copy!

Sharing Rules between Forces
Hopefully you're all aware that the allies chart will not be used at Double Trouble and as such all armies are considered Battle Brothers to each other. Here's the excerpt from the rulebook: 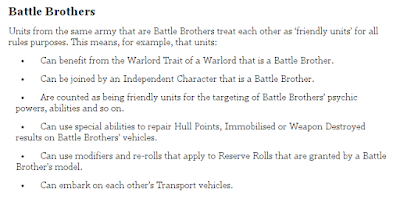 I'm aware that this will totally mess up some of the fluff but just go with it! I've had questions about how particular rules will interact with this. The answer is it depends on how the individual rules are worded. For example Target Acquired from Tau Markerlights says "Immediately before a unit from Codex: Tau Empire shoots at a target.....". That means that if both Forces happen to be Tau they can benefit from marker hits from either half. If you happen to have two Skitarii Forces only one set of Doctrina Imperatives may be chosen for the entire Army to benefit from. In an Army of two Astra Militarum Forces, units can give Orders to units from either Force. You get the picture.

Rules which have lasting effects will work for both Forces if the wording of the rule permits it. For example, Skitarii Luminagen causes a -1 to cover saves for a unit for the phase so whichever unit shoots it next in that phase will still get the benefit.

If there's anything else you're unsure of then please get in touch before the event so I can clarify.

As listed in the rules for Battle Brothers, units from both Forces count as "friendly units" to each other. Likewise, units from your opponents' Army count as "enemy units".

New Draft FAQs from GW
I've had a few of you ask me now about the FAQs that GW have been publishing on Facebook. As far as I know they're just drafts at the moment and we don't have a final version. I think it's pretty unlikely that they'll put up a proper FAQ document before the event but it's probably best that we ignore it. If there are any specific issues that you want me to rule on then let me know.

Conclusion
Right, I'm getting tired so I think I best call it a night. I'm pretty sure I've covered everything I wanted to but I rely on you guys to comment or email with anything you think I've missed. I keep saying it but it really helps if that happens before the event so we're not debating things too much on the day.