It's been a funny old year for our game (again). By half way through the year we'd already had NINE new codices which meant 14 new books within the space of a year! The notable releases here were Skitarii and Cult Mechanicus which finally brought Ad Mech to the table top. I'm still sorely tempted to buy an Ad Mech army but as you'll read shortly I can't see that happening soon. We were also treated to a Harlequins book but with fairly limited options for using them I quickly abandoned my plans for a force to complement my Dark Eldar.

The other big deal was the introduction of a new style of army composition which started with the Necron Decurion. This has probably been my biggest complaint about the new books in that it feels like a shopping list rather than an army. It's a great way for GW to get you to buy some models you wouldn't have bothered with in exchange for some (in places) stupidly good rules. I wonder how many tomb blades they sold before compared with after the new book! Some of the other books had only been out for a year or two before being replaced and, whilst I don't want to go back to the 5 year wait, the Tau release felt particularly lazy. 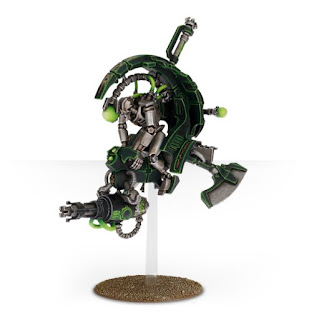 The Necron codex was also the first in a line of books that didn't fit in with the reasonably balanced first round of 7th edition codices. Whilst the Orks, BA, SW, GK and DE books upset people with the loss of some special characters and general simplification, they did all feel reasonably balanced against each other (OK maybe DE didn't). We were all hoping that the Necron book would lose some of the nonsense such as Mindshackle Scarabs and Tesla snap shots. When we heard that these were being "fixed" I was optimistic. That was until the rules for RP surfaced amongst other things. Since then we've returned the power creep days with Eldar Wraithknights becoming gargantuan creatures etc. It's a shame that these things overshadow some of the more innovative rules GW have produced this year. The Ad Mech and Harlequins books had some great ideas in them for example. I can't help but feel like they're rushing things right now.

I said last year that I was optimistic that the game would become more balanced but with an ever increasing number of formations it's anything but. Not only that but it's an incredibly complicated system now. I can't help but wonder if that's GW's plan so that we're all begging them to simplify things like they did with Fantasy? I'm not for a second saying I want that but a happy medium would be nice.

Games Workshop continues to produce the best miniatures in the world, there's no question about that. I just wish they'd embrace the community a bit more and understand that we want a playable game in which to use those miniatures. Their lack of support of the third party tournament scene and third party suppliers continues to baffle me.

Why do GW have their own stores any more? They don't need to worry too much about the competition at the moment so why not cut their overheads and leave the independent retailers to sell their models. In my experience they do a better job of promoting the hobby anyway without coming across as pushy or weirdly over-friendly. I get that they don't like to have their products side by side with other stuff but this doesn't worry other manufacturers so why GW who, like I've said, make some of the nicest models anyway!

It may just be my perception but the tournament scene seems to be dwindling right now. A lot of the regular events have disappeared from the calendar and whilst I was getting record numbers (for me) at Blog Wars, I wonder if that's because there isn't much choice right now. A lot of people I've been speaking to have been put off by GW's Warhammer World events by the use of Unbound or crazy systems like Throne of Skulls uses. Why not support the independent events like FFG do with X-wing?

The trouble is, when all is said and done, I'm not going to be stopping collecting GW models or playing 40K any time soon. I love the deep background and no other games have the same scale to them. Nothing else grabs my attention like 40K does. I flirt with X-wing but I just don't feel the same immersion that I do with 40K, as dodgy as it is right now. It's basically an abusive relationship GW have created and we keep making excuses for them. Thing is, I don't want GW to fail as a company like others do. I'm not a GW hater. I'm just a frustrated fan.

Anyway, ramble/rant over. It's now time to look back at the my own personal experience of 2015 and make some plans to get my arse into gear in 2016 and tackle this mountain of unpainted models.
Posted by From The Fang at 15:40:00