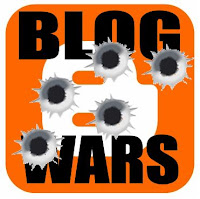 Sorry, I intended this post to appear a lot sooner but I've been away for the weekend and my little boy has come back poorly so I've had other priorities recently. I want to draw all the feedback together tonight and then at the weekend I'll make the announcement of the new tournaments for 2016 so come back for that. I firmly believe that the key thing for Blog Wars was that I wasn't content to keep the format identical every time and I hope you guys felt that I responded to feedback and the event improved because of it. For that reason, let's tie everything together and look at what I should be thinking about for the new events.

Atmosphere and Format
It seems that for a lot of people this is the main reason to attend Blog Wars. That makes me really happy because that was the aim in the first place. I think it's been a lot easier than I thought to get a friendly atmosphere whilst still having a competition. It wasn't an instant thing but I believe that certainly in the last couple of BW I got it about right. There weren't many OTT lists and generally people enjoyed all three games outside of the odd unavoidable total mismatch.

When I've posed the question about full weekend events before it's always received a mixed response and it seems that's still the case. I'm not sure people would be prepared to commit to a full weekend for a casual event. I'm not sure I would for that matter! I think I'll be sticking to single day for now. There seems to be interest in something other than singles event though so we'll see what can be done for that.

Venue
As I've said before there are things I love about the NWGC. The location is reasonably convenient for most people. If two guys managed to get there from Germany the rest of you don't have an excuse! It's near to a train station and with a decent hotel (by all accounts) nearby it seems like a good fit. Darran the owner is a great guy to work with and couldn't be more helpful. Table service seems like a big plus for you all too!

That said, I agree with you that there are things that can be improved. The toilets aren't the best but I think that's reasonably easy to rectify. The venue used to be freezing in Winter and roasting in Summer but it seems to be better on both counts this year. I do think it needs a bit of TLC though. The tables are pretty good though and they've certainly put together a lot of scenery recently giving some really varied tables. I don't think there were many scenery complaints this time.

Subway seems to go down a treat so for the time being at least I'll be sticking with that for lunch unless I hear any strong objections. I think cold food is easier as then you aren't risking anyone getting there late and not enjoying it and Subway are pretty good at catering for dietary requirements which is a big plus I reckon.

I'll see what I can do about getting Element to stay open right until the end. I really can't promise anything on that front but I really think it's a missed opportunity for them. Perhaps they used to do it at events and found it wasn't worth their while. Can't hurt to ask though eh?

Missions
I think generally speaking people find them to be a good test for their army. There are comments that they favour faster armies but I think that's true of 40K in general at the moment. Obviously there are missions that people enjoy more than others but I think the overall consensus is that people like that the missions aren't too dissimilar from the rulebook ones but different enough to fix some of the problems. That was the aim all along so I'm pleased people think I'm on the right track at least.

I'll be talking more about it when I reveal the new events but I will be producing a new Maelstrom deck for one of them (despite how little fun it was cutting 300 cards out last time!). I think the objectives should have more emphasis so I'll be looking at ways of achieving that.

Scoring
I think the new system worked pretty well. Looking through the results I don't see any glaring problems where people are woefully misplaced having done better or worse than it seems. Doesn't seem like any of you guys felt that either so let's stick to that system or something similar going forward.

I'm still a big fan of having all three rounds worth the same number of points (and it seems you lot are too) so I'd like to try and work that into the scenarios for the new events. Not getting maximum points for tabling is definitely staying too!

Points Limit and Timing
I think most people were managing to get at least a decent chunk of their games done in the time but I think it'd be sensible to drop the points limit to 1,750 or thereabouts to help keep things to time. If I'm ditching the special character comp I don't think it's a problem to reduce the points. Hopefully it'll make for more sociable games where people don't feel rushed.

There wasn't a huge surge of interest in smaller skirmish games. I'm not sure it's something that 40K lends itself to particularly well. I think it's best at 1500+ and anything below that becomes a bit samey. For next year at least, I don't think I'll bother with a skirmish event.

Painting Competition
The new format seems to have been favourably received. I think only allowing entry into one category is a good thing. It means you have a target to work towards and you aren't totally demoralised when someone scoops all the prizes.

There have been several comments about the timing of the judging. To my mind I don't think people actually were voting before all of the armies were out on display but obviously people felt that this was happening. Maybe I could set up something so people enter there votes straight onto a laptop. That way I don't have to spend time typing everything in and I could only give people access to vote once everyone had displayed their armies. I think I'd need to tweak the schedule to accommodate this but it should be doable.

Prizes
Finally, everyone love the raffle but that is a no-brainer. Who doesn't like getting free stuff just for showing up? This will be something that definitely won't change in the new events and I want to look into more ways I can expand the prize support even further! I think the door prizes were well received and I'd like to find a way to keep that up. The tournament prize system works, in my opinion at least, in that it doesn't make people desperate to win at all costs but still rewards the winner. I'll be keeping things pretty similar on that score in the coming year.

Right, come back (hopefully) tomorrow when I'll be posting the details for the June event and shortly after that the November one. I'm hoping that both will appeal to the majority of you and that you'll give them the same support Blog Wars has received over the years.
Posted by From The Fang at 17:00:00