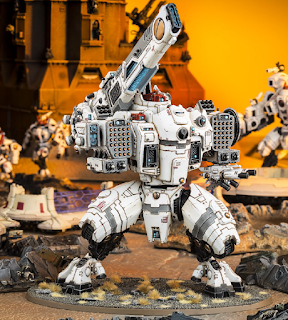 I'll get to posting more about Double Trouble soon I promise. In the meantime I'm very busy building models up for my games against Matt next Monday. We're having a couple of games of 40K at Warhammer World followed by some Betrayal at Calth back at Matt's house. I've just finished building up all of the Calth models and I'm frustrated that I haven't gotten any paint on them yet. Hopefully I'll get chance to at least make them red and blue this weekend. Anyway, for the 40K games I'm going to be using my Tau so I've decided it's a great opportunity to field my brand new Stormsurge that was a gift from the Blog Wars players (thanks again guys).

I've built up all of the sub-assemblies and I'm currently trying to decide if I just got with the standard pose or clip off those pegs and create my own pose on a scenic base. It'll probably be the latter but that relies on me getting the time! The other problem I'm having though is trying to decide whether or not to magnetise the main gun. Obviously doing so would give me the option of either weapon but I find magnetising a pain in the arse and I'm sure I'll end up using the same gun every time. For example, I was going to magnetise the Riptide's main gun but haven't once thought about using the heavy burst cannon. Incidentally, I'm definitely paying the 5 pts to upgrade the flamer to an AFP. The flamer would see so little use and the AFP has the same profile but with better range and Barrage.

So then, which main gun should I go for? Well it's important to note that the pulse blastcannon (PBC) is 15 pts extra compared to the stock pulse driver cannon (PDC) which isn't an insignificant number of points on an already expensive model. Spending more points would make you think that you're getting a better gun though right? Well let's compare the two:


First off, it's a nice touch for GW to specify that if it isn't clear what range you're in then the Tau player gets final say. I think the PBC is a great weapon, any S10 Ordnance weapon is going to pretty reliably hurt vehicles. The problem is that with AP2 and just one shot (when not anchored) you're only destroying the vehicle a third of the time. Of course, being a large blast there's a chance to hit two or even three vehicles but that's very situational. The other advantage of the large blast is that clustered troops of any kind will feel the pain, especially things like TWC thanks to S10. A great weapon like I say but the lack of AP1 and the single shot is a factor. 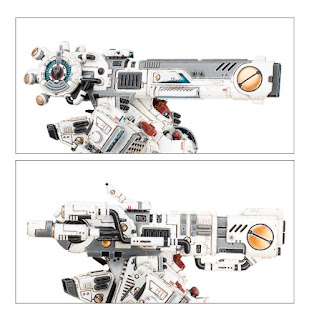 The PDC on the other hand has less than half the maximum range of the PBC but brings the D if your target is within 10". That might not sound much but remember the suit can move 12" making that an effective 22" range with is a big ol' chunk of the board. If you can get some marker support for better BS then two shots should be enough to take down most vehicles including IKs if they're unlucky with their shield rolls. The other modes are reasonably useful, even S9 AP5 isn't bad since it can double out most troops and deny FNP even if they do get their regular saves.

So, there are a few factors to consider more closely I think:
Conclusion
I started writing this post with the intention of picking between the two main guns but it's ended up being more of a discussion about the role of the Stormsurge on the battlefield. That's a sensible question to ask though. If you're intending to use it as a midfield bullet magnet whilst the rest of your mobile force advances then strap on a shield generator and take the PDC. If it's part of a gunline then the PBC is probably the way to go. I'm still torn but I'm definitely leaning towards the PDC. Having a potential for 8 D shots in a turn is pretty exciting to me. That could decimate a good chunk of the opposition in a single shooting phase. The shorter range fits in well with my preferred mobile Tau army too.

Screw it, I'll build it as a PDC to avoid the magnets and perhaps I'll just buy a second gun on eBay or from a bits store. Worst case I really hate the PDC and rip it apart to make the PBC. Maybe I'll use the glue sparingly in case!

What do you guys reckon though? What have you put on yours? Has anyone playtested them to know for certain?
Posted by From The Fang at 19:39:00