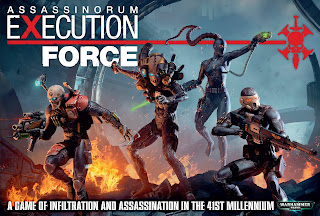 First off, I'm not the first person to review this game. There are already excellent reviews posted on Index Astartes and Tale of Painters (who include detailed unboxing shots). Anyway here's my take:

My friend Matt and I decided to spend Star Wars Day (May the 4th) gaming. After a bloody 40K battle between Space Wolves and Eldar we broke open Matt's brand new copy of Assassinorum: Execution Force. I'm sure you all know this by now but Execution Force is the new standalone game from Games Workshop. GW have had a turbulent relationship with their standalone games. Everyone knows Space Hulk is a huge success (and a brilliant game to boot) but Dreadfleet wasn't particularly well received by the gaming community.

To me at least, the reasons for this are clear. Both games feature some beautifully detailed exclusive miniatures but Dreadfleet's can't be used in any other game. Personally I like Dreadfleet as a change of pace from 40K every so often and as a way of introducing non-gamers to the fold. There's another problem with Dreadfleet though, the Fate deck. Having your game ruined by a crazy twist of "fate" is frustrating. Let's see if Execution Force has the same issues. 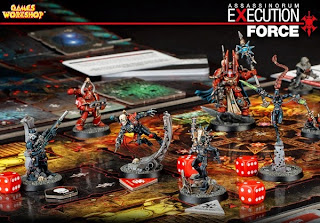 Well clearly GW have no issues with transferable models with EF. The cultists, CSM and Sorcerer Lord are taken straight from other kits and are supplied with the conventional 40K bases. It does feel a little bit lazy (when you consider Space Hulk retails for a similar price and we get unique sculpts), but the selling point is the four stunning new assassin models. They're a great revision of the previous sculpts which are showing their age now. It does still seem a lot to pay for the models but when you consider GW will probably sell the assassins separately for £15 each (at least), the four of them plus the Chaos miniatures for £75 doesn't look as bad.

For the hobbyist there's plenty to be going on with on the painting front but without it feeling like a mammoth task. I'd like to get a set painted up myself amongst my many other projects! Anyway, once painted the whole game will look gorgeous.

It's a clever move by GW to package up the new assassin models in this manner. I'm sure if they'd been released individually they'd have still sold but by putting that bit more effort in they'll probably shift a big chunk with EF and still be able to release the separate kits at a later date. Well, that's assuming they have some sense and don't make them a limited edition thing (which the game itself is for some stupid reason). Even so, I'm happy to have a new game to play and I'm sure assassins fans will love the new sculpts. 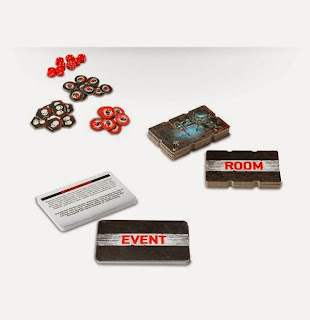 The board is beautifully detailed and owners of Space Hulk will be pleased to see the same sturdy looking laminated card used here. Minor niggle here, but it's a bit of a shame they didn't make the three pieces clip together to make the whole thing stay in place. I'm really nit-picking here but it did bother me a little.

The cards and tokens are cut from the same thick card and again feel durable. There's effectively a fate deck in the form of the Event cards but I'll get to them in the Rules bit of this review. Each assassin gets a stat card detailing all their relevant rules and the "renegades" forces get a card for each unit type. This is a nice touch and saves flicking back through the rule book constantly. Tokens are also provided to keep track of everything which I'm always a big fan of. Finally, there's the "room deck" which makes use of a really well thought out mechanic for making each and every game different. When the assassins reveal a previously unscouted room you draw it from the room deck and place the relevant renegades inside. I'll cover this more in the rules but it's a great idea. 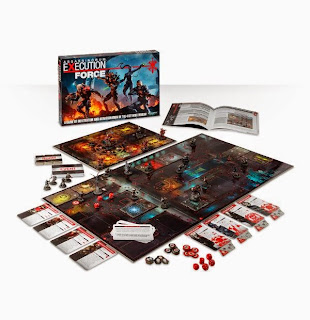 The most important thing to point out is that this is a co-operative game. I say this is important because if you aren't a fan of that kind of gameplay then this game isn't for you. For us though it's a refreshing change from the competitiveness we both exhibit when playing any other game. I love a good co-operative video game and it's nice to play a board game with the same ideas. I'm not pretending this is revolutionary or anything, I'm sure it's been done plenty of times but it's the first co-op board game I've played at least. Potentially you can play with up to 4 players each controlling an assassin each but I actually think 2 would be the maximum without it feeling like you were twiddling your thumbs a lot. If you did want 4 people involved it could be quite fun to play two games simultaneously and compete to see who can finish first (see, I can't help but make it competitive!).

Generally speaking the rules are excellent and feel really well thought out from first impressions at least. There weren't many times we needed to consult the rulebook and when we did we found answers pretty much every time. It's good that there aren't tons of rules, as this will make it more accessible to non-gamers and there's less to forget between games!

The basic mechanic is simple. The Sorcerer Lord is trying to enact some Chaos ritual (I didn't have time to read the fluff) and the assassins must try to kill him before he completes it. They have just 16 turns to do this (which doesn't feel like a lot). The only way into the temple is by teleporting in. To do this the assassins must scout out all the rooms and find both the teleportarium (good word!) and the control room. All the time they're doing this they must avoid Chaos patrols and each time they reveal a room more cultists are discovered. As sneaky as those assassins are they're still going to end up alerting patrols to their presence.

With that clock ticking away they need to move quickly but the faster they go the more difficult their task will become. Act too slowly though and the ritual will be completed ending the game. It's nice to have a definite end point and that pressure to do things quickly whilst being as stealthy as possible. Alert too many patrols and they're likely to receive more reinforcements or otherwise make things more difficult for the assassins.

It's hard to explain without playing the game but there's a genuine feeling of time pressure and a desire to complete the game whilst alerting the minimum number of renegades possible. Incidentally, for replayability GW have added in some "achievements" which up the difficulty and provide a challenge to keep you coming back. Not forever, but at least they're considered it. You could easily come up with your own challenges too.

Our Game (definite spoilers)
Sadly, with it being out first run through we weren't the quickest so we only got chance to have one run through. It was quite simply epic though. We sent the Calidus and Eversor assassins up the middle quickly to try and scout ahead whilst the slower Culexus and Vindicare would examine the closer rooms. We revealed the Teleportarium with just two rooms to spare. This meant there was a 50:50 chance the control room would be in a room near to our assassins or, if not, we'd need to send one back to the start to go into the only remaining unrevealed room. Sure enough what we feared happened and we were forced to send the Vindicare all the way back to the control room.

The event deck worked brilliantly with the events we revealed really feeling like they were building to a crescendo and adding to the tension. We had the other assassins poised ready to enter the teleportarium and the vindicare kept being delayed by the forces of the ritual preventing him from sprinting and shooting in successive turns. With the clock counting down he finally got to the control room and sent the other three assassins into the Temple of Shadows where three CSM and the Lord waited. The ritual continued to progress and it was only thanks to the presence of the Culexus that the Lord wasn't only woundable on a 7! On the 15th assassin turn we managed to wound the Lord once. In the final turn the Culexus took another wound and it was up to the Callidus to finish the job. She failed to hit but re-rolled thanks to the poisoned blades and killed the Lord with moments to spare. We still had the option of blowing up the Eversor so it wasn't quite our last roll of the dice but suffice to say we wanted to avoid it.

We were pleased to have finished the mission on the first play through and not only that but with all four assassins remaining alive. Perhaps we'd played a bit more cautiously than we could have by trying to keep alerts to a minimum but this made things even more tense towards the end. Perhaps it was just luck of the draw but the Event deck played out brilliantly with CSM only arriving in the first area towards the end. I can see potential for the Event deck to ruin the game, if we'd not had the Culexus with us then the Event card in the final turn would've made the Lord near invulnerable. I suppose that works though as a means to encourage you to use all of the assassins together and play to their individual strengths. Not just that but also to make you keep alerts to a minimum to reduce the risk of Events making things harder.

Conclusion
The co-operative side of the game really sets it apart from other GW offerings. Matt and I always enjoy playing 40K doubles together and being able to recreate that feeling of teamwork is excellent. I also like the idea of being able to play the game solo (sad I know) as an alternative to video games! The new assassin models are beautiful and I'm sure we'll see plenty of Execution Force games showing up on eBay minus the models (if they aren't there already).

You don't get tons for your money, there's no escaping that, but what you do get is well thought out which isn't something you can often say about a GW product. There's some innovative thinking here and there's no reason for the game to play out the same way twice. I'd urge those who might be put off by the reprint models to try to ignore it and give it a go. For once it's more about the gameplay than the models, again not something you can often say.

It's difficult to come to proper conclusions after just one game but I'm already looking forward to playing it again and it's persuaded me to buy my own copy. I'm not thrilled to have more models to add to the ever increasing pile of unpainted stuff but I'm prepared to make an exception. Perhaps that says it all. I'd recommend this game to anyone, even those who don't play 40K.
Posted by From The Fang at 21:54:00