I'd originally intended to post this up on Sunday evening but thanks to spending more time painting my house than my Orks for Blog Wars (more on that later) I've not had the chance. I actually made the pies on Sunday but they've been cooling on the window ledge since then.

I've now had every list in and checked them all. Thank you to everyone for submitting promptly. I want to say at this point that suggesting Battlescribe as a means of submission made things infinitely quicker than usual, something I was grateful of given there were 49 lists to look through from a wide range of source material. I think in future I might make Battlescribe format compulsory. I know it's a bit fiddly to use but it really makes a difference to my life!

The Pie Charts
As ever you can refresh your memory of previous crusty offerings from BW5, BW6, BW7 & BW8, Last time out was the first offering from 7th edition and sweet Jeebus there's been a lot of releases from GW in that time frame. If you include Cult Mechanicus (which isn't in play at BW9) there's been a whopping EIGHT books released since Blog Wars 8. That's ridiculous! There's never been more choice of source material for people to select from and with multiple detachments there's a near infinite variety of combinations. Anyway, looking back at BW8 we can see that over half of the armies came from three books (namely Eldar, Necrons and Space Wolves). 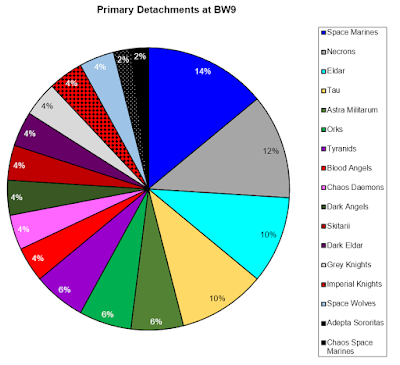 This time around Necrons and Eldar are still popular but Space Wolves have massively dropped in popularity with just 2 of the 50 players using them. Space Marines have made a big return to be the most popular choice. The big news is that whereas at BW8 there were 10 different factions for Primary, there are now 17 different factions represented including the new Skitarii. Correct me if I'm wrong but this is also the first time Sisters/Adepta Sororitas will be represented and I'm very pleased that there'll be another two Ork lists on top of mine. Indeed, when we factor in the second detachments there's every single book represented barring Khorne Daemonkin and Harlequins. Of course, there are some Khorne daemons around in the Daemon lists though.

What this means for those of you attending is that you'd have to be pretty unlucky to face the same faction twice. Not saying it won't happen but with a field of 50 and such a variety in the lists there's only a very small chance. As you can see, there are bang on 50% of the lists that are only taking a single detachment. I find that quite surprising really but perhaps there are more people out there who prefer to keep it simple like me. It isn't difficult to spot that there's a big chunk of Imperial Knights. Of course, this is the first time I've allowed them in full force and I'm pleased to see that no-one has gone with more than 3 in a list (5 being the maximum at 1,850). We'll have to see how much it affects things and what the feedback is after the event before I can make a call on their presence at BW10. Otherwise there's again a big variety in the second detachments with little gems like the Inquisition and Assassins popping up.

Finally for the pies let's look at the Imperium vs. Xenos, although this time I've split Chaos off as a separate slice: 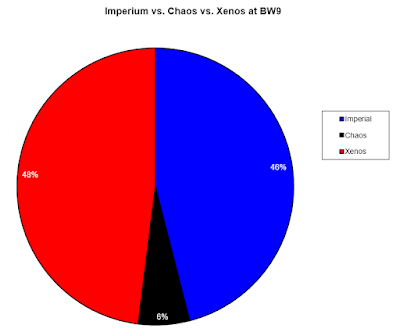 It's a near 50:50 split this time compared to BW8 where Xenos represented two thirds of the lists. When you look at it though there are a bewildering array of "Armies of the Imperium" now with Ad Mech being added.

Special Characters
As ever this is the crucial bit for Blog Wars as it's the thing that separates it from other tournaments. It's getting harder to enforce the rule though with SCs being deleted from books and newer armies not having access to any. My concern is that GW will move away from SCs as they try to move away from Finecast. Anyway, there are only 4 armies which have opted to be exempt from the SC rule (due to no options). Elsewhere there are clear favourites with Farsight featuring in 4 of the 5 Tau lists and Kor'Sarro Khan featuring heavily (hint: expect bikes-a-plenty). Nemesor Zahndrekh proves popular as well.

I've decided for next time to have a look through all of the characters that have been used at previous events and try to compile a list of the unsung heroes. I'll then offer some kind of incentive to field them to see if we can manage to have all of the SCs on that list represented at least once in the Blog Wars events. I don't think we're far off achieving that already frankly!

Attendance
Following on from last time around I thought I'd mention attendance again. Clearly selling 50 tickets is an all-time record for me and I'm flattered by the support. Let's look at the graph: 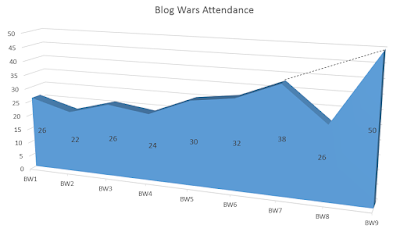 This is interesting because if we continue on the same gradient from BW6 to BW7 we arrive to the figure we've got for BW9. You may recall I was concerned when BW8 had such a comparatively low attendance. I'm now more convinced that it was down to releasing the tickets so late. There's always a smaller gap between the "Summer" event and the "Winter" one (4 months compared to 8) so I have less time to drum up enthusiasm. In order to try to prove this is the issue I'll be putting the BW10 tickets up for sale as soon after BW9 as I can.

Conclusion
I'm really excited about the latest event in the Blog Wars saga. Around two thirds of the players coming along have been to at least one event before so I'm hoping that despite the larger crowd, it'll still feel like a friendly atmosphere. I'm especially looking forward to all the different armies on display. It'll be the first time I've seen the Skitarii models and whilst others may not share my view I'm looking forward to seeing the 15 Imperial Knights that will be there. I know they're not necessarily to everyone's taste but the model has really grown on me. Having so many different armies represented is amazing and in these days of netlists and spam it's refreshing to see so much variety.

I really hope I get to play against something different. One thing's for sure. I've never seen more colours on these pies! See you all in 10 days!
Posted by From The Fang at 17:00:00