So, suffice to say I was pretty excited by the Harlequins codex. They're not all-conquering by any stretch of the imagination but there's some innovative stuff in the book that I'm looking forward to putting into play. Whilst I'd love to have a full Harlequins force at some point, I'm going to start off by simply allying them with my Dark Eldar. Of course, you could ally them with Craftworld Eldar (or the Imperium, Tau or even Orks for that matter) but since I no longer own any Eldar, I won't be discussing them here. Besides, I don't think Eldar need much help from Harlequins and they don't lend themselves as well to an alliance as they don't have a decent transport for the Harlies that won't hamper their assaults.

Dark Eldar on the other hand, there's a match made in heaven I reckon. If nothing else, there's the fact that their Raiders are open topped, and hence assault friendly. The other thing is that, with the new codex, Wyches are pretty much a total waste of time now. This is partly because you can cut them down with bolter fire (since they can't start with FNP) but also because they lost access to haywire grenades. Combine that with their relatively high cost and I doubt we'll be seeing them on a tabletop any time soon. This leaves a big hole in the Dark Eldar army for a decent assault unit. In come the Harlequins then.

For the purposes of this article I'll be assuming that you're only allowed two detachments and I'll be working with 1,750 points (as this is the norm at my FLGS). Of course, with more detachments available you could take multiple formations alongside your DE. As I discussed in the last post of the Harlequin codex review, the stand out favourites amongst the formations are the Cast and Revenge. Let's not forget the Masque detachment itself though which has its merits.

My aim here isn't to tell you what I think is the best possible combination of DE and Harlequins but rather explore some options to get your imagination going and inspire your own lists. Are these lists invincible? Far from it. In fact they're all going to be pretty flimsy especially if you don't go first but that's what DE players are used to right?

Dark Eldar plus Cast of Players
For those not familiar with it. The Cast of Players allows you to take a Shadowseer, Death Jester and Troupe although this is without the crucial Rising Crescendo rule. Here's how I'd run the Cast: 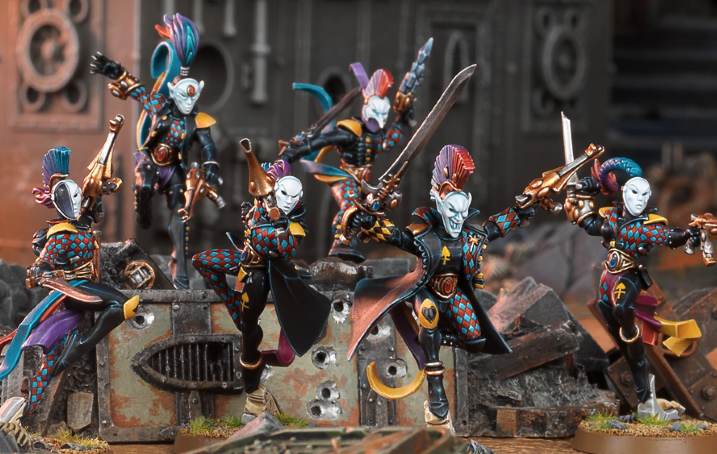 
That clocks in at 335pts which is pretty expensive for a squad of T3 models but with the Shadowseer they should be reasonably durable. You need them to hit hard though so having those Kiss of Death attacks will come in handy. The squad will have 37 S4 attacks on the charge, 4 S6 AP2 and 5 S6 from the Shadowseer. All of these attacks will be hitting at a minimum of I6 with WS5 too. That in itself gives them pretty good protection in combat with the Shadowseer providing the cover from shooting. Of course you can drop a model or two so they can fit in a Raider.

The Mask is in there to create a nice combo with the Death Jester for a -4 Ld penalty when using his Death Is Not Enough rule. We can make this even better with out DE allies by adding in an Archon. Giving the Archon the Armour of Misery, a webway, an agoniser and shadow field makes him pretty pricey but awesome. That does bring the whole squad total to 500+ pts though which is a big chunk of any army. That being said, when they do arrive from reserves you'll be getting a hit from Psychic Shriek at -4 Ld plus another unit shot with Death Is Not Enough at - 6 Ld. Best hope they arrive early on then!

This unit should be able to deal with most things pretty effectively in combat but we'll still need some firepower. Let's flesh out the rest of the army then. For the DE Troops I'd go for four units of Kabalites in venoms with a blaster each. I still think the blaster is worthwhile for extra anti-tank. Add in a couple of units of haywire Scourges and a couple of Ravagers for more anti-tank. That leaves a decent chunk of points spare still at 1,750pts. I think we need a distraction to keep everything alive long enough for the Harlequins to arrive. That comes in the form of a big Reaver unit which is a decent combat threat and packs heat lances to help with anti-tank.

Here's what I've got then:

We can strip it down somewhat to go down the "more boys, less toys" but there isn't much else I'd want. Perhaps another Venom, Ravager or even a flyer but I think the list is decent on most counts. It can hammer high toughness models like Wraithknights, kill off infantry and still be able to break vehicles apart. It does struggle with flyers but that often won't be a problem. It's flimsy as hell of course but that's true of any DE list. My worry here is that the Harlequins are reduced to a gimmick. You're basically including them just to get the leadership modifiers. Don't get me wrong, that could be disgusting but you might wait until turn 4 to get them and there'll be little of the rest of your army left by that point.

Dark Eldar plus Faolchu's Blade
This time we won't be including any Players at all and instead we'll be throwing in some Harlequin vehicles. Let's take a look at my proposed list: 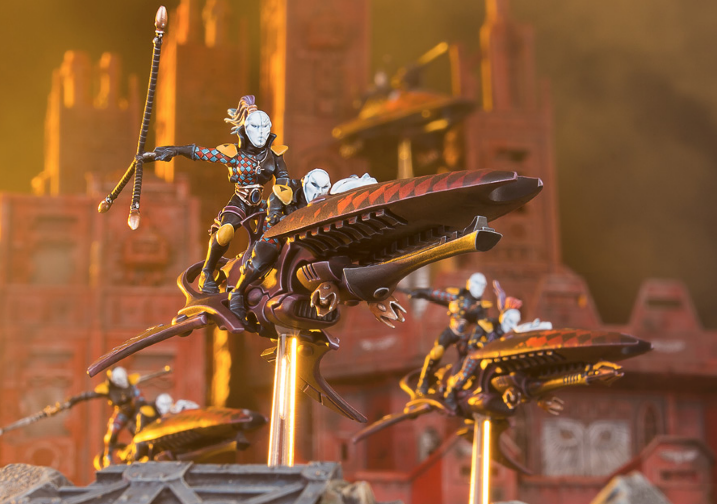 As you can see, there's a huge amount of haywire firepower in this list. It's not out of the question to be able to take down multiple vehicles in a single turn. Alternatively you can combine a few units to bring down something like a holo-fields wave serpent or an Imperial Knight. In fact, it's quite likely you could down an Imperial Knight in one shooting phase given how mobile some of your firepower is. Don't forget the haywire cannons/blasters use a small blast so hitting two closely deployed vehicles is feasible. Not only that but your S4 blasts are decent for taking down troops too. Remember frag missiles on those long fangs back in 5th? It's actually better against S3 than your Venoms' splinter fire.

Aside from the haywire we've got 5 Venoms with their poisoned fire and blasters from the warriors plus more poisoned fire. The Archon's court is a bit of an experiment but having a deep striking venom with the Medusae's eye bursts could be nasty and the Sslyth help with survivability, especially once a Medusa dies and you're effectively T5.

As with any DE or Harlequin list the mobility is a key factor. This list can cover ground at a rapid pace which should serve you well in Maelstrom games.

Pure Harlequins
Let's take a look at what we can do with the Harlequins on their own. In this scenario I think the Revenge is the best choice as that re-roll of 1s on invulnerable saves will help matters.

Doesn't look much for your 1,750 points does it? Well you're getting 4 AV10 vehicles, 4 bikes, 3 large squads plus a Solitaire running around. That's not a lot compared to the DE lists we've been looking at. You could consider using a Revenger and a Blade formation together to get in some more vehicles at the expense of smaller Troupes (which could then fit in the Starweavers). I'm not convinced this will work particularly well on its own. Of course you're getting those re-rolls from the formation but I can't see that helping when there's tons of firepower coming your way. It's such a shame you can't get a Solitaire into a DE list more easily as I really want to try one out. Obviously you can spend less points and use a Masque but you don't get much from the DE portion once you have. Let's have a quick look though.

Dark Eldar plus Masque
This is a bit of a tight squeeze at 1,750 but let's have a go anyway: 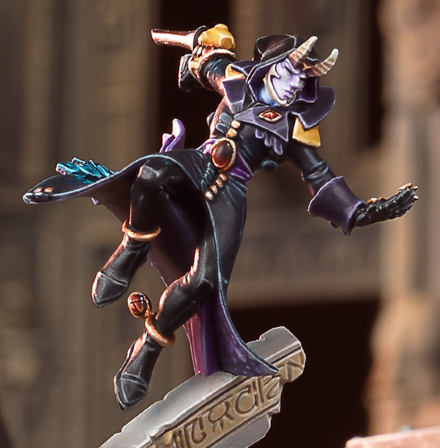 In this list two of the Troupes ride around in the Starweavers and the third gets the raider. As with the other lists I'm sure there are some optimisations to be made but it's a start to show you what can and can't be done. You can tone down the Archon quite a bit to get more stuff in, he's really only there for the webway so ditching the shadow field and agoniser is an option. Of course, with the raider you could ditch the webway altogether and hope you can survive to get close enough (Nightshields would help here). As a DE player it feels wrong to have so few Venoms and the list in general feels a bit Jack of all trades, master of none. You could always lose some of the upgrades and throw in some empty Venoms in Fast I suppose. As I said, it's a tight squeeze and I'm not sure it really works.

Conclusion
It's certainly possible to combine Dark Eldar with Harlequins. The Cast and Blade formations are obviously the easiest way. I'm not sure how good Harlequins are though without Rising Crescendo and decent numbers. You start to feel like you could get more for your points from Dark Eldar units. Either way, we're not talking about top tier tournament lists here as I'm not sure either codex is capable. Just like the Dark Eldar, Harlequins will take some finesse and skill to use in battle.

The unexpected standout list for me here is the DE plus Blade. The formation bonus for the Blade is a little wasted as if you're Jinking you're not firing Haywire but at times it might keep your units alive as they reposition. I really like the idea of having so much haywire against something like Necrons or Imperial Knights. Of course Necrons would make short work of the DE/Harlequin vehicles in response though.

A pure Harlequins force can work but I'm not sure how effective it would be. Let's not forget that if you go first you're likely to have Veil to protect your Troupes which could really help in getting them in combat safely. Although with just six plus D6 warp charge you might struggle to cast anything else.

I'm intending to play test the DE plus Cast and pure Harlequins lists. I'll be heavily proxying until I decide whether I like them or not. I've picked up a Troupe and Shadowseer and will probably grab another Troupe and a Death Jester at some point. I'll report back after my games in a couple of weeks. I hope this article has given you something to think about though. Sorry it's so long!
Posted by From The Fang at 17:00:00