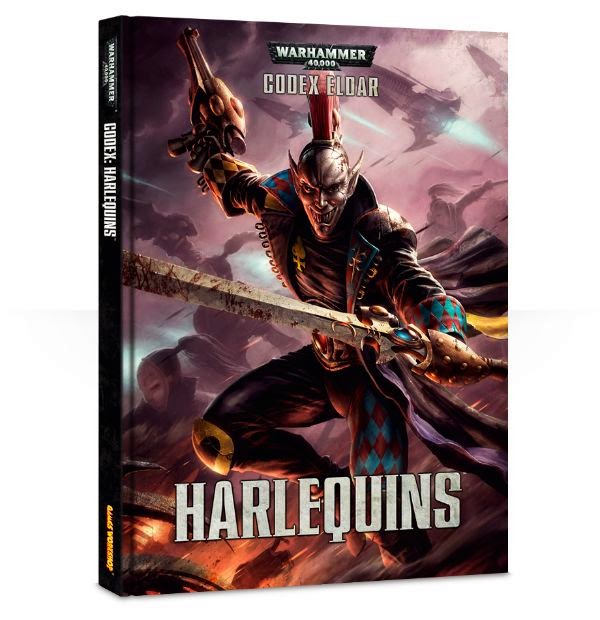 Firstly, let me apologise for the lack of Necron codex review. Not having played Necrons I feel that I'd struggle to write the reviews and they'd probably take me a long time. I'm trying to focus more on my hobby stuff at the moment so blogging is taking a back seat for a change. Usually it's blogging that stops me hobbying so I think it makes sense to have it the other way around. Matt is more familiar with Necrons but also lacks the time at the moment for a review. Perhaps in future he'll find the time.

All that being said, I picked up the Harlequins book yesterday as I figured they'd make a great companions for my Dark Eldar and they have some beautiful new models. Some of which are a little to similar to the old ones for my liking but that's a debate for another day. Anyway, since the new book is a pretty short one I thought it wouldn't be too much hassle to write a review and it'd help me decide what, if anything, I want to buy to run with my DE.

First Impressions
The book is stunning. There's tons of artwork that I haven't seen before and all in lavish full colour. I think the fact that they've made it 96 pages means they've needed to find something to fill what would normally be taken up by numerous datasheets at the back. The solution seems to be a mixture of jaw-dropping artwork and multiple formations. It feels like a cross between a full codex and a supplement really. There's the formations you'd expect from a supplement but the new units that you wouldn't normally find in one. Clearly GW is branding it as a new codex but it's not quite bulky enough to really be one. I suppose it's got significantly more options than the Imperial Knights book though.

They seem to have gone down the line of buffing the rules to make the models sell. There's some very good stuff in this book. The general feel is more like Dark Eldar than Craftworld Eldar with AV10 vehicles and flimsy units. That being said there's a decent mix of units in here that tie in quite well with both of their Eldar brethren.

The codex also details the levels of alliance for Harlequins which, as you'd expect, has them as Battle Brothers with DE and Eldar. Curiously they're Convenience with both Tau and the Imperium and Desperate with Orks. Everything else is Come the Apocalypse.

Harlequin Masque Detachment
I was initially confused as to why people were saying you could only use this detachment if you wanted to field Harlequins. That's until I realised that there are no HQs in this book which means you can't meet the compulsory requirements for a CAD or Allied Detachment. That's a bit of a shame but I can understand the logic. Even so, there are plenty of formations that you could add to an army (such as your Blog Wars army). 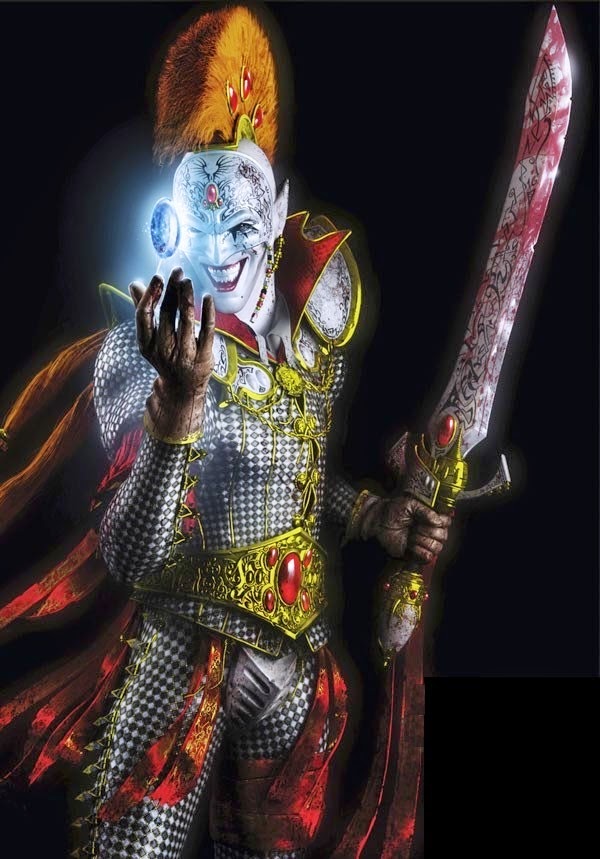 The detachment is a strange one. You must have 3 Troops, 2 Fast and 1 Heavy and have the option for a further 7 Elites. That's not so restrictive in a GW style army with several detachments but in tournament play it might be difficult to field them. It's actually going to be pretty hard to find enough stuff to run them as a standalone army at 1,750pts or above. That means it's likely that they'll be seen alongside DE or Eldar.

Anyway, the detachment gives you a re-roll to your trait (only on the codex traits and only for Troupe Masters) and, more importantly, the Rising Crescendo special rule. This allows models with Fleet to both Run and Charge. That's a big deal. It's bringing things back to 5th edition and making me wish they'd given this to wyches. It's not unreasonable to be getting second turn charges or even first turn if your opponent goes before you. Remember Fleet allows you to re-roll both run and charge range dice so you've got a good chance of covering some serious ground.

Warlord Traits
Unlike other armies the Harlequins can choose from three different trait tables. These are Light , Twilight and Dark. The first three traits are the same on each table with re-rolls of 1s To Hit and saving throws, a 4++ save for your warlord and an extra inch on every move they make e.g. run, charge and consolidate. The last one is awesome as, over the course of the game, this can make a massive difference. How often have you failed a charge by an inch or not quite made it into cover?

Here's a quick summary of the rest.

Light
4 - add 4 to Seize which makes it a 2+! That's awesome. Let your opponent go first and watch them squirm trying to decide if they should gamble or not.
5 - allows some units to Deep Strike, Infiltrate or Scout - again good for covering the ground with your paper units.
6 - redeploy or reserve D3 units - also good for making it difficult for your opponent.

Twilight
4 - add or subtract 2 from variable game length - again awesome. How often do you really want a turn 6 or really hope it stops at 5?
5 - Instant Death on 6s - great when combined with a Kiss for 5+ but obviously a little situational.
6 - single 24" move for warlord and his unit - good for grabbing objectives, particularly in Maelstrom games. That or repositioning if you find yourself out of the fight.

Dark
4 - not great as most of your opponents will ignore Fear anyway.
5 - warlord and his unit play an extra turn - slightly situational but could prove awesome and game winning.
6 - like Lukas' Last Laugh ability. Can be devastating if it's an awesome character you remove but not as great if it's just a guardsman.

Tricky to call as there are some great traits in here but I think Light is probably the way to go most of the time as it really messes with your opponent. There's some really interesting and unusual mechanics in use here and it's refreshing to see a set of traits that don't feel like the same old stuff with a new name.

Enigmas of the Black Library
As ever I'll talk about these more when I come to the units that I think will use them best but here's a rundown for now:

Storied Sword (Troupe Masters only) - a +1S Master Crafted power weapon. It's unlikely to tempt me for the points but obviously good in a challenge against a 3+ save character.
Crescendo (Troupe Masters and Shadowseers only) - Not much better than their standard pistol but worth it if you've got 5 points spare though.
Mask of Secrets (Shadowseers only) - Fearless is always good (although Ld10 isn't much worse) but interesting if you can combine it with the Death Jester's abilities. It's a shame he can't take it himself but you'll want a Shadowseer anyway - more on that later.
Cegorach's Rose (Troupe Masters and Solitaires only) - Master Crafted and Shred for a Kiss. I'd say this stands out as in a challenge it gives you a great chance of Instant Death.
Starmist Raiment (Any Character) - since you're going to be using Run a lot this can make your character more durable for a combat phase but expensive for something that only works some of the time. Might be worth a pop for your Warlord though.
Laughing God's Eye (Any Character) - very expensive for something you won't use a lot since a lot of Psychic powers don't target anyone.

Conclusion
That'll do for the first post. I'm pretty impressed with what I've seen so far. There's a lot to love about this book. I'll probably cover Troops, Fast and Heavy in a single post, Elites in another and the formations in the final post. I'll then start to look at how I can combine these guys with my Dark Eldar for a tournament at some point.