In spite of the many doubters (myself included), I've actually been making decent progress towards getting an entire table full of snow/ice terrain completed. In the last post I showed you a test piece I'd been working on. I've since applied the same technique to the other two 3rd edition ruins I have in my collection which can be seen below: 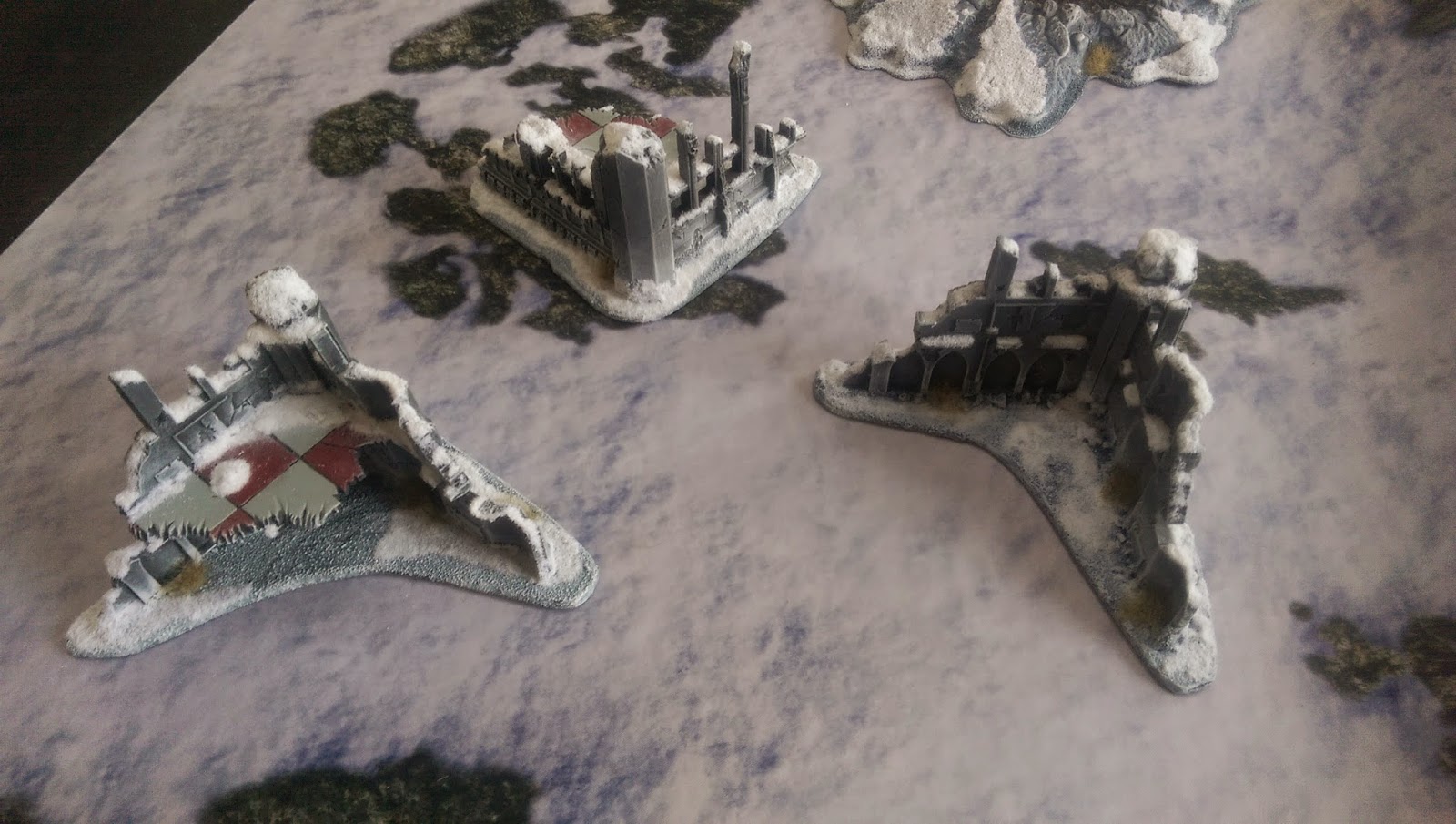 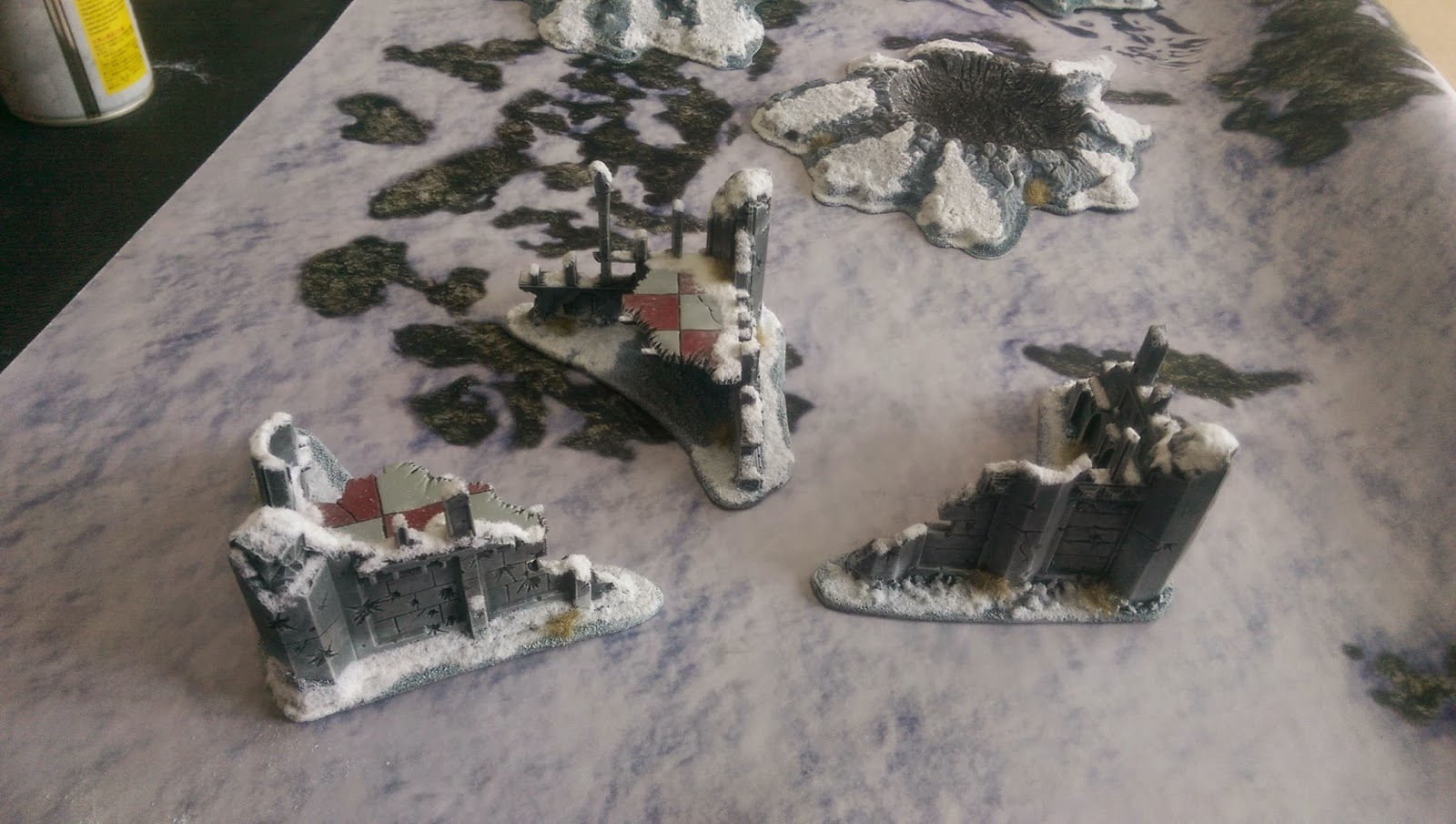 The ruins themselves were already painted but the bases got a coat of The Fang followed by Fenrisian Grey (both applied with my airbrush). I then drybrushed Ceramite White (since it's thicker than White Scar) before adding Citadel Snow and some Army Painter Winter Tuft. The drybrushing wasn't limited to the base though, I tried to work it up the walls at little way to make them look frosty. I hope this comes across. 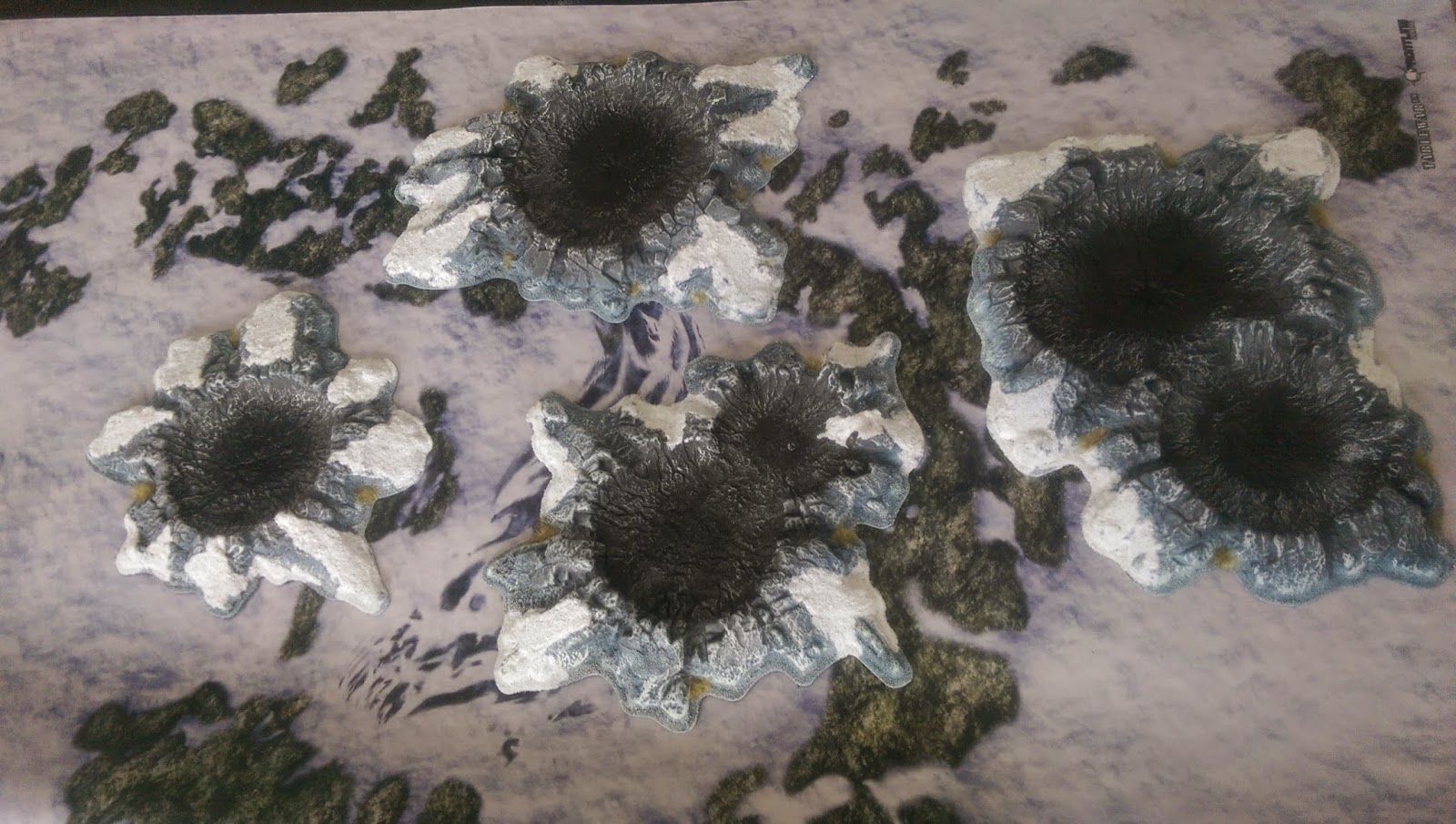 Whilst I had the airbrush out I decided to attack my Moonscape craters too. You'll remember that one of them is mounted on the base of my Shrine of the Aquila but the remaining four only had a black undercoat (plus some sand around the edge) until I got cracking. I covered the whole crater with Mechanicum Standard Grey before applying The Fang around the outside (mostly on the flat bit around the edge but also up onto the crater slightly). I then hit this with a lighter coating of Fenrisian Grey. Finally I sprayed the middle of the crater with Abaddon Black to make it look scorched. This process took less than an hour thanks to the airbrush (and that includes the airbrushing on the corner ruins too). I'm very glad I picked up an airbrush at this point as getting the base colours down is tedious even with a tank brush and you end up struggling to only put a thin coat on. 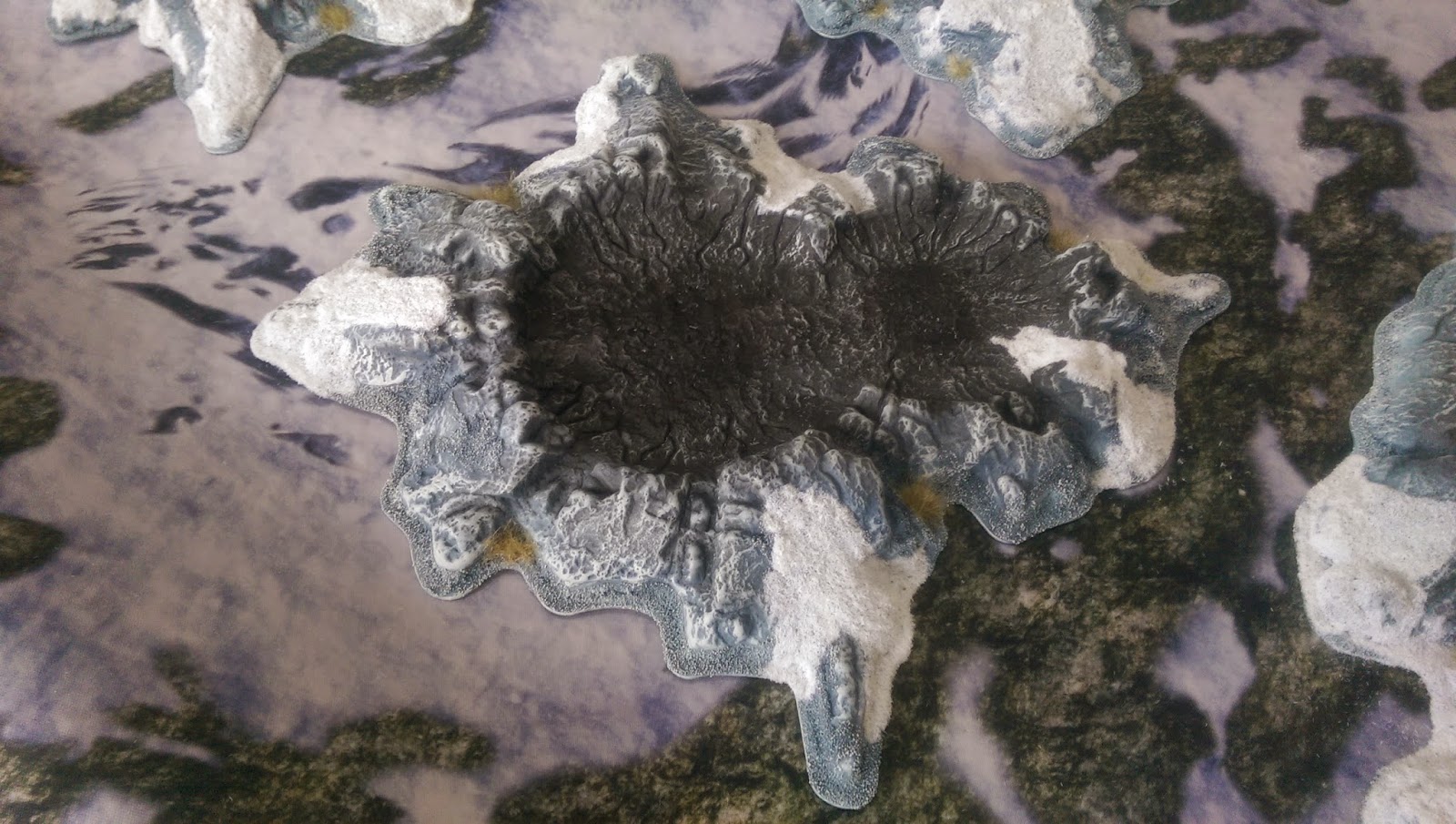 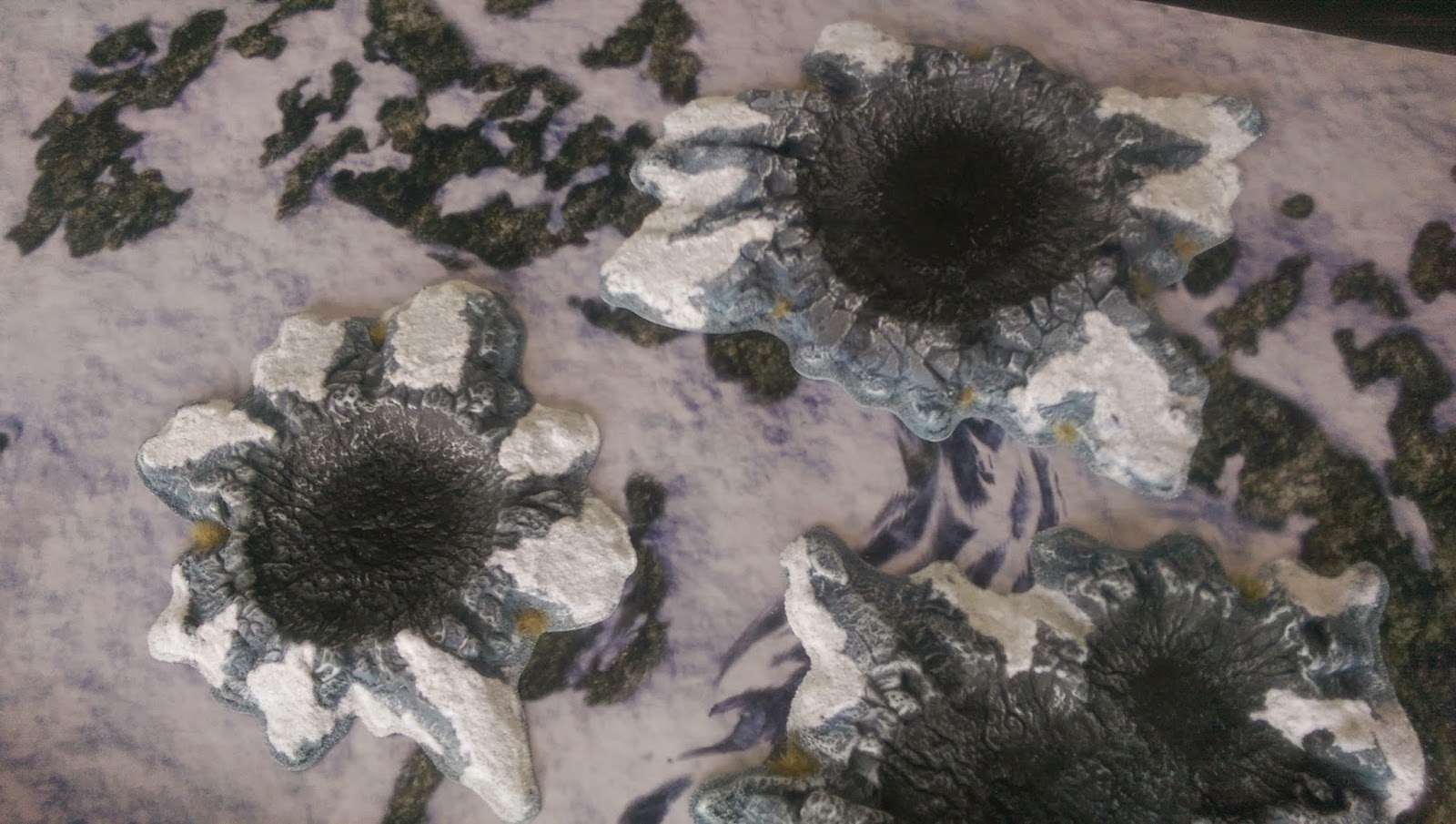 I then drybrushed the whole thing with Ceramite White. I focussed this more on the outside edge as this was more frosted but also picked up the edges everywhere apart from the very centre of the crater. My thinking here is that these craters come from a battle before Winter set in. Maybe a previous war actually caused a kind of nuclear winter and that's why the planet is frozen now? Of course this would mean you'd expect there to be snow in the middle too but I theorised that repeated use as a fox hole would mean little was left in the centre. Anyway, I finished the craters off like the ruins with Citadel Snow and more AP Winter Tuft. 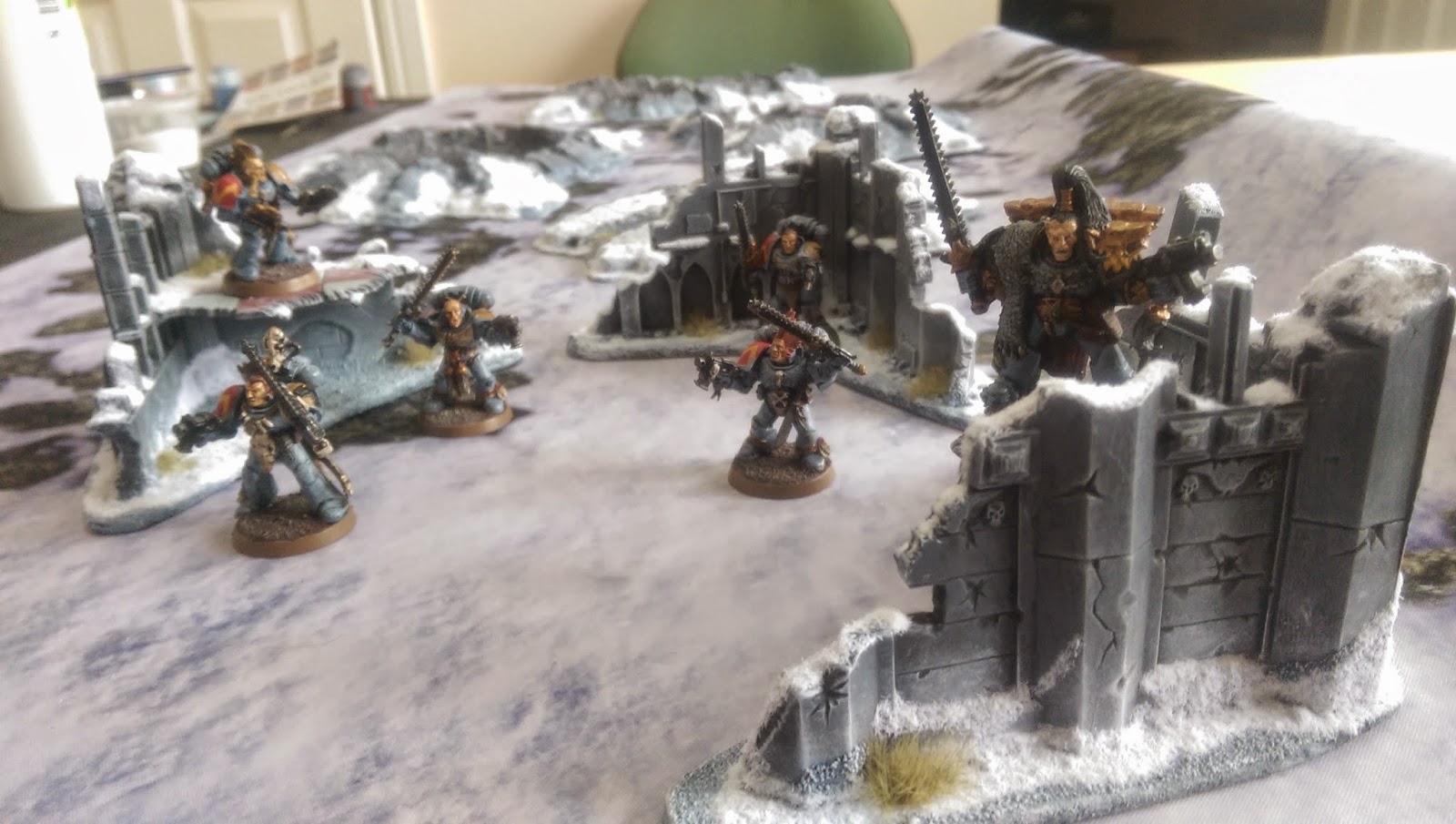 Finally here's a shot of Ragnar and some Blood Claws using the ruins for cover. This helps highlight one of my current problems. My Space Wolves were based to match my old brown home made Realm of Battle board but they don't fit in with the new terrain. Problem is, the colours I'm using on this terrain are effectively the same as their armour so you wouldn't get much contrast between the model and the base. I think I'm going to stick with Graveyard Earth/Steel Legion Drab for their bases for now though as I intend on revamping the Realm of Battle board at some point. When I eventually get around to painting my DE and Orks though I'll probably give them snowy bases. The Tau have a desert them but that's going to work with the revamped RoB board too.