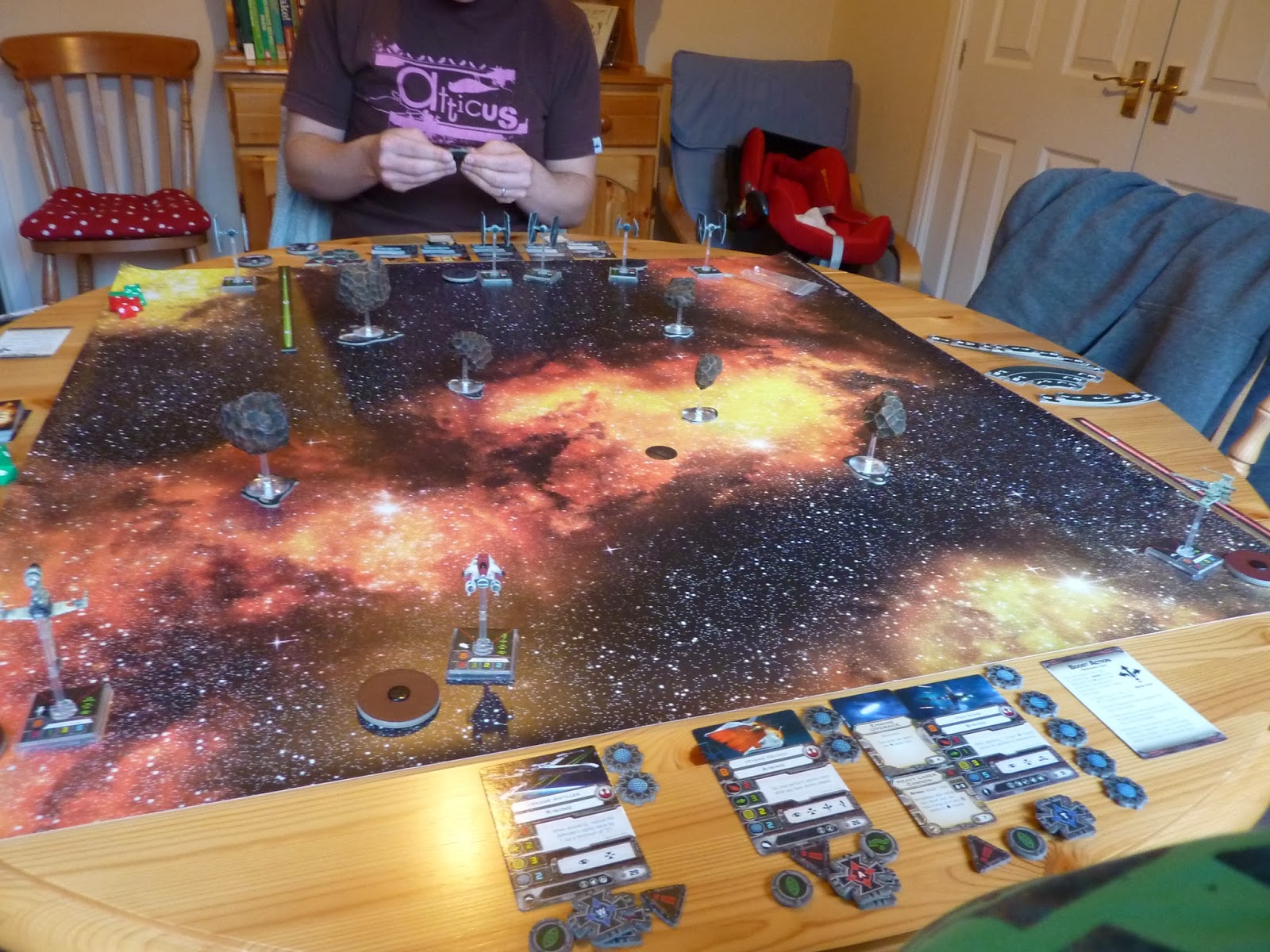 Our previous game of X-wing had involved a Firespray and YT-1300 which had pretty much dominated the field. This time around we decided that neither side should have big ships. I'm still trying things out at the moment but we fielded the following:

I was pretty heavily outnumbered then. If the Imperial ships could focus fire on me then I'd be pretty screwed. Matt was looking to take his first win against me (outside of the missions). 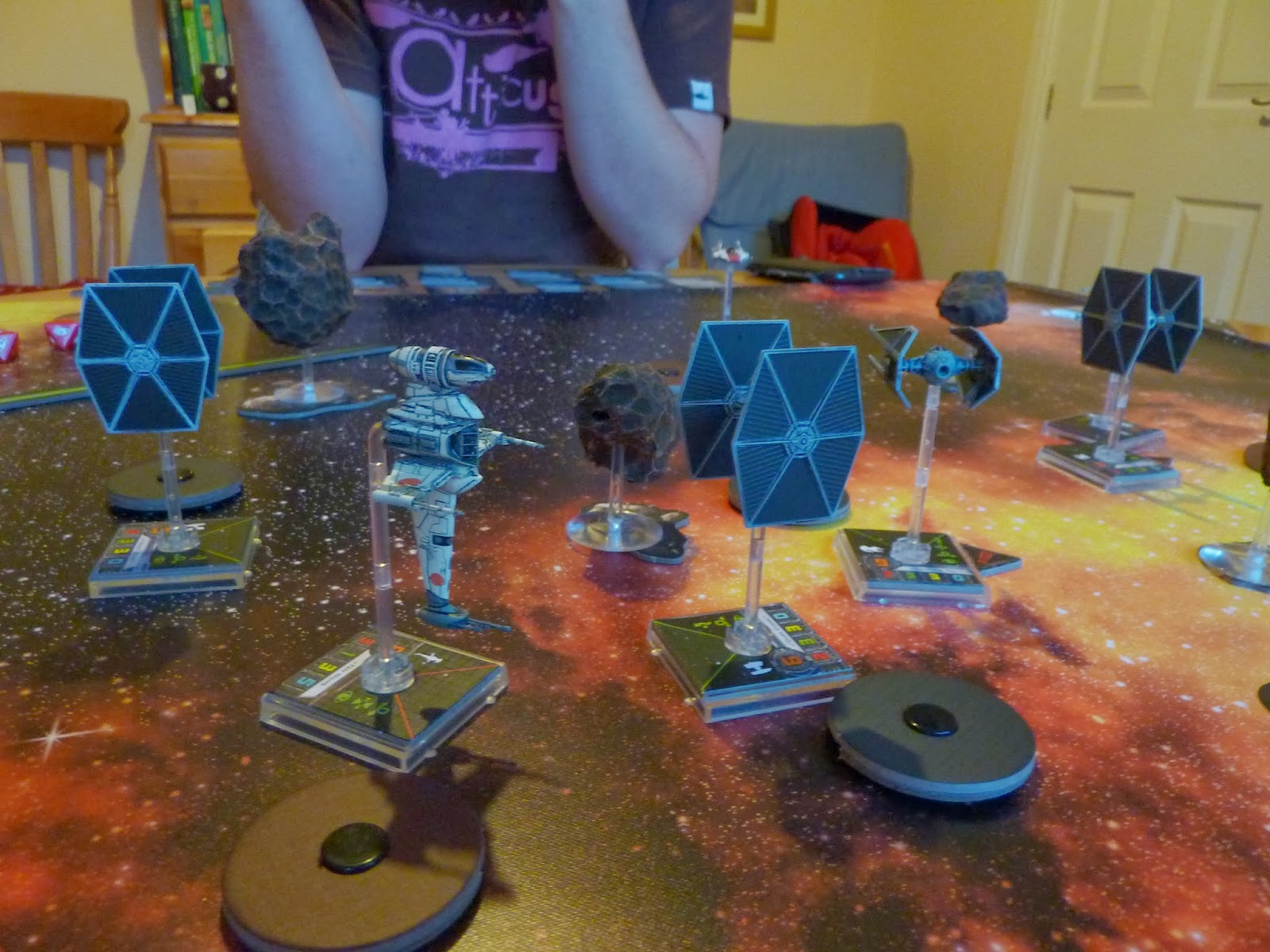 All ships on both sides blasted towards the centre of the asteroid field but minimal damage was done to either fleet at long range. Then...errr..... some other stuff happened. To be perfectly honest I started writing this report the day after we played it (Dec 27th). It's now two weeks later and frankly I can't remember the details of what killed what. Suffice to say there were a lot of collisions with so many ships and asteroids to try and avoid. This hamped my firepower quite a lot as the target I was going for ended up overlapping me preventing me from doing anything. The sheer number of enemy targets made picking one out to focus on very difficult. The interceptor proved particularly difficult to deal with. 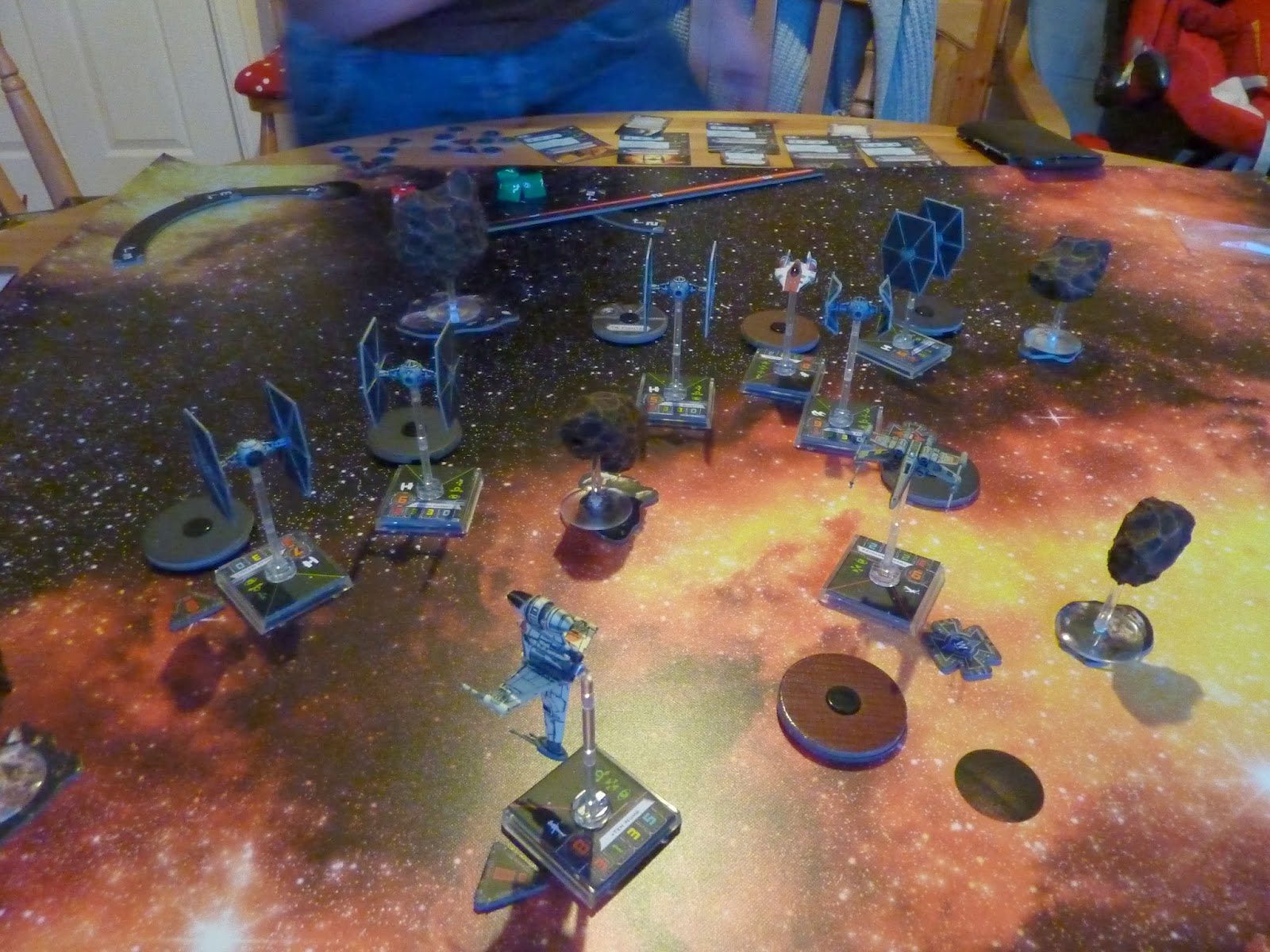 Ultimately I couldn't thin out the TIEs quick enough and their weight of fire was enough to bring down my ships one by one. I should've focussed my attention on one ship at a time better but I struggled to keep track of them all to be honest. At the end there was damage on several of the TIEs but if I remember rightly I'd only killed two. I think for the most part I forgot to use Wedge's special ability and I probably didn't make the most of Tycho's agility.

I can imagine that TIE spam is something that appears on the competitive stage. Trying to concentrate on individual ships is very difficult when they're running rings around you. We'd deliberately banned the Falcon but I can see that this is probably my best shot for dealing with massed TIEs. I've since played an 80pt game against Jamie (as that's all the TIEs I have on my own) and the interceptor proved deadly. Granted Jamie was rolling disgustingly well and I made a couple of mistakes but being outnumbered probably balances the 360 fire arc of the YT-1300. 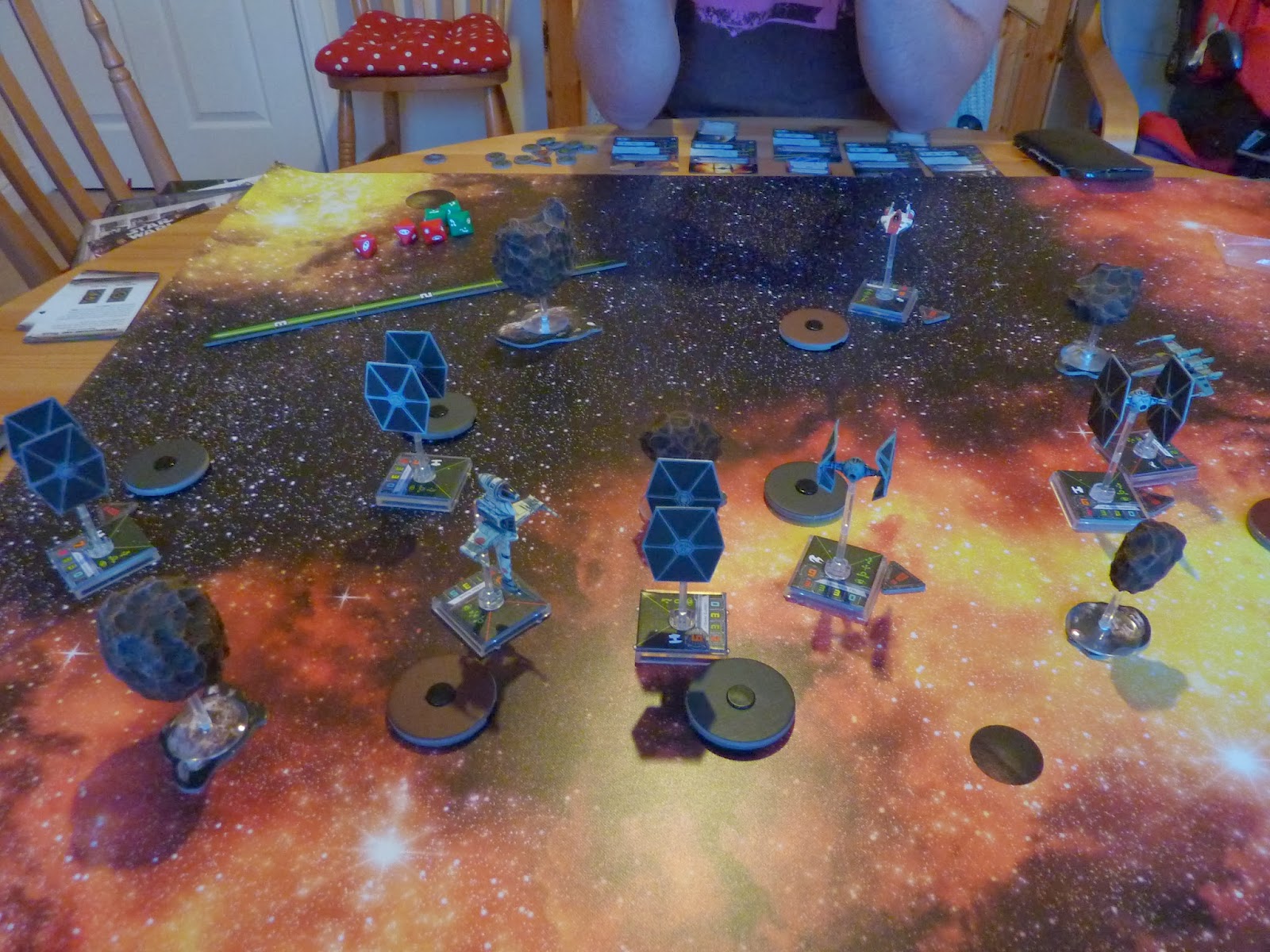 I have to say that's the thing that stands out with X-wing, balance. It's something we constantly harp on about with 40K but so far I'd say FFG did a pretty good job. Obviously there's some ships we haven't used yet like the HWK, TIE Advanced, TIE Bomber and Lambda Shuttle but I have high hopes that the rules of this game won't annoy me as much as 40K does sometimes. On the subject of rules the X-wing rulebook is pretty well written. Often you query something only to find the wording in the book is spot on. Failing that, there's a set of extensive FAQs which have so far covered everything we've needed them to. 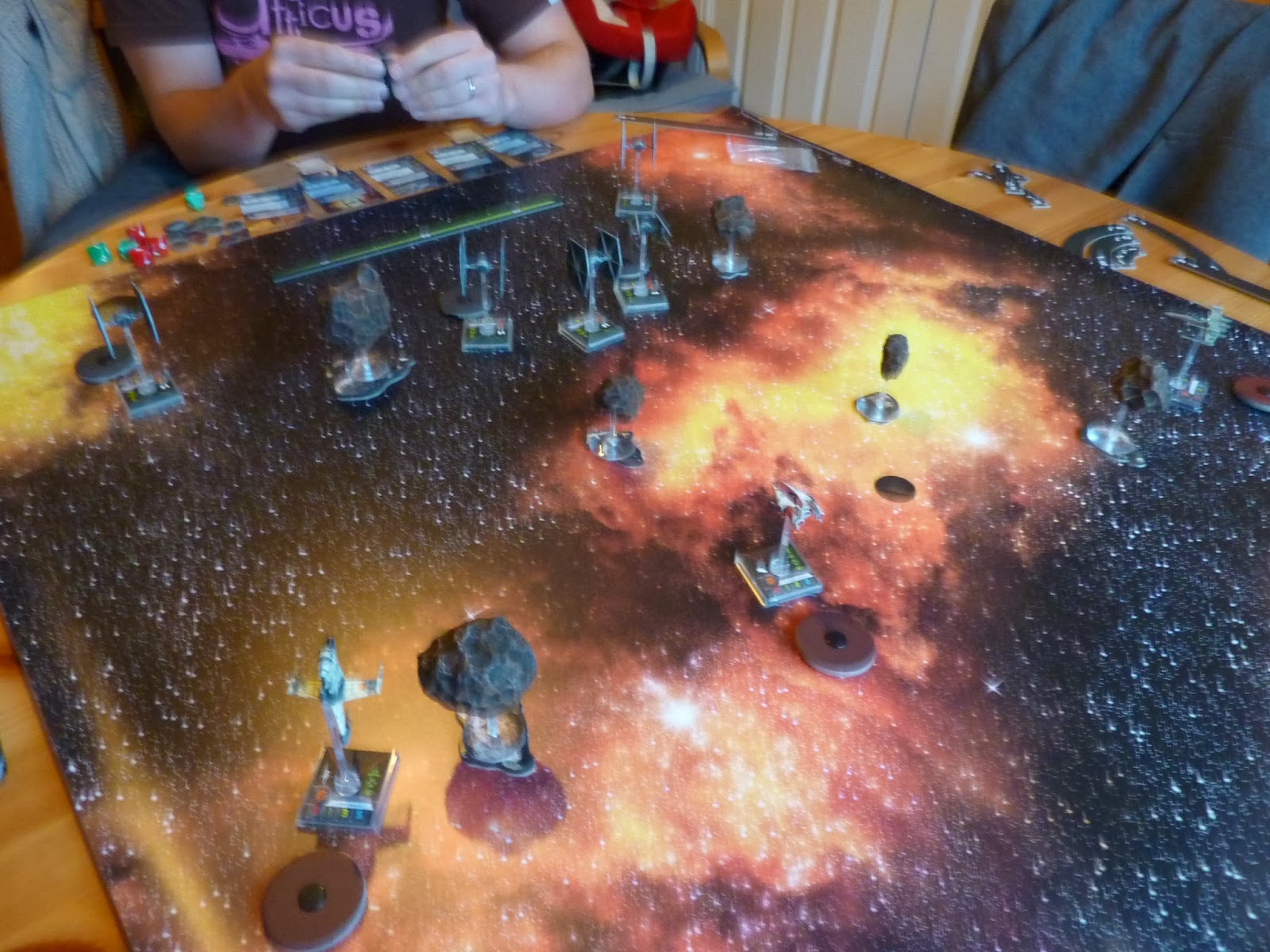 Right, that's enough gushing about X-wing for a while. Next post will be about our test games for Escalation and I can assure you I'm a lot less complimentary. Seriously though, I'd recommend X-wing to everyone. The start up costs are pretty low, especially if you're used to 40K and there's a whole heap of fun to be had. Apologies to those who don't want to read about it but I'm afraid there's likely to be plenty more where this came from.
Posted by From The Fang at 18:59:00