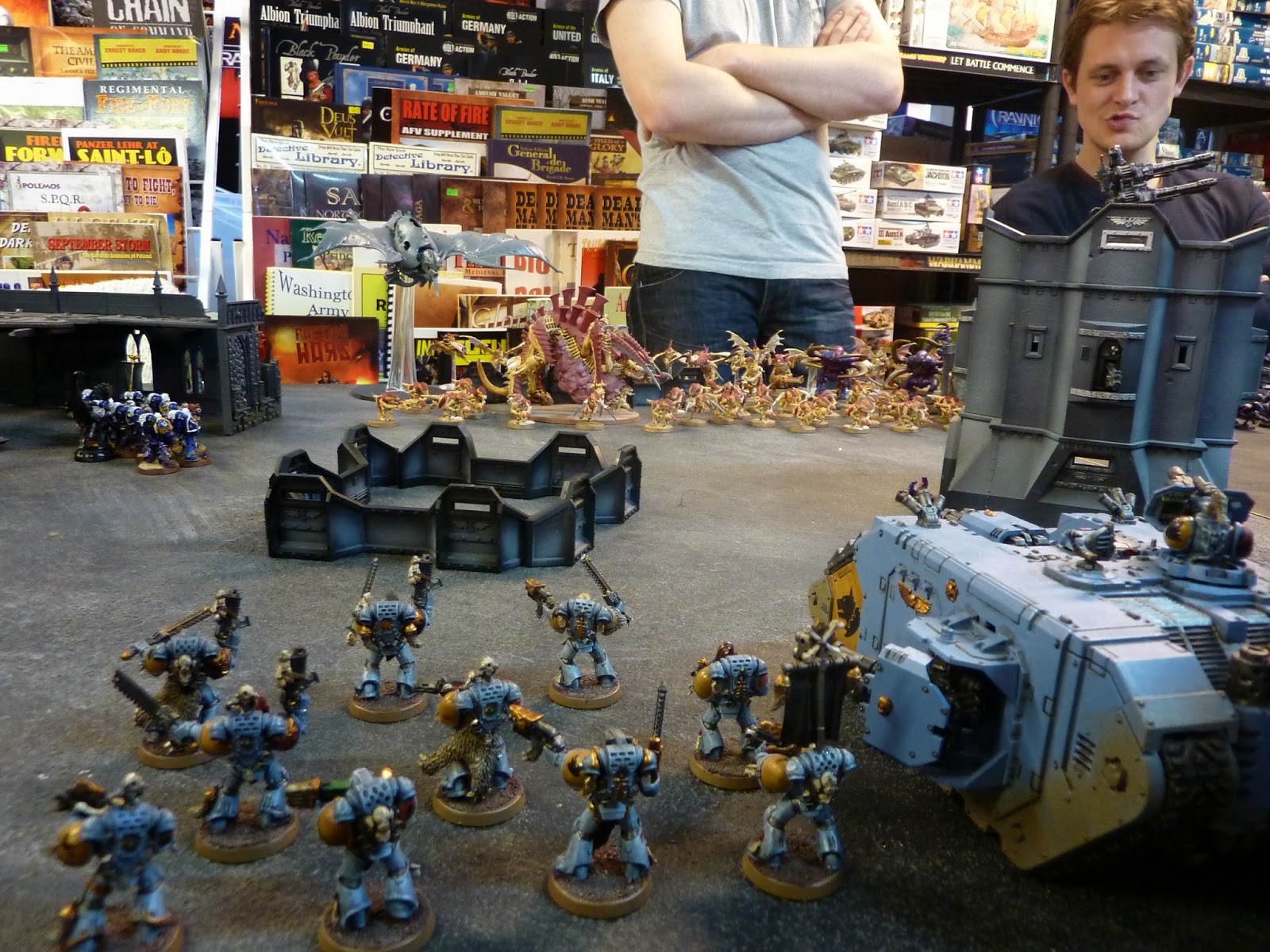 The final installment of this little trilogy of Tyranid battle reports is a mammoth one. Jamie, Dan, Matt and I booked a table in our FLGS (Wargames Emporium, Sheffield) last Sunday and got stuck into a 3,500pt doubles game (i.e. 1,750 each). Both sides were making the most of double FOC and cramming plenty of units in. The Imperium of Man was represented by the Space Wolves and Ultramarines (in this case a successor that looked suspiciously like Blood Angels!).

The Tyranid horde was represented by contingents from Hive Fleet Kraken and Behemoth.

I'd like to point out that the aim of the game was to have fun and test a few things in the new Tyranid codex rather than fielding particularly competitive lists. Obviously there were cheesy elements in both lists like double devourers on tyrants/fexes and our centurions but we tried to keep it to a minimum. 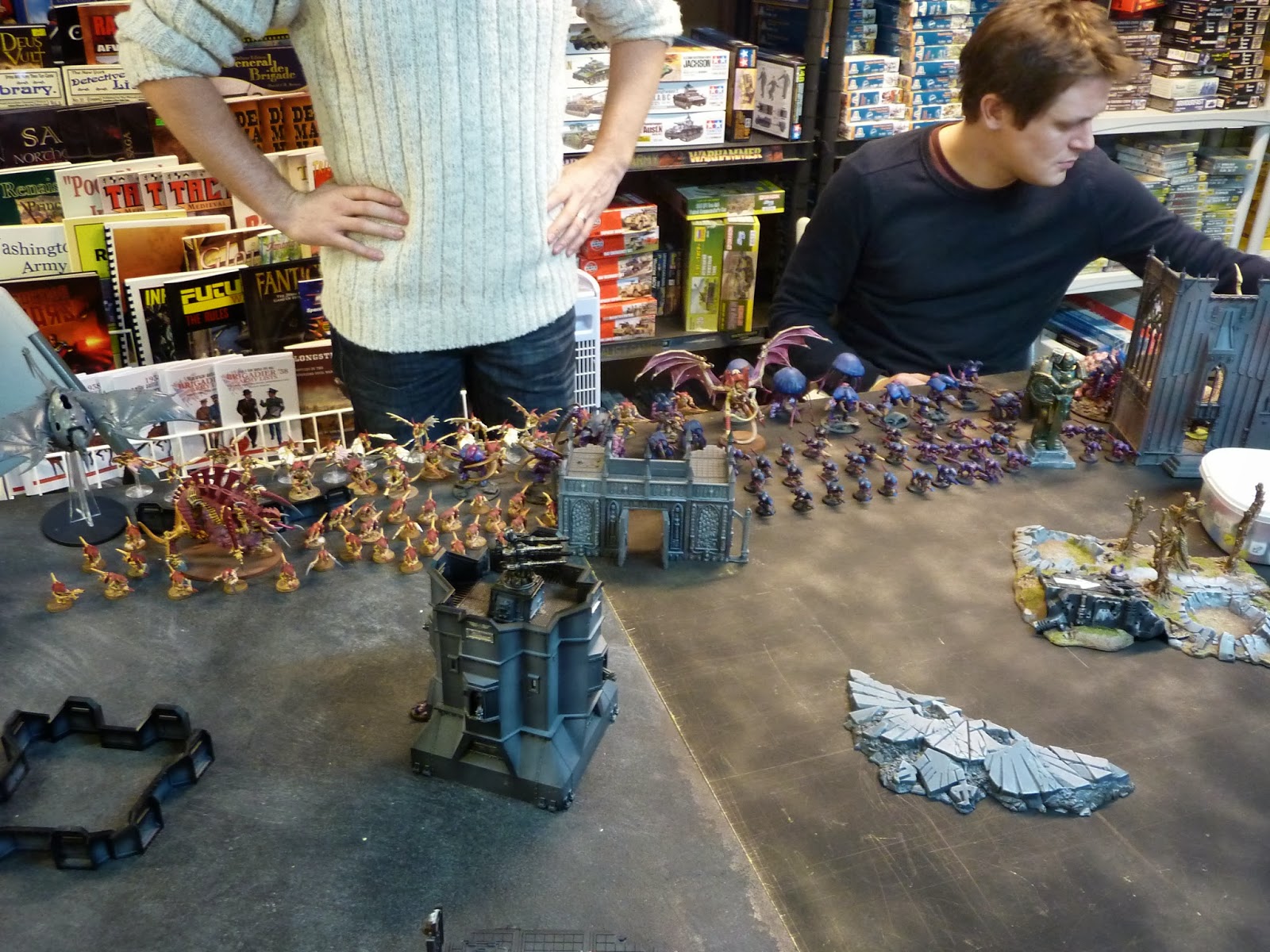 We'd be playing Big Guns and elected to use Dawn of War deployment as it was easier logistically. Tigurius got Hallucination, Prescience and Perfect Timing. The tervigons took Dominion. The tyrants got a mix of powers between them including paroxysm, warp blast and catalyst. We played with a warlord each and their tyrants got Synaptic Lynchpin and Digestive Denial as their warlord traits, Tigurius stuck with his trait and Ragnar got -1 to reserve rolls. There'd be Night Fighting on the first turn. Jamie and Dan got to pick deployment zone and won the roll for first turn too. They could barely fit all of their nids in their zone even though it was an 8' x 4' table! We spread our forces out so that we could try and spread the Tyranids thinly and prevent hordes of termagants from swamping us. 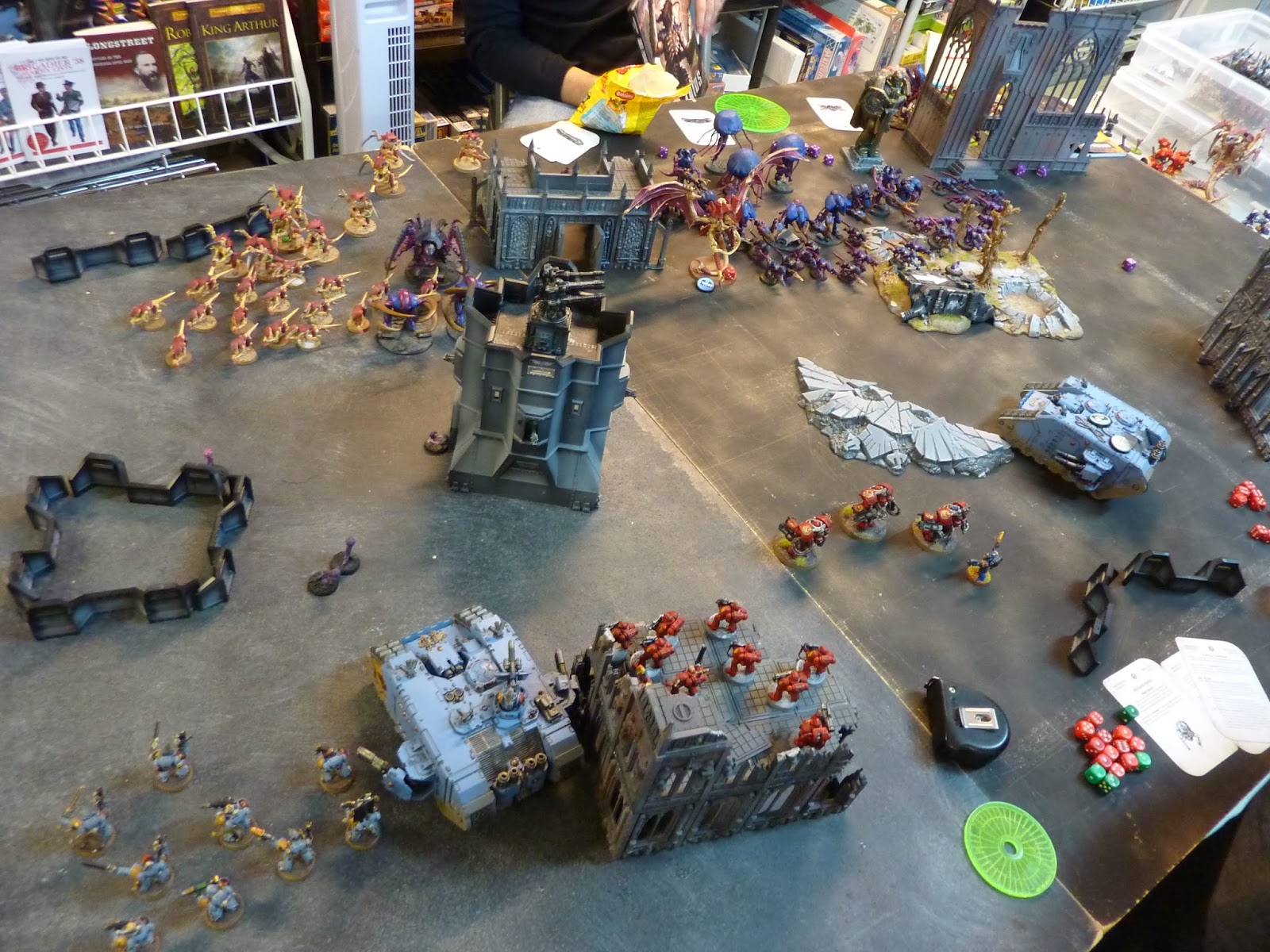 I confidently told Jamie and Dan that I was going to Seize now and to the suprise of us all, I actually did! This allowed us to bring down the sternguard on their left flank and with help from the jammy scouts who rended 4 times (I think, might've been 3) they downed one of the Tervigons straight away for First Blood. Elsewhere we caused a couple of wounds on a hive tyrant and thinned out the big termagant hordes a little.

The tyranid response was pretty brutal with Cassius and his sternguard being cut down to size by the gargoyles (who decided not to bother with Blinding Venom in a bid to kill the squad off instead). Cassius and a couple of sternguard survived the initial onslaught though and swept the gargoyles. The dakkafexes enacted their own vengeance causing 25 wounds on my grey hunters who promptly failed 10 of their saves wiping them out! The tervigon spawned something like 15 termagants but was corked in the process so there'd be no more bonus nids. The flyrant hit the land raider with warp lance but despite penetrating he could only shake the mighty tank. The biovores killed off a couple of tactical marines and pinned both squads and the harpy was similarly effective. Meanwhile the hive crone drooled on the scouts picking off a few. 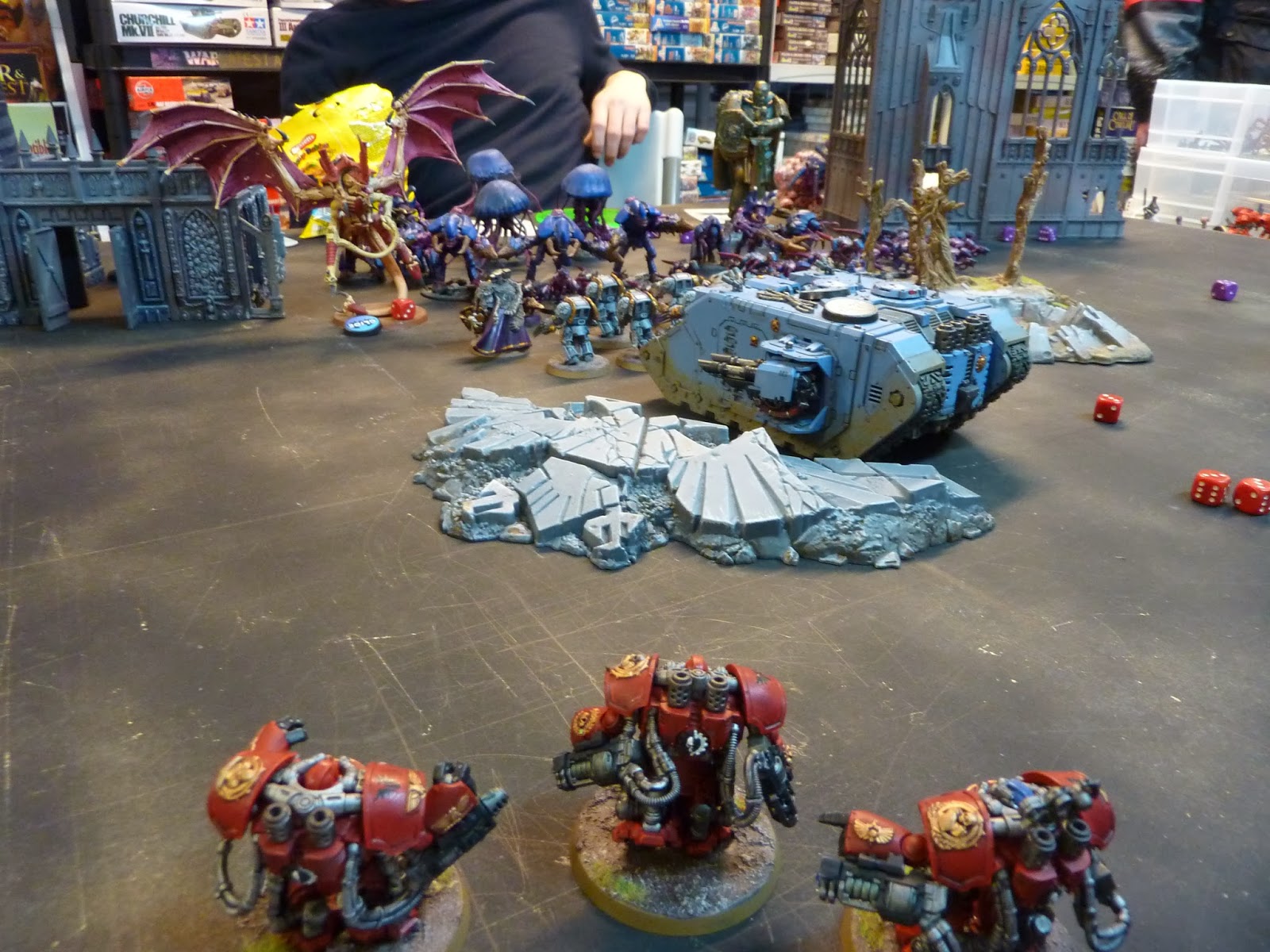 Unfortunately our flyers failed to arrive which meant we'd struggle to deal with their FMCs this turn. One of the assault combat squads arrived though and dropped in near the sternguard to support them in combat. Cassius and his squad headed towards the termagant blob whilst Ragnar's land raider disgorged him and his pack of blood claws who charged headlong into combat with the combat carnifexes easily dispatching them. Cassius was able to stay locked in combat with the termagants who surrounded him and prevent the warriors from charging next turn.

On the other side of the field the centurions made the dakkafexes pay for killing the grey hunters by wiping them out with their grav-cannons. Tigurius had tried to use hallucination on them but they'd denied the witch. The other land raider rumbled forward and Arjac piled into combat with the flyrant (who was downed by the land raider) whilst his terminators charged into a blob of termagants. The remaining grey hunters had lined up to charge the hive crone but despite forcing 4-5 grounding tests the crone remained aloft and only took a single wound. 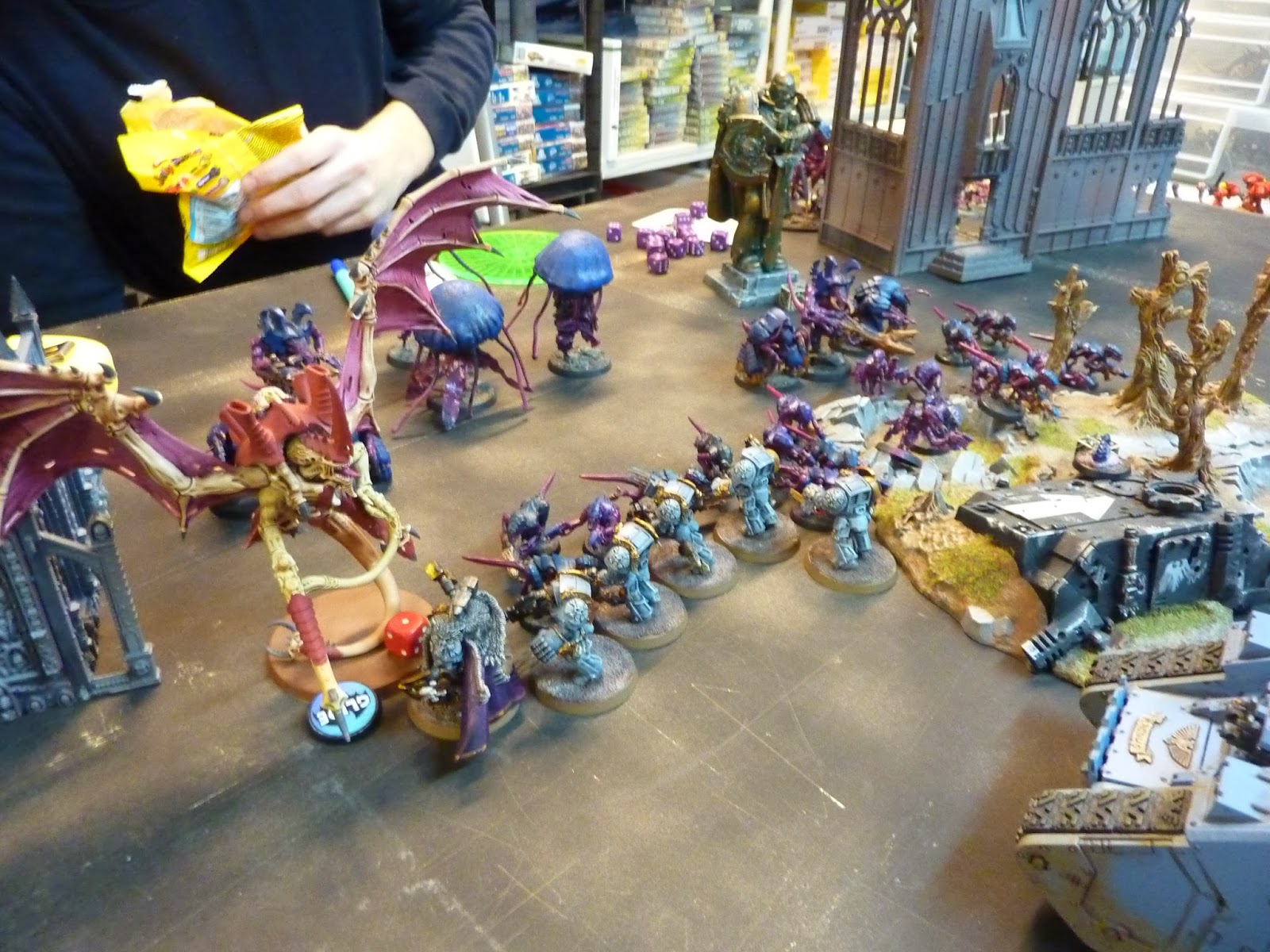 The crone stayed up in the air sweeping over the grey hunters before finishing off the scouts with this drool. The mawloc arrived, killed two of the three centurions and left the sergeant wounded. The warriors fired at the blood claws thinning them out significantly before charging in and leaving only Ragnar and a couple of the young space wolves alive. The hive tyrants elected not to charge into combat with Arjac and his pack instead happily allowing them to chip away at the termagants. The biovores killed half of the grey hunters and more tactical marines. 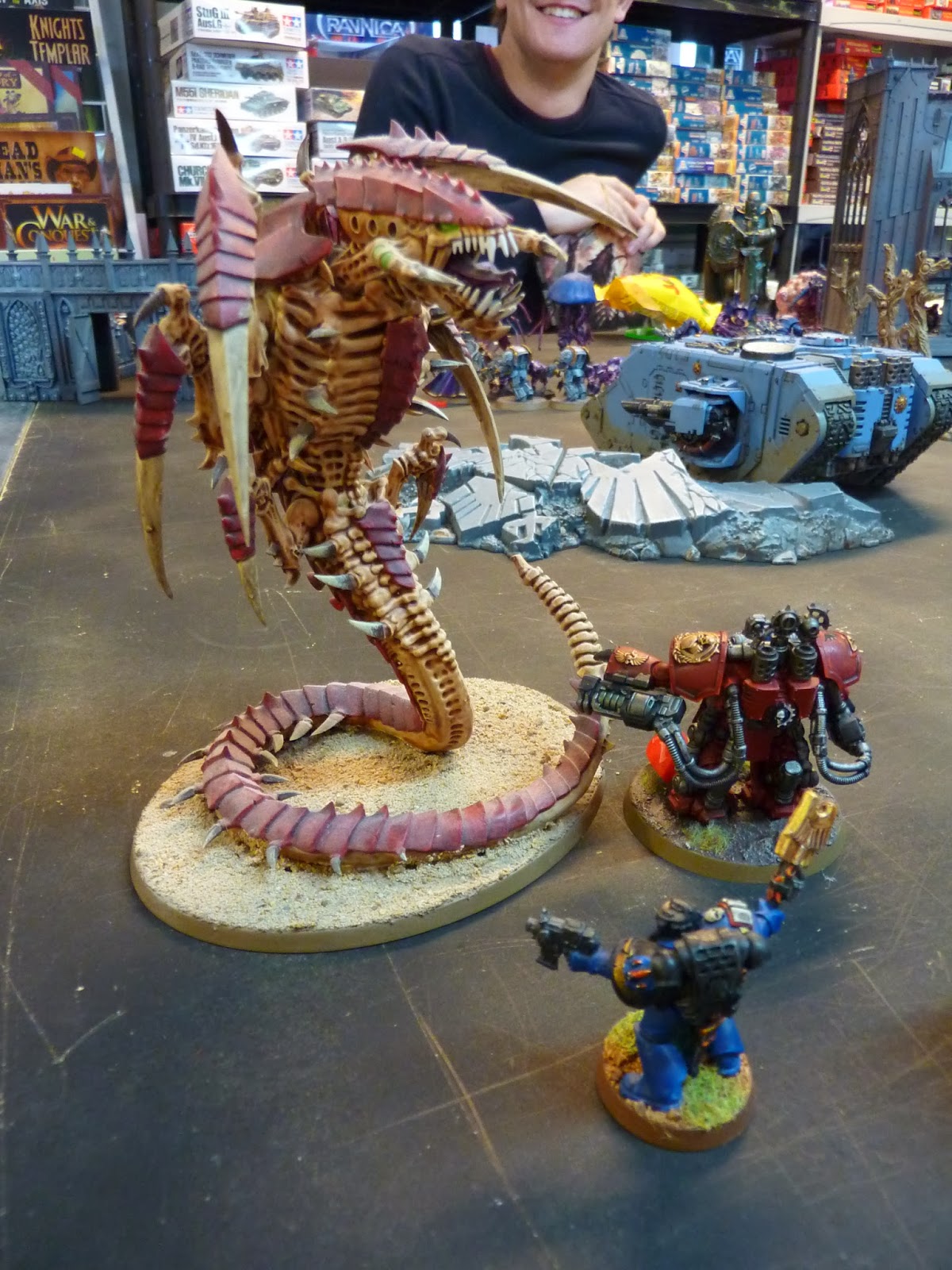 Tigurius tried to use Hallucination on one of the walking hive tyrants but once again Dan denied the witch. Our flyers finally arrived and lined up to try and take down both the crone and harpy (or at least force them to drop so the land raiders could finish the job). The lone wolf (who I'd forgotten to deploy) also arrived from reserve and headed in to take on the mawloc next turn. The flyers failed pretty miserably at their job with neither killing its intended target. Luckily the harpy was knocked out of the sky and the land raider was able to finish it off with lascannons. The crone survived the drop too but the hurricane bolters from the crusader were able to finish it off. Tigurius and the remaining centurion tried to gun down the mawloc with help from the tactical squads but it remained on 2 wounds meaning they'd need to charge it to prevent it burrowing. Luckily they survived the combat this turn but with Tigurius' rod only being AP4 the mawloc made its saves.

Meanwhile the assault marines went in to help Cassius out and luckily left a single termagant standing to protect them from biovore fire. Ragnar found himself alone and surrounded by warriors whilst Arjac and his terminators were still chewing through gaunts. The remaining grey hunters hopped into the land raider Ragnar had vacated.

The tyrants attempted to down the stormtalon with their brainleech devourers but could only strip a hull point and stun it. Cassius and co. finished off the remaining gaunt and consolidated towards the warriors. Ragnar survived with a single wound. 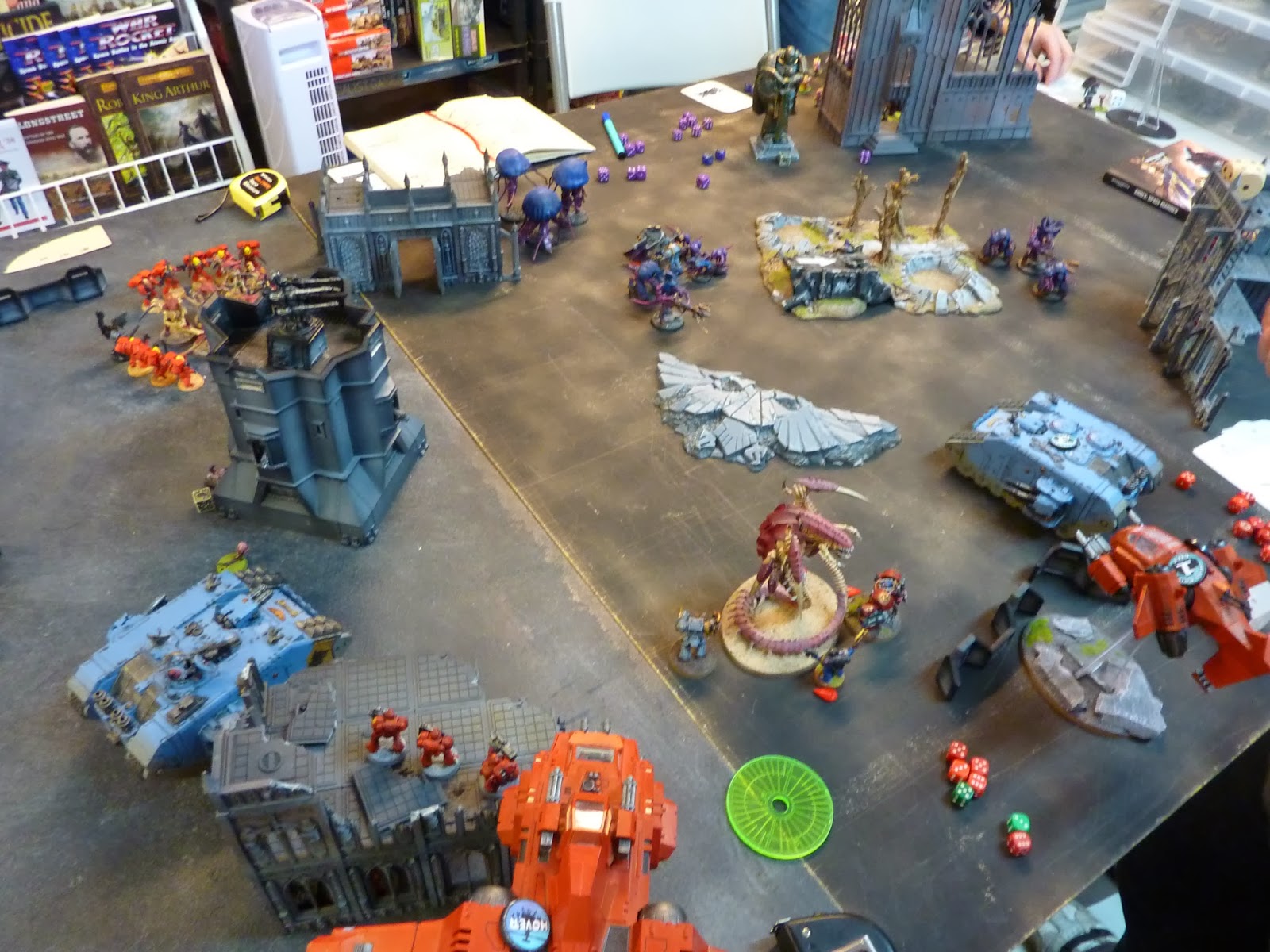 Turn 4
The lone wolf now charged into the mawloc and was able to finish it off where Tigurius had failed. The two assault combat squads, along with Cassius, charged into combat with the warriors. It was too late for Ragnar though who died to give our opponents Slay the Warlord. The warriors were heavily thinned out in return though. Matt and I now had a heated debate about whether to fire at the venomthropes or the tyrants. I still maintain we should've shot the venomthropes first but as with anything like that in 40K we'll never know. Either way the tyrant and his unit only took a couple of wounds from the flyers and land raiders. The lone wolf headed in the direction of the tyrant hoping to finish the job. Arjac and his terminators finally finished off the termagants even though we could've done with him staying in for just one more turn.

The tyranids had very little firepower left and the tyrants weren't likely to be able to charge anything. What they did have they used on Arjac and his remaining wolf guard (he'd lost 3 terminators to gaunts!). The champion was cut down easily but with the assault squads and Cassius now free of combat our final turn should be bloody. 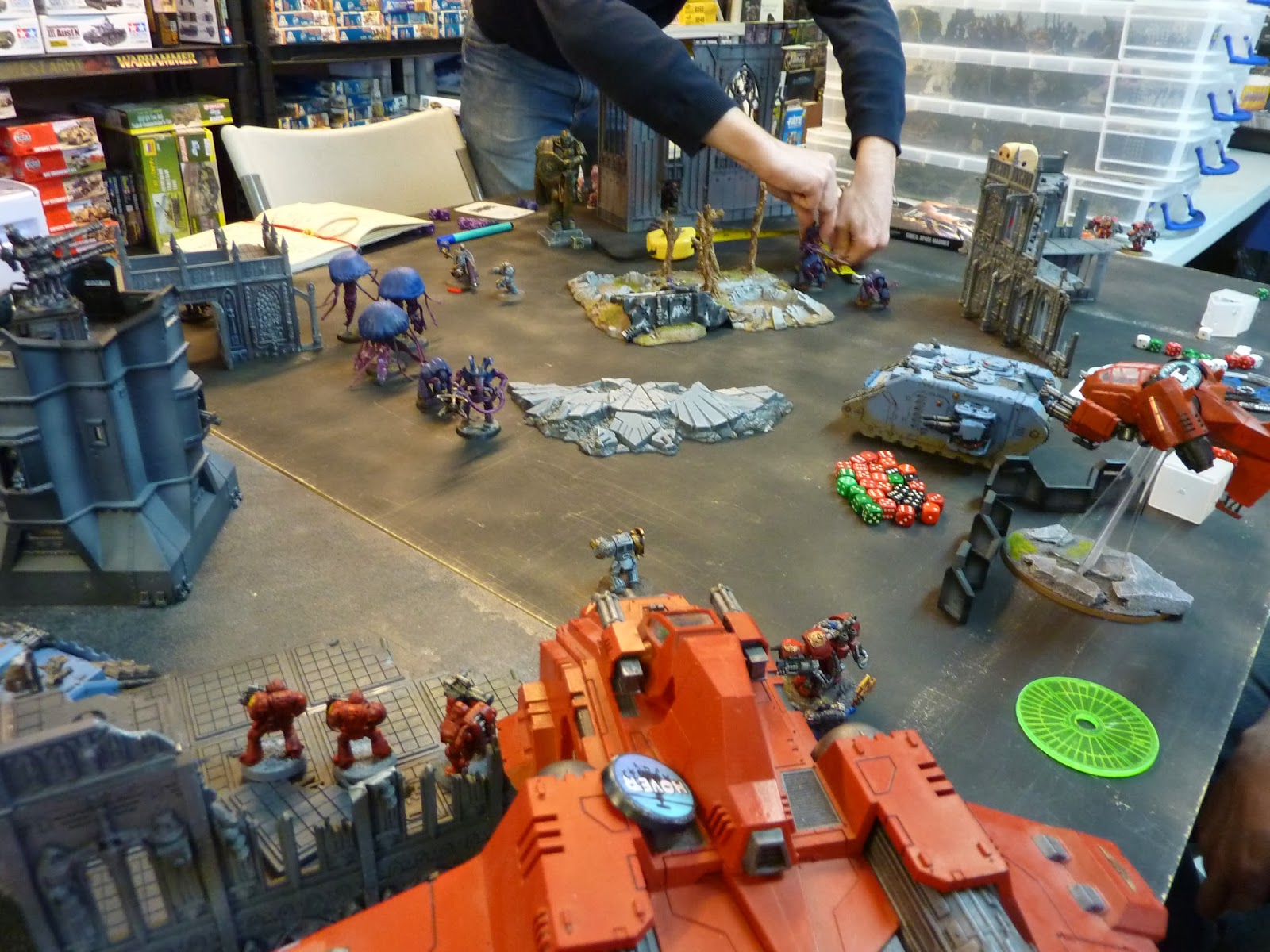 Turn 5
Cassius charged the nearest squad of biovores solo and was able to finish them off. The two assault squads charged into the venomthropes and wiped them out too. The lone wolf charged into combat with the tyrant. The tyrant caused 4 wounds, the lone wolf saved two on his shield and a third with FNP. This allowed him to down the tyrant (their second warlord) with his power fist and forever etch his name in the sagas. Meanwhile the two land raiders had moved onto objectives with one dropping off some grey hunters on another. With the one controlled by the tactical squad this gave us 4 of the 5 objectives meaning little chance for the tyranids to take the win.

One of the tyrants attempted to charge a land raider but rolled a triple 1 through terrain. The game ended here with one objective for the tyranids and four for the Imperium (plus first blood, linebreaker and 2x slay the warlord).

Conclusion
When we first saw the number of tyranids arrayed against us we weren't quite sure how we were going to deal with them with so few models of our own. Obviously the land raiders would be impossible for the tyranids to destroy with shooting (aside of warp lance) so as long as we kept them out of charge range we'd be safe. It's a shame really that it was Big Guns as it would've been a lot closer scoreline without it. I'm not sure Dan and Jamie realised that vehicles can score in big guns.

Stealing the initiative and killing a tervigon was undoubtedly a big deal and when the other tervigon corked we knew we'd had a lucky escape. Had the warriors been able to finish off Ragnar quicker then they'd have been able to charge the assault squad and the result would've probably been different. The flying MCs could've probably been used to bring down the land raiders earlier on but, again, I don't know they realised they were scoring or they'd have probably done this. The hive crone passing soo many grounding checks was a real hindrance early on although if we'd had our flyers on turn 2 it probably would've been dead sooner. It was frustrating when we couldn't get them even with Tigurius' re-roll! 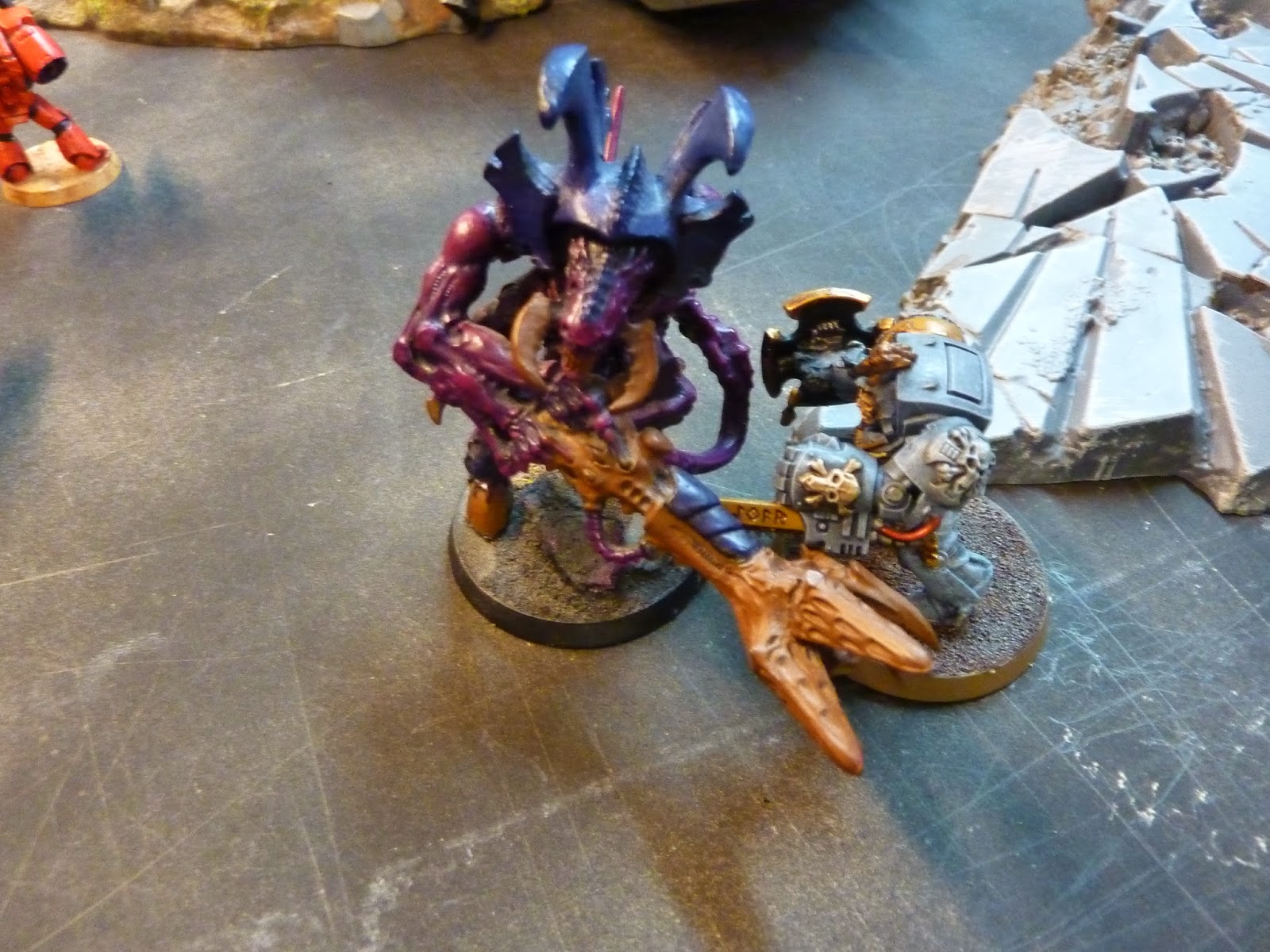 There's a couple of Tyranid units worth mentioning here. Firstly the warriors were actually pretty good. Obviously they're vulnerable to power fists in combat but a big enough squad with guns puts out a lot of fire and isn't easy to shift since they're always Fearless. Perhaps there are better ways to spend the points but I don't think they should be discounted. In smaller numbers I think they'd struggle though.

Secondly, biovores were great. This isn't really news as the interwebs are pretty impressed with them but being able to put out large pinning barrage blasts against massed troops is excellent. I'd say it's worth swapping a mawloc (or even two) for a squad and having 20pts to spare. They shone against marines so against kroot, fire warriors, guardians, cultists etc they'd be excellent.

Overall it was a thoroughly enjoyable game, my personal highlight being the lone wolf cutting down both a mawloc and a hive tyrant. We're going to play another round (with slightly altered teams) next month. It'll be Chaos vs. Angels of Death so keep an eye on the blog for that one. Right, now I've got no excuse not to finish my Tyranid reviews before getting to the small matter of a thing called Blog Wars 7.