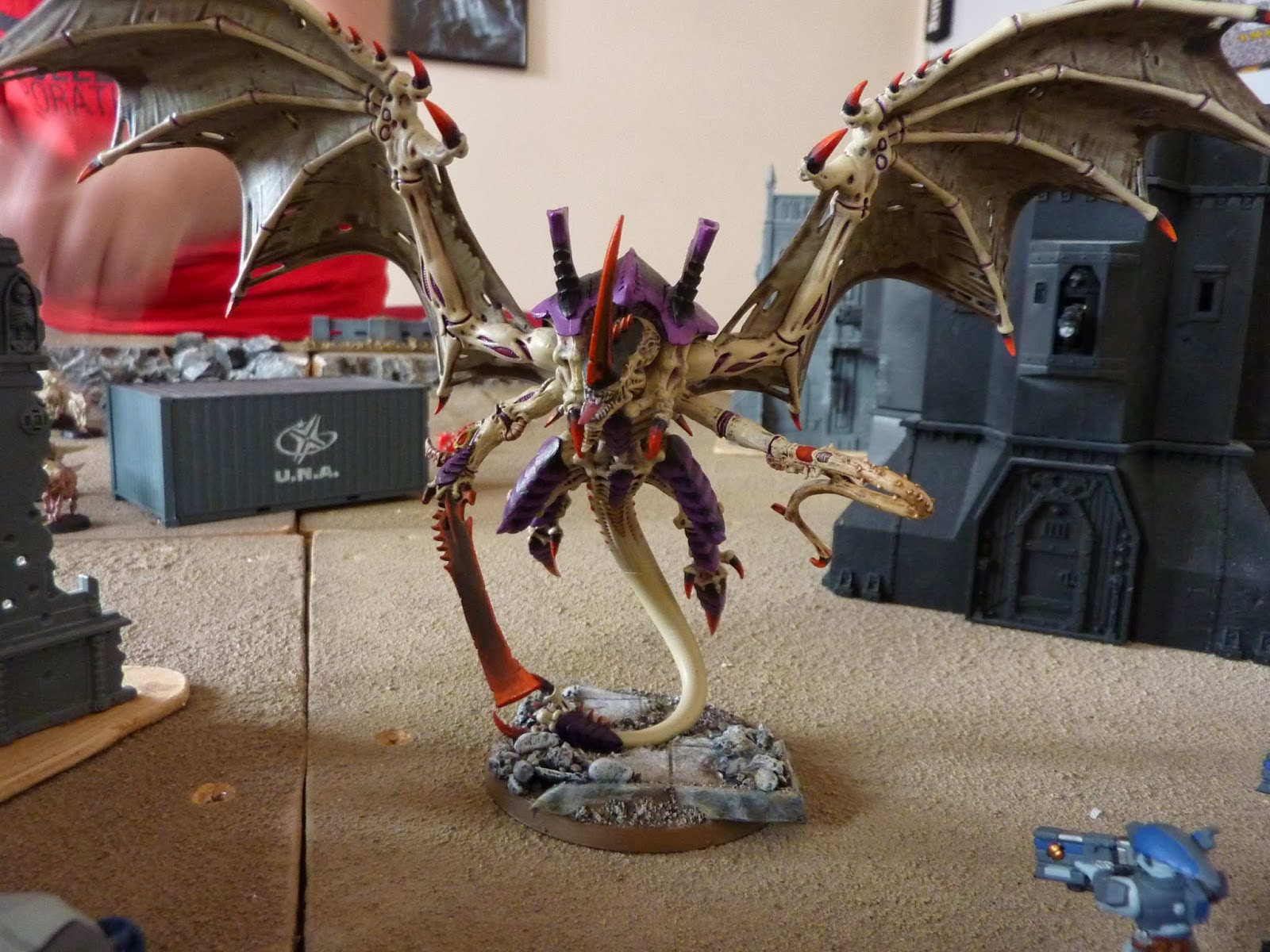 I hope you enjoyed Matt's report of his game against Scott's Tyranids. Today I'm going to talk about the game Scott and I had on Thursday. Scott was running pretty much the same list as he had against Matt (skip back to yesterday's post to check it out). I was running my mech Tau list that I've run in one form or another for a while now. Essentially, fire warriors in three devilfish with an ethereal, a missile crisis team, three squads of pathfinders, two riptides and a fusion plasma commander with similarly equipped bodyguard.

Pre-game
We rolled Relic with Dawn of War deployment. It'd be Night Fighting the first turn too. I rolled the warlord trait that prevents my commander from scattering when he deep strikes. Scott got the carnivorous jungle trait. His two tervigons took Dominion whilst the Hive Tyrants both got Paroxysm with one getting Warp Blast and the other getting Catalyst as their secondary powers. I won the deployment zone selection but Scott took first turn and I failed to Seize. 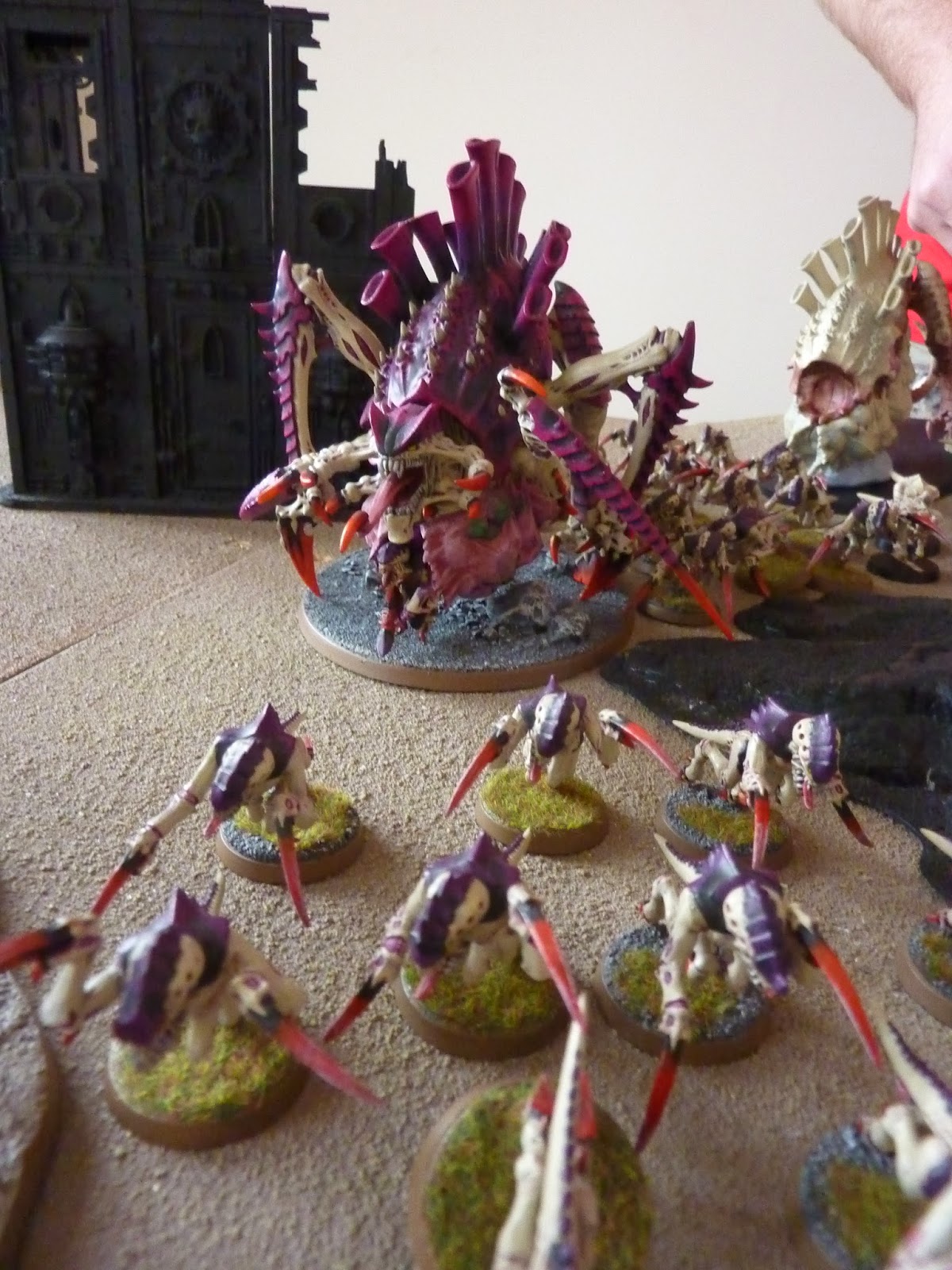 Turn 1
Scott moves all four FMCs right up into my face. With one of my pathfinder teams Scouting into a ruin in the centre they were a prime target for a vector strike from a tyrant. This was followed by devourer fire which finished off the squad and gave Scott the crucial First Blood. Otherwise the Tyranids did little damage to my Tau. One tervigon spawned 15 termagants but was corked. The other spawned 12 and there was more to come.

The drones from the devilfish were able to down one of the crones. Once on the ground the crone was no match for the missile team with markerlight support. All of the fire warriors had disembarked with the aim of helping the riptides deal with the other FMCs but both riptides failed miserably and all of the remaining FMCs stayed aloft. The next turn was going to be painful. 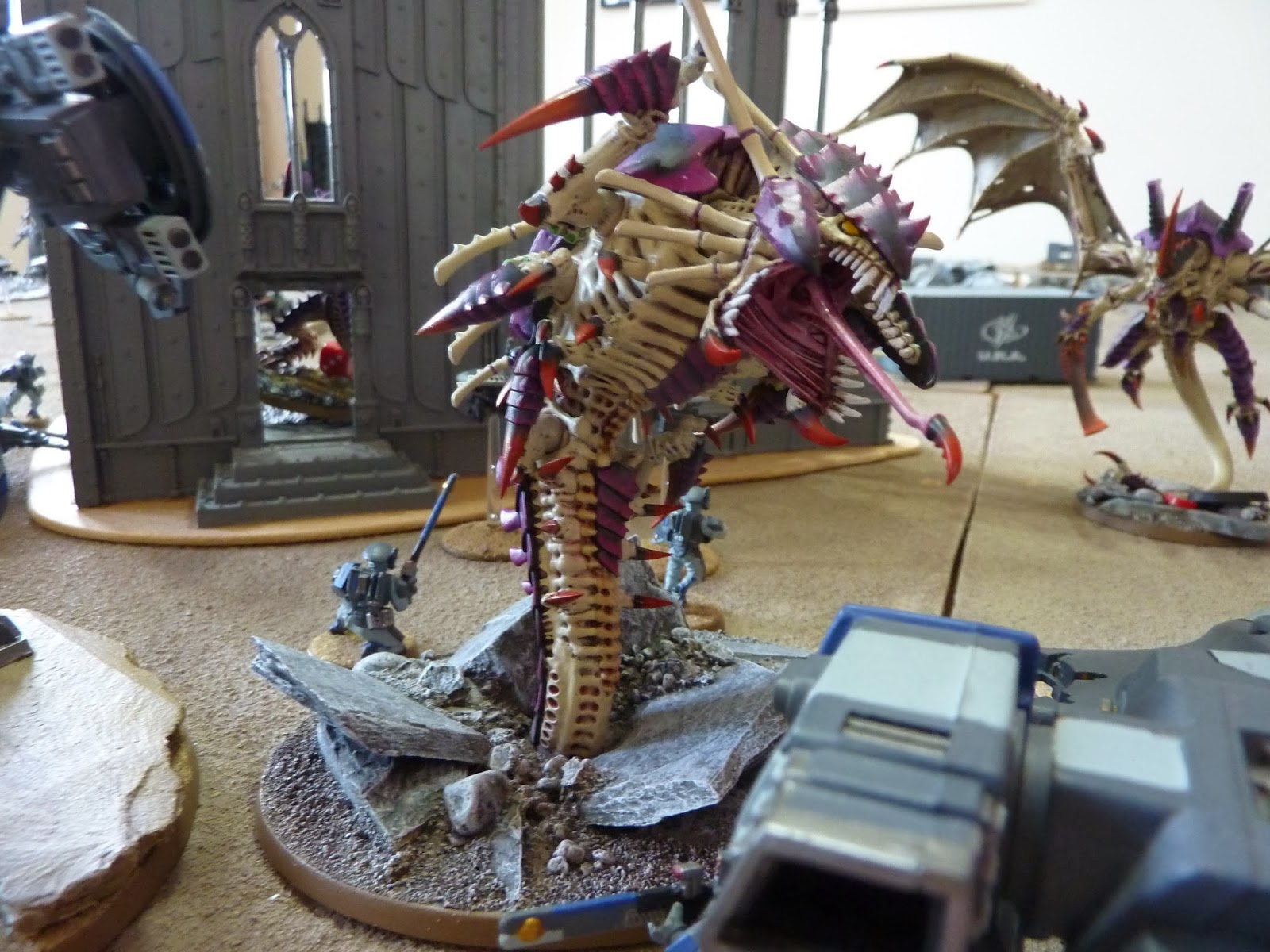 One of the mawlocs and the outflanking termagants arrived from reserves. The termagants came in on my right flank but there was nothing in range for them. The mawloc faired better killing 8 fire warriors with its Terror attack. The hive crone used its vector strike to finish off the squad before helping one of the tyrants to destroy the ethereal's devilfish. Meanwhile Scott rolled a perfect 6/5/4 roll for his active tervigon giving him a further 15 termagants. The other tyrant charged into combat with the riptide and used his bonesword to full effect by rolling a 6 to wound. Despite having nova'd for a 3++ save the riptide was cut in half by the tyrant. 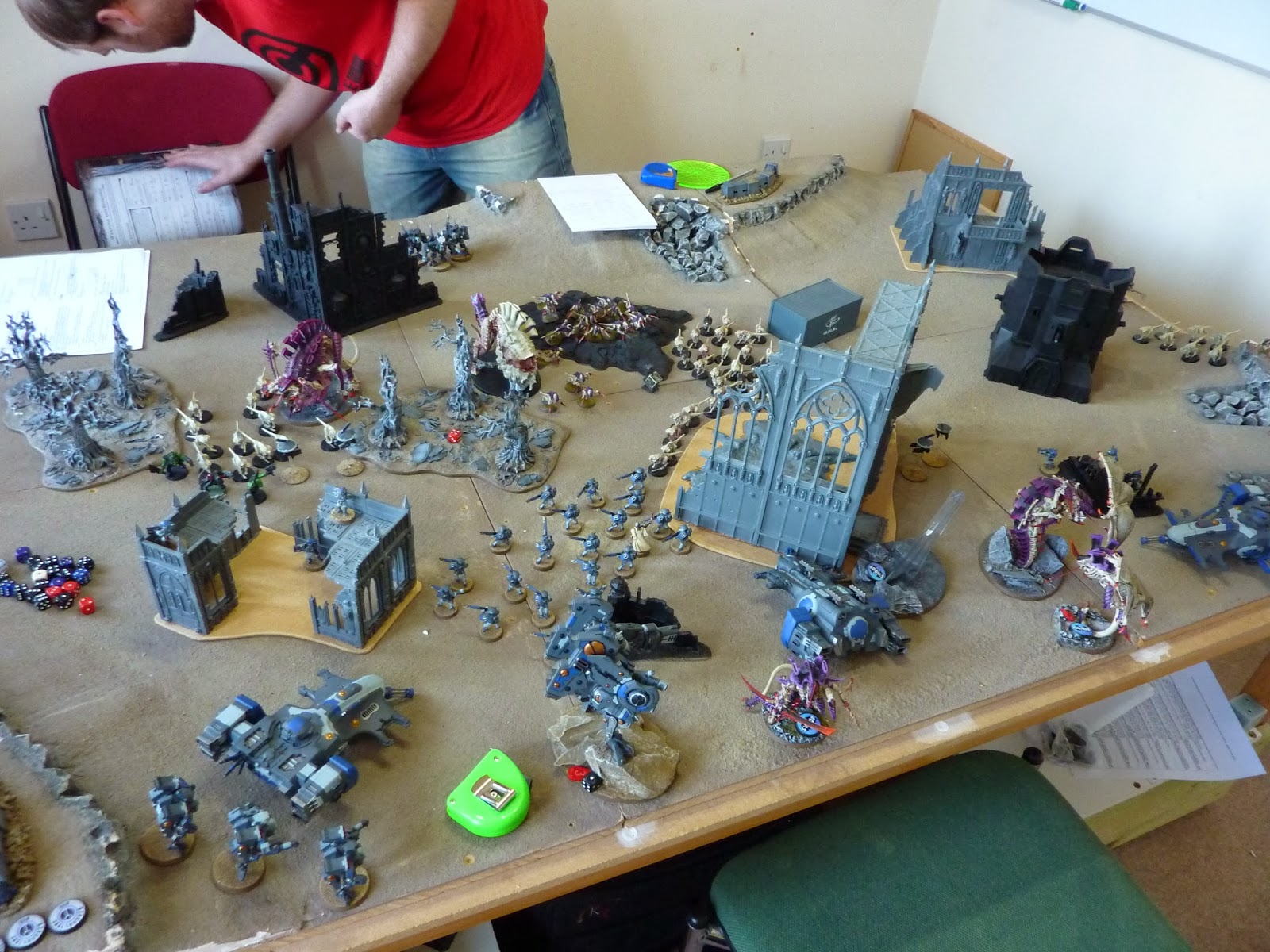 One of my kroot units arrived and cut into the outflanking termagants with their rifles. The commander and his bodyguard dropped in behind the tyranids. I'd hoped for marker support but the pathfinders failed to hit the mark with a single markerlight. Even so, the commander shot down the venomthrope whilst his squad managed to strip several wounds from the tervigon. I'd hoped they'd be able to kill the tervigon outright and cause a synaptic backlash but now I needed to use the fire warriors to finish the job instead of gunning down some gaunts. The tervigon managed to survive the fire warriors' volley with a single wound but I spotted a couple of drones I'd not fired who were lucky enough to finish the job. The tervigon perished taking something like 12 termagants with him. The crisis team killed off another hive crone with ease. The riptide managed to finish off the bonesword tyrant but needed help from the pathfinders thanks to the effects of paroxysm. 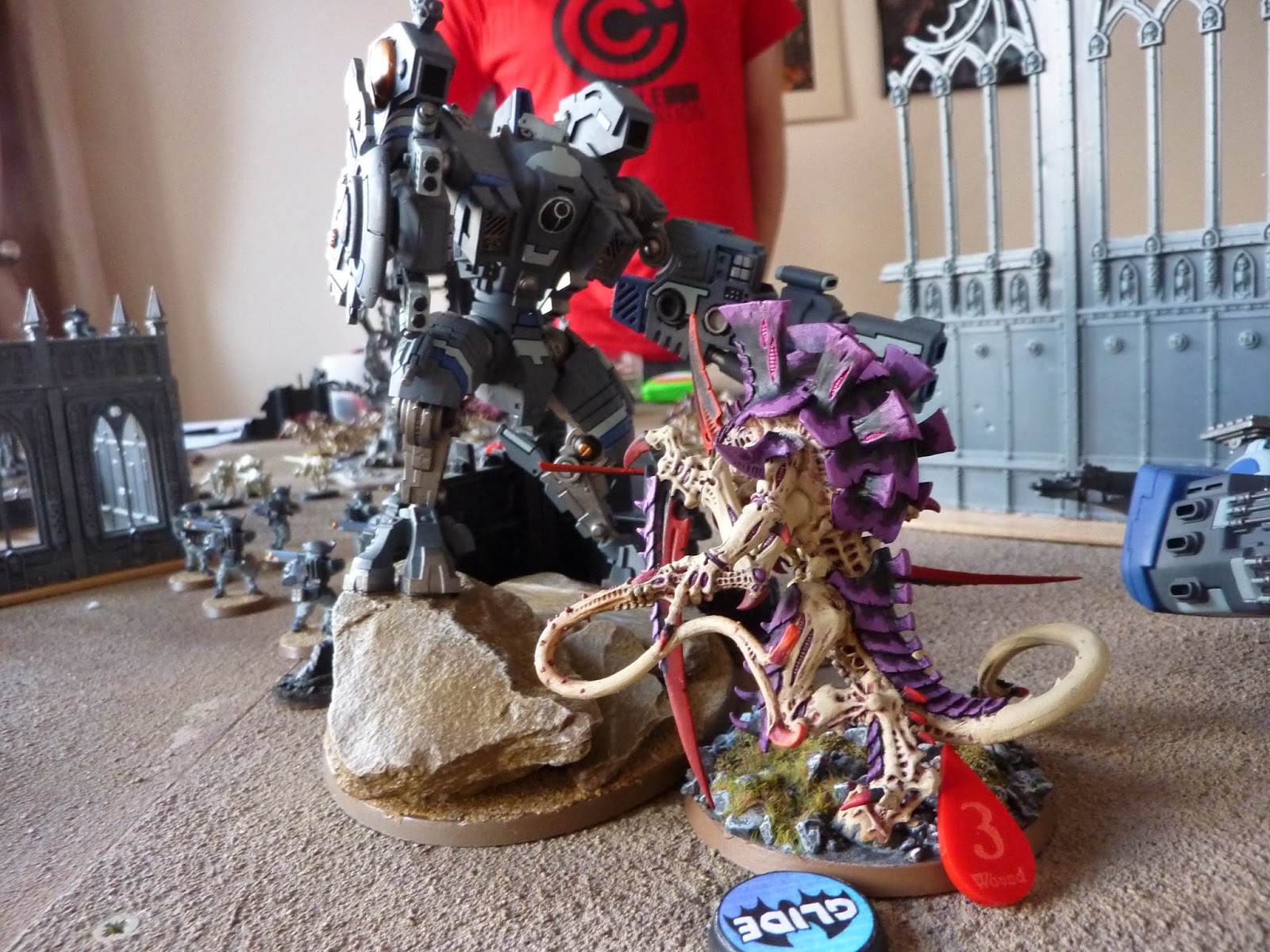 Turn 3
The termagants in the centre claimed vengeance for their fallen mother by charging into the fire warriors and cutting down a whole squad plus the ethereal. The remaining tyrant charged the remaining riptide but could only take him down to one wound. The tervigon spawned another 12 gaunts but still wasn't finished! He then charged the commander and his unit but fluffed his attacks and took a wound in return. One mawloc burrowed whilst the other remained in reserve. The outflanking guants failed their instinctive behaviour and had to run towards cover. 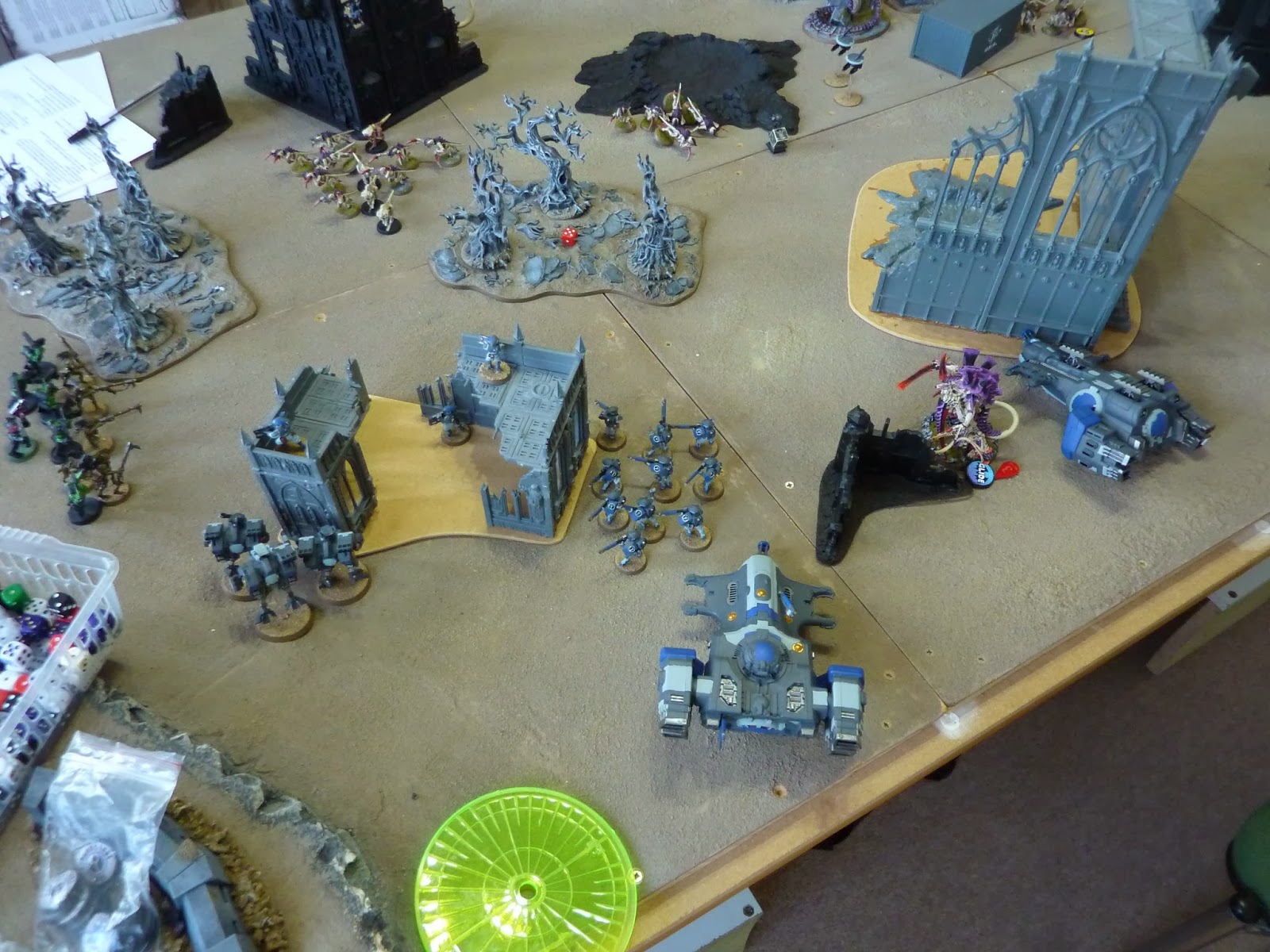 With both of the remaining MCs in combat there were only gaunts to shoot at. More kroot arrived and killed off a small unit of gaunts. The remaining fire warriors and missile team killed off the big squad of gaunts. The other kroot killed off more gaunts from the outflanking squad and forced them to flee. The riptide was cut down by the tyrant in combat.

Turn 4
One mawloc arrived safely and took out all but two of the remaining fire warriors. The other tried to target the kroot on my right flank but mishapped and ended up misplaced safely in the back corner. Despite being busy in combat the tervigon spawned another 8 gaunts whilst killing a bodyguard. The tyrant vector struck the missile team killing two and finishing the third with his devourers. The termagants gradually moved towards the relic to claim it. 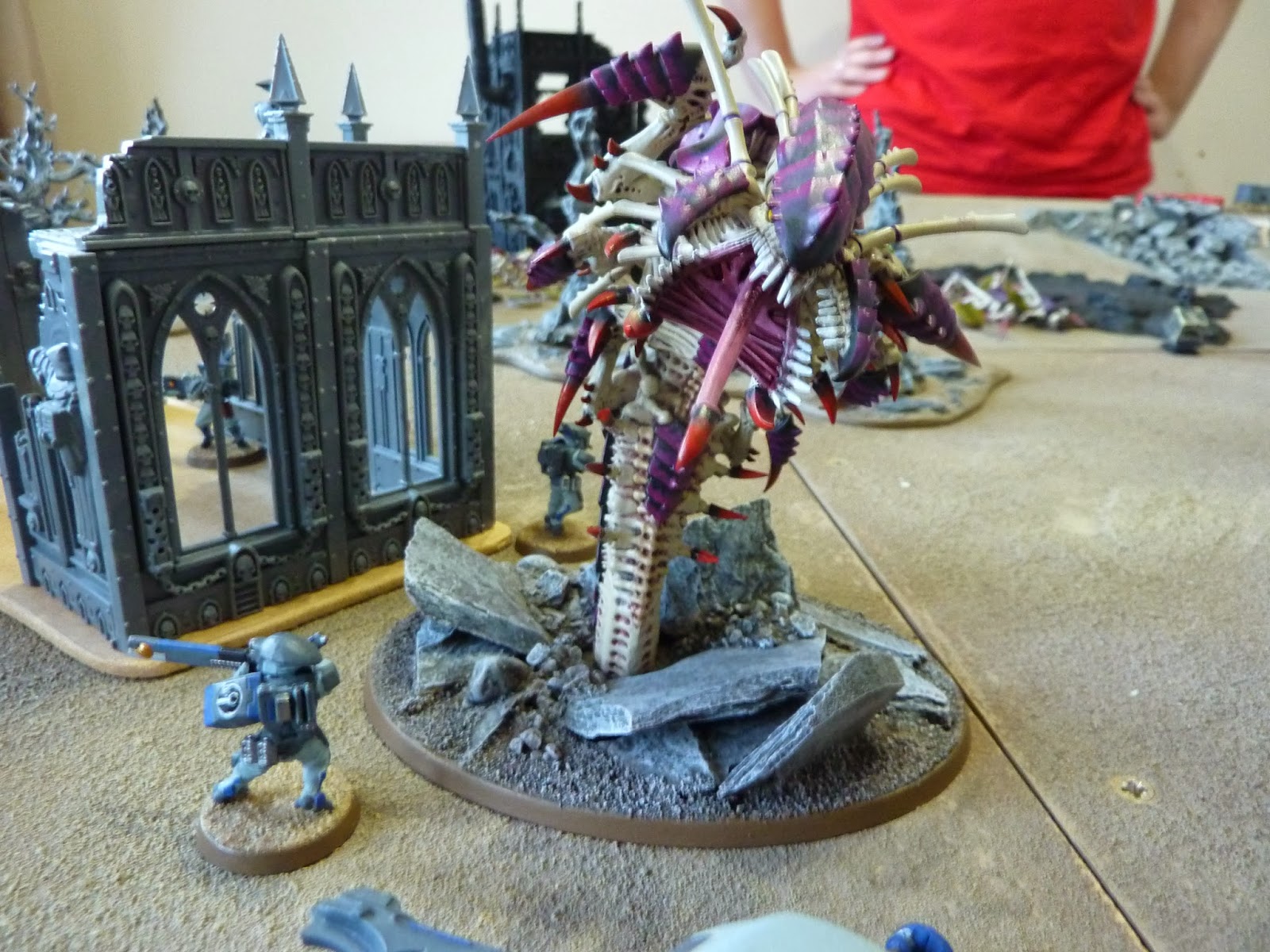 The two remaining fire warriors hopped into the devilfish to hopefully claim the objective if I could some how clear it or at least contest it. I was pretty much out of firepower though and the kroot needed to run to try and make it to the relic should they be required.

Turn 5
The mawloc charged into the devilfish, blew it up and killed both fire warriors inside! The tervigon finished off the commander and his bodyguard whilst spawning another 8 gaunts. That gave Scott 4 VPs (First Blood, ethereal, Linebreaker and Slay the Warlord) to my single VP (Slay the Warlord). That meant the game was pretty much over unless I could get both linebreaker and the relic somehow with all those gaunts, two mawlocs and a tyrant around.

There was little left for me to do but run the kroot in a vain hope of grabbing the relic. The pathfinders tried to kill the tyrant with their carbines but failed.

Turn 6 & 7
I'd pretty much conceded anyway but we got turn 6 and 7 so played them just to see how much damage the tyranids could do to my remaining kroot and pathfinders. The tyrant finished off one pathfinder unit whilst the mawloc re-emerged and killed off the kroot. In the end I was left with 4 pathfinders and a devilfish.

Oh and the remaining tervigon went on to spawn 12 gaunts in turn 6 and finally in turn 7 Scott rolled a triple 5 to create a final 15 termagants! That meant the tervigon spawned a total of 78 gaunts over the 7 turns!

Conclusion
The tervigon was undoubtedly the winner here. Obviously the hive tyrants and mawlocs did their jobs but ultimately it was an objective game and the relic never looked in danger. The mission certainly played into the tyranids' hands (or claws) but any of the objective missions would've probably had the same result with so many guants! Now I'm not going to pretend that I'd expect the tervigons to do so well in every game but clearly they have that potential and despite the points cost they're still worthwhile. They can of course move before they spawn their termagants too which means you can get them a bit further forward. 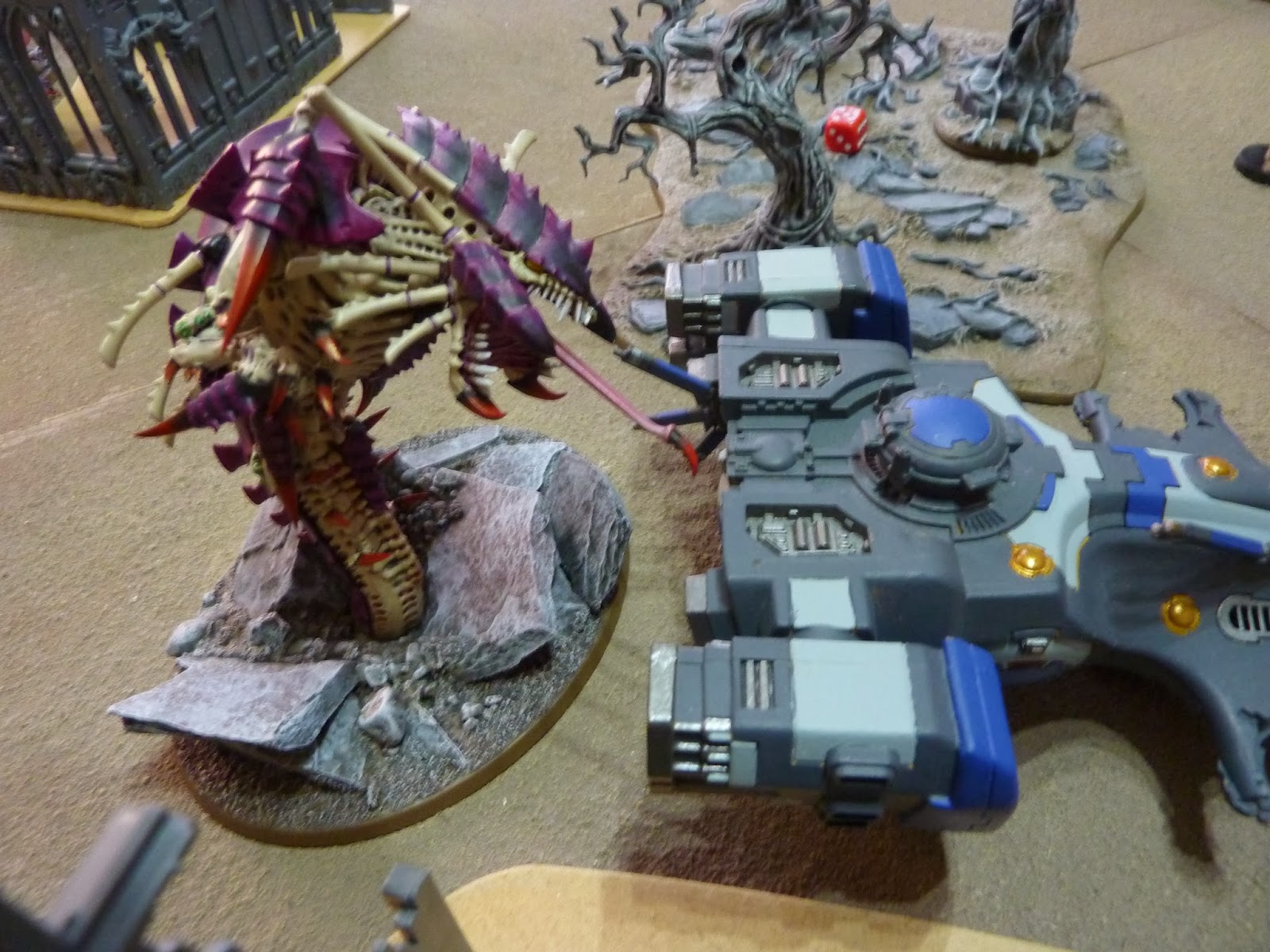 There were several things I should've done differently or could've gone my way. If the pathfinders had lit up the tervigon then my suits probably would've killed him without help from the fire warriors and drones. That would've freed up the fire warriors to kill gaunts and probably saved their own lives along with the ethereal. I was complacent with the commander and his team too. There's no way I should've put them so close to the tervigon and allowed it to charge. That would've kept them alive too and probably allowed them to kill the other tervigon instead.

Finally there was one tactical play I could've made that I missed. In my turn the riptide was in combat with the tyrant and had a single wound left. If I'd rolled for nova I'd have either failed it and killed him allowing me to shoot the tyrant or else keep him locked with a 3++ save perhaps. Either way it would've stalled the tyrant and saved the crisis team for another turn. There's always things that could've gone differently though and I don't want to take anything away from Scott who played well and punished my mistakes.

Between the two tervigons there were 93 bonus gaunts. Not only is that a scary amount for an opposing army but Scott was lucky he even had enough models! I can't believe it didn't cork itself until turn 7. It's pretty incredible luck on Scott's part but still, as I say, there's always that possibilty with tervigons. Sure they're more expensive and not as good as before but they're still great in objective games when they don't cork early. Dominion is a must for them though to keep the gaunts under control.

That list contains 4 FMCs and 4 MCs. Some armies literally can't deal with that many monsters. Of course broadside spam, farsight bomb, etc wouldn't struggle but name me an army that can reliably beat them? I think that's part of the problem with the Tyranid book. Eldar and Tau are so strong right now that they're the yard stick for any new book. Frankly a mostly combat army was never going to have a hope against the kind of power the top lists can come out. I, for one, didn't want to see Tyranids reduced to another shooty army so they're always going to struggle in that environment.

It's worth remembering that although on paper the tervigons and mawlocs aren't amazing in combat, they're still MCs. That means Hammer of Wrath and Smash which aren't to be sniffed at. They've got anti-vehicle utility and as the tervigon proved they can insta-kill stuff easily enough. If there aren't power weapons around their T6, six wounds and 3+ save should keep them alive in combat for sufficient time to get something else in to rescue them if they can't handle it themselves.

I'll be writing up my Synapse post soon I promise but I wanted to get this battle report done whilst it was still fresh in my mind. I'm playing another game against tyranids on Sunday when Matt and I team up in a 3,500pt (2x1750) doubles game with Jamie and Dan. We'll be running marines and wolves against the horde and there'll be a report on the game of course. Once that's done I'll write my final verdict on the new book so that I'm actually basing it on experience instead of pure theory.
Posted by From The Fang at 17:00:00