From the Fang - The Next Generation 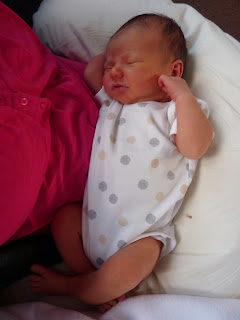 Sorry things have been a bit quiet on the blog recently but here's the reason:

His name is Arthur and he was born on December 5th at 16.25, weighing 8lb 5oz. He's our first child and as such we're still getting the hang of things. Hopefully over the next couple of weeks that I'm on paternity leave I'll be finding more time to blog and perhaps even get some hobby time.

Matt is hopefully coming over on Friday for a couple of games of X-wing so I'll try and post up some battle reports for those who are considering getting the set for Christmas. I've slowly been collecting all the rebel models (except the Y-wing) and Matt is picking up the Imperial ones. I've also bought the TIE fighter expansion though so that I've got some options if I want to play someone other than Matt. Once I get a feel for what's good I'll probably get a few more Imperial ships and I expect Matt will get the odd Rebel one.

I'm hoping that we manage to keep our games of X-wing nice and casual. I'd like it to remain a "beer and pretzels" affair and I have no intention of heading to tournaments. I'll be writing a bit about the current state of 40K in the next couple of days but suffice to say I think entering the tournament scene has dramatically affected the way we play our "casual" games. I'd love to return to the themed/narrative kind of play but it's very difficult to go back once you head down the competitive road.

Anyway, here's hoping Arthur will grow up to be as big of a geek as I am and that I can enjoy teaching him how to play some of my favourite war games. Who knows what edition of 40K we'll be on by then and how much GW will be charging for the models! Perhaps I should start saving now in case he wants his own army....
Posted by From The Fang at 15:26:00