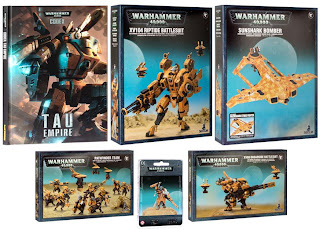 We already knew they were coming but now GW has finally announced them. The new Tau models are available for pre-order on the GW website. The riptide looks awesome and the flyer is growing on me but I just can't get on with the new commander model. He looks too scrawny and flimsy somehow. I can see what they were aiming for with him but I just don't think they've pulled it off. I'll be sticking to conversions from the standard XV8 kit I think.

Here's the FOC breakdown as it appears on the GW site. Bear in mind they sometimes get it wrong before release and that this doesn't take into account things that can move slots.

The HQ options will be interesting. obviously Shadowsun/Farsight are essentially unique commanders but the question is how does Darkstrider and the Cadre Fireblade come into it? I was hoping they'd be upgrades for their respective squads (Pathfinders and FWs) but it seems they're an HQ choice instead. Perhaps the fireblades will be like a Necron court/wolf guard/sanguinary priests where you can take several and split them. Alternatively they could be like the DA techmarine in that he doesn't really use and FOC slot. Also in here are the Ethereals and Aun'va is still around. I'm interested to see what these guys can do because they'll likely be cheaper than a normal commander. That's assuming of course that they get rid of the 1+ on the commanders but I'm sure they will.

Elites aren't packed with options but all three would be nice to have. Depends on what they do with stealth suits. I don't currently own any as they were so useless in 5th but it's interesting that you can still buy XV15 and XV25 variants. Perhaps they'll be doing something whereby the XV25 is an upgrade. Otherwise it's presumably going to be a riptide and a couple of crisis teams. I'm hoping there'll be some FOC movements so that crisis/stealth suits can become troops with Farsight/Shadowsun perhaps.

Troops remain the same as they were before. As I say, the question is rather what will be able to move into the Troops section. So far GW have been keeping this mechanic alive in their new codexes so I'd be surprised if they didn't will Tau. It's a shame kroot don't seem to have gotten any more options though.

Fast attack is the most obviously crowded section of the chart. I can't imagine there'll be room for more than one of the flyers in a sub 2,000 pts list but depending on what they do with the other Fast Attack units it could be really tricky to spend the points here. Gun drone squadrons could be interesting now if you can take some of the other drone types with them and piranhas are a bit of an unknown quantity at the moment. I suspect they'll stay pretty similar though. Hopefully Vespids will be more useful too. It's going to be tricky to choose I think.

Heavy support is always going to be a struggle between broadsides and hammerheads. Even with Longstrike they're going to have to do something special with the Hammerhead to make me take one over my broadsides. I'd be easily tempted into a skyray though since I've always liked the model. Sniper drone teams are still here but I'd be surprised if I was persuaded to buy any. They're still going to be too low a model count to be very useful and just can't compete with the other Heavy choices.

So there you have it. I'm sure Faeit212 will be bringing us someone who's got the codex pretty soon but its at this stage that I try to avoid listening to rumours as there's too much opportunity for people to make stuff up. If you look back at the rumours before the last couple of books you can see that some of it is plain made up and others are just people mis-reading the book. Only a week to go!!
Posted by From The Fang at 09:06:00