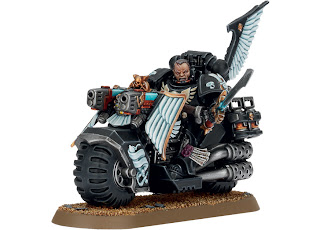 I've been toying around with a few things since I first put a list together. What I have now is a streamlined and deadly list that should be pretty effective. I'm still not doing great with the painting but hopefully that'll pick up over the next couple of weeks. Here's what I'm playing with at the moment followed by some detailed analysis of the lot:

Very similar to what I had before. The main difference here is the doubling up of the Black Knights. I'm still a massive fan of these guys as they're extremely versatile and can be deadly against the right opponents. Previously I had Sammael joining the RW command squad to keep them alive but I'm now playing it with Sammael and the Libby taking a pack of Knights each. This gives me two devastating units. Both having skilled rider is nice so that you can move them through terrain without worrying. There aren't many units that wouldn't worry about these guys. Both units are difficult to ignore and should hopefully distract attention away from the bulk of the army which is churning out salvo shots.

The librarian has ditched his over upgrades in favour of mastery level 2. This gives me access to the Telepathy powers which need 2 warp charge to activate. If I get a good roll they can get Hallucination or Invisibility, both of which are awesome. The primaris power, psychic shriek, isn't too bad either, if a little situational. Having him around for challenges is decent too if he can make use of his force weapon.

Both the command squad and the darkshroud are the obvious targets for my opponents but can be pretty tricky to kill. Getting first turn is pretty essential and its a shame there's no characters with roll manipulation (e.g. +1 or re-roll). Should I go first, the whole of my army can move. This gives my normal bikes a 3+/4++ whilst still firing off there ridiculous amounts of bolter shots. The black knights get 3+/3++ as they'll likely turbo-boost turn 1 to get into effective range nice and early.

The command squad can get 3+/2++ thanks to the Darkshroud. They get a 5++ jink which is made 4++ by turbo-boosting, 3++ from skilled rider and then Stealth makes it 2++. That's ignoring the FNP from the Apothecary too! This makes both units pretty tricky to take down and either my opponent will expend plenty of shots trying or else ignore them and shoot my bikes instead. Later on the command squad can be firing off the plasma and grenade launcher and still claiming 3+/3++.

The tactical squad might seem a bit useless but I'm working on the principle that they'll get ignored whilst they hug and objective and fire away with the plasma cannon. The same points could be spent on more bikes but frankly I don't have any and I'm loathe to buy any more. It becomes difficult to get them all in range of the shroud/banner too. I'm not going to pretend the tacticals are a great choice but as I say, if my opponent is shooting them then I'm pretty happy or I'm already screwed.

I had thought about making the attack squadrons with 2 meltas in one and 2 plasmas in the other. The problem I have with that is that if I meet high armour values e.g. land raiders then all my eggs are in one basket. The issue I have is in deciding when to fire the bolters and when to fire the special weapons when firing at infantry. It's pretty much always better to fire them over the melta but at half range the plasma gun is better against some targets. Essentially if the target is getting a 4+ or better cover/invuln save then the bolters are a better option than a 2 shot plasma. Most of the time I'll hopefully be at above 12" range so I'm going with bolters for the most part.

I find it tricky to deploy everything in a nice blob around the banner/shroud but it's easy to forget you can move the whole lot 12" pretty easily. Terrain is an issue most of the time but it can be avoided. If anything you want to pick the side of the board with little terrain to make your life easier!

Possible Changes
I'd considered taking out all of the special weapons as I'm mostly using the bolter banner but if I come up against mechanised armies then I'll struggle without them. I had thought about attack bikes instead but they feel like easy kills for my opponent and are one-shot wonders most of the time.

I've already mentioned that swapping out the tactical squad would be an option. It's a shame the flyer isn't better as I'd try to squeeze it in if it was even half decent.

There are probably too many points sunk into the command squad but for how crucial they are to the battle plan it seems daft not to give them the apothecary. Granted the champion isn't necessary but he isn't bad in combat thanks to WS5 it's just a shame his sword is unwieldy. Essentially those 5pts are so I can take a cool model!

Grenade launchers are a bit of an unknown at the moment. Part of me thinks it's best to have 2 per black knight squad so that you can keep at least one alive most of the time but I also think it might be better to have the plasma talons. I'd certainly want one launcher per unit but not really sure about the second. Being able to hit a unit with rad and stasis before charging in appeals though.

Generally, apart from swapping the tacticals for more bikers, I don't think there's much more optimising to be done with this list. As a side note, I do think the existence of the bolter banner is a bit of a shame. It makes what could be a fast and deadly bike army into a blob that just moves a little bit to keep it's cover save. Not much fun really.
Posted by From The Fang at 13:57:00