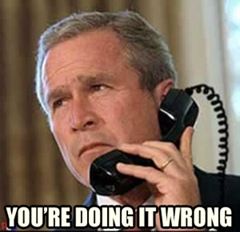 We've all done it. When you play a game with your mates you either both assume a rule stayed the same in 6th or else one of you is sure you've read it and the other doesn't question it. Not such a big deal in friendly games but can lead to problems at tournaments. You end up making your battle plans based on those assumed rules and it's only when you execute your strategy that your opponent goes "hang on, you can't do that". This is partly why I like going to tournaments. I can't remember a time when I got through an entire tournament without having to look something up.

One point that's worth making here is that some things are FAQ'd and people aren't up-to-date with them. Keeping abreast of the rules is key to tournament play. Before any tournament I always read through the latest FAQs of the rulebook and my army's codex. I also do my best to keep an eye on all the other FAQs, which comes in handy when I referee at Blog Wars. Anyway, here's a list of rules you might be doing wrong. I'm hoping to make this a regular segment so feel free to send in any you've come across. Remember, I'm not saying everyone else is doing it wrong and I'm not. As ever if you think I've got something wrong then please tell me.

Characters are huge in 6th edition 40K. I don't think people are actually making them as significant as they ought to be either. Every army has characters in there somewhere. Here's a few things that I think people (myself included) are doing wrong when it comes to using characters.

Knowing They Even Exist
Whilst the new codexes (CSM, DA and now Daemons) will list out all the units and whether they're characters or not, the old ones still rely on the summary in the back of the rulebook. Take some time now to actually look at your army and see what characters you have.

Most of the time it's pretty intuitive. We'd expect squad leaders (e.g. Exarches, Nobs, Wolf Guard, Sergeants) to be characters but there are some surprises too. For example, at the recent doubles we took great pleasure in pointing out that Dreadknights are characters and hence they can challenge out some of those enemy characters and kick their teeth in. Similarly Lone Wolves, Daemon Princes, Warlocks, Wraithlords, etc are all characters so make the most of them.

Precision Shots/Strikes
I'm as guilty of this as anyone but how often do you remember to use your Precision Shots? It just isn't part of the routine yet and I don't find myself rolling different coloured dice. Even if the character has different WS/BS and I do roll different colour dice, I often don't pay any attention to the 6s I roll. This is a HUGE mechanic in 6th edition and I think it's probably the most underused.

Think of the numerous situations where a Precision Shot could change the entire game. Taking out an apothecary to remove FNP or killing a sergeant to lower the leadership of a unit. Now these types of shots can be countered with Look Out Sir! rolls (more on them in a bit) but there are other significant examples such as killing the guy with a special weapon such as a power fist, meltagun etc or how about the guy with a banner. Your opponent can't stop you killing things that aren't characters themselves. If you aren't using the Precision Shot you're letting your opponent decide when to remove that model. Combine the precision shot with a special weapon of your own and it can be really deadly.

Precision Strikes are also overlooked a lot. Now if you're getting into challenges then they aren't going to make a difference but once you win the challenge do you remember to keep track of them again? Anyway, I don't want to go down the route of tactics as that's more of a subject for a different post but the point is if you aren't using Precision Shots/Strikes you aren't getting the most from your army.

Challenges
Challenges can change the course of the combat in a big way but people often forget to issue them at all.  Don't forget that although the charging player gets to challenge first, you can still issue one if they don't. When you've been issued a challenge remember you don't have to accept it with the character it was directed at. In fact challenges shouldn't technically be directed at anyone. If you have a flimsy but useful Independent Character in your squad then maybe a sergeant would be better accepting the challenge, leaving the IC safe and able to assault the rest of the unit.

Another thing that's often done wrong is that if you choose to refuse a challenge (and often it's the best call even if it feels cowardly) with a character, they can't strike but can still be struck if they're the last guy left or you simply want to put attacks on them. However, "spare" wounds left after a challenger is slain can't then be applied to models which weren't part of the challenge and similarly "spare" wounds from the rest of the combat can't be put on the challengers.

Moral Support gets forgotten about a lot and is key when you're fighting a single enemy model. If you've got bystanders it's worth checking if you get a re-roll because that could keep your character alive or help him kill his opponent.

Look Out Sir!
Most people have got used to this mechanic now but there are still some that are forgetting to do it. Sometimes it's better not to of course but most of the time a character has something about him worth saving! The key thing here is that LOS got FAQ'd fairly early on to clear up the confusion that the wording of the rule had created.

The model making the LOS attempt must be the closest model to the character. You can't just pick a random model in 6" to take the hit. Also, the attempt must be made when the wound is allocated to the model and not once you've failed the saving throw and panicked! I'll cover wound allocation in another post and talk about LOS more then as this is something a lot of people seem to be doing wrong or are making more complicated than necessary.

Independent Characters
Most things about ICs have stayed the same in the transition to 6th edition but there are a couple of minor things. Firstly, a lot of the Special Rules have a line which says "if one or models in a unit has this rule" which means, for example, that Fearless characters now make a whole unit Fearless automatically.

Just like in 5th, ICs can only join/leave units in the Movement Phase. I'm always amazed at how often people think they can do so in the Assault Phase.

The only other thing that springs to mind is Heroic Morale whereby units that contain an Independent Character can regroup on normal Leadership even if they've dropped below 25%. Might help prevent your IC from running off the board (if you aren't lucky enough to have ATSKNF anyway!).

Conclusion
Most of this stuff people know about but simply forget. I'm definitely guilty of forgetting Precision Shots about 99% of the time. When I do remember I seem to fail to wound anyway!! I have no idea how to make myself start remembering but I know I'll do better if I do. It's a question of making it part of the routine when rolling to hit.

Characters are a big part of 6th edition and, as I've said, I think their potential is being wasted by most players.
Posted by From The Fang at 20:56:00