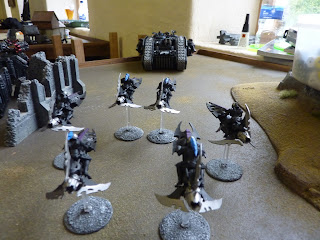 Having played a fair few games in 6th edition now (and most of them with my Dark Eldar). I'm pretty pleased with the way they've turned out. Some things are crappy sure but on the whole I think they got better. The most noticable case of this is with Reavers, allow me to explain why they're my new favourite thing in 6th.

One thing I've only recently realised is that provided they move the reavers now have a permanent 4+ cover save thanks to a combination of Jink and Skilled Rider. As I've previously mentioned this is boosted to 3+ when Turbo Boosting. Having used their Bladevanes a lot in the new edition I find the 12" then 36" move to be pretty brutal. The problem with Bladevanes in 5th was that it nearly always left your Reavers exposed. The 12" positioning move means you can get a better angle and keep your distance. In later turns the move allows you to zip along the back of your opponents line and then turbo-boost back to the safety of your deployment zone.

As in 5th, I find it difficult to get these guys a pain token sometimes. Larger squads can put out a lot more bladevane attacks which means a better chance of wiping out a squad for that pain token. However, another use of that 12" positioning move is to attempt to "snipe". With wound allocation from the closest model to their start position you can now get round the back of units and pick off models that were trying to hide at the rear. Doing this to an independent character is a good way of getting them a pain token and keeping them alive in the subsequent turn. It takes a bit of practice and planning but the advantage is that it gives your opponent a lot to think about when deploying and moving his units.

Now potentially you could give them some Cluster Caltrops to boost their effectiveness when sweeping but frankly they're just too expensive. It's very easy to get your reavers into a tight spot and then that's 40 extra points down the pan on a 6-man unit. On the other hand, I think it's reasonable to give the squad a couple of heat lances. If you find yourself near a vehicle you can usually make a mess of it with the lances then charge the occupants. Reavers aren't stunning in combat mind you with only a 5+ save (plus FNP perhaps) but they do get a reasonable number of attacks and with decent combat drugs (or Furious Charge from pain) they can make short work of T3 units and maybe smaller MEQ units.

Of course, most of the time you're better keeping them turbo-boosting as long as possible. Later on the game they can either be contesting objectives. In the late turns they can use their move/boost to bladevane controlling units whilst still staying in range to contest. In the Scouring mission they can also score of course.

If nothing else they're a unit that is constantly in your opponent's face that he'll find it difficult to ignore. Bear in mind though that early on in the game they might be the only unit that he can shoot (especially in Night Fighting) so it's sometimes wiser to keep them back.

With out a doubt their main weakness is to template weapons. Even the humble flamer can wipe out a squad with lucky rolls. Against some armies it's pretty easy to keep them clear of flamers but some builds are packed with them. Let's face it though, the entire DE army is vulnerable to template weapons so this should hardly come as a shock. In general the reavers' incredible speed should mean you can keep them at a distance as long as possible. With pre-measuring it should be easy to keep them above 18" away and therefore clear of rapid firing and templates.

My standard load-out for these guys is a straightforward 6-man unit with 2 lances coming in at 156pts. It's pretty easy to get a couple of these in 1750/1850 point lists. They can then either take a flank each (minimising the fire on a squad) or stick together to double sweep units for maximum effect.

Since I'm hopefully taking my Dark Eldar to the doubles in early September I'm going to try and get the reavers fully painted for it.