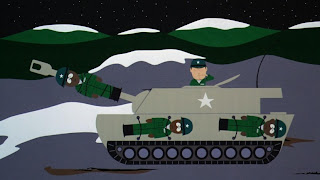 Let's clear something up straight away. In this case when I say "tank" I don't mean your rhinos, hammerheads, predators etc. Instead I'm talking about a video-gaming concept from MMORPGs. For those of you not familiar with this concept the idea is that someone builds their character so that it's primary function is to soak up damage from enemies to protect other units. Though they might not have much offensive ability they can free up points so that other units can spend them on offensive capability.

So how does this apply to 40K? Well before 6th edition it didn't. However, the 6th edition rules have changed wound allocation in such a way as this is now possible. Couple in the "Look Out Sir" rules and there's your tank. The units that will benefit most from this are those static gun-line portions of your army.

Let's take a look at long fangs for example. The standard unit consists of 4-5 missile launcher guys and a squad leader. In 5th edition most people applied wounds to the pack leader first so that there was no loss of offensive capability. Losing split fire isn't too much of a problem so it was a reasonable sacrifice. This is still possible in 6th edition by putting the pack leader at the front. However, with save groups it won't be long before you're losing those precious missile launchers.

This is where wolf guard can save the day. For a basic cost of 33pts you can get a wolf guard with terminator armour and attach him to the long fang pack. Since his save is different you have to assign all the wounds to him until he fails one. After that you apply them to the long fangs as normal. This means that you could theoretically take AP3 hits that would've killed long fangs and prevent them from being touched at all. We all know from experience that terminator saves seem to go one of two ways. Either you seem to pass them all day long or you fail them in record numbers. Obviously, statistically you should be failing 1/6 but sometimes it seems a lot better or a lot worse!

This idea alone would allow you to keep your long fangs alive longer but if we throw in LOS saves we can really keep the "tank" going. Since Wolf Guard count as Characters, for every roll of 1 you make you can apply it to another model on a 4+. This is where the pack leader steps in. Obviously this will kill him off but you'll have maintained your tank. Once he's gone you've then got to make a decision about whether you want to keep the tank alive or sacrifice a missile guy for it. This decision becomes a lot easier if your Wolf Guard has a cyclone launcher. Obviously you're going to sacrifice a power armoured single shot missile to keep a double shot terminator alive.

In theory you could apply this concept to gun-line grey hunters. By taking the full 10 with two plasma guns and a wolf guard in terminator armour (with a claw perhaps?) you can sit them on an objective and keep taking 2+ saves on the terminator while he shoots his storm bolter along with the rest of the boys.

Let's look at another Space Wolves unit, Thunderwolf Cavalry. The problem with this unit in 6th edition is that you can no longer allocate wounds in such a way as to keep the maximum number of models alive before you start removing them. By taking a thunderlord we can play the tanking game with these guys too and with LOS we can do wound allocation again. By spending 20 points to give the lord Runic Armour and hence a 2+ save (don't forget the 5++ to psychic too) we can keep them safe from AP3 shooting. If you fail a save you can still LOS it but because the lord is an Independent Character it's 2+ instead of 4+ to re-allocate the wound. This means we can start to apply a single wound to each of the rest of the squad like we used to and keep the whole unit alive as long as possible.

There are two problems with this strategy. Firstly it relies on the 2+ model being at the front. Whilst this is easy with long fangs who are mostly going to sit at the back it's a lot harder with the TWC as once they're towards the centre of the field it's tricky to keep the lord to the front when you take all the angles of fire into account. Secondly this idea falls down once you hit combat. Whilst you can still do it to an extent it's not as easy as it is with shooting.

I hope this concept makes sense to people and I've not been to patronising along the way! I've got a few posts like this that I want to put up. The 6th edition ruleset hasn't made too many huge changes but the subtle ones force you to rethink the way you play.
Posted by From The Fang at 10:12:00