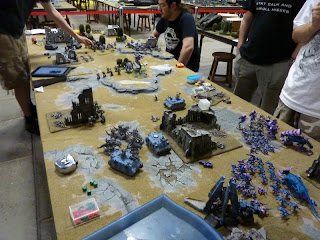 After two crushing defeats at Summer Skirmish to my Dark Eldar (sorry about that), Graham from Claws & Fists was keen to play a rematch against my Space Wolves. I'd managed to avoid the clash in the penultimate round but the final battle saw me pitted against him. On the adjacent table another epic clash between Space Wolves and Tyranids was being played out. The battles would determine who was the ultimate victor on the day, xenos or the mighty Imperium of Man.

However, with 3 hours to play 2,000pts, Graham and I decided to take things easy and allowed ourselves some time for a chat over a consolatory cupcake. We sat eating our baked treats and mocked the top table players for taking things so seriously. Then after sticky fingers had been cleansed we were able to think about starting to maybe have a battle! My 2,000pt list was very similar to the 1,500pt one but for the addition of my Thunderlord (Thorgrim Darksteed) and his thunderwolf cohort. The game was Seize Ground on Spearhead deployment. Graham had a (from memory), 2 hive tyrants, 2 tervigons, 4 raveners, 2 zoanthropes, 2 more zoanthropes in a spore pod, Doom of Malantai in a spore pod, plenty of "dogs" or termagaunts to the rest of us and a crap load of genestealers.

Space Wolves vs Tyranids (2000pts)
Graham won the roll off and placed all of his nids right up against the edge of his deployment zone ready to charge forward and into my lines. The only things in reserve were the pods. I deployed similarly aggressively with the exception of my long fangs who were towards the back of course. With the stage set for an epic conflict I rolled to seize and pulled it off! 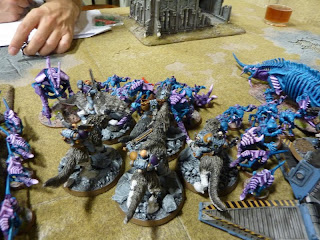 I piled all three rhinos forward and brought my lone wolf and thunderwolves in close by. The drop pod landed right next to the front of Graham's lines. The dreadnought inside incinerated 7 termagaunts and caused a wound on one of the raveners. The rune priest then fired off murderous hurricane at the same raveners causing more wounds. The other rune priest set himself up for a dirty Jaws attack which lined up 4 chunky tyranid models including one of the tyrants. The only monster to fall was the tervigon which was the target all along. The long fangs hammered missiles into the zoanthropes and both failed their invulnerable saves vanishing in a puff of gore. The other long fangs scored wounds on one of the tyrants. Then, thanks to the deployment I was able to get off a first turn thunderwolf charge and slammed into the raveners but only the lord was in reach. He pass 5/6 to hit rolls but fluffed 4 wounding rolls meaning only a single ravener fell. Luckily for me there were no return blows. 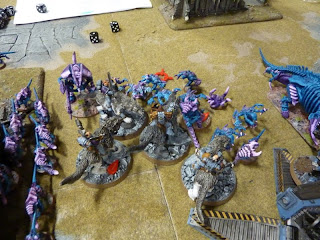 Graham responded by charging most of his force at the thunderwolves. A tyrant, lots of termagaunts, a pile of genestealers and the raveners all let rip at their various initiative levels. All of Graham's attacks were on the squad so it wasn't long before the lord found himself in a very lonely position. The tervigon and genestealers tried to bring down the dreadnought but struggled allowing him to claim a few wounds on the tervigon in return. Elsewhere the grey hunters rapid fired into a genestealer brood causing heavy casualties. The Doom landed and killed 6 grey hunters instantly bringing him upto a maximum 10 wounds. 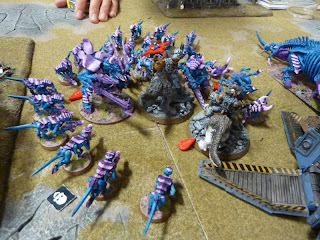 As the epic combat continued I charged into the zoanthropes who had arrived in their pod bringing them down over a couple of combat phases. The Doom passed ALL of his invulnerable saves against the krak missile barrage of two long fang packs. In response the genestealers charged one of the packs killing off a couple of the missile launchers but the wolf guard and squad leader conspired to finish them off a turn later.


The thunderlord thinned the genestealers out and kept on passing 3+ saves to stay in the fight. With genestealers taking out one of the grey hunter packs and the other dying to a swarm of termagaunts I was left with a single objective claiming unit. Luckily for me the tervigon stop spawning termagaunts. The Doom finally succumbed to missile fire as did the other tyrant. The grey hunters secured the central objective but with the tervigon sitting pretty on the other I'd need to win the combat to claim victory. With the news that the other games had finished and the xenos scum had the lead my thunderlord had it all to do. 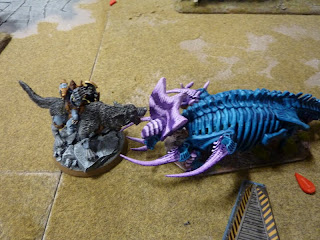 The long fangs cleared up the remaining spore pods so everything Graham had left was now in combat with my thunderlord. Not wanting to risk losing my only remaining troops I had to hope he'd win through. I didn't fancy my chances when the tervigon also waded in though. Miraculously I continued to pass a sickening number of 3+ and 3++ saves to keep him in the fight. Having taken down the smaller stuff he was left with the tyrant and tervigon to deal with.

Thorgrim claimed the remaining wound from the tyrant in my turn 5 (remember we started this in turn 1!) and in Grahams turn he looked towards the tervigon who had 2 wounds remaining. With 3+ to hit and re-rolling 5+ to wound I had no trouble seeing off the remaining monstrous creature to complete the tabling. An epic combat which will go down in the sagas of the Space Wolves for all time!

Conclusion
Credit to Graham for keeping a smile on his face as he took off handfuls of models throughout the game and not throttling me when I kept making saves on the thunderlord. After a couple of disappointing battles against opponents I'd have struggled to beat on a good day it was refreshing to play such a fun game. Overall the battle between xenos and the Imperium ended in a tie which I'm sure will please GW if no-one else!
Posted by From The Fang at 18:00:00