Continuing with the look through the new Eldar codex we're onto the Troops section. Actually the smallest of the bulging FOC slots, there's still 5 units to choose from here. Bear in mind you can look at taking wraithguard and wraithblades if you've gone for a spiritseer but I'll talk about them in Elites. There's also the small matter of the wave serpent.... 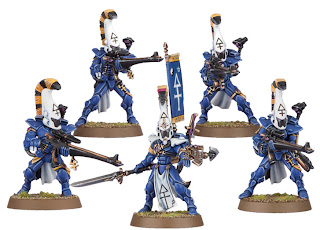 Rules aside, the biggest problem with Dire Avengers at the moment is the disgusting rise in price. They've effectively doubled in price now as you get 5 in a box instead of 10.

They're still a 4+ save and benefit from 18" shuriken catapults which is a significant improvement over the guardian ones. That means Battle Focus can prevent them from ever being in range of an enemy who wants to charge or shoot two shots with Rapid Fire weapons. Strangely they also gained Counter-attack which doesn't totally make sense for a shooty unit. Sadly they've lost the previous codex version of Bladestorm (I wish they'd come up with new names when they change a rule) which allowed them unleash a hail of fire in exchange for not shooting next turn.

They're not bad for their points but the main reason we'll see them is that they're the cheapest way for people to get their hands on the excellent wave serpent.

Guardian Defenders
A single point more expensive than their old codex predecessors, they've gained BS/WS 4 and Initiative 5 which is a bargain. This BS increase is a significant one throughout the whole codex as it means all of the tanks, jetbikes, etc are now BS4. However, the defenders unit hasn't changed a lot otherwise. You can still take a Relentless heavy weapon which are similar in price to before. The key thing here is that it's now an option rather than a compulsory choice.

Not especially brilliant on their own as their weapons are only 12" range which is frankly nothing. Essentially you choose between 10 guardians for 90pts or 5 dire avengers for 65pts. Is it worth trading in 5 guardians to gain 6" range, 4+ saves and losing the option to add a warlock. Time will tell but for most it'll be about saving points rather than comparative effectiveness.

Storm Guardians
Like their defender cousins they've got an improved statline for a minimal increase in points. Their special weapons are slightly cheaper now. Realistically though they're a poor assault unit in what is a particularly shooty game at the moment. Add in the lack of assault vehicles and I really don't see why you'd take them over defenders. 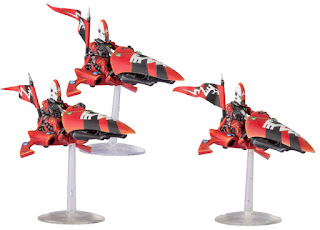 The big winners of the codex and probably the most common troop choice in the new book. A huge 5pt cost reduction to gain I5, BS/WS 4 and true toughness 4. They're an absolute bargain when you consider a character pays 15pts for a jetbike and they're only 17pts each! Despite GW refusing to update the models they'll still be shifting a crapload of the old ones. All they need to do then is update them so they look gorgeous and people will shell out again to update their armies. Genius.

Essentially you're paying 17pts for a highly mobile I5 space marine. Their lack of range isn't as much of an issue when they're so mobile. When you think about it they're actually probably better than space marine bikers which you pay 10pts more for in the Dark Angels book!

Throw in a warlock for either a near permanent 3+ cover save or if you're lucky enough to roll Protect, a 2+ armour save.

Rangers
Same as they ever were but requiring a special character to be upgraded to pathfinders. Still, paying 60pts for an infiltrating troop unit with Stealth is pretty cheap. They'll probably be taken as token scoring units but with a 5+ save and T3 they're still easy fodder for flamers so I'm not sure I'll be bothering.

Alaitoc Pathfinders are 25pts each and despite being able to choose their target I'm not sure they justify their cost. At sub-2K points I'm not sure I'd be prepared to spend a huge chunk of my points on Illic and even 5 pathfinders. 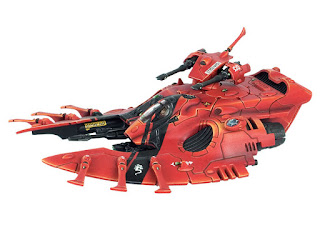 I'm willing to bet that most people did the same as I did when they flicked through the codex and thought the wave serpent seemed overpriced for an AV12 transport. Frankly it is but you don't have to think about it like that. It's a battle tank that happens to have some seats.

It's slightly more expensive than the old codex version although some loadouts are actually significantly cheaper. I'd actually say it's cheaper all round when you consider it's now BS4. However, what I overlooked at first was the Serpent Shield assuming it would be the same as the Energy Field in the old book. How wrong could I be?

Whilst it can help keep the wave serpent alive by converting penetrating hits to glances, the main use will be the gun. AV12 is already pretty good in the current meta and a lot of the time the conversion won't help you. For 130pts you get a wave serpent with twin-linked scatter lasers and a shuriken cannon. It could be argued that the shuriken cannon is a waste since you can only fire two weapons when moving at Cruising Speed but I think it's worth it for when you only move 6". When you do, you can fire 4 scatter laser shots, 3 shuriken cannon shots and then D6+1 S7 shots from the "shield" which are probably twin-linked thanks to the scatter lasers. That's a disgusting amount of firepower for a transport. Throw in that the S7 shots are pinning and ignore cover and you can put out some real hurt.

You could easily run 6 dire avenger squads with wave serpents in a sub-2K list. They only cost you 1,170pts and you're putting out 42 S6 shots and 6xD6 S7 shots from the troops section! That's better than those horrible Grey Knights lists back in 5th! Each transport will average between 7 and 8 wounds on MEQ and would worry most vehicles, including some of the flyers.

Conclusion
Essentially the choice here is a play-style one again. You're most likely to run either a mechanised force or a jetbike based one. As with most armies, the choice you make here will shape how the rest of the army is selected as you'll want units that complement your style of army.

The wave serpent could be the one unit from the new books that pushes us back to a 5th edition style mech-spam meta. The currently foot slogging lists will really struggle against all of that S6/S7 fire power and plasma won't be enough to deal with AV12 in abundance. Looking at my current Tau list I'm pretty sure I wouldn't have a hope against wave serpent spam. Kelly has again brought a game changing unit as he did with the Heldrake which forced people to really think about anti-air. If you can't deal with AV12 you better pray you don't meet an Eldar player.